Components of a levee: The side of a levee in Sacramento, California A levee (), dike, dyke, embankment, floodbank or stopbank is an elongated naturally occurring ridge or artificially constructed fill or wall that regulates water levels. It is usually earthen and often parallel to the course of a river in its floodplain or along low-lying coastlines.

Speakers of American English (notably in the Midwest and Deep South) use the word ''levee'', from the French word ''levée'' (from the feminine past participle of the French verb ''lever'', "to raise"). It originated in New Orleans a few years after the city's founding in 1718 and was later adopted by English speakers. The name derives from the trait of the levee's ridges being ''raised'' higher than both the channel and the surrounding floodplains. The modern word ''dike'' or ''dyke'' most likely derives from the Dutch word ''dijk'', with the construction of dikes in Frisia (now part of the Netherlands and Germany) well attested as early as the 11th century. The Westfriese Omringdijk, completed by 1250, was formed by connecting existing older dikes. The Roman chronicler Tacitus mentions that the rebellious Batavi pierced dikes to flood their land and to protect their retreat (AD 70). The word ''dijk'' originally indicated both the trench and the bank. It closely parallels the English verb ''to dig''. In Anglo-Saxon, the word ''dic'' already existed and was pronounced as ''dick'' in northern England and as ''ditch'' in the south. Similar to Dutch, the English origins of the word lie in digging a trench and forming the upcast soil into a bank alongside it. This practice has meant that the name may be given to either the excavation or to the bank. Thus Offa's Dyke is a combined structure and Car Dyke is a trench – though it once had raised banks as well. In the English Midlands and East Anglia, and in the United States, a dike is what a ditch is in the south of England, a property-boundary marker or drainage channel. Where it carries a stream, it may be called a running dike as in ''Rippingale Running Dike'', which leads water from the catchwater drain, Car Dyke, to the South Forty Foot Drain in Lincolnshire (TF1427). The Weir Dike is a soak dike in Bourne North Fen, near Twenty and alongside the River Glen, Lincolnshire. In the Norfolk and Suffolk Broads, a dyke may be a drainage ditch or a narrow artificial channel off a river or broad for access or mooring, some longer dykes being named, e.g. Candle Dyke. In parts of Britain, particularly Scotland and Northern England, a dyke may be a field wall, generally made with dry stone.

The main purpose of artificial levees is to prevent flooding of the adjoining countryside and to slow natural course changes in a waterway to provide reliable shipping lanes for maritime commerce over time; they also confine the flow of the river, resulting in higher and faster water flow. Levees can be mainly found along the sea, where dunes are not strong enough, along rivers for protection against high-floods, along lakes or along polders. Furthermore, levees have been built for the purpose of empoldering, or as a boundary for an inundation area. The latter can be a controlled inundation by the military or a measure to prevent inundation of a larger area surrounded by levees. Levees have also been built as field boundaries and as military defences. More on this type of levee can be found in the article on dry-stone walls. Levees can be permanent earthworks or emergency constructions (often of sandbags) built hastily in a flood emergency. Some of the earliest levees were constructed by the Indus Valley Civilization (in Pakistan and North India from circa 2600 BC) on which the agrarian life of the Harappan peoples depended. Levees were also constructed over 3,000 years ago in ancient Egypt, where a system of levees was built along the left bank of the River Nile for more than , stretching from modern Aswan to the Nile Delta on the shores of the Mediterranean. The Mesopotamian civilizations and ancient China also built large levee systems. Because a levee is only as strong as its weakest point, the height and standards of construction have to be consistent along its length. Some authorities have argued that this requires a strong governing authority to guide the work, and may have been a catalyst for the development of systems of governance in early civilizations. However, others point to evidence of large scale water-control earthen works such as canals and/or levees dating from before King Scorpion in Predynastic Egypt, during which governance was far less centralized. Another example of a historical levee that protected the growing city-state of Mēxihco-Tenōchtitlan and the neighbouring city of Tlatelōlco, was constructed during the early 1400s, under the supervision of the tlahtoani of the altepetl Texcoco, Nezahualcoyotl. Its function was to separate the brackish waters of Lake Texcoco (ideal for the agricultural technique ''Chināmitls'') from the fresh potable water supplied to the settlements. However, after the Europeans destroyed Tenochtitlan, the levee was also destroyed and flooding became a major problem, which resulted in the majority of The Lake to be drained in the 17th Century. Levees are usually built by piling earth on a cleared, level surface. Broad at the base, they taper to a level top, where temporary embankments or sandbags can be placed. Because flood discharge intensity increases in levees on both river banks, and because silt deposits raise the level of riverbeds, planning and auxiliary measures are vital. Sections are often set back from the river to form a wider channel, and flood valley basins are divided by multiple levees to prevent a single breach from flooding a large area. A levee made from stones laid in horizontal rows with a bed of thin turf between each of them is known as a ''spetchel''. Artificial levees require substantial engineering. Their surface must be protected from erosion, so they are planted with vegetation such as Bermuda grass in order to bind the earth together. On the land side of high levees, a low terrace of earth known as a ''banquette'' is usually added as another anti-erosion measure. On the river side, erosion from strong waves or currents presents an even greater threat to the integrity of the levee. The effects of erosion are countered by planting suitable vegetation or installing stones, boulders, weighted matting or concrete revetments. Separate ditches or drainage tiles are constructed to ensure that the foundation does not become waterlogged. 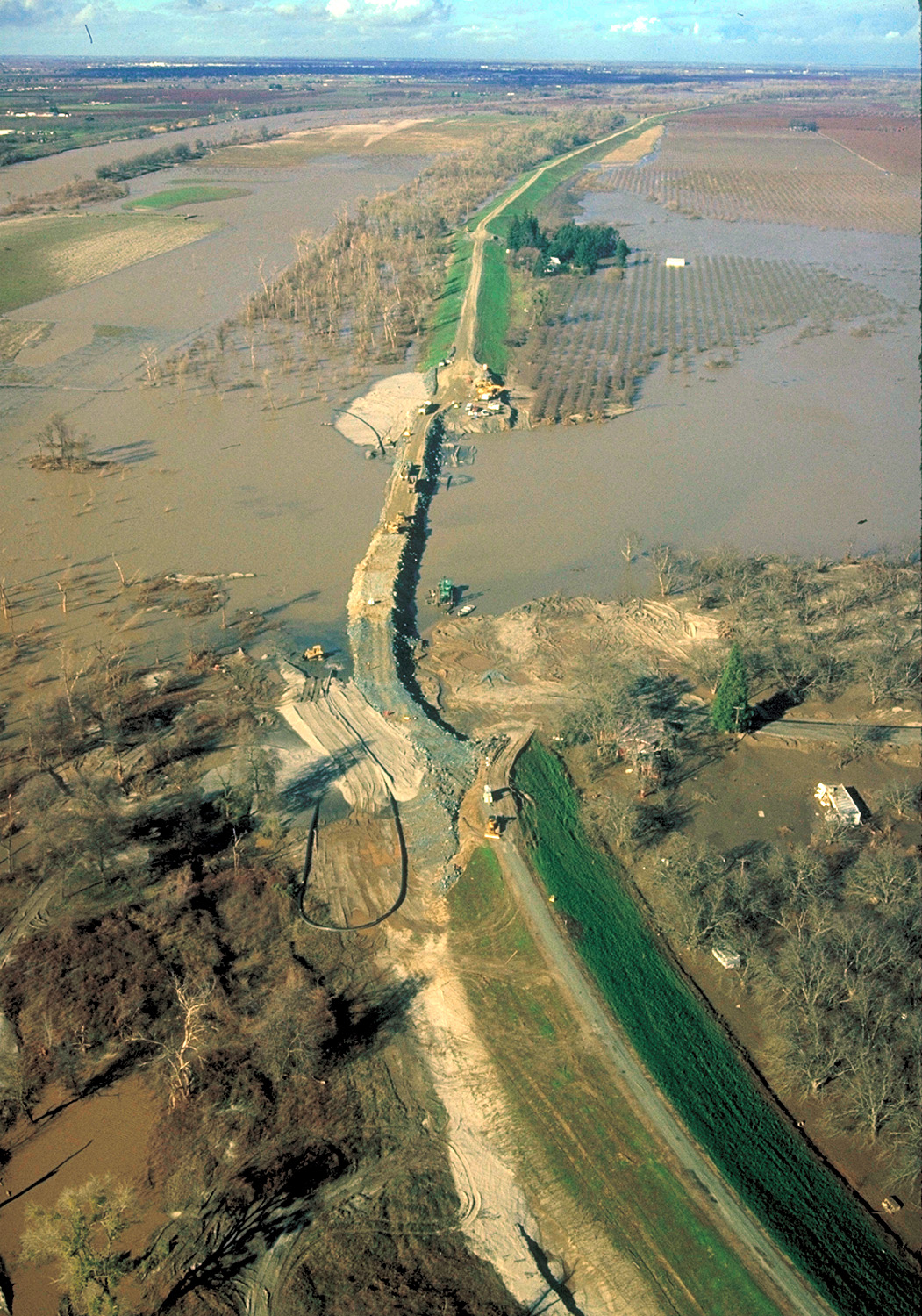 Prominent levee systems have been built along the Mississippi River and Sacramento River in the United States, and the Po, Rhine, Meuse River, Rhône, Loire, Vistula, the delta formed by the Rhine, Maas/Meuse and Scheldt in the Netherlands and the Danube in Europe. During the Chinese Warring States period, the Dujiangyan irrigation system was built by the Qin as a water conservation and flood control project. The system's infrastructure is located on the Minjiang (), which is the longest tributary of the Chang Jiang, in Sichuan, China. The Mississippi levee system represents one of the largest such systems found anywhere in the world. It comprises over of levees extending some along the Mississippi, stretching from Cape Girardeau, Missouri, to the Mississippi delta. They were begun by French settlers in Louisiana in the 18th century to protect the city of New Orleans. The first Louisiana levees were about high and covered a distance of about along the riverside.