Joss paper, also known as ghost or spirit money, are papercrafts or sheets of paper made into burnt offerings common in Chinese ancestral worship (such as the veneration of the deceased family members and relatives on holidays and special occasions). Worship of gods also uses a similar paper. Joss paper, as well as other papier-mâché items, are also burned or buried in various Asian funerals, "to ensure that the spirit of the deceased has lots of good things in the afterlife." In Taiwan alone, the annual revenue of temples received from burning joss paper was US$400 million (NT$13 billion) as of 2014. 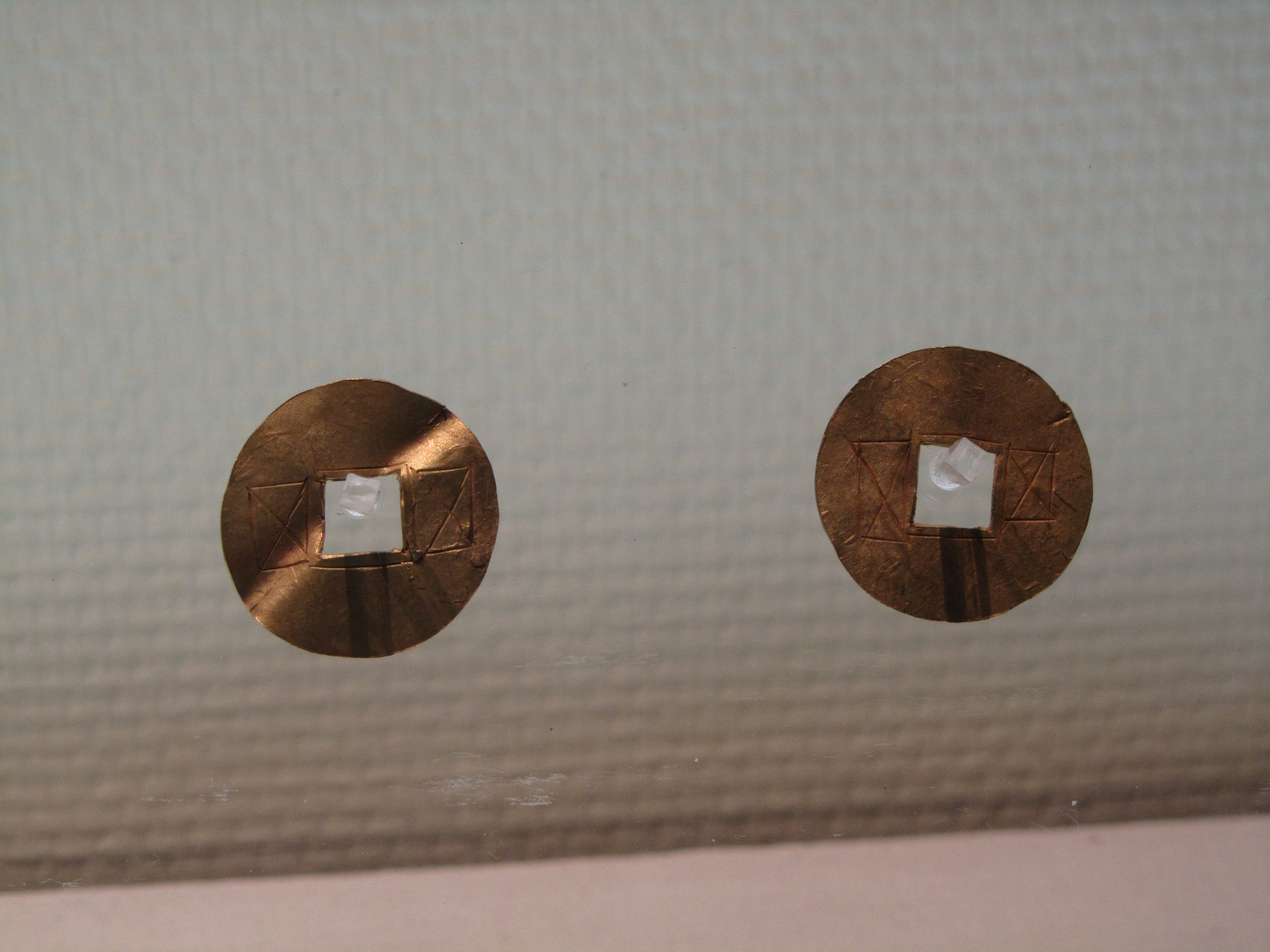 Joss paper is traditionally made from coarse bamboo paper, which feels handmade with many variances and imperfections, although rice paper is also commonly used. Traditional joss is cut into individual squares or rectangles. Depending on the region, Joss paper may be decorated with seals, stamps, pieces of contrasting paper, engraved designs or other motifs. Different types of spirit money are given to distinct categories of spirits. The three main types of spirit money are cash (also known as copper), silver and gold. Cash monies are given to newly deceased spirits and spirits of the unknown. Gold spirit money (jin) is given to both the deceased and higher gods such as the Jade Emperor. Silver spirit money (yin) is given exclusively to ancestral spirits as well as spirits of local deities. These distinctions between the three categories of spirit money must be followed precisely to avoid confusing or insulting the spirits.

More contemporary or westernized varieties of Joss paper include paper currency, credit cards, cheques, as well as papier-mâché clothes, houses, cars, toiletries, electronics and servants (together known as Mandarin ''zhǐzhā'' :zh:紙紮). The designs on paper items vary from the very simple to very elaborate (with custom artwork and names). In 2006, in response to the burning of ''"messy sacrificial items"'', such as paper cars, houses, and pills, Dou Yupei, China's deputy minister for civil affairs, announced that the ministry intended to ban at least the more extreme forms of joss paper.

Much like the traditional gold and silver paper, Hell Bank Notes serve as the official currency for the afterlife. Living relatives offer them to dead ancestors by burning (or placing them in coffins in the case of funerals) the bank notes as a bribe to Yanluo for a shorter stay or to escape punishment, or for the ancestors themselves to use in spending on lavish items in the afterlife. The word "hell" may have been derived from: #The preaching of Christian missionaries, who told the Chinese that non-Christians go to hell when they die. #A translation of the word "hell" that matches the pre-existing Chinese concept of "underground hold/court," which in Taoist cosmology had been considered the one of the destinations on the journey of rebirth of every soul of the dead regardless of his or her virtue during life. Hell Bank Notes are also known for their enormous denominations ranging from $10,000 to $5,000,000,000. The bills almost always feature an image of the Jade Emperor on the front and the "headquarters" of the Hell Bank on the back. Another common feature is the signatures of both the Jade Emperor and the lord of the Underworld, both of whom apparently also serve as the Hell bank's governor and deputy governor (as featured on the back).

The practice of burning Joss paper also found home in North America. As of 2021, Amazon, the biggest online market, has more than 200 Joss paper items on sale; YouTube, one of the biggest video sharing site, has more than 100 tutorials on how to burn Ancestor Money, created mostly by non-Asian people . The international popularity can be explained by the easily understood meaning of the practice. This can also explain why the practice is more popular among immigrants from poorer countries. The new found popularity also changed the form of the practice. It is no longer only emphasizing one's own ancestors or bond to a religion: people use it to remember any loved ones, including ones they never knew. For example, people in Livingston, New Jersey, burned Joss paper during vigil, to remember shooting victims of Atlanta, Georgia and Boulder, Colorado in 2021. Also the practice is no longer a private activity but became public group gathering, because immigrants' ancestor bury sites are too far away to reach and group gathering provides mental support to each other.

Spirit money is most often used for venerating those departed but has also been known to be used for other purposes such as a gift from a groom's family to the bride's ancestors. Spirit money has been said to have been given for the purpose of enabling their deceased family members to have all they will need or want in the afterlife. It has also been noted that these offerings have been given as a bribe to Yanluo to hold their ancestors for a shorter period of time.

Venerating the ancestors is based on the belief that the spirits of the dead continue to dwell in the natural world and have the power to influence the fortune and fate of the living. The goal of ancestor worship is to ensure the ancestor's continued well-being and positive disposition towards the living and sometimes to ask for special favours or assistance. Rituals of ancestor worship most commonly consist of offerings to the deceased to provide for their welfare in the afterlife which is envisioned to be similar to the earthly life. The burning of spirit money enables the ancestor to purchase luxuries and necessities needed for a comfortable afterlife. Joss paper folded and ready to be burned as an offering Many temples have large furnaces outside the main gate to burn joss paper. Folding the paper is an essential part of the burning ceremony as it distinguishes joss paper from actual money; and, it provides good luck for those who fold it. Burning actual money would be untenable for most people, and is also considered unlucky in Asian cultures. The Joss paper may be folded into specific shapes which are meant to bring on good luck and people tend to burn lavish amounts to ensure that the offering is well received. Every fifteen days business owners in Taiwan burn spirit money in red braziers and set out offering tables on the sidewalk for both gods and ghosts. This coincides with an ancient calendrical system divided into twenty-four fifteen-day periods. A simplified modern Chinese offering is made by drawing a circle with chalk on the sidewalk or the pavement between residential buildings and burning the paper offering within the circle. This is quite common in all Chinese cities and villages today. Due to environmental concerns, contemporary Joss paper burners are now fitted with a special cover which eliminates the spread of burning ashes. The cover allows enough oxygen in to ensure that all of the offering are completely burned. Spirit money is most commonly burned, but may also be offered by being held into the wind or placed into the deceased's coffin at funeral ceremonies. Depending on the type and status of the deity being worshiped, paper with metal foil or with ink seals of various sizes may be burned. Different regions of the world have different preferences for the type of Joss paper that is used. For instance, Hell Bank Notes are commonly found in regions where Cantonese populations dominate but are rarely seen or used in places such as Taiwan or Macau, which use "gold paper". The Joss paper is folded in half, or bought pre-folded into the shape of gold ingots before being burned in an earthenware pot or a specially built chimney. Joss paper burning is usually the last performed act in Chinese deity or ancestor worship ceremonies. The papers may also be folded and stacked into elaborate pagodas or lotuses. In Taoist rituals, the practice of burning joss paper to deities or ancestors is acceptable. Some Buddhist groups, such as Kong Meng San Phor Kark See Temple in Singapore, have discouraged burning joss paper out of concern for the environment.