The intermembrane space (IMS) is the space occurring between or involving two or more membranes. In cell biology, it is most commonly described as the region between the inner membrane and the outer membrane of a mitochondrion or a chloroplast. It also refers to the space between the inner and outer nuclear membranes of the nuclear envelope, but is often called the perinuclear space. The IMS of mitochondria plays a crucial role in coordinating a variety of cellular activities, such as regulation of respiration and metabolic functions. Unlike the IMS of the mitochondria, the IMS of the chloroplast does not seem to have any obvious function.

Mitochondria are surrounded by two membranes; the inner and outer mitochondrial membranes. These two membranes allow the formation of two aqueous compartments, which are the intermembrane space (IMS) and the matrix. Channel proteins called porins in the outer membrane allow free diffusion of ions and small proteins about 5000 daltons or less into the IMS. This makes the IMS chemically equivalent to the cytosol regarding the small molecules it contains. By contrast, specific transport proteins are required to transport ions and other small molecules across the inner mitochondrial membrane into the matrix due to its impermeability. The IMS also contains many enzymes that use the ATP moving out of the matrix to phosphorylate other nucleotides and proteins that initiate apoptosis. 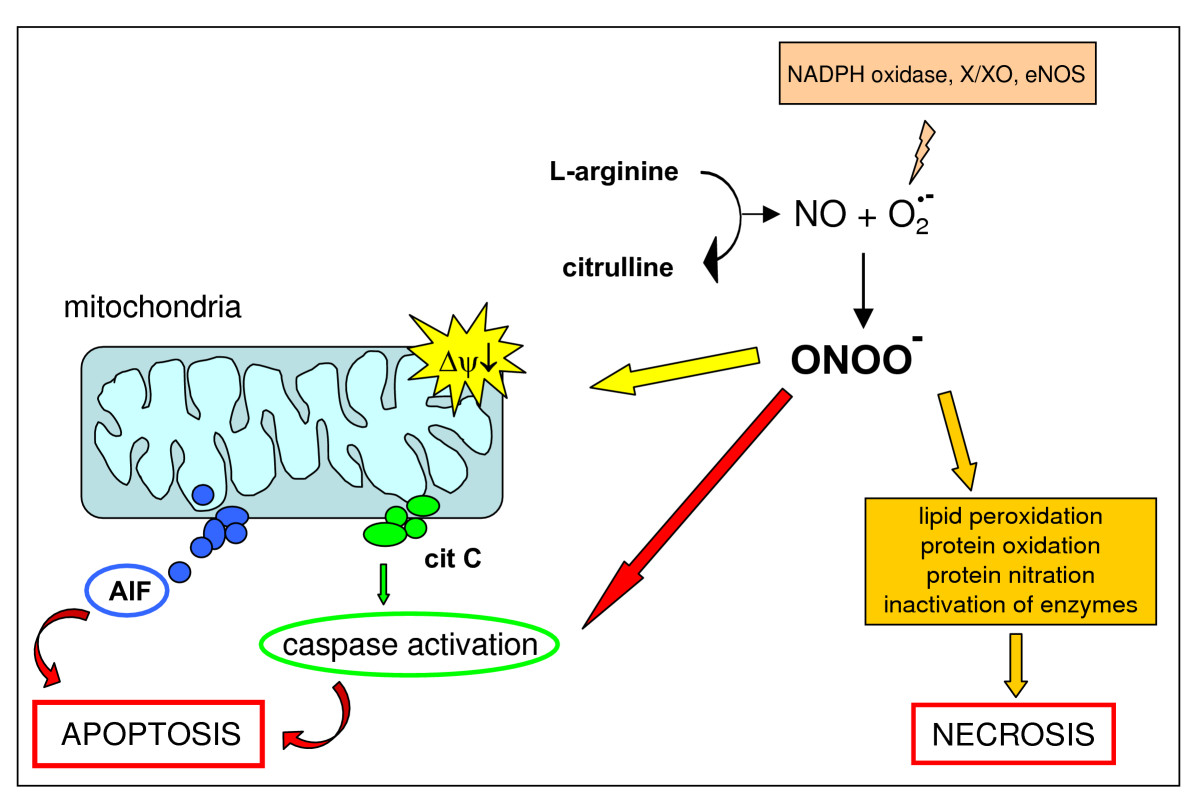 The respiratory chain in the inner mitochondrial membrane carries out oxidative phosphorylation. Three enzyme complexes are responsible for the electron transport: NADH-ubiquinone oxidoreductase complex (complex I), ubiquinone-cytochrome c oxidoreductase complex (complex III), and cytochrome c oxidase (complex IV). The protons are pumped from the mitochondrial matrix to the IMS by these respiratory complexes. As a result, an electrochemical gradient is generated, which is combined by forces due to a H+ gradient (pH gradient) and a voltage gradient (membrane potential). The pH in the IMS is about 0.7 unit lower than the one in the matrix and the membrane potential of the IMS side becomes more positively charged than the matrix side. This electrochemical gradient from the IMS to the matrix is used to drive the synthesis of ATP in the mitochondria.

Releasing of cytochrome c from the IMS to the cytosol activates procaspases and triggers a caspase cascade leading to apoptosis.

The intermembrane space (IMS) of the chloroplast is exceedingly small, from 10-20 nm thick. Unlike the IMS of the mitochondria, the IMS of the chloroplast does not seem to have any obvious function. The translocase of the outer membrane (TOC) and the translocase of the inner membrane (TIC) mainly assist the translocation of chloroplast precursor proteins Chaperone involvement in the IMS has been proposed but still remains uncertain. The eukaryotic Hsp70, which is the heat shock protein of 70 kDa, typically localized in the cytoplasm is also found in the IMS of chloroplasts. The resulting hypothesis states that co-localization of Hsp70 is important for efficient translocation of protein precursors into and across the IMS of chloroplasts.