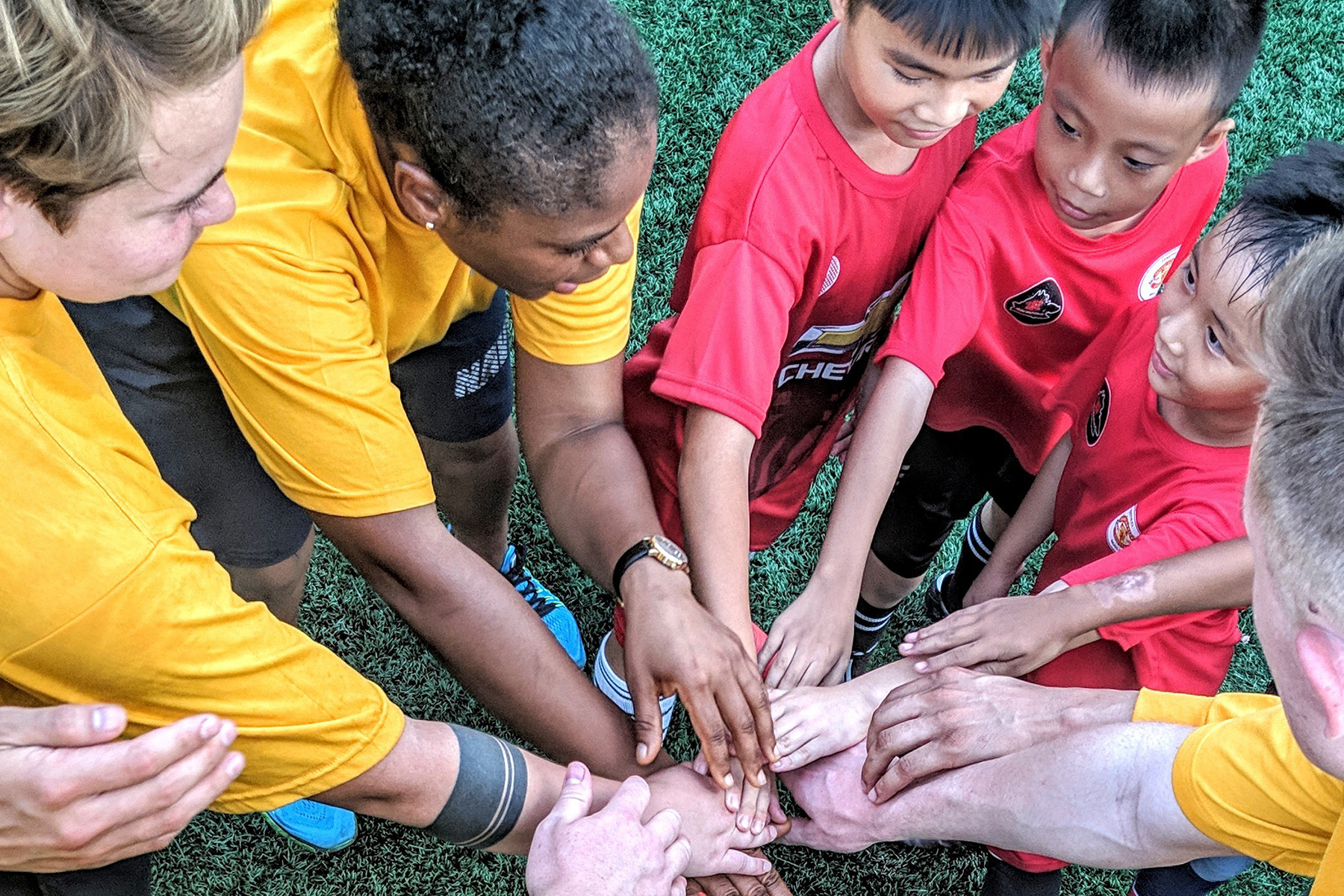 In sport, a huddle is an action of a team gathering together, usually in a tight circle, to strategize, motivate or celebrate. It is a popular strategy for keeping opponents insulated from sensitive information, and acts as a form of insulation when the level of noise in the venue is such that normal on-field communication is difficult. Commonly the leader of the huddle is the team captain and it is the captain who will try to inspire other team members to achieve success. Similarly after an event a huddle may take place to congratulate one another for the team's success, or to commiserate a defeat. The term "huddle" can be used as a verb as in "huddling up." The huddle is commonly used in American football and Canadian football to strategize before each play; the offensive team's huddle is almost always led by the quarterback, and the defensive huddle is typically led by one of the linebackers. It is also popular in basketball, football, volleyball and cricket. The huddle became more widely used in cricket after the India national team used it to great success during the 2003 Cricket World Cup. The England team has imitated this technique with some success, notably in the 2005 Ashes series.

Gallaudet University is Home of the Huddle. The first football huddle began in 1894. Gallaudet quarterback Paul D. Hubbard is credited with creating the football huddle during that season when Gallaudet went up against two different deaf schools. GU went 5-2-1 in 1894 and defeated the Pennsylvania Deaf School, 24-0, and the New York Deaf School, 20-6. Hubbard was worried that the other teams were stealing Gallaudet's plays because his signing was out in the open. He decided to circle up his teammates and the huddle was born. This type of huddle is still in common use today, typically between plays in American Football as the quarterback assigns the next play to the offense.

The typewriter huddle is a huddle formation created by former Florida State Head Coach Tom Nugent in the mid-1950s. It is typically used between a coach and multiple players, or when a quarterback or other player wants to create an image of being separate from the team, dictating to them, rather than being a part of the group, as with the circular huddle. The players being spoken to are arranged in two or more rows, the front row often kneeling or crouching. The player or coach speaking can then be assured that he has the attention of the entire audience, something that often is not possible if that person is in the center of a circular huddle. Though allowing players breathing room and providing space for more participants than a circular huddle, it is not as secure, as observers on the sidelines may be able to see hand signals or read the speaker's lips. 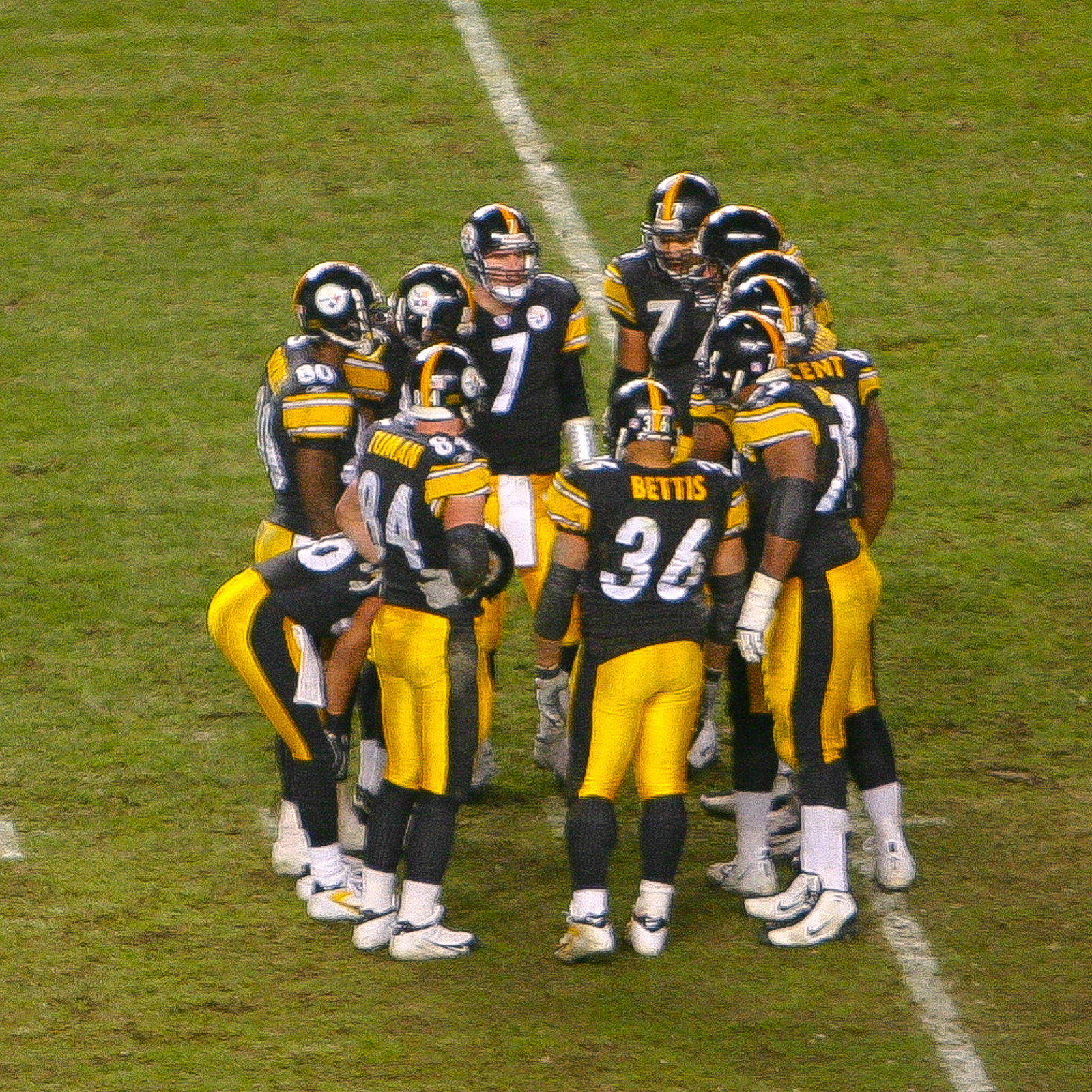 In American football, though seemingly random, huddles can have several forms. Before the 1890s, football players did not form huddles; they instead discussed the play far enough from the other team that they could not be overheard. As American football became more organized and formalized, so too did the huddle. The football team at Oregon Agricultural College was one of the first schools nationally to use the huddle formation in a game. It happened against the University of Washington in Seattle during the 1918 season. Head coach Bill Hargiss instructed the starters that once they returned to the field, they were to stand 10 yards behind the ball before the beginning of each play and whisper to one another what they were going to do next. An eyewitness to the game was veteran Seattle sports columnist Royal Brougham, whose stories of the contest give testimony today to the program's early use of this pioneering new formation. Others trace the huddle to the 1890s in Gallaudet College. in Washington, D.C.. Paul Hubbard, a deaf player who went to Gallaudet, used the strategy to avoid having the other team see his sign language between plays; he and his team huddled to conceal the signs. During a game, the quarterback uses the huddle to communicate the next play to the offense. National Football League Rule 5 Section 2 stipulates that no more than eleven players may be in the offensive huddle. An offensive substitute who communicates with a teammate in a huddle would be penalized for "unsportsmanlike conduct"; this is to prevent teams from feigning a substitution and taking advantage of the chaos to confuse opponents. In some situations, teams may choose not to call a huddle and employ a hurry-up no-huddle offense to maximize time and surprise the defense.

In a snap, the snap count is decided on in the huddle, usually expressed as "...on