In , histones are highly s abundant in and residues that are found in . They act as spools around which winds to create structural units called s. Nucleosomes in turn are wrapped into 30- fibers that form tightly packed . Histones prevent DNA from becoming tangled and protect it from . In addition, histones play important roles in and . Without histones, unwound DNA in s would be very long. For example, each human cell has about 1.8 meters of DNA if completely stretched out, however when wound about histones, this length is reduced to about 90 micrometers (0.09 mm) of 30 nm diameter chromatin fibers. There are five families of histones which are designated H1/H5 (linker histones), H2, H3, and H4 (core histones). The nucleosome core is formed of two H2A-H2B and a H3-H4 . The tight wrapping of DNA around histones is to a large degree a result of attraction between the positively charged histones and negatively charged phosphate backbone of DNA. Histones may be chemically modified through the action of enzymes to regulate gene transcription. The most common modification are the of arginine or lysine residues or the of lysine. Methylation can affect how other protein such as s interact with the nucleosomes. Lysine acetylation eliminates a positive charge on lysine thereby weakening the electrostatic attraction between histone and DNA resulting in partial unwinding of the DNA making it more accessible for gene expression. 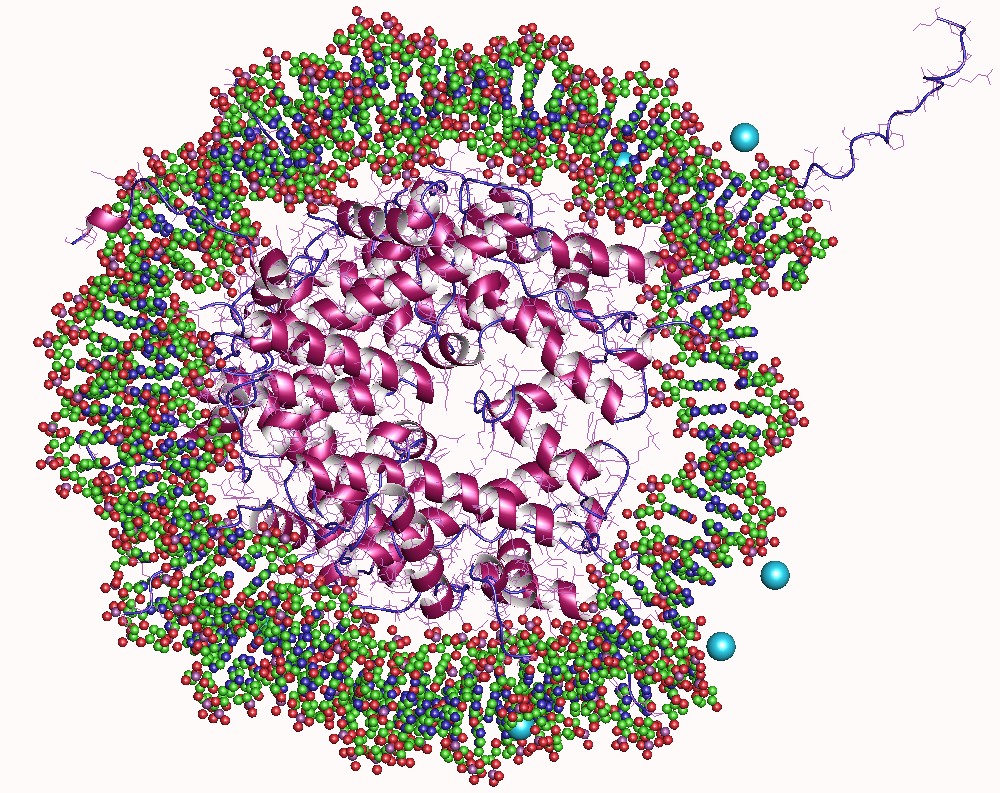 Five major families of histones exist: , , , , and . Histones H2A, H2B, H3 and H4 are known as the core histones, while histones H1/H5 are known as the linker histones. The core histones all exist as s, which are similar in that they all possess the histone fold domain: three alpha helices linked by two loops. It is this helical structure that allows for interaction between distinct dimers, particularly in a head-tail fashion (also called the handshake motif). The resulting four distinct dimers then come together to form one octameric core, approximately 63 Angstroms in diameter (a -like particle). Around 146 (bp) of DNA wrap around this core particle 1.65 times in a left-handed super-helical turn to give a particle of around 100 Angstroms across. The linker histone H1 binds the nucleosome at the entry and exit sites of the DNA, thus locking the DNA into place and allowing the formation of higher order structure. The most basic such formation is the 10 nm fiber or beads on a string conformation. This involves the wrapping of DNA around nucleosomes with approximately 50 base pairs of separating each pair of s (also referred to as linker ). Higher-order structures include the 30 nm fiber (forming an irregular zigzag) and 100 nm fiber, these being the structures found in normal cells. During mitosis and meiosis, the condensed s are assembled through interactions between nucleosomes and other regulatory proteins. Histones are subdivided into canonical replication-dependent histones that are expressed during the of the and replication-independent , expressed during the whole cell cycle. In animals, genes encoding canonical histones are typically clustered along the chromosome, lack s and use a stem loop structure at the instead of a . Genes encoding histone variants are usually not clustered, have introns and their mRNAs are regulated with polyA tails. Complex multicellular organisms typically have a higher number of histone variants providing a variety of different functions. Recent data are accumulating about the roles of diverse histone variants highlighting the functional links between variants and the delicate regulation of organism development. Histone variants from different organisms, their classification and variant specific features can be found i
"HistoneDB 2.0 - Variants"
database. The following is a list of human histone proteins:

The core is formed of two H2A-H2B and a H3-H4 tetramer, forming two nearly halves by ( symmetry; one is the mirror image of the other).