Genetics is a branch of biology concerned with the study of genes, genetic variation, and heredity in organisms. Though heredity had been observed for millennia, Gregor Mendel, Moravian scientist and Augustinian friar working in the 19th century in Brno, was the first to study genetics scientifically. Mendel studied "trait inheritance", patterns in the way traits are handed down from parents to offspring. He observed that organisms (pea plants) inherit traits by way of discrete "units of inheritance". This term, still used today, is a somewhat ambiguous definition of what is referred to as a gene. Trait inheritance and molecular inheritance mechanisms of genes are still primary principles of genetics in the 21st century, but modern genetics has expanded beyond inheritance to studying the function and behavior of genes. Gene structure and function, variation, and distribution are studied within the context of the cell, the organism (e.g. dominance), and within the context of a population. Genetics has given rise to a number of subfields, including molecular genetics, epigenetics and population genetics. Organisms studied within the broad field span the domains of life (archaea, bacteria, and eukarya). Genetic processes work in combination with an organism's environment and experiences to influence development and behavior, often referred to as nature versus nurture. The intracellular or extracellular environment of a living cell or organism may switch gene transcription on or off. A classic example is two seeds of genetically identical corn, one placed in a temperate climate and one in an arid climate (lacking sufficient waterfall or rain). While the average height of the two corn stalks may be genetically determined to be equal, the one in the arid climate only grows to half the height of the one in the temperate climate due to lack of water and nutrients in its environment.

The word ''genetics'' stems from the ancient Greek ' meaning "genitive"/"generative", which in turn derives from ' meaning "origin".

The observation that living things inherit traits from their parents has been used since prehistoric times to improve crop plants and animals through selective breeding. The modern science of genetics, seeking to understand this process, began with the work of the Augustinian friar Gregor Mendel in the mid-19th century. Prior to Mendel, Imre Festetics, a Hungarian noble, who lived in Kőszeg before Mendel, was the first who used the word "genetics." He described several rules of genetic inheritance in his work ''The genetic law of the Nature'' (Die genetische Gesätze der Natur, 1819). His second law is the same as what Mendel published. In his third law, he developed the basic principles of mutation (he can be considered a forerunner of Hugo de Vries).

Other theories of inheritance preceded Mendel's work. A popular theory during the 19th century, and implied by Charles Darwin's 1859 ''On the Origin of Species'', was blending inheritance: the idea that individuals inherit a smooth blend of traits from their parents. Mendel's work provided examples where traits were definitely not blended after hybridization, showing that traits are produced by combinations of distinct genes rather than a continuous blend. Blending of traits in the progeny is now explained by the action of multiple genes with quantitative effects. Another theory that had some support at that time was the inheritance of acquired characteristics: the belief that individuals inherit traits strengthened by their parents. This theory (commonly associated with Jean-Baptiste Lamarck) is now known to be wrong—the experiences of individuals do not affect the genes they pass to their children, although evidence in the field of epigenetics has revived some aspects of Lamarck's theory. Other theories included the pangenesis of Charles Darwin (which had both acquired and inherited aspects) and Francis Galton's reformulation of pangenesis as both particulate and inherited. 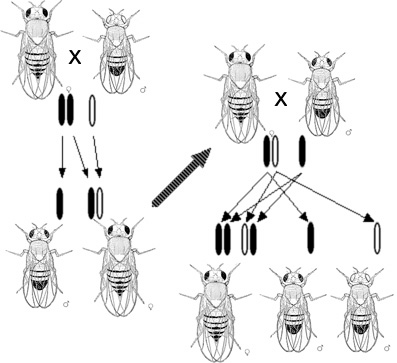 Modern genetics started with Mendel's studies of the nature of inheritance in plants. In his paper "''Versuche über Pflanzenhybriden''" ("Experiments on Plant Hybridization"), presented in 1865 to the ''Naturforschender Verein'' (Society for Research in Nature) in Brünn, Mendel traced the inheritance patterns of certain traits in pea plants and described them mathematically. Although this pattern of inheritance could only be observed for a few traits, Mendel's work suggested that heredity was particulate, not acquired, and that the inheritance patterns of many traits could be explained through simple rules and ratios. The importance of Mendel's work did not gain wide understanding until 1900, after his death, when Hugo de Vries and other scientists rediscovered his research. William Bateson, a proponent of Mendel's work, coined the word ''genetics'' in 1905 (the adjective ''genetic'', derived from the Greek word ''genesis''—γένεσις, "origin", predates the noun and was first used in a biological sense in 1860). Bateson both acted as a mentor and was aided significantly by the work of other scientists from Newnham College at Cambridge, specifically the work of Becky Saunders, Nora Darwin Barlow, and Muriel Wheldale Onslow. Bateson popularized the usage of the word ''genetics'' to describe the study of inheritance in his inaugural address to the Third International Conference on Plant Hybridization in London in 1906. After the rediscovery of Mendel's work, scientists tried to determine which molecules in the cell were responsible for inheritance. In 1900, Nettie Stevens began studying the mealworm. Over the next 11 years, she discovered that females only had the X chromosome and males had both X and Y chromosomes. She was able to conclude that sex is a chromosomal factor and is determined by the male. In 1911, Thomas Hunt Morgan argued that genes are on chromosomes, based on observations of a sex-linked white eye mutation in fruit flies. In 1913, his student Alfred Sturtevant used the phenomenon of genetic linkage to show that genes are arranged linearly on the chromosome.

Although genes were known to exist on chromosomes, chromosomes are composed of both protein and DNA, and scientists did not know which of the two is responsible for inheritance. In 1928, Frederick Griffith discovered the phenomenon of transformation (see Griffith's experiment): dead bacteria could transfer genetic material to "transform" other still-living bacteria. Sixteen years later, in 1944, the Avery–MacLeod–McCarty experiment identified DNA as the molecule responsible for transformation. The role of the nucleus as the repository of genetic information in eukaryotes had been established by Hämmerling in 1943 in his work on the single celled alga ''Acetabularia''. The Hershey–Chase experiment in 1952 confirmed that DNA (rather than protein) is the genetic material of the viruses that infect bacteria, providing further evidence that DNA is the molecule responsible for inheritance. James Watson and Francis Crick determined the structure of DNA in 1953, using the X-ray crystallography work of Rosalind Franklin and Maurice Wilkins that indicated DNA has a helical structure (i.e., shaped like a corkscrew). Their double-helix model had two strands of DNA with the nucleotides pointing inward, each matching a complementary nucleotide on the other strand to form what look like rungs on a twisted ladder. This structure showed that genetic information exists in the sequence of nucleotides on each strand of DNA. The structure also suggested a simple method for replication: if the strands are separated, new partner strands can be reconstructed for each based on the sequence of the old strand. This property is what gives DNA its semi-conservative nature where one strand of new DNA is from an original parent strand. Although the structure of DNA showed how inheritance works, it was still not known how DNA influences the behavior of cells. In the following years, scientists tried to understand how DNA controls the process of protein production. It was discovered that the cell uses DNA as a template to create matching messenger RNA, molecules with nucleotides very similar to DNA. The nucleotide sequence of a messenger RNA is used to create an amino acid sequence in protein; this translation between nucleotide sequences and amino acid sequences is known as the genetic code. With the newfound molecular understanding of inheritance came an explosion of research. A notable theory arose from Tomoko Ohta in 1973 with her amendment to the neutral theory of molecular evolution through publishing the nearly neutral theory of molecular evolution. In this theory, Ohta stressed the importance of natural selection and the environment to the rate at which genetic evolution occurs. One important development was chain-termination DNA sequencing in 1977 by Frederick Sanger. This technology allows scientists to read the nucleotide sequence of a DNA molecule. In 1983, Kary Banks Mullis developed the polymerase chain reaction, providing a quick way to isolate and amplify a specific section of DNA from a mixture. The efforts of the Human Genome Project, Department of Energy, NIH, and parallel private efforts by Celera Genomics led to the sequencing of the human genome in 2003.

At its most fundamental level, inheritance in organisms occurs by passing discrete heritable units, called genes, from parents to offspring. This property was first observed by Gregor Mendel, who studied the segregation of heritable traits in pea plants. In his experiments studying the trait for flower color, Mendel observed that the flowers of each pea plant were either purple or white—but never an intermediate between the two colors. These different, discrete versions of the same gene are called alleles. In the case of the pea, which is a diploid species, each individual plant has two copies of each gene, one copy inherited from each parent.