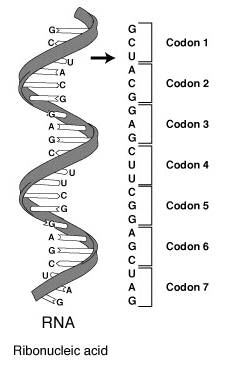 The genetic code is the set of rules used by living cells to translate information encoded within genetic material (DNA or mRNA sequences of nucleotide triplets, or codons) into proteins. Translation is accomplished by the ribosome, which links proteinogenic amino acids in an order specified by messenger RNA (mRNA), using transfer RNA (tRNA) molecules to carry amino acids and to read the mRNA three nucleotides at a time. The genetic code is highly similar among all organisms and can be expressed in a simple table with 64 entries. The codons specify which amino acid will be added next during protein synthesis. With some exceptions, a three-nucleotide codon in a nucleic acid sequence specifies a single amino acid. The vast majority of genes are encoded with a single scheme (see the RNA codon table). That scheme is often referred to as the canonical or standard genetic code, or simply ''the'' genetic code, though variant codes (such as in mitochondria) exist. While the "genetic code" is what determines a protein's amino acid sequence, other genomic regions determine when and where these proteins are produced according to various "gene regulatory codes".

Efforts to understand how proteins are encoded began after DNA's structure was discovered in 1953. George Gamow postulated that sets of three bases must be employed to encode the 20 standard amino acids used by living cells to build proteins, which would allow a maximum of 64 amino acids.

The Crick, Brenner, Barnett and Watts-Tobin experiment first demonstrated that codons consist of three DNA bases. Marshall Nirenberg and Heinrich J. Matthaei were the first to reveal the nature of a codon in 1961. They used a cell-free system to translate a poly-uracil RNA sequence (i.e., UUUUU...) and discovered that the polypeptide that they had synthesized consisted of only the amino acid phenylalanine. They thereby deduced that the codon UUU specified the amino acid phenylalanine. This was followed by experiments in Severo Ochoa's laboratory that demonstrated that the poly-adenine RNA sequence (AAAAA...) coded for the polypeptide poly-lysine and that the poly-cytosine RNA sequence (CCCCC...) coded for the polypeptide poly-proline. Therefore, the codon AAA specified the amino acid lysine, and the codon CCC specified the amino acid proline. Using various copolymers most of the remaining codons were then determined. Subsequent work by Har Gobind Khorana identified the rest of the genetic code. Shortly thereafter, Robert W. Holley determined the structure of transfer RNA (tRNA), the adapter molecule that facilitates the process of translating RNA into protein. This work was based upon Ochoa's earlier studies, yielding the latter the Nobel Prize in Physiology or Medicine in 1959 for work on the enzymology of RNA synthesis. Extending this work, Nirenberg and Philip Leder revealed the code's triplet nature and deciphered its codons. In these experiments, various combinations of mRNA were passed through a filter that contained ribosomes, the components of cells that translate RNA into protein. Unique triplets promoted the binding of specific tRNAs to the ribosome. Leder and Nirenberg were able to determine the sequences of 54 out of 64 codons in their experiments. Khorana, Holley and Nirenberg received the 1968 Nobel for their work. The three stop codons were named by discoverers Richard Epstein and Charles Steinberg. "Amber" was named after their friend Harris Bernstein, whose last name means "amber" in German. The other two stop codons were named "ochre" and "opal" in order to keep the "color names" theme.

In a broad academic audience, the concept of the evolution of the genetic code from the original and ambiguous genetic code to a well-defined ("frozen") code with the repertoire of 20 (+2) canonical amino acids is widely accepted. However, there are different opinions, concepts, approaches and ideas, which is the best way to change it experimentally. Even models are proposed that predict "entry points" for synthetic amino acid invasion of the genetic code. Since 2001, 40 non-natural amino acids have been added into protein by creating a unique codon (recoding) and a corresponding transfer-RNA:aminoacyl – tRNA-synthetase pair to encode it with diverse physicochemical and biological properties in order to be used as a tool to exploring protein structure and function or to create novel or enhanced proteins. H. Murakami and M. Sisido extended some codons to have four and five bases. Steven A. Benner constructed a functional 65th (''in vivo'') codon. In 2015 N. Budisa, D. Söll and co-workers reported the full substitution of all 20,899 tryptophan residues (UGG codons) with unnatural thienopyrrole-alanine in the genetic code of the bacterium ''Escherichia coli''. In 2016 the first stable semisynthetic organism was created. It was a (single cell) bacterium with two synthetic bases (called X and Y). The bases survived cell division. In 2017, researchers in South Korea reported that they had engineered a mouse with an extended genetic code that can produce proteins with unnatural amino acids. In May 2019, researchers, in a milestone effort, reported the creation of a new synthetic (possibly artificial) form of viable life, a variant of the bacteria ''Escherichia coli'', by reducing the natural number of 64 codons in the bacterial genome to 59 codons instead, in order to encode 20 amino acids.

A reading frame is defined by the initial triplet of nucleotides from which translation starts. It sets the frame for a run of successive, non-overlapping codons, which is known as an "open reading frame" (ORF). For example, the string 5'-AAATGAACG-3' (see figure), if read from the first position, contains the codons AAA, TGA, and ACG ; if read from the second position, it contains the codons AAT and GAA ; and if read from the third position, it contains the codons ATG and AAC. Every sequence can, thus, be read in its 5' → 3' direction in three reading frames, each producing a possibly distinct amino acid sequence: in the given example, Lys (K)-Trp (W)-Thr (T), Asn (N)-Glu (E), or Met (M)-Asn (N), respectively (when translating with the vertebrate mitochondrial code). When DNA is double-stranded, six possible reading frames are defined, three in the forward orientation on one strand and three reverse on the opposite strand. Protein-coding frames are defined by a start codon, usually the first AUG (ATG) codon in the RNA (DNA) sequence. In eukaryotes, ORFs in exons are often interrupted by introns.

Translation starts with a chain-initiation codon or start codon. The start codon alone is not sufficient to begin the process. Nearby sequences such as the Shine-Dalgarno sequence in ''E. coli'' and initiation factors are also required to start translation. In eukaryotes initiation codon is located between kozak sequence. The most common start codon is AUG, which is read as methionine or, in bacteria, as formylmethionine. Alternative start codons depending on the organism include "GUG" or "UUG"; these codons normally represent valine and leucine, respectively, but as start codons they are translated as methionine or formylmethionine. The three stop codons have names: UAG is ''amber'', UGA is ''opal'' (sometimes also called ''umber''), and UAA is ''ochre''. Stop codons are also called "termination" or "nonsense" codons. They signal release of the nascent polypeptide from the ribosome because no cognate tRNA has anticodons complementary to these stop signals, allowing a release factor to bind to the ribosome instead.

During the process of DNA replication, errors occasionally occur in the polymerization of the second strand. These errors, mutations, can affect an organism's phenotype, especially if they occur within the protein coding sequence of a gene. Error rates are typically 1 error in every 10–100 million bases—due to the "proofreading" ability of DNA polymerases. Missense mutations and nonsense mutations are examples of point mutations that can cause genetic diseases such as sickle-cell disease and thalassemia respectively. Clinically important missense mutations generally change the properties of the coded amino acid residue among basic, acidic, polar or non-polar states, whereas nonsense mutations result in a stop codon. Mutations that disrupt the reading frame sequence by indels (insertions or deletions) of a non-multiple of 3 nucleotide bases are known as frameshift mutations. These mutations usually result in a completely different translation from the original, and likely cause a stop codon to be read, which truncates the protein. These mutations may impair the protein's function and are thus rare in ''in vivo'' protein-coding sequences. One reason inheritance of frameshift mutations is rare is that, if the protein being translated is essential for growth under the selective pressures the organism faces, absence of a functional protein may cause death before the organism becomes viable. Frameshift mutations may result in severe genetic diseases such as Tay–Sachs disease. Although most mutations that change protein sequences are harmful or neutral, some mutations have benefits. These mutations may enable the mutant organism to withstand particular environmental stresses better than wild type organisms, or reproduce more quickly. In these cases a mutation will tend to become more common in a population through natural selection. Viruses that use RNA as their genetic material have rapid mutation rates, which can be an advantage, since these viruses thereby evolve rapidly, and thus evade the immune system defensive responses. In large populations of asexually reproducing organisms, for example, ''E. coli'', multiple beneficial mutations may co-occur. This phenomenon is called clonal interference and causes competition among the mutations.

[[File:3D Genetic Code.jpg|Axes 1, 2, 3 are the first, second, and third positions in the codon. The 20 amino acids and stop codons (X) are shown in [[Amino acid#Table of standard amino acid abbreviations and properties|single letter code. Degeneracy is the redundancy of the genetic code. This term was given by Bernfield and Nirenberg. The genetic code has redundancy but no ambiguity (see the [[#RNA codon table|codon tables below for the full correlation). For example, although codons GAA and GAG both specify glutamic acid (redundancy), neither specifies another amino acid (no ambiguity). The codons encoding one amino acid may differ in any of their three positions. For example, the amino acid leucine is specified by YUR or CUN (UUA, UUG, CUU, CUC, CUA, or CUG) codons (difference in the first or third position indicated using IUPAC notation), while the amino acid serine is specified by UCN or AGY (UCA, UCG, UCC, UCU, AGU, or AGC) codons (difference in the first, second, or third position). A practical consequence of redundancy is that errors in the third position of the triplet codon cause only a silent mutation or an error that would not affect the protein because the hydrophilicity or hydrophobicity is maintained by equivalent substitution of amino acids; for example, a codon of NUN (where N = any nucleotide) tends to code for hydrophobic amino acids. NCN yields amino acid residues that are small in size and moderate in hydropathicity; NAN encodes average size hydrophilic residues. The genetic code is so well-structured for hydropathicity that a mathematical analysis (Singular Value Decomposition) of 12 variables (4 nucleotides x 3 positions) yields a remarkable correlation (C = 0.95) for predicting the hydropathicity of the encoded amino acid directly from the triplet nucleotide sequence, ''without translation.'' Note in the table, below, eight amino acids are not affected at all by mutations at the third position of the codon, whereas in the figure above, a mutation at the second position is likely to cause a radical change in the physicochemical properties of the encoded amino acid. Nevertheless, changes in the first position of the codons are more important than changes in the second position on a global scale. The reason may be that charge reversal (from a positive to a negative charge or vice versa) can only occur upon mutations in the first position of certain codons, but not upon changes in the second position of any codon. Such charge reversal may have dramatic consequences for the structure or function of a protein. This aspect may have been largely underestimated by previous studies.