The gastrointestinal tract, (GI tract, GIT, digestive tract, digestion tract, alimentary canal) is the tract from the mouth to the anus which includes all the organs of the digestive system in humans and other animals. Food taken in through the mouth is digested to extract nutrients and absorb energy, and the waste expelled as feces. The mouth, esophagus, stomach and intestines are all part of the gastrointestinal tract. ''Gastrointestinal'' is an adjective meaning of or pertaining to the stomach and intestines. A tract is a collection of related anatomic structures or a series of connected body organs. All vertebrates and most invertebrates have a digestive tract. The sponges, cnidarians, and ctenophores are the early invertebrates with an incomplete digestive tract having just one opening instead of two, where food is taken in and waste expelled. The human gastrointestinal tract consists of the esophagus, stomach, and intestines, and is divided into the upper and lower gastrointestinal tracts. The GI tract includes all structures between the mouth and the anus, forming a continuous passageway that includes the main organs of digestion, namely, the stomach, small intestine, and large intestine. However, the complete human digestive system is made up of the gastrointestinal tract plus the accessory organs of digestion (the tongue, salivary glands, pancreas, liver and gallbladder). The tract may also be divided into foregut, midgut, and hindgut, reflecting the embryological origin of each segment. The whole human GI tract is about nine metres (30 feet) long at autopsy. It is considerably shorter in the living body because the intestines, which are tubes of smooth muscle tissue, maintain constant muscle tone in a halfway-tense state but can relax in spots to allow for local distention and peristalsis. The gastrointestinal tract contains trillions of microbes, with some 4,000 different strains of bacteria having diverse roles in maintenance of immune health and metabolism. Cells of the GI tract release hormones to help regulate the digestive process. These digestive hormones, including gastrin, secretin, cholecystokinin, and ghrelin, are mediated through either intracrine or autocrine mechanisms, indicating that the cells releasing these hormones are conserved structures throughout evolution. 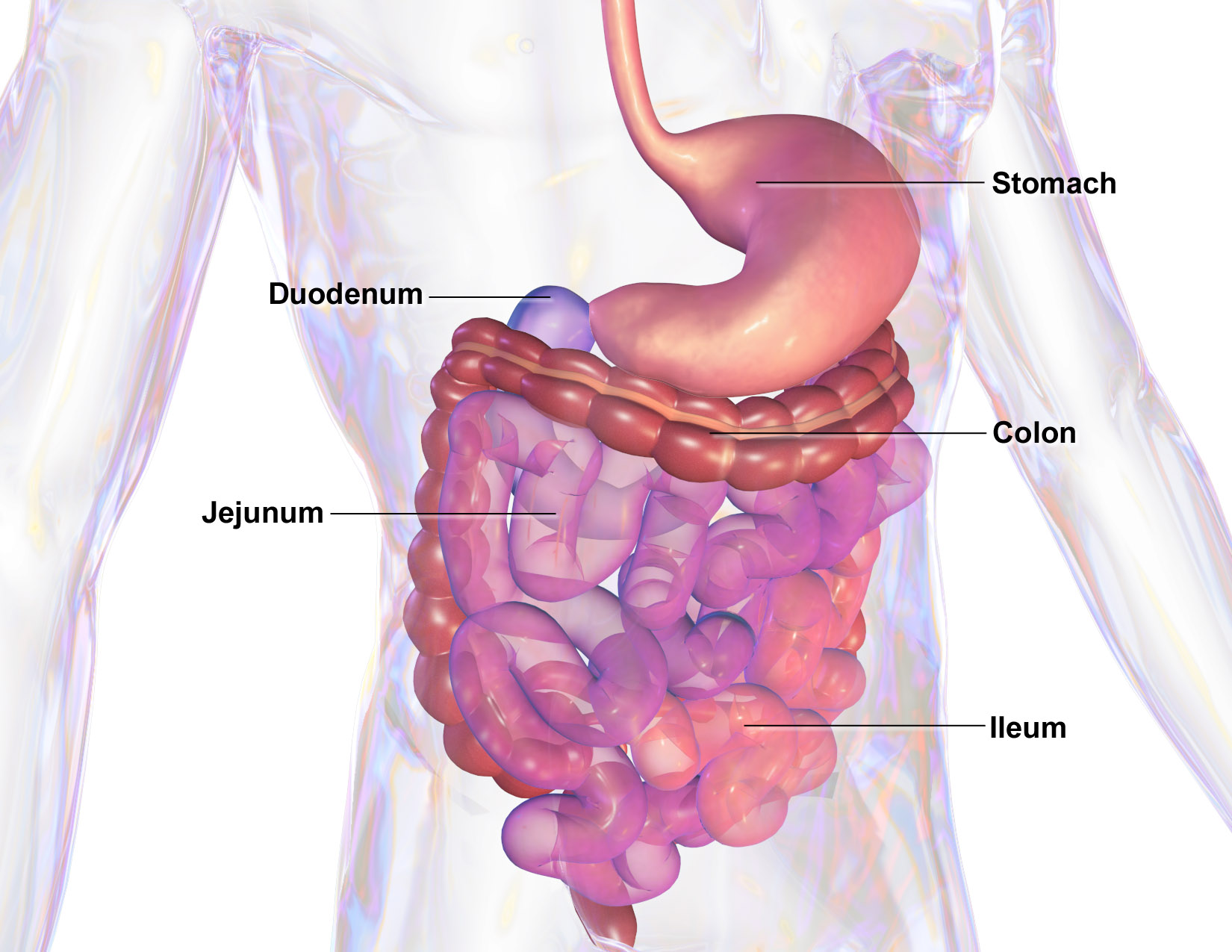 The structure and function can be described both as gross anatomy and as microscopic anatomy or histology. The tract itself is divided into upper and lower tracts, and the intestines small and large parts.

The upper gastrointestinal tract consists of the mouth, pharynx, esophagus, stomach, and duodenum. The exact demarcation between the upper and lower tracts is the suspensory muscle of the duodenum. This differentiates the embryonic borders between the foregut and midgut, and is also the division commonly used by clinicians to describe gastrointestinal bleeding as being of either "upper" or "lower" origin. Upon dissection, the duodenum may appear to be a unified organ, but it is divided into four segments based upon function, location, and internal anatomy. The four segments of the duodenum are as follows (starting at the stomach, and moving toward the jejunum): bulb, descending, horizontal, and ascending. The suspensory muscle attaches the superior border of the ascending duodenum to the diaphragm. The suspensory muscle is an important anatomical landmark which shows the formal division between the duodenum and the jejunum, the first and second parts of the small intestine, respectively. This is a thin muscle which is derived from the embryonic mesoderm.

= The small intestine begins at the duodenum and is a tubular structure, usually between 6 and 7 m long. Its mucosal area in an adult human is about . The combination of the circular folds, the villi, and the microvilli increases the absorptive area of the mucosa about 600-fold, making a total area of about for the entire small intestine. Its main function is to absorb the products of digestion (including carbohydrates, proteins, lipids, and vitamins) into the bloodstream. There are three major divisions: # Duodenum: A short structure (about 20–25 cm long