The flowering plants, also known as Angiospermae (), or Magnoliophyta (), are the most diverse group of land plants, with 64 orders, 416 families, approximately 13,000 known genera and 300,000 known species. Like gymnosperms, angiosperms are seed-producing plants. They are distinguished from gymnosperms by characteristics including flowers, endosperm within their seeds, and the production of fruits that contain the seeds. Etymologically, ''angiosperm'' means a plant that produces seeds within an enclosure; in other words, a fruiting plant. The term comes from the Greek words ("case" or "casing") and (seed) The ancestors of flowering plants diverged from the common ancestor of all living gymnosperms during the Carboniferous, over 300 million years ago, with the earliest record of angiosperm pollen appearing around 134 million years ago. The first remains of flowering plants are known from 125 million years ago. They diversified extensively during the Early Cretaceous, became widespread by 120 million years ago, and replaced conifers as the dominant trees from 60 to 100 million years ago.

Angiosperms differ from other seed plants in several ways, described in the table below. These distinguishing characteristics taken together have made the angiosperms the most diverse and numerous land plants and the most commercially important group to humans.

Angiosperm stems are made up of seven layers as shown on the right. The amount and complexity of tissue-formation in flowering plants exceeds that of gymnosperms. The vascular bundles of the stem are arranged such that the xylem and phloem form concentric rings. In the dicotyledons, the bundles in the very young stem are arranged in an open ring, separating a central pith from an outer cortex. In each bundle, separating the xylem and phloem, is a layer of meristem or active formative tissue known as cambium. By the formation of a layer of cambium between the bundles (interfascicular cambium), a complete ring is formed, and a regular periodical increase in thickness results from the development of xylem on the inside and phloem on the outside. The soft phloem becomes crushed, but the hard wood persists and forms the bulk of the stem and branches of the woody perennial. Owing to differences in the character of the elements produced at the beginning and end of the season, the wood is marked out in transverse section into concentric rings, one for each season of growth, called annual rings. Among the monocotyledons, the bundles are more numerous in the young stem and are scattered through the ground tissue. They contain no cambium and once formed the stem increases in diameter only in exceptional cases.

The characteristic feature of angiosperms is the flower. Flowers show remarkable variation in form and elaboration, and provide the most trustworthy external characteristics for establishing relationships among angiosperm species. The function of the flower is to ensure fertilization of the ovule and development of fruit containing seeds. The floral apparatus may arise terminally on a shoot or from the axil of a leaf (where the petiole attaches to the stem). Occasionally, as in violets, a flower arises singly in the axil of an ordinary foliage-leaf. More typically, the flower-bearing portion of the plant is sharply distinguished from the foliage-bearing or vegetative portion, and forms a more or less elaborate branch-system called an inflorescence. There are two kinds of reproductive cells produced by flowers. Microspores, which will divide to become pollen grains, are the "male" cells and are borne in the stamens (or microsporophylls). The "female" cells called megaspores, which will divide to become the egg cell (megagametogenesis), are contained in the ovule and enclosed in the carpel (or megasporophyll). The flower may consist only of these parts, as in willow, where each flower comprises only a few stamens or two carpels. Usually, other structures are present and serve to protect the sporophylls and to form an envelope attractive to pollinators. The individual members of these surrounding structures are known as sepals and petals (or tepals in flowers such as ''Magnolia'' where sepals and petals are not distinguishable from each other). The outer series (calyx of sepals) is usually green and leaf-like, and functions to protect the rest of the flower, especially the bud. The inner series (corolla of petals) is, in general, white or brightly colored, and is more delicate in structure. It functions to attract insect or bird pollinators. Attraction is effected by color, scent, and nectar, which may be secreted in some part of the flower. The characteristics that attract pollinators account for the popularity of flowers and flowering plants among humans. While the majority of flowers are perfect or hermaphrodite (having both pollen and ovule producing parts in the same flower structure), flowering plants have developed numerous morphological and physiological mechanisms to reduce or prevent self-fertilization. Heteromorphic flowers have short carpels and long stamens, or vice versa, so animal pollinators cannot easily transfer pollen to the pistil (receptive part of the carpel). Homomorphic flowers may employ a biochemical (physiological) mechanism called self-incompatibility to discriminate between self and non-self pollen grains. In other species, the male and female parts are morphologically separated, developing on different flowers. 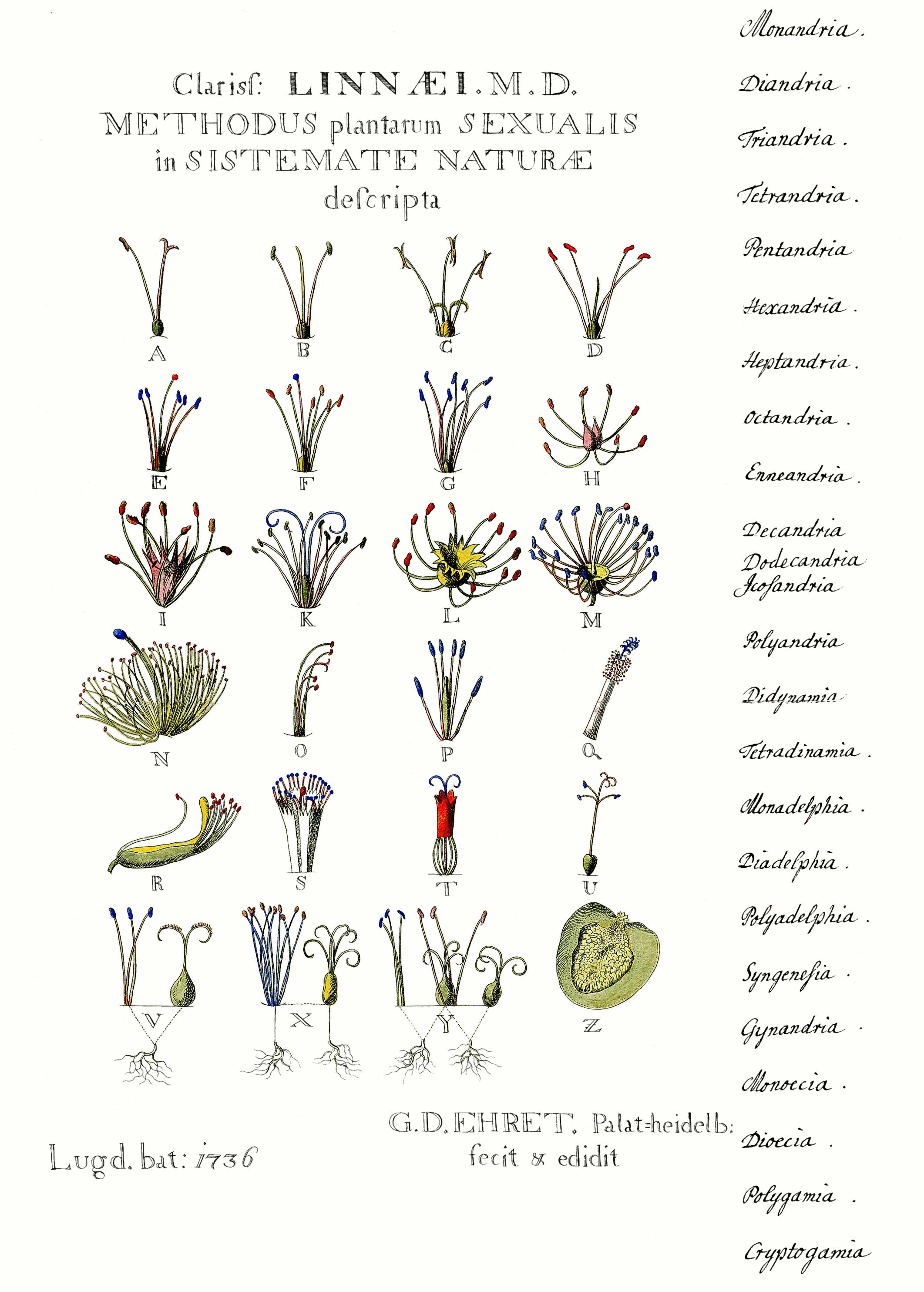 The botanical term "Angiosperm", from the Ancient Greek , (bottle, vessel) and , (seed), was coined in the form Angiospermae by Paul Hermann in 1690, as the name of one of his primary divisions of the plant kingdom. This included flowering plants possessing seeds enclosed in capsules, distinguished from his Gymnospermae, or flowering plants with achenial or schizo-carpic fruits, the whole fruit or each of its pieces being here regarded as a seed and naked. Both the term and its antonym were maintained by Carl Linnaeus with the same sense, but with restricted application, in the names of the orders of his class Didynamia. Its use with any approach to its modern scope became possible only after 1827, when Robert Brown established the existence of truly naked ovules in the Cycadeae and Coniferae, and applied to them the name Gymnosperms. From that time onward, as long as these Gymnosperms were, as was usual, reckoned as dicotyledonous flowering plants, the term Angiosperm was used antithetically by botanical writers, with varying scope, as a group-name for other dicotyledonous plants.

In 1851, Hofmeister discovered the changes occurring in the embryo-sac of flowering plants, and determined the correct relationships of these to the Cryptogamia. This fixed the position of Gymnosperms as a class distinct from Dicotyledons, and the term Angiosperm then gradually came to be accepted as the suitable designation for the whole of the flowering plants other than Gymnosperms, including the classes of Dicotyledons and Monocotyledons. This is the sense in which the term is used today. In most taxonomies, the flowering plants are treated as a coherent group. The most popular descriptive name has been Angiospermae (Angiosperms), with Anthophyta ("flowering plants") a second choice. These names are not linked to any rank. The Wettstein system and the Engler system use the name Angiospermae, at the assigned rank of subdivision. The Reveal system treated flowering plants as subdivision Magnoliophytina, but later split it to Magnoliopsida, Liliopsida, and Rosopsida. The Takhtajan system and Cronquist system treat this group at the rank of division, leading to the name Magnoliophyta (from the family name Magnoliaceae). The Dahlgren system and Thorne system (1992) treat this group at the rank of class, leading to the name Magnoliopsida. The APG system of 1998, and the later 2003 and 2009 revisions, treat the flowering plants as a clade called angiosperms without a formal botanical name. A formal classification was published alongside the 2009 revision in which the flowering plants form the Subclass Magnoliidae. The internal classification of this group has undergone considerable revision. The Cronquist system, proposed by Arthur Cronquist in 1968 and published in its full form in 1981, is still widely used but is no longer believed to accurately reflect phylogeny. A consensus about how the flowering plants should be arranged has recently begun to emerge through the work of the Angiosperm Phylogeny Group (APG), which published an influential reclassification of the angiosperms in 1998. Updates incorporating more recent research were published as the APG II system in 2003, the APG III system in 2009, and the APG IV system in 2016. Traditionally, the flowering plants are divided into two groups, * Dicotyledoneae or Magnoliopsida * Monocotyledoneae or Liliopsida which in the Cronquist system are called Magnoliopsida (at the rank of class, formed from the family name Magnoliaceae) and Liliopsida (at the rank of class, formed from the family name Liliaceae). Other descriptive names allowed by Article 16 of the ICBN include Dicotyledones or Dicotyledoneae, and Monocotyledones or Monocotyledoneae, which have a long history of use. In English, a member of either group may be called a dicotyledon (plural dicotyledons) and monocotyledon (plural monocotyledons), or abbreviated, as dicot (plural dicots) and monocot (plural monocots). These names derive from the observation that the dicots most often have two cotyledons, or embryonic leaves, within each seed. The monocots usually have only one, but the rule is not absolute either way. From a broad diagnostic point of view, the number of cotyledons is neither a particularly handy, nor a reliable character. Recent studies, as by the APG, show that the monocots form a monophyletic group (clade) but that the dicots do not (they are paraphyletic). Nevertheless, the majority of dicot species do form a monophyletic group, called the eudicots or tricolpates. Of the remaining dicot species, most belong to a third major clade known as the magnoliids, containing about 9,000 species. The rest include a paraphyletic grouping of early branching taxa known collectively as the basal angiosperms, plus the families Ceratophyllaceae and Chloranthaceae. 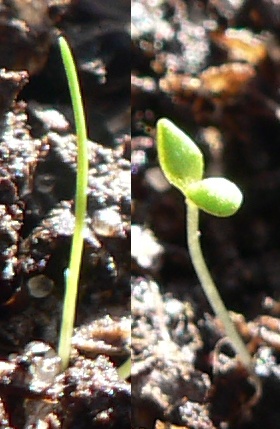