''Enterovirus'' is a genus of positive-sense single-stranded RNA viruses associated with several human and mammalian diseases. Enteroviruses are named by their transmission-route through the intestine (enteric meaning intestinal). Serologic studies have distinguished 71 human enterovirus serotypes on the basis of antibody neutralization tests. Additional antigenic variants have been defined within several of the serotypes on the basis of reduced or nonreciprocal cross-neutralization between variant strains. On the basis of their pathogenesis in humans and animals, the enteroviruses were originally classified into four groups, polioviruses, Coxsackie A viruses (CA), Coxsackie B viruses (CB), and echoviruses, but it was quickly realized that there were significant overlaps in the biological properties of viruses in the different groups. Enteroviruses isolated more recently are named with a system of consecutive numbers: EV-D68, EV-B69, EV-D70, EV-A71, etc, where genotyping is based on the VP1 capsid region. Enteroviruses affect millions of people worldwide each year and are often found in the respiratory secretions (e.g., saliva, sputum, or nasal mucus) and stool of an infected person. Historically, poliomyelitis was the most significant disease caused by an enterovirus, namely poliovirus. There are 81 non-polio and 3 polio enteroviruses that can cause disease in humans. Of the 81 non-polio types, there are 22 Coxsackie A viruses, 6 Coxsackie B viruses, 28 echoviruses, and 25 other enteroviruses. Poliovirus, as well as coxsackie and echovirus, is spread through the fecal-oral route. Infection can result in a wide variety of symptoms, including those of: mild respiratory illness (the common cold), hand, foot and mouth disease, acute hemorrhagic conjunctivitis, aseptic meningitis, myocarditis, severe neonatal sepsis-like disease, acute flaccid paralysis, and the related acute flaccid myelitis.

Enteroviruses are members of the picornavirus family, a large and diverse group of small RNA viruses characterized by a single positive-strand genomic RNA. All enteroviruses contain a genome of approximately 7,500 bases and are known to have a high mutation rate due to low-fidelity replication and frequent recombination. After infection of the host cell, the genome is translated in a cap-independent manner into a single polyprotein, which is subsequently processed by virus-encoded proteases into the structural capsid proteins and the nonstructural proteins, which are mainly involved in the replication of the virus. RNA recombination appears to be a major driving force in the evolution of enteroviruses as well as in the shaping of their genetic architecture. The mechanism of recombination of the RNA genome likely involves template strand switching during RNA replication, a process known as copy choice recombination. RNA recombination is considered to be an adaptation for dealing with RNA genome damage and a source of genetic diversity. It is also a source of concern for vaccination strategies, because live attenuated/mutated strains used for vaccination could potentially recombine with wild-type related strains, as has been the case with circulating Vaccine Derived PolioViruses (cVDPDs) .The capsid region and especially VP1 is a recombination coldspot, and this is one of the main reasons to use this region for genotyping .However, the 5'UTR - capsid junction and the beginning of the P2 region have been observed to recombine very frequently, although recombinations do occur in the rest of the genome as well. Interestingly, the enterovirus species EV-A, EV-B, EV-C, EV-D have not been observed so far to exchange genomic regions among them, with the exception of the 5'UTR. Rather, genomic regions of the ORF are exchanged among different genotypes of the same species, with certain genotypes like EV71 and CVA6 from EV-A, E30 and E6 from EV-B, PV1 and PV2 from EV-C playing a key role as recombination hubs. In addition, a recombination analysis of ~3000 Enterovirus genomes identified many recombination events where one of the recombination partners has not been sequenced yet, thus revealing that there exists a large, yet undetected enterovirus genetic reservoir that may lead to new recombination events and the emergence of new strains, genotypes and pathogens. 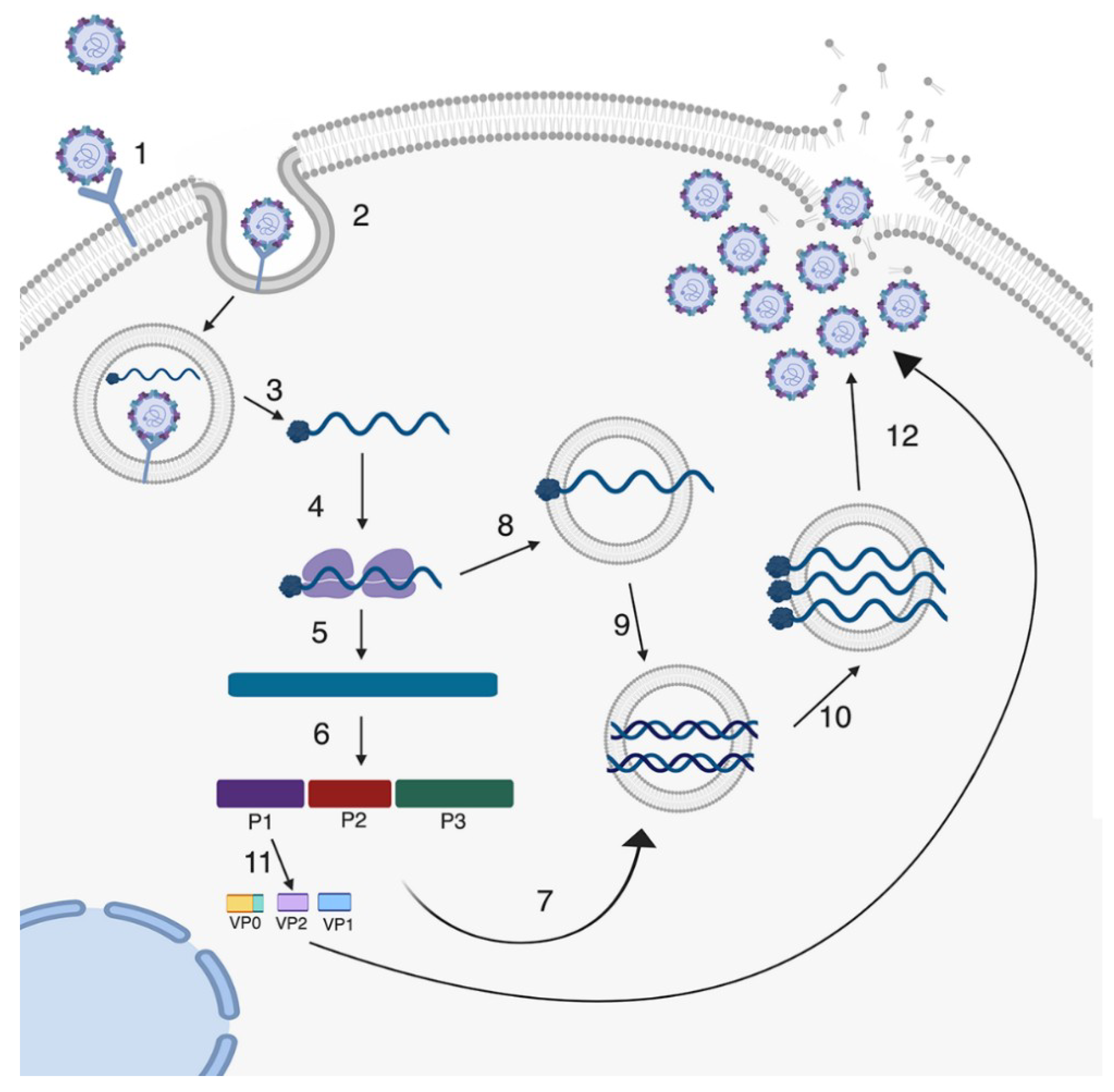 Coxsackie A16 virus causes human hand, foot and mouth disease. Enterovirus B includes coxsackievirus B1,2,3,4,5,6; coxsackievirus A9; echovirus 1-33 and enterovirus B69-113. Coxsackie B viruses are found world wide and can cause myocarditis (inflammation of the heart); pericarditis (inflammation of the sac surrounding the heart); meningitis (inflammation of the membranes that line the brain and spinal cord); and pancreatitis (inflammation of the pancreas). The Coxsackie B viruses are also reported to cause a spastic paralysis due to the degeneration of neuronal tissue and muscle injury. Infections usually occur during warm summer months with symptoms including exanthema, pleurodynia, flu-like illness consisting of fever, fatigue, malaise, myalgia, nausea, abdominal pain and vomiting. Echoviruses are a cause of many of the nonspecific viral infections that can range from minor illness to severe, potentially fatal conditions such as aseptic meningitis, encephalitis, paralysis and myocarditis. It is mainly found in the intestine, and can cause nervous disorders. Type B enteroviruses are responsible for a vast number of mild and acute infections. They have been reported to remain in the body causing persistent infections contributing to chronic diseases such as type I diabetes. Enterovirus C consists of polioviruses 1,2 and 3; coxsackieviruses A1, A11, A13, A18, A17, 20, A21, A22, A24 and enterovirus C95, C96, C99, C102, C104, C105, C109, C113, C118. The three serotypes of poliovirus, PV-1, PV-2, and PV-3 each have a slightly different capsid protein. Capsid proteins define cellular receptor specificity and virus antigenicity. PV-1 is the most common type to cause infection in humans; however, all three forms are extremely contagious spreading through person-to-person contact. Poliovirus causes Polio, or Poliomyelitis, which is a disabling and life threatening disease that causes paresthesia, meningitis and permanent paralysis. Symptoms can include sore throat, fever, tiredness, nausea, headache and stomach pain although 72% of those that get infected will not display visible symptoms. There are two types of vaccines available to prevent polio: inactivated poliovirus vaccine given as an injection in the leg (IPV) or arm and oral poliovirus vaccine (OPV). The polio vaccine is highly efficacious giving protection to 99 out of 100 children vaccinated.

Enteroviruses are usually only capable of producing acute infections that are rapidly cleared by the adaptive immune response. However genome mutations, which enterovirus B serotypes may acquire in the host during the acute phase, may transform these viruses into the non-cytolytic form (also known as non-cytopathic or defective enterovirus). This is a mutated quasispecies of enterovirus, which can cause persistent infection in human cardiac tissues especially in some patients with myocarditis or dilated cardiomyopathy. In persistent infections viral RNA is present only on very low levels and is not believed to contribute to any ongoing myocardial disease being a fading remnant of a recent acute infection although some scientists think otherwise.

EV-D68 first was identified in California in 1962. Compared with other enteroviruses, it has been rarely reported in the U.S. in the past 40 years. Most people who get infected are infants, children, and teens. EV-D68 usually causes mild to severe respiratory illness; however, the full spectrum of EV-D68 illness is not well-defined. Most start with common cold symptoms of runny nose and cough. Some, but not all, may also have fever. For more severe cases, difficulty breathing, wheezing or problems catching your breath may occur. As of October 4, 2014, there has been one death in New Jersey directly linked to EV-D68, as well as one death in Rhode Island attributed to a combination of EV-D68 and sepsis caused by an infection of staphylococcus aureus.

Enterovirus A71 (EV-A71) is notable as one of the major causative agents for hand, foot and mouth disease (HFMD), and is sometimes associated with severe central nervous system diseases. EV-A71 was first isolated and characterized from cases of neurological disease in California in 1969. To date, little is known about the molecular mechanisms of host response to EV-A71 infection, but increases in the level of mRNAs encoding chemokines, proteins involved in protein degradation, complement proteins, and proapoptotis proteins have been implicated. 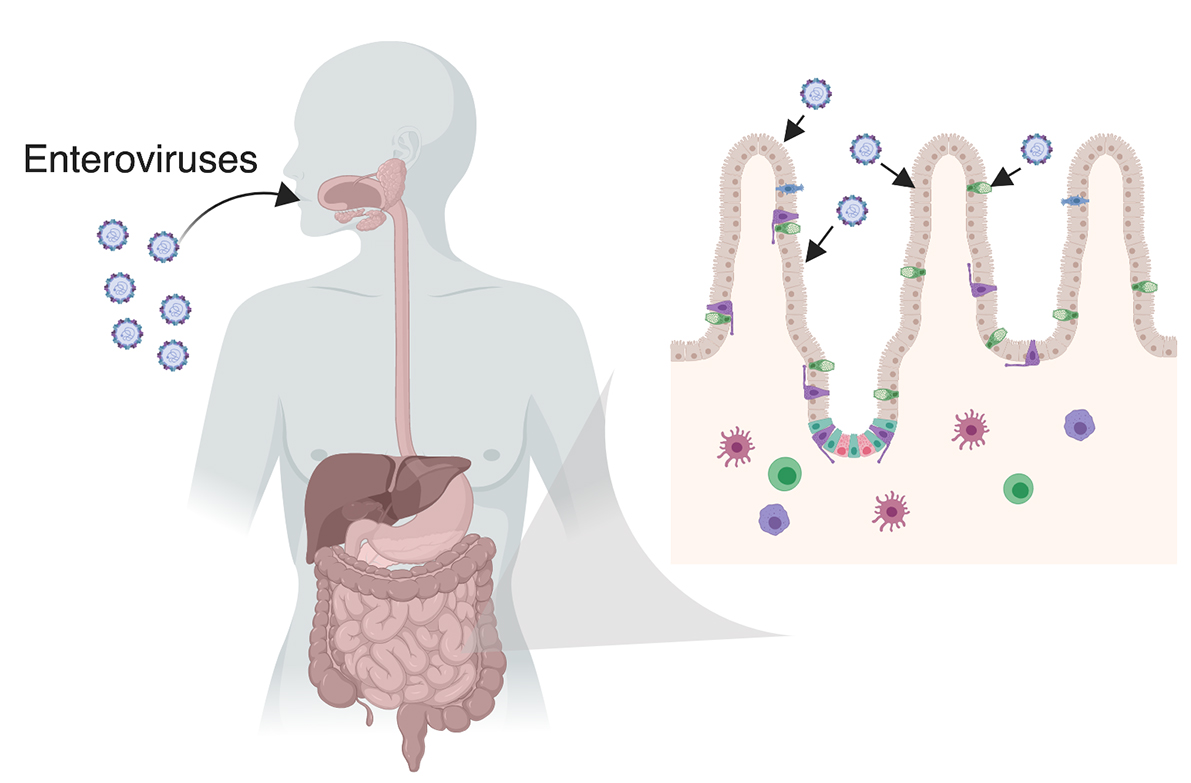 Enteroviruses cause a wide range of symptoms, and while their long list of signs and symptoms should put them on the differential diagnosis list of many illnesses, they often go unnoticed. Enteroviruses can cause anything from rashes in small children, to summer colds, to encephalitis, to blurred vision, to pericarditis. Enteroviral infections have a great range in presentation and seriousness. Non polio enteroviruses cause 10–15 million infections and tens of thousands of hospitalizations in the US each year. Enteroviruses can be identified through cell culture or PCR assay, collected from fecal or respiratory specimens. Below are common enterovirus related diseases, including poliomyelitis. *Poliomyelitis primarily via the fecal-oral route *Polio-like syndrome found in children who tested positive for enterovirus 68. *Nonspecific febrile illness is the most common presentation of enterovirus infection. Other than fever, symptoms include muscle pain, sore throat, gastrointestinal distress/abdominal discomfort, and headache. In newborns the picture may be that of sepsis, however, and can be severe and life-threatening. *Enteroviruses are by far the most common causes of aseptic meningitis in children. In the United States, enteroviruses are responsible for 30,000 to 50,000 meningitis hospitalizations per year as a result of 10–15 million infections. *Bornholm disease or epidemic pleurodynia is characterized by severe paroxysmal pain in the chest and abdomen, along with fever, and sometimes nausea, headache, and emesis. *Pericarditis and/or myocarditis are typically caused by enteroviruses; symptoms consist of fever with dyspnea and chest pain. Arrhythmias, heart failure, and myocardial infarction have also been reported. *Acute hemorrhagic conjunctivitis can be caused by enteroviruses. *Herpangina is caused by Coxsackie A virus, and causes a vesicular rash in the oral cavity and on the pharynx, along with high fever, sore throat, malaise, and often dysphagia, loss of appetite, back pain, and headache. It is also self-limiting, with symptoms typically ending in 3–4 days. *Hand, foot and mouth disease is a childhood illness most commonly caused by infection by Coxsackie A virus or EV71. *Encephalitis is rare manifestation of enterovirus infection; when it occurs, the most frequent enterovirus found to be causing it is echovirus 9. *Myocarditis is characterized by inflammation of the myocardium (cardiac muscle cells). Over the last couple of decades, numerous culprits have been identified as playing a role in myocarditis pathogenesis in addition to the enterovirus, which at first was the most commonly implicated virus in this pathology. One of the most common enteroviruses found to be responsible for causing Myocarditis is the Coxsackie B3 virus. *A 2007 study suggested that acute respiratory or gastrointestinal infections associated with enterovirus may be a factor in chronic fatigue syndrome.

Enterovirus has been speculated to be connected with Type 1 diabetes. It has been proposed that type 1 diabetes is a virus-triggered autoimmune response in which the immune system attacks virus-infected cells along with the insulin-producing beta cells in the pancreas. A team working at University of Tampere, Finland has identified a type of enterovirus that has a possible link to type 1 diabetes (which is an autoimmune disease).

Most people who contract Enterovirus have mild symptoms lasting about a week. Those with higher risk may have more complications sometimes becoming fatal. The most common sign of Enterovirus is a Common Cold. More intense symptoms of Enterovirus include Hypoxia, Aseptic meningitis, Conjunctivitis,Hand, foot and mouth disease and Paralysis.

Treatment for enteroviral infection is mainly supportive. In cases of pleurodynia, treatment consists of analgesics to relieve the severe pain that occurs in patients with the disease; in some severe cases, opiates may be needed. Treatment for aseptic meningitis caused by enteroviruses is also mainly symptomatic. In patients with enteroviral carditis, treatment consists of the prevention and treatment of complications such as arrhythmias, pericardial effusion, and cardiac failure. Other treatments that have been investigated for enteroviral carditis include intravenous immunoglobulin. 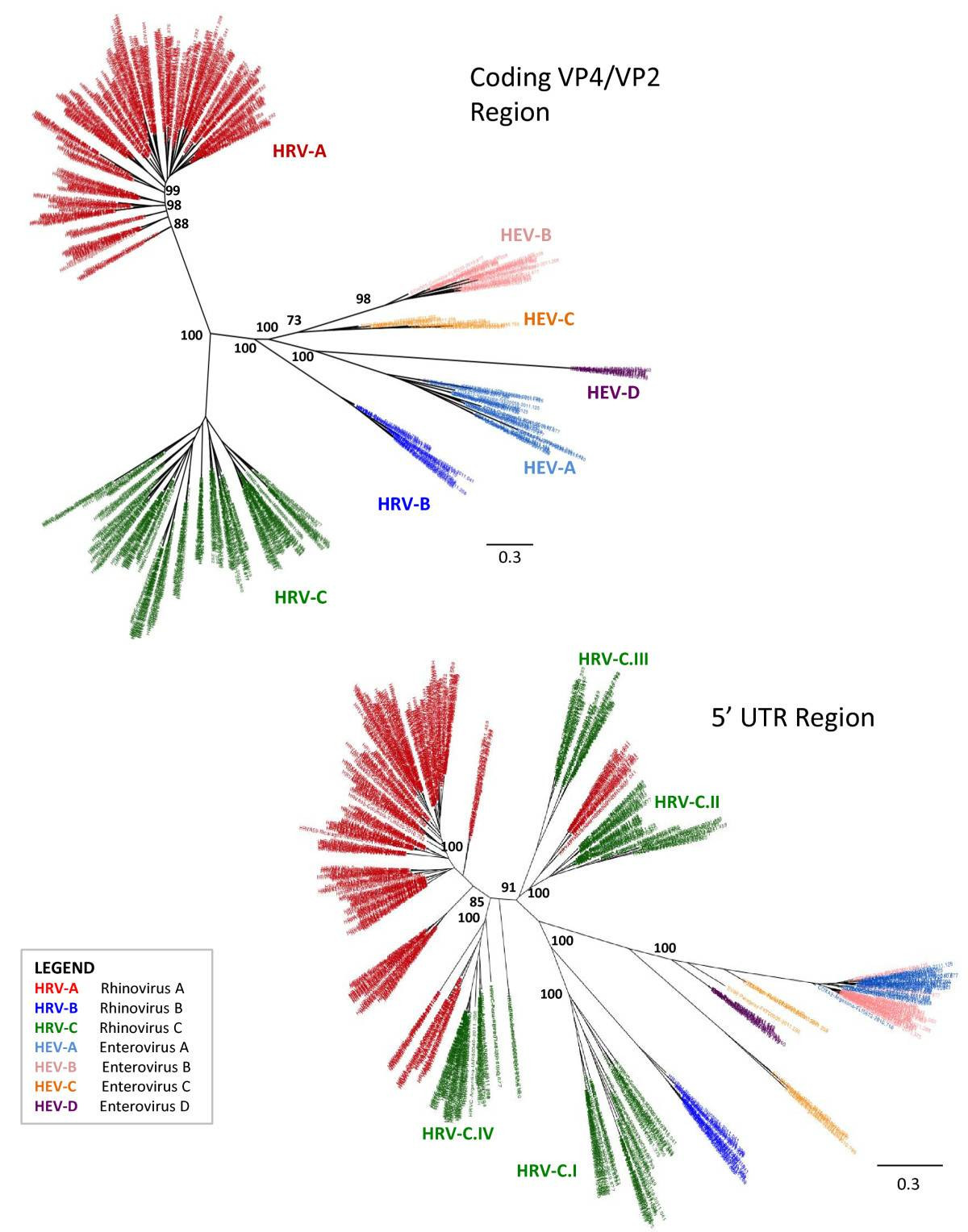