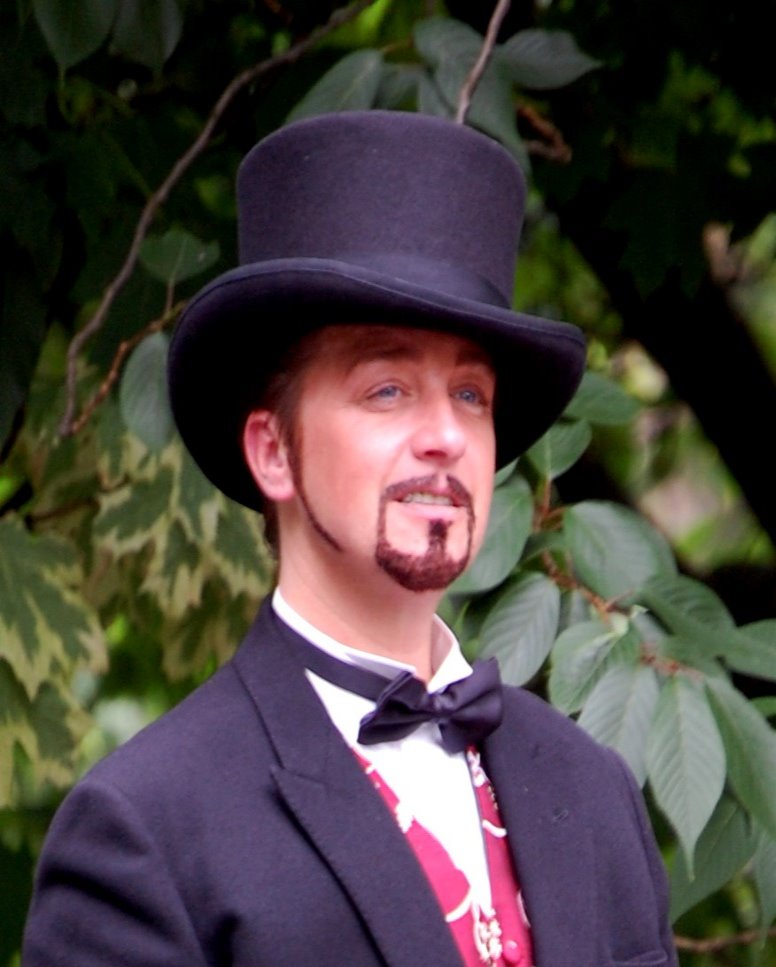 Drag kings are mostly female s who dress in and personify male s as part of an individual or group routine. A typical may incorporate dancing, acting, and singing, either live or to pre-recorded tracks. Drag kings often perform as exaggeratedly male characters, portray marginalised masculinities such as construction workers and rappers or they will impersonate male celebrities like , and . In the late 1800s and early 1900s, several drag kings became British stars and British has preserved the tradition of women performing in male roles. Starting in the mid-1990s, drag kings started to gain some of the fame and attention that s have known.

While the term ' was first cited in print in 1972, there is a longer history of female performers dressing in male attire. In theatre and opera there was a tradition of s and . Actress and playwright appeared in breeches roles around 1700. The first popular male impersonator in U.S. theatre was , who started performing in New York in 1867; in 1886 she married her dresser, Annie Ryan. British music hall performer was active in the late 19th and early 20th centuries as a male impersonator. Other male impersonators on the British stage were and . Blues singer performed in male attire in New York, Los Angeles and San Francisco from the 1920s through 1940s. performed in male drag along with female impersonators at the Jewel Box Revue in the 1950s and 1960s, as documented in the film ''Storme: The Lady of the Jewel Box''; DeLarverie was also a veteran of the . Drag king culture in Australia flourished in s from the 1990s and 2000s, but began to fade in the 2010s. The term ''drag king'' is sometimes used in a broader sense, to include female-bodied people who dress in traditionally clothing for other reasons. This usage includes women temporarily attempting to as men and women who wish to present themselves in a masculine without identifying as a man. began leading Drag King Workshops in 1989 that offer women a lesson in passing as men. Torr was featured in the 2002 film on drag kings ''Venus Boyz''. Drag kings have historically been more marginalised by than s, who began playing a larger role in mainstream pop culture from the late 20th Century onwards. Drag kings have also historically been marginalised in academic . Recently, drag kings have started to play a slightly more visible role in the . ''Sleek Magazine'' described this renaissance of drag king culture in a 2019 article titled "What's behind the drag king revolution?" The British drag king collective Pecs, made up of an entirely female and troupe, was founded in 2013 and went on to perform at and The Glory. In 2016 director Nicole Miyahara produced ''The Making of a King'', a documentary film chronicling the lives of contemporary drag kings in . The first drag king to appear in a television show was New Zealand artist and comedian who won the inaugural season of the New Zealand in 2018. In 2019 American artist was the first drag king and cisgender woman to appear on a televised US drag competition when he won the third season of .

A British lesbian organisation called made it part of their mission to promote drag kings on the wider British cabaret circuit. Their founder Pixie Truffle gave an interview to the ''Guardian'' newspaper in the United Kingdom on her desire for drag kings to close the gap with queens and with male stand-up comedians. Similar to some drag queens who prefer to be seen as actors—like and —some drag kings prefer not to be pigeon-holed by the ''drag king'' label. "I think when people assume that somebody is , or different, or , they always want to put something before their name," said in an interview. "And that is what drag king has been. Why can not you just call me a like is called a comedian?" In recent years, some drag king performers have adopted other terms to describe their own performance styles, particularly if they deviate from the more traditional forms of "kinging". Common names including "gender blurring" acknowledge the merging of both male and female traits in the performances. Vancouver performer Rose Butch adopted the ambiguous label "drag thing". Long-time performer Flare called the stage of drag king styles that emerged in Toronto's scene in the mid-2010s as "unicorn drag".

Names include Christian Adore, , and Buck Naked. In 2021, Chicago-based drag king Tenderoni won the Drag Queen of the Year pageant hosted by Lola LeCroix and .

Face: One method drag kings use to modify their facial features is burning a wine cork and smudging it along the jaw to create the illusion of a beard or stubble. Kings may aim to deepen the colour of their eyebrows or create a fuller look with dark eyeliner or other makeup. Similarly some methods call for layering liquid eyeliner over the cork ash, or dark makeup, base. When trying to achieve a realistic look, drag kings may add crepe hair over the makeup using glue, thus completing the illusion of a full beard. Look: Drag kings also make use of items such as socks and silicone prosthetics when packing, creating the illusion of a male appendage between the legs. Stage Presence and Performance: An important part of gender illusion, this refers to the way a drag performer utilises body language and takes up space on stage. Some kings will incorporate more aggressive choreography into their routines to emulate or expand on stereotypical masculine characteristics. Accessories, rhinestones and elaborate costumes contribute to a drag king's performance.

Body shaping apparel, most commonly binders, kinesiology tape, and sports bras, are used to create the look of a flat chest. For hiding one's breasts some use a method involving cutting a hole in the crotch of for the head and making sleeves out the legs.

;Drag king resources
'How to be a drag king' by London king Lenna Cumberbatch


: an article on the otokoyaku, or male role players, of the all-female Japanese * Radio Documentary, ''The Drag King Show'', produced by fo