Coenzyme A was identified by Fritz Lipmann in 1946, who also later gave it its name. Its structure was determined during the early 1950s at the Lister Institute, London, together by Lipmann and other workers at
Harvard Medical School Harvard Medical School (HMS) is the graduate medical school A medical school is a tertiary educational institution, or part of such an institution, that teaches medicine, and awards a professional degree for physicians. Such medical degrees ...
and
Massachusetts General Hospital Massachusetts General Hospital (Mass General or MGH) is the original and largest teaching hospital of Harvard Medical School located in the West End, Boston, West End neighborhood of Boston, Massachusetts. It is the third oldest general hospital i ...
. Lipmann initially intended to study acetyl transfer in animals, and from these experiments he noticed a unique factor that was not present in enzyme extracts but was evident in all organs of the animals. He was able to isolate and purify the factor from pig liver and discovered that its function was related to a coenzyme that was active in choline acetylation. Work with Beverly Guirard, Nathan Kaplan, and others determined that pantothenic acid was a central component of coenzyme A. The coenzyme was named coenzyme A to stand for "activation of acetate". In 1953, Fritz Lipmann won the Nobel Prize in Physiology or Medicine "for his discovery of co-enzyme A and its importance for intermediary metabolism".

Coenzyme A is naturally synthesized from pantothenate (vitamin B5), which is found in food such as meat, vegetables, cereal grains, legumes, eggs, and milk. In humans and most living organisms, pantothenate is an essential vitamin that has a variety of functions. In some plants and bacteria, including ''
Escherichia coli ''Escherichia coli'' (),Wells, J. C. (2000) Longman Pronunciation Dictionary. Harlow ngland Pearson Education Ltd. also known as ''E. coli'' (), is a Gram-negative bacteria, Gram-negative, Facultative anaerobic organism, facultative anaer ...
'', pantothenate can be synthesised ''de novo'' and is therefore not considered essential. These bacteria synthesize pantothenate from the amino acid aspartate and a metabolite in valine biosynthesis. In all living organisms, coenzyme A is synthesized in a five-step process that requires four molecules of ATP, pantothenate and cysteine (see figure):

Coenzyme A is produced commercially via extraction from yeast, however this is an inefficient process (yields approximately 25 mg/kg) resulting in an expensive product. Various ways of producing CoA synthetically, or semi-synthetically have been investigated although none are currently operating at an industrial scale. 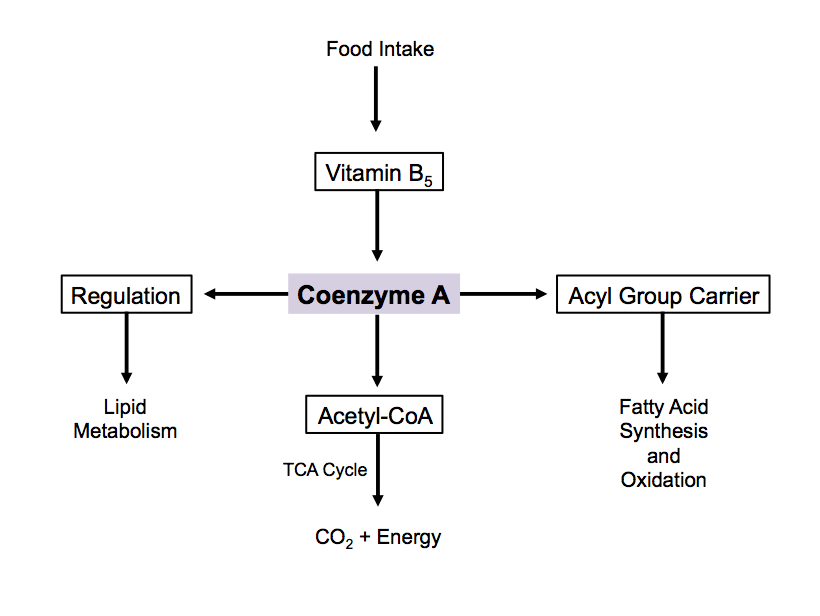 Coenzyme A is one of five crucial coenzymes that are necessary in the reaction mechanism of the
citric acid cycle The citric acid cycle (CAC)—also known as the Krebs cycle or the TCA cycle (tricarboxylic acid cycle)—is a series of chemical reactions to release stored energy through the Redox, oxidation of acetyl-CoA derived from carbohydrates, fats, and p ...
. Its acetyl-coenzyme A form is the primary input in the citric acid cycle and is obtained from
glycolysis Glycolysis is the metabolic pathway that converts glucose () into pyruvic acid, pyruvate (). The Thermodynamic free energy, free energy released in this process is used to form the high-energy molecules adenosine triphosphate (ATP) and NADH, red ...
, amino acid metabolism, and fatty acid beta oxidation. This process is the body's primary
catabolic pathway Catabolism () is the set of Metabolism, metabolic pathways that breaks down molecules into smaller units that are either oxidized to release energy or used in other anabolic reactions. Catabolism breaks down large molecules (such as polysacchari ...
and is essential in breaking down the building blocks of the cell such as
carbohydrate In organic chemistry, a carbohydrate () is a biomolecule consisting of carbon (C), hydrogen (H) and oxygen (O) atoms, usually with a hydrogen–oxygen atom ratio of 2:1 (as in water) and thus with the empirical formula (where ''m'' may or may ...
s,
amino acid Amino acids are organic compound In chemistry, organic compounds are generally any chemical compounds that contain carbon-hydrogen or carbon-carbon chemical bond, bonds. Due to carbon's ability to Catenation, catenate (form chains with ot ...
s, and
lipid Lipids are a broad group of naturally-occurring molecules which includes fats, waxes, sterols, fat-soluble vitamins (such as vitamins Vitamin A, A, Vitamin D, D, Vitamin E, E and Vitamin K, K), monoglycerides, diglycerides, phospholipids, and o ...
s.

When there is excess glucose, coenzyme A is used in the cytosol for synthesis of fatty acids. This process is implemented by regulation of acetyl-CoA carboxylase, which catalyzes the committed step in fatty acid synthesis.
Insulin Insulin (, from Latin ''insula'', 'island') is a peptide hormone produced by beta cells of the pancreatic islets encoded in humans by the ''INS'' gene. It is considered to be the main Anabolism, anabolic hormone of the body. It regulates the m ...
stimulates acetyl-CoA carboxylase, while
epinephrine Adrenaline, also known as epinephrine, is a hormone and medication A medication (also called medicament, medicine, pharmaceutical drug, medicinal drug or simply drug) is a drug used to medical diagnosis, diagnose, cure, treat, or preve ...
and
glucagon Glucagon is a peptide hormone, produced by alpha cells of the pancreas. It raises concentration of glucose and fatty acids in the bloodstream, and is considered to be the main catabolic hormone of the body. It is also used as a Glucagon (medicati ...
inhibit its activity. During cell starvation, coenzyme A is synthesized and transports fatty acids in the cytosol to the mitochondria. Here, acetyl-CoA is generated for oxidation and energy production. In the citric acid cycle, coenzyme A works as an allosteric regulator in the stimulation of the enzyme
pyruvate dehydrogenase Pyruvate dehydrogenase is an enzyme Enzymes () are proteins that act as biological catalysts by accelerating chemical reactions. The molecules upon which enzymes may act are called substrate (chemistry), substrates, and the enzyme convert ...
. New research has found that protein CoAlation plays an important role in regulation of the oxidative stress response. Protein CoAlation plays a similar role to ''S''-glutathionylation in the cell, and prevents the irreversible oxidation of the thiol group in cysteine on the surface of cellular proteins, while also directly regulating enzymatic activity in response to oxidative or metabolic stress.

Use in biological research

Coenzyme A is available from various chemical suppliers as the free acid and
lithium Lithium (from el, λίθος, lithos, lit=stone) is a chemical element with the Symbol (chemistry), symbol Li and atomic number 3. It is a soft, silvery-white alkali metal. Under standard temperature and pressure, standard conditions, it ...
or
sodium Sodium is a chemical element with the Symbol (chemistry), symbol Na (from Latin ''natrium'') and atomic number 11. It is a soft, silvery-white, highly reactive metal. Sodium is an alkali metal, being in group 1 element, group 1 of the ...
salts. The free acid of coenzyme A is detectably unstable, with around 5% degradation observed after 6 months when stored at −20 °C, and near complete degradation after 1 month at 37 °C. The lithium and sodium salts of CoA are more stable, with negligible degradation noted over several months at various temperatures. Aqueous solutions of coenzyme A are unstable above pH 8, with 31% of activity lost after 24 hours at 25 °C and pH 8. CoA stock solutions are relatively stable when frozen at pH 2–6. The major route of CoA activity loss is likely the air oxidation of CoA to CoA disulfides. CoA mixed disulfides, such as CoA-''S''–''S''-glutathione, are commonly noted contaminants in commercial preparations of CoA. Free CoA can be regenerated from CoA disulfide and mixed CoA disulfides with reducing agents such as dithiothreitol or 2-mercaptoethanol.

*
Acetyl-CoA Acetyl-CoA (acetyl coenzyme A) is a molecule that participates in many biochemical reactions in protein, carbohydrate and lipid metabolism Metabolism (, from el, μεταβολή ''metabolē'', "change") is the set of life-sustaining che ...
* fatty acyl-CoA (activated form of all fatty acids; only the CoA esters are substrates for important reactions such as mono-, di-, and triacylglycerol synthesis, carnitine palmitoyl transferase, and
cholesterol Cholesterol is any of a class of certain organic compound, organic molecules called lipids. It is a sterol (or chemical modification, modified steroid), a type of lipid. Cholesterol is biosynthesis, biosynthesized by all animal Cell (biology)# ...
esterification In chemistry Chemistry is the scientific study of the properties and behavior of matter. It is a natural science that covers the elements that make up matter to the compounds made of atoms, molecules and ions: their composition, stru ...
) ** Propionyl-CoA ** Butyryl-CoA ** Myristoyl-CoA ** Crotonyl-CoA *
Acetoacetyl-CoA Acetoacetyl CoA is the precursor of HMG-CoA in the mevalonate pathway, which is essential for Cholesterol#Biosynthesis, cholesterol biosynthesis. It also takes a similar role in the ketone bodies synthesis (ketogenesis) pathway of the liver. In the ...
* Coumaroyl-CoA (used in
flavonoid Flavonoids (or bioflavonoids; from the Latin word ''flavus'', meaning yellow, their color in nature) are a class of polyphenolic secondary metabolites found in plants, and thus commonly consumed in the diets of humans. Chemically, flavonoids ...
and
stilbenoid Stilbenoids are hydroxylated derivatives of stilbene Stilbene may refer to one of the two stereoisomers of 1,2-diphenylethene: * (E)-Stilbene, (''E'')-Stilbene (''trans'' isomer) * (Z)-Stilbene, (''Z'')-Stilbene (''cis'' isomer) See also * Stil ...
biosynthesis) * Benzoyl-CoA * Phenylacetyl-CoA * Acyl derived from
dicarboxylic acid In organic chemistry, a dicarboxylic acid is an organic compound containing two carboxyl groups (). The general molecular formula for dicarboxylic acids can be written as , where R can be aliphatic or Aromatic compound, aromatic. In general, dicar ...
s ** Malonyl-CoA (important in chain elongation in fatty acid biosynthesis and
polyketide Polyketides are a class of natural products derived from a precursor molecule consisting of a chain of alternating ketone (or Carbonyl reduction, reduced forms of a ketone) and methylene groups: (-CO-CH2-). First studied in the early 20th century, ...
biosynthesis) ** Succinyl-CoA (used in
heme Heme, or haem (pronounced / hi:m/ ), is a precursor to hemoglobin, which is necessary to bind oxygen Oxygen is the chemical element with the chemical symbol, symbol O and atomic number 8. It is a member of the chalcogen Group (period ...
biosynthesis) ** Hydroxymethylglutaryl-CoA (used in
isoprenoid The terpenoids, also known as isoprenoids, are a class of naturally occurring organic compound, organic chemicals derived from the 5-carbon compound isoprene and its derivatives called terpenes, diterpenes, etc. While sometimes used interchangeabl ...
biosynthesis) ** Pimelyl-CoA (used in
biotin Biotin (or vitamin B7) is one of the B vitamins. It is involved in a wide range of metabolic processes, both in humans and in other organisms, primarily related to the utilization of fats, carbohydrates, and amino acids. The name ''biotin'', bor ...
biosynthesis)