A clock face is the part of an analog clock (or watch) that displays time through the use of a flat dial with reference marks, and revolving pointers turning on concentric shafts at the center, called hands. In its most basic, globally recognized form, the periphery of the dial is numbered 1 through 12 indicating the hours in a 12-hour cycle, and a short hour hand makes two revolutions in a day. A long minute hand makes one revolution every hour. The face may also include a ''second hand'', which makes one revolution per minute. The term is less commonly used for the time display on digital clocks and watches. A second type of clock face is the 24-hour analog dial, widely used in military and other organizations that use 24-hour time. This is similar to the 12-hour dial above, except it has hours numbered 1–24 around the outside, and the hour hand makes only one revolution per day. Some special-purpose clocks, such as timers and sporting event clocks, are designed for measuring periods less than one hour. Clocks can indicate the hour with Roman numerals or Hindu–Arabic numerals, or with non-numeric indicator marks. The two numbering systems have also been used in combination, with the prior indicating the hour and the latter the minute. Longcase clocks (grandfather clocks) typically use Roman numerals for the hours. Clocks using only Arabic numerals first began to appear in the mid-18th century. The clock face is so familiar that the numbers are often omitted and replaced with unlabeled graduations (marks), particularly in the case of watches. Occasionally, markings of any sort are dispensed with, and the time is read by the angles of the hands.

The word ''clock'' derives from the medieval Latin word for "bell"; ''clogga'', and has cognates in many European languages. Clocks spread to England from the Low Countries, so the English word came from the Middle Low German and Middle Dutch ''Klocke''. The first mechanical clocks, built in 13th-century Europe, were striking clocks: their purpose was to ring bells upon the canonical hours, to call the local community to prayer. These were tower clocks installed in bell towers in public places, to ensure that the bells were audible over a wide area. Soon after these first mechanical clocks were in place people realized that their wheels could be used to drive an indicator on a dial on the outside of the tower, where it could be widely seen. Before the late 14th century, a fixed hand (often a carving literally shaped like a hand) indicated the hour by pointing to numbers on a rotating dial; after this time, the current convention of a rotating hand on a fixed dial was adopted. Minute hands (so named because they indicated the small, or ''minute'', divisions of the hour) only came into regular use around 1690, after the invention of the pendulum and anchor escapement increased the precision of time-telling enough to justify it. In some precision clocks, a third hand, which rotated once a minute, was added in a separate subdial. This was called the "second-minute" hand (because it measured the ''secondary minute'' divisions of the hour), which was shortened to "second" hand. The convention of the hands moving clockwise evolved in imitation of the sundial. In the Northern hemisphere, where the clock face originated, the shadow of the gnomon on a horizontal sundial moves clockwise during the day. 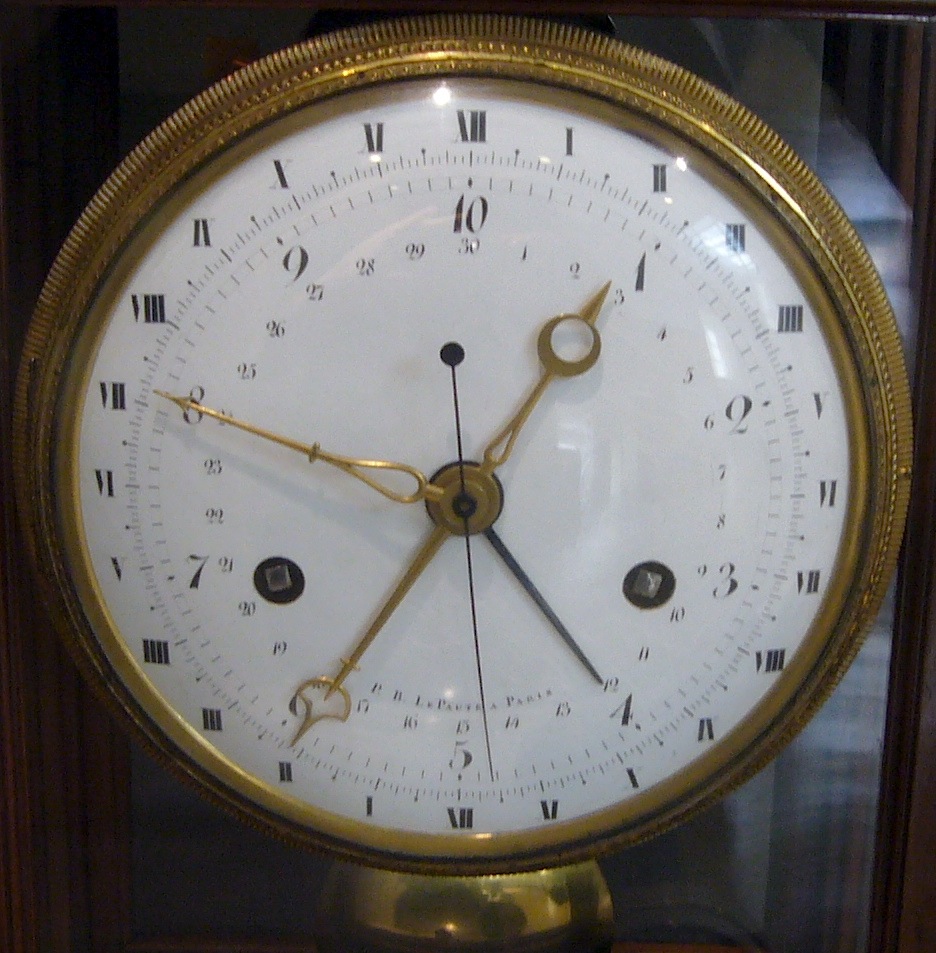 During the French Revolution in 1793, in connection with its Republican calendar, France attempted to introduce a decimal time system. This had 10 decimal hours in the day, 100 decimal minutes per hour, and 100 decimal seconds per minute. Therefore, the decimal hour was more than twice as long (144 min) as the present hour, the decimal minute was slightly longer than the present minute (86 seconds) and the decimal second was slightly shorter (0.86 sec) than the present second. Clocks were manufactured with this alternate face, usually combined with traditional hour markings. However, it did not catch on, and France discontinued the mandatory use of decimal time on 7 April 1795, although some French cities used decimal time until 1801.

Until the last quarter of the 17th century, hour markings were etched into metal faces and the recesses filled with black wax. Subsequently, higher contrast and improved readability was achieved with white enamel plaques painted with black numbers. Initially, the numbers were printed on small, individual plaques mounted on a brass substructure. This was not a stylistic decision, rather enamel production technology had not yet achieved the ability to create large pieces of enamel. The "13-piece face" was an early attempt to create an entirely white enamel face. As the name suggests, it was composed of 13 enamel plaques: 12 numbered wedges fitted around a circle. The first single-piece enamel faces, not unlike those in production today, began to appear . It is customary for modern advertisements to display clocks and watches set to approximately 10:10 or 1:50, as this V-shaped arrangement roughly makes a smile, imitates a human figure with raised arms, and leaves the watch company's logo unobscured by the hands. In the 1970s, German designer Tian Harlan invented the Chromachron, a wristwatch with a clock face that has no dials but a disc with pie-shaped pattern rotating by the minute over color patterns representing both hours and minutes.

In 2018, some United Kingdom schools were replacing analogue clocks in examination halls with digital ones because an increasing number of pupils were unable to read traditional (non-digital) clocks.