in a special formation for a farewell ceremony. The brigade combat team (BCT) is the basic deployable unit of maneuver in the United States Army|U.S. Army. A brigade combat team consists of one combat arms branch maneuver brigade, and its assigned support and fire units. A brigade is normally commanded by a colonel (O-6) although in some cases a brigadier general (O-7) may assume command. A brigade combat team contains combat support and combat service support units necessary to sustain its operations. BCTs contain organic artillery training and support, received from the parent division artillery (DIVARTY). There are three types of brigade combat teams: infantry, Stryker, and armored. Currently, the U.S. Army is structured around the brigade combat team. In this program, divisions that previously had not deployed individual brigades due to lack of integral support have now been restructured. The 1st Armored Division, 25th Infantry Division, etc. now have the ability to deploy one or more BCTs anywhere in the world. These BCTs are intended to be able to stand on their own, like a division in miniature. The soldiers assigned to a BCT will stay at their assignment for three years; this is intended to bolster readiness and improve unit cohesion. 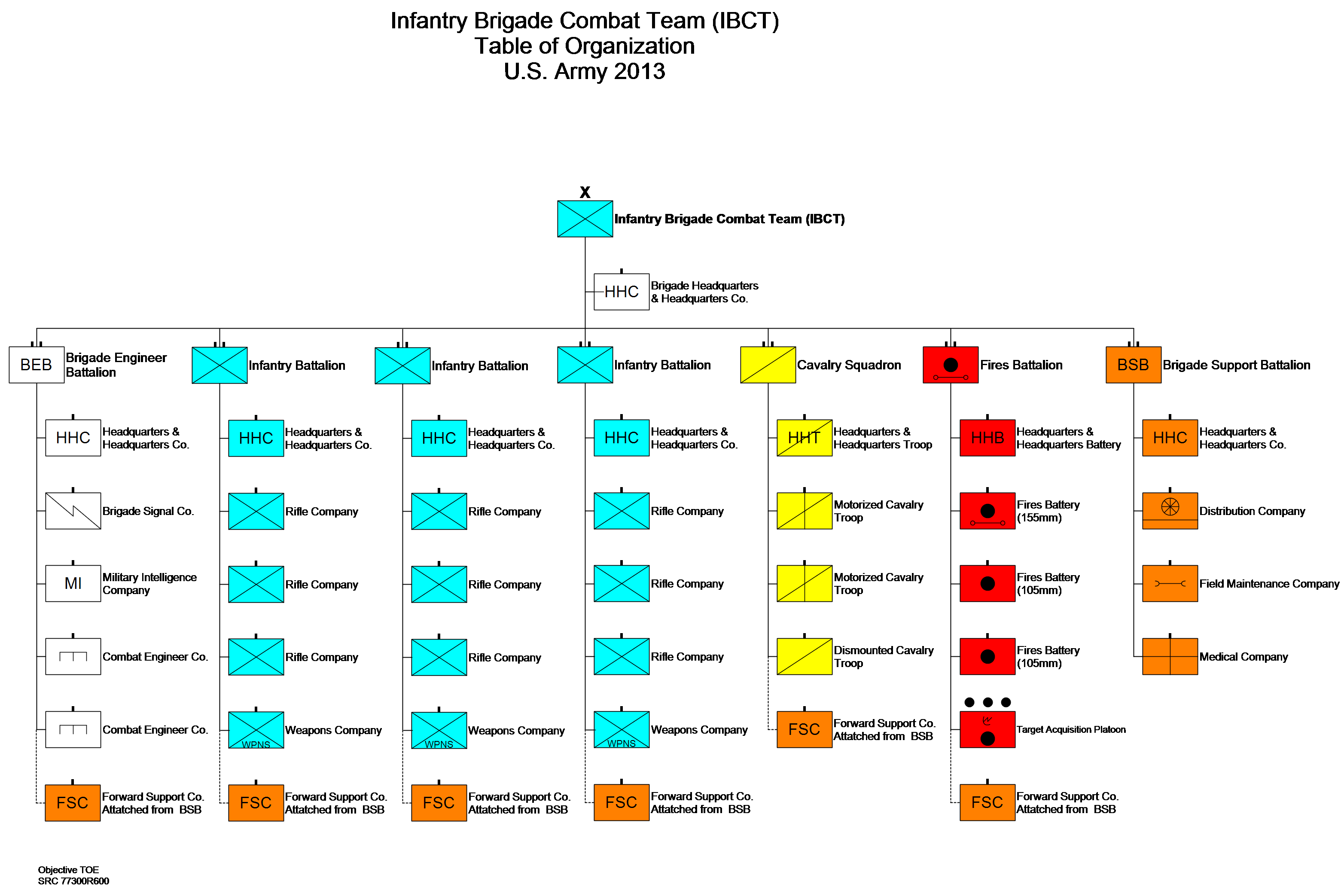 The infantry brigade combat team, as of 2014, contains 4,413 soldiers and is organized around three battalions of infantry. Each type of brigade (light infantry, air assault, or airborne) has the same basic organization. Each infantry brigade is equipped and capable of air assault operations, whether or not it is officially designated as an air assault brigade. Also, most units typically maneuver in HMMWVs when deployed and operate as "motorized infantry" to facilitate speed of movement. The Infantry BCT can conduct entry operations by ground, air, and amphibious means. The infantry brigade combat team consists of seven battalions: one cavalry (reconnaissance) battalion, one brigade support battalion, one engineer battalion, three infantry battalions and one field artillery (fires) battalion. 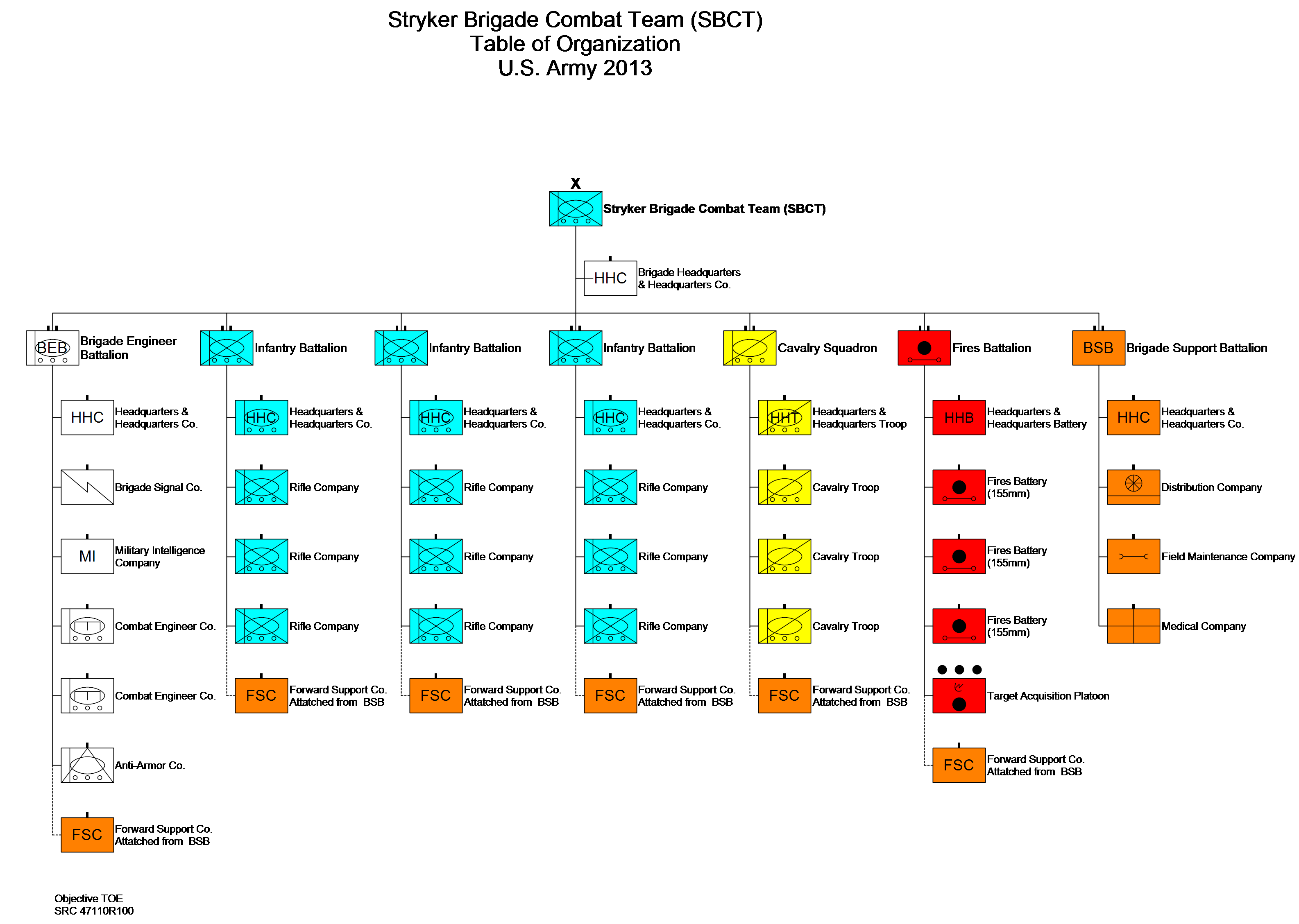 The Stryker brigade combat team (SBCT) is a mechanized infantry force structured around the Stryker eight-wheeled variant of the General Dynamics LAV III. A full Stryker brigade was intended to be C-130 Hercules air transportable into theatre within 96 hours, while a division-sized force is expected to need 120 hours. The Stryker brigade is an organic combined arms unit of lightly-armored, medium-weight wheeled vehicles, and is organized differently from the infantry or armored brigade combat teams. The Stryker brigades are being used to implement network-centric warfare doctrines, and are intended to fill a gap between the United States' highly mobile light infantry and its much heavier armored infantry. The BCT Ground Combat Vehicle Program was the planned successor of the interim armored vehicle before being cancelled in 2014. The team also receives training in chemical, biological, radiological, and nuclear defense (CBRN defense). Each Stryker brigade combat team consists of three infantry battalions, one reconnaissance (cavalry) squadron, one fires (artillery) battalion, one brigade support battalion, one brigade headquarters and headquarters company, and one brigade engineer battalion. A Stryker brigade is made up of more than 300 Stryker vehicles and 4,500 soldiers. Starting in 2015, the anti-tank company was reflagged from the brigade engineer battalion to the cavalry squadron, to form a weapons troop—also incorporating the mobile gun systems from the infantry battalions. 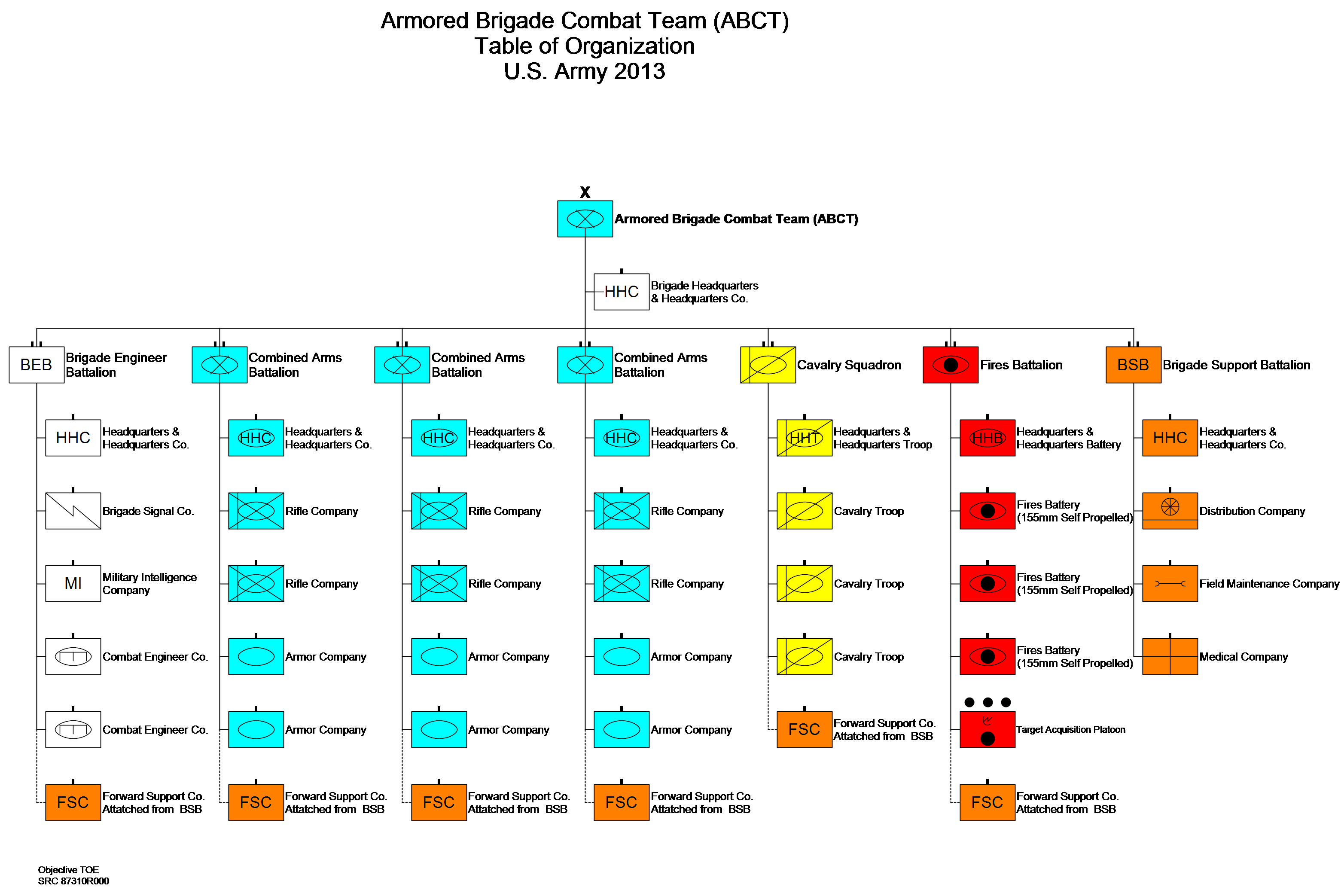 The U.S. Army planned to implement elements of the BCT Modernization program in 2010. This program was planned to utilize elements from the Future Combat Systems program that was canceled in early 2009. The program came in two segments. The first to be implemented would be the ''Early Infantry Brigade Combat Team Capability Package'' (Early IBCT Package), which would modernize infantry brigade combat teams. The second to be implemented would be the ''Follow-on Incremental Capabilities Package'', which could modernize all brigades.