Bratwurst (; plural Bratwürste) is a type of German sausage typically made from pork, and less commonly from beef or veal. The name is derived from the Old High German ''Brätwurst'', from ''brät-'', finely chopped meat, and ''Wurst'', sausage, although in modern German it is often associated with the verb ''braten'', to pan fry or roast. There are many varieties of bratwurst, with some more commonly consumed in certain regions of Germany. Bratwursts are popular in the midwestern United States, Austria, Switzerland, and elsewhere.

While sausage recipes can be found as early as 228 AD, the first documented evidence of the ''Bratwurst'' in Germany dates to 1313 and can be found in the Franconian city of Nuremberg, which is still an internationally renowned center for the production of grilling sausages. 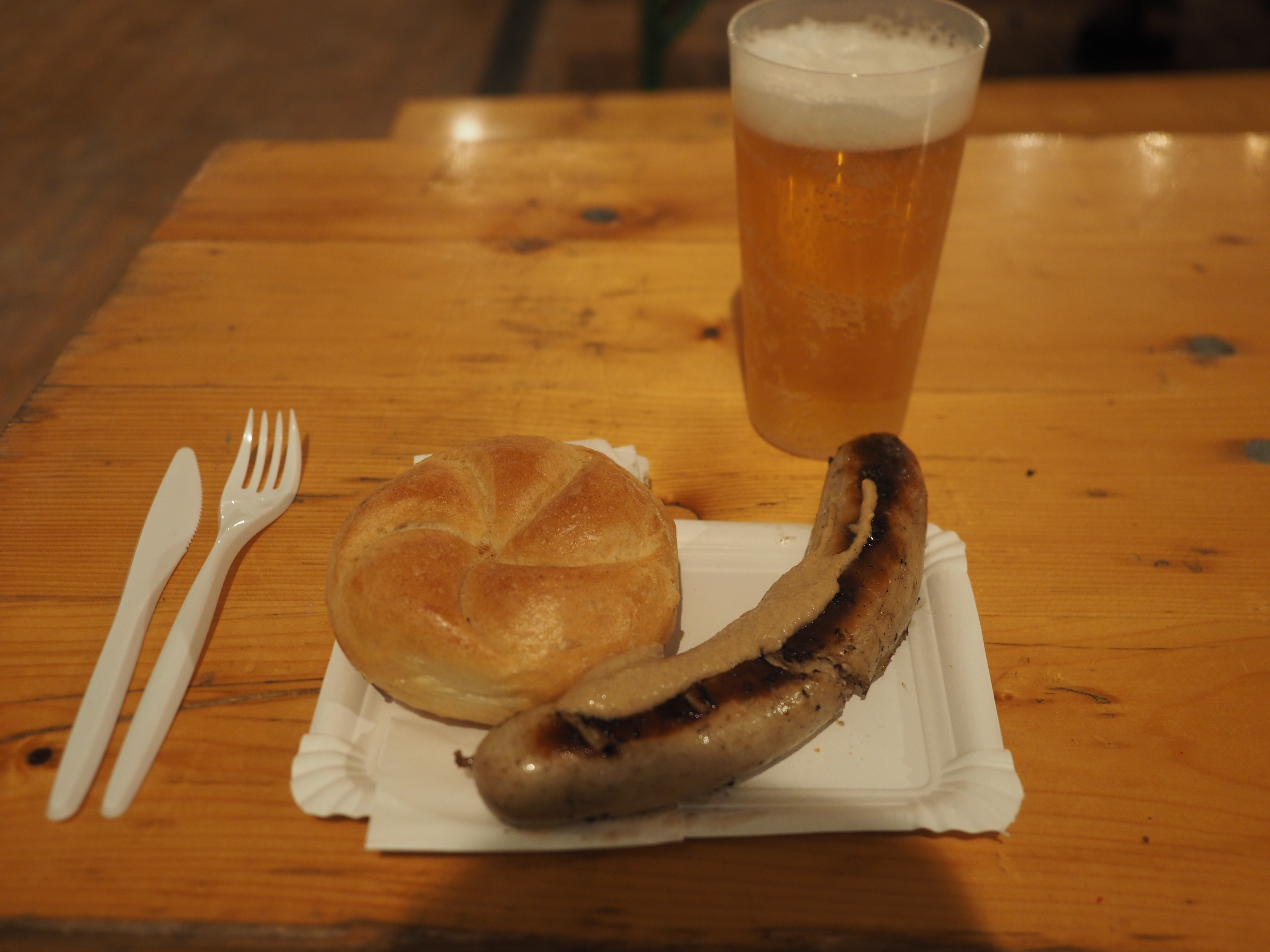 Recipes for the sausage vary by region and even locality; some sources list over 40 different varieties of German cuisine, German bratwurst, many of the best known originating in Franconia (today for the most part situated in northern Bavaria, but still culturally quite distinct), its northern neighbour Thuringia and adjacent areas. How the sausages are served is also locally different, but most commonly they are regarded as a simple snack served with or in a white bread roll made from wheat flour and eaten with Mustard (condiment), mustard. As a pub dish, it is often accompanied by sauerkraut or potato salad and sometimes served with dark, crusty country bread made predominantly from rye flour, less commonly with a ''Brezel'' (pretzel). It is a very popular form of fast food in German-speaking countries, often cooked and sold by street vendors from small stands, and is also traditionally popular with fans at soccer games. 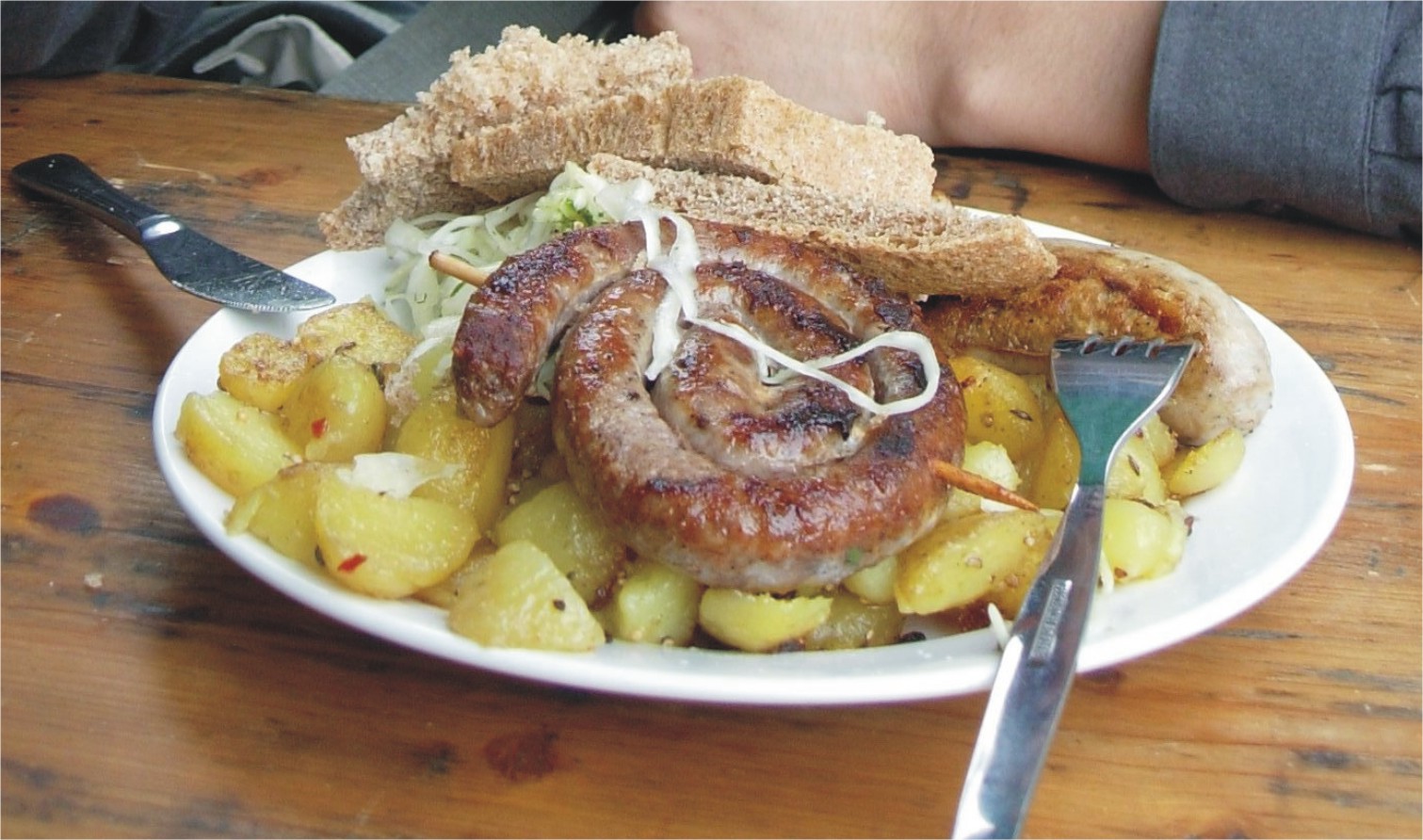 = The Franconian sausage is a relatively long (), thick, coarse sausage, common to the whole Franconian region with slight variations. It dates back to 1313. With marjoram as a characteristic ingredient, it is close in taste to the ''Nürnberger Bratwurst'' but juicier, due to its size and coarseness. The ''Fränkische Bratwurst'' is traditionally served with sauerkraut or potato salad.

= ''Bratwurst'' originating in the city of Coburg in Franconia was first documented there in 1498. It is made from pork and a minimum of 15% beef, seasoned with only salt, pepper, nutmeg, and lemon Zest (ingredient), zest, and bound with raw egg. It is coarse in texture and is about long. Traditionally, it is grilled over pinecones and served in a bread roll (''Brötchen'').

= The ''Kulmbacher Bratwurst'' is a finely-ground Rohwurst from the city of Kulmbach in Upper Franconia. Long and thin, it is made mostly from very finely ground veal, with very little pork. This sausage may be seasoned with salt, white pepper, nutmeg, lemon peel, marjoram, caraway, and garlic. The exact mixture is a closely guarded trade secret of each butcher. Kulmbacher bratwursts are usually pan-fried, or grilled over a wood fire. They are sold and served freshly grilled from vendors' stands in the Marktplatz, in pairs, with or without mustard, on crusty rolls sprinkled with anise. 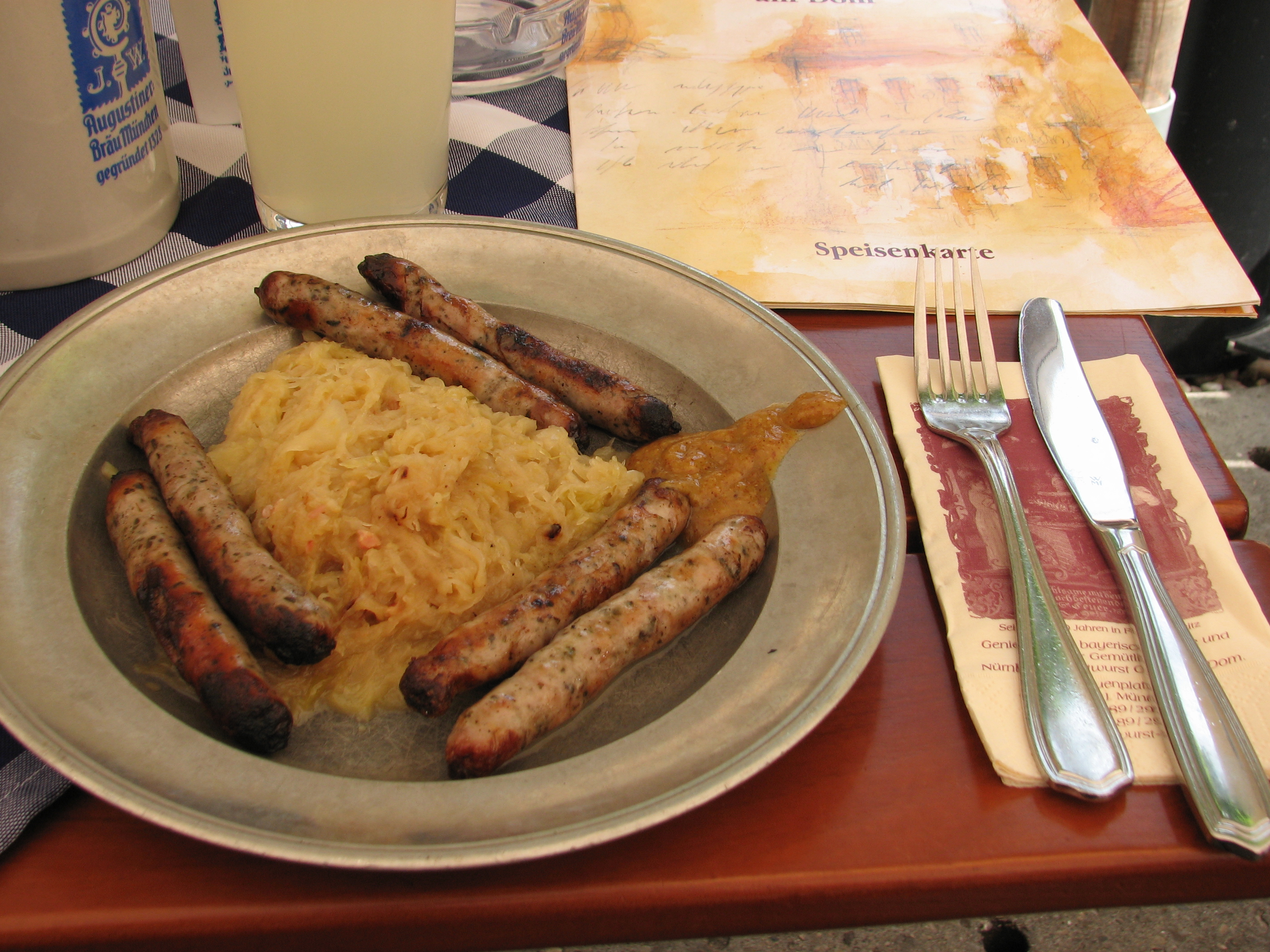 The small, thin bratwurst from Franconia's largest city, Nuremberg, was first documented in 1567; it is long, and weighs between 20 and 25 g. The denominations ''Nürnberger Bratwurst'' and ''Nürnberger Rostbratwurst'' (''Rost'' comes from the grill above the cooking fire) are Protected Geographical Status, Protected Geographical Indications (PGI) under EU law since 2003, and may therefore only be produced in the city of Nürnberg, where an "Association for the Protection of ''Nürnberger Bratwürste''" was established in 1997. Pork-based and typically seasoned with fresh marjoram which gives them their distinctive flavour, these sausages are traditionally grilled over a beechwood fire. As a main dish three to six pairs are served on a pewter plate with either sauerkraut or potato salad, and accompanied by a dollop of horseradish or mustard. They are also sold as a snack by street vendors as ''Drei im Weckla'' (three in a bun; the spelling ''Drei im Weggla'' is also common, ''Weggla''/''Weckla'' being the word for "bread roll" in the Nuremberg dialect), with mustard. Another way of cooking Nuremberg sausages is in a spiced vinegar and onion stock; this is called Saure Zipfel, ''Blaue Zipfel'' (blue lobes).

= The ''Würzburger Bratwurst'', also known as the ''Winzerbratwurst'', comes from the city of Würzburg in Franconia. Its size is similar to the ''Thüringer Rostbratwurst'', but its ingredients include white Franconia (wine region), Franken-Wine. 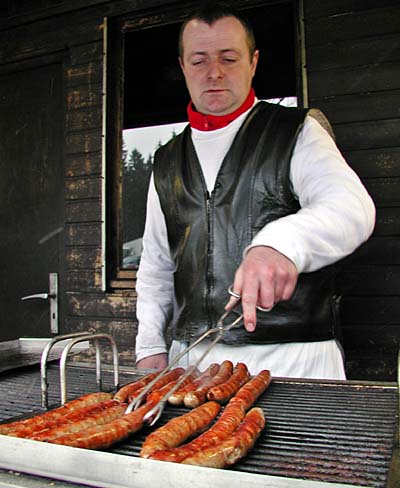 The ''Thüringer Rostbratwurst'' is a spicy sausage from Thuringia. It is thin and long. It is traditionally grilled over a charcoal fire and eaten with mustard and bread. The name ''Thüringer Rostbratwurst'' is also recognised as a PGI under EU law. Triggered by the discovery in 2000 of an account entry of 1404 first mentioning the ''Bratwurst'' in Thuringia in the town of Arnstadt, the association "Friends of the ''Thuringian Bratwurst''" was founded in 2006. In the same year, the association established the ''Erstes Deutsches Bratwurstmuseum'' (First German Bratwurst Museum) in the village of Wachsenburggemeinde, Holzhausen. A two-metre-high wooden monument of a ''Bratwurst'' in a bun on a local traffic roundabout advertises the museum.

= The -long ''Nordhessische Bratwurst'' (from northern Hessen) is similar to the ''Thüringer Rostbratwurst'' in taste. It is made from coarsely ground pork and is heavily seasoned. Traditionally, it is grilled over a wood fire and served on a cut-open roll with mustard. 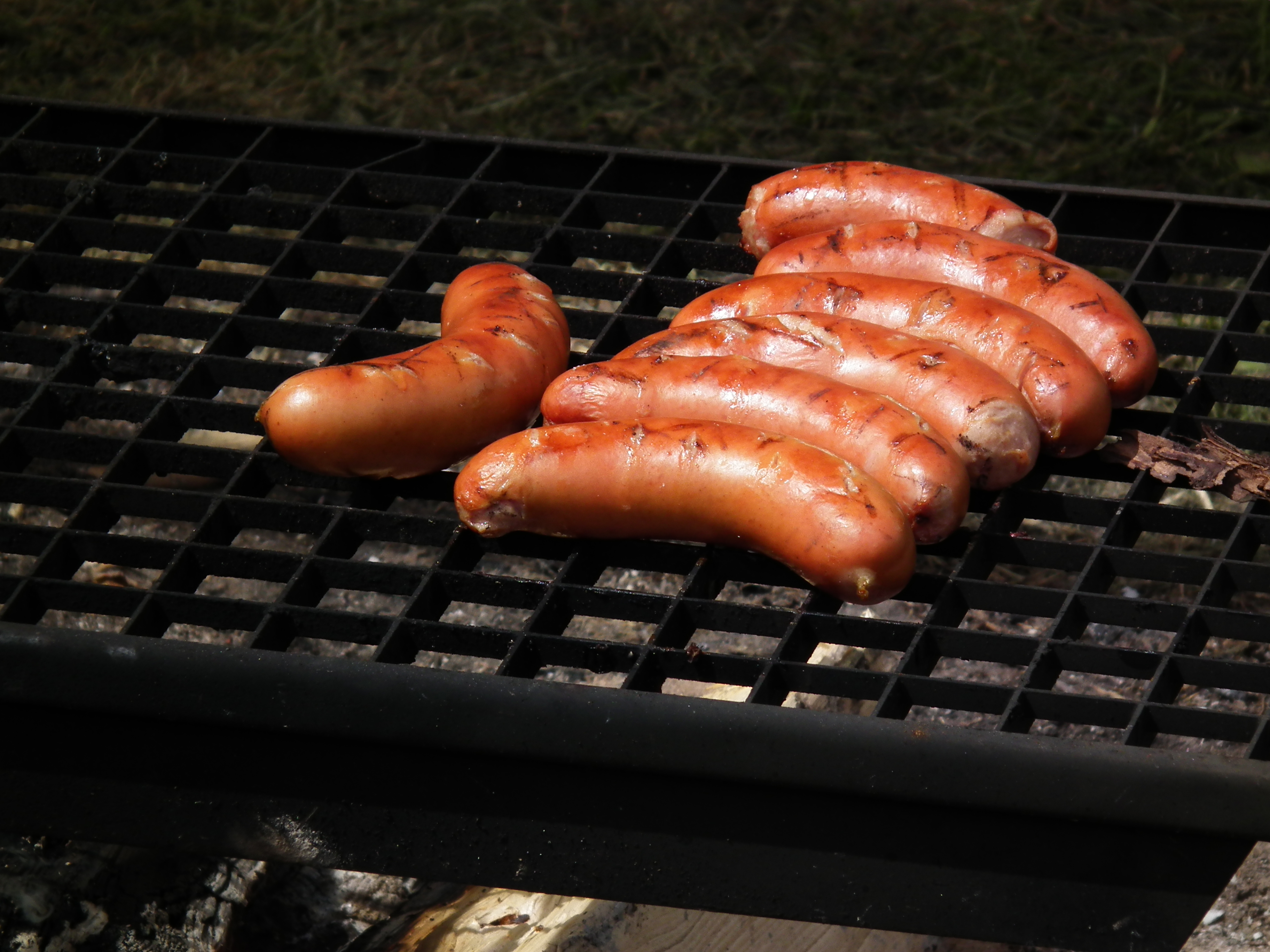 The ''Rote Wurst'' (red sausage) is a favorite ''Bratwurst'' of the Swabian region. It is similar to the ''Bockwurst'', and is made from finely ground pork and bacon, and has a spicy taste. To prevent splitting during grilling or pan frying, an X is cut into the ends of the sausage, which opens during cooking. Sometimes a row of x-shaped cuts are made along its length.

In 1438, bratwurst started to become popular in eastern Switzerland, especially in St. Gallen. "St. Galler bratwurst" has been famous since then.

Bratwurst, often shortened to "brat" in American English, is a common type of sausage in the United States, especially in the Upper Midwest, Upper Midwestern region; the home to many people of German Americans, German-American ethnicity. Wisconsin, where the largest ancestry group is German, is known for its bratwursts. Brats are also popular in other Upper Midwestern states such as Minnesota, Missouri, Ohio, Indiana and Iowa, as well as cities with large populations like New York, Chicago, and Philadelphia. Originally brought to North America by German immigrants, it is a common sight at summer cookouts, along with hot dogs. Many grocery stores and butcher shops sell varieties with popular additions such as cheddar cheese and jalapeño peppers. Wisconsin is the home of the "beer brat", where the brats are simmered in beer (generally a mixture of a pilsner style beer with butter and onions) before or after grilling over charcoal. Bratwurst was popularized in Sheboygan County, Wisconsin, in the 1920s. In general, each local butcher shop would take orders and hand make bratwurst fresh to be picked up on a particular day. The fat content of the sausages was substantial, making daily pick up necessary to avoid spoilage; some of the fat is lost on cooking over charcoal. Bratwurst has also become popular as a mainstay of sports stadiums, especially baseball parks, after Bill Sperling introduced bratwurst to Major League Baseball in Milwaukee County Stadium in 1954, when the Atlanta Braves, Boston Braves moved to Milwaukee. The brats, which sold for 35 cents, were grilled and placed into a container of a special tomato sauce with green pepper and onions before being served. The bratwursts were so popular, Sperling said, that Duke Snider of the History of the Brooklyn Dodgers, Brooklyn Dodgers took a case back to New York City. Miller Park (Milwaukee), Miller Park in Milwaukee sells more bratwurst than hot dogs. Current Miller Park (Milwaukee), Miller Park foodservice provider Delaware North (through their Sportservice subsidiary) markets Secret Stadium Sauce at retail as a complement to bratwurst. Every year, during the Memorial Day weekend, the city of Madison, Wisconsin, hosts the Brat Fest, which is billed as the "world's largest bratwurst festival". The town of Bucyrus, Ohio, (which calls itself the "Bratwurst Capital of America") has held the three-day Bucyrus Bratwurst Festival annually since 1967.