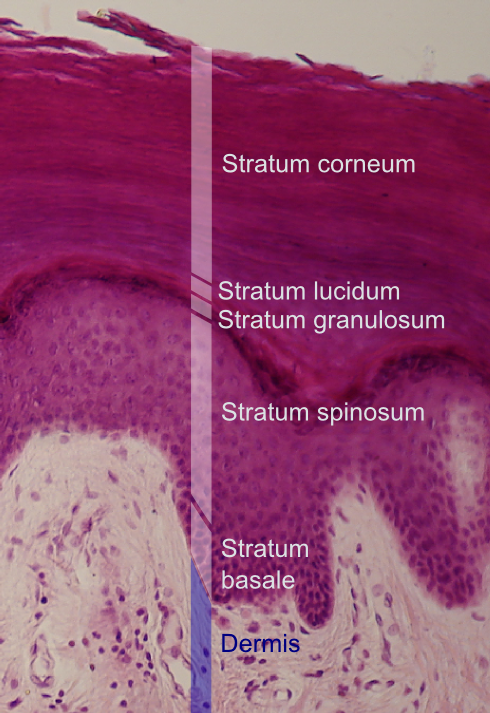 The ''stratum basale'' (basal layer, sometimes referred to as ''stratum germinativum'') is the deepest layer of the five layers of the epidermis, the external covering of skin in mammals. The ''stratum basale'' is a single layer of columnar or cuboidal basal cells. The cells are attached to each other and to the overlying stratum spinosum cells by desmosomes and hemidesmosomes. The nucleus is large, ovoid and occupies most of the cell. Some basal cells can act like stem cells with the ability to divide and produce new cells, and these are sometimes called basal keratinocyte stem cells. Others serve to anchor the epidermis glabrous skin (hairless), and hyper-proliferative epidermis (from a skin disease). They divide to form the keratinocytes of the stratum spinosum, which migrate superficially. Other types of cells found within the ''stratum basale'' are melanocytes (pigment-producing cells) and Merkel cells (touch receptors).

* List of keratins expressed in the human integumentary system