Bamboo shoots or bamboo sprouts are the edible shoots (new bamboo culms that come out of the ground) of many bamboo species including ''Bambusa vulgaris'' and ''Phyllostachys edulis''. They are used as vegetables in numerous Asian dishes and broths. They are sold in various processed shapes, and are available in fresh, dried, and canned versions. Raw bamboo shoots contain cyanogenic glycosides, natural toxins also contained in cassava. The toxins must be destroyed by thorough cooking and for this reason fresh bamboo shoots are often boiled before being used in other ways. The toxins are also destroyed in the canning process.

Shoots of several species of bamboo are harvested for consumption: *''Phyllostachys edulis'' (孟宗竹, 江南竹) produces very large shoots up to 2.5 kilos. The shoots of this species are called different names depending on when they are harvested. **Winter shoots (冬筍, 鞭筍) are smaller in size, up to 1 kg in weigh per harvested shoot. The flesh is tender and palatable and commercially quite important; they are harvested in November and December in Taiwan. **"Hairy" shoots (毛竹筍) are larger in size, but due to their toughness and bitter taste, they are generally used to make dried bamboo shoots. They are harvested between March and May in Taiwan. *''Phyllostachys bambusoides'' (桂竹) produces shoots that are slender and long with firm flesh. Commonly consumed fresh, they are also made into dried bamboo shoots. *''Dendrocalamus latiflorus'' (麻竹) produces shoots that are large with flesh that is fibrous and hard. As such, they are suitable mainly for canning and drying. *''Bambusa oldhamii'' (綠竹) produces valuable shoots that are large with tender and fragrant flesh. They are usually sold fresh and in season between late spring and early fall. Their availability depends on local climate. These shoot are also available in cans when not in season. *''Bambusa odashimae'' (烏腳綠竹) is considered similar to ''B. oldhamii'', but highly prized due to its crisp flesh similar to Asian pears. It is produced mainly in Taitung and Hualien and consumed fresh. *''Fargesia spathacea'' (箭竹) produces flavourful long, thin, tender sprouts that can be eaten fresh or canned. *''Bambusa blumeana'' (刺竹) produces inferior shoots with a coarse and looser textures than other bamboo shoots and are eaten when others are not in season in Taiwan. 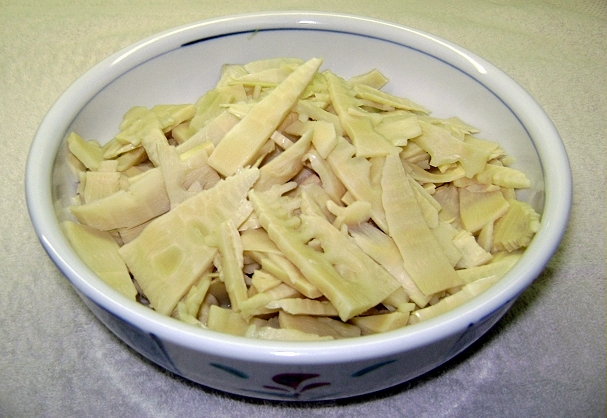 In certain parts of Japan, China and Taiwan, shoots from the giant timber bamboo ''Bambusa oldhamii'' are harvested in spring or early summer. Young shoots from this species are highly sought after due to their crisp texture and sweet taste. Older shoots, however, have an acrid flavor and should be sliced thin and boiled in a large volume of water several times. The sliced bamboo is edible after boiling. ''B. oldhamii'' is more widely known as a noninvasive landscaping bamboo. Pickled bamboo, used as a condiment, may also be made from the pith of the young shoots.

In Nepal, they are used in dishes which have been well known in Nepal for centuries. A popular dish is ''tama'' (fermented bamboo shoot), with potato and beans. An old popular song in Nepali mentions ''tama'' as "my mother loves vegetable of recipe containing potato, beans, and ''tama''". Some varieties of bamboo shoots commonly grown in the Sikkim Himalayas of India are ''Dendrocalamus hamiltonii'', ''Dendrocalamus sikkimensis'' and ''Bambusa tulda'' locally known as ''choya bans'', ''bhalu bans'' and ''karati bans''. These are edible when young. These bamboo shoots are collected, defoliated and boiled in water with turmeric powder for 10–15 minutes to remove the bitter taste of the bamboo after which the ''tama'' is ready for consumption. ''Tama'' is commonly sold in local markets during the months of June to September when young bamboo shoots sprout. In Assam, bamboo shoots are part of traditional Assamese cuisine. They are called ''khorisa'' and ''bah gaj'' in Assamese and "hen-up" in Karbi in Assam. In Karnataka, Andhra Pradesh, and Northern Tamilnadu, the bamboo shoots are used as a special dish during the monsoons (due to seasonal availability). It is common in Tulunadu and Malnad regions. It goes by the name ''kanile'' or kalale'' in Tulu, ''Veduru Kommulu'' in Telugu, and ''Moongil Kuruthu'' in Tamil. The shoots are usually sliced and soaked in water for two to three days, after which the water is drained and replenished each day to extricate and remove toxins. It is also used as a pickle. It is consumed as a delicacy by all communities in the region. In the Diyun region of Arunachal Pradesh, the Chakma people call them ''bashchuri''. The fermented version is called ''medukkeye'', and is often served fried with pork. The bamboo shoots can also be fermented and stored with vinegar. In Jharkhand, India, the bambo shoots used as vegetable. Young shoot and stored shoots known as ''Karil'' and ''Shandhna'' respectively. In the western part of Odisha, India, they are known as ''Karadi'' and are used in traditional curries such as Ambila, pithou bhaja and pickle. In monsoon, it can be abundantly found in Bamboo forest of Karlapat wildlife sanctuary and mostly prepared in homes using mustard paste. They can be stored for months in an air tight container. They are also dried in sun increasing their shelf life and these dried shoots are called ''Hendua''. The dried shoots are used in curries of roasted fish, called ''Poda Macha''. In Nagaland (India), bamboo shoots are both cooked and eaten as a fresh food item or fermented for a variety of culinary uses. Fermented bamboo shoot is commonly known as ''bas tenga''. Cooking pork with a generous portion of fermented bamboo shoot is very popular in Naga cuisine. In Manipur (India), they are known as ''u-soi''. They are also fermented and preserved after which they are known as ''soibum''. They are used in a wide variety of dishes – among which are ''iromba, ooti'' and ''kangshu etc.'' The fermented bamboo shoot which is preserved for many months is known as soijin. Soijin can be stored upto 10 years in Andro village. Generally, soijin or usoi is in a big basket made by bamboo. However, they are stored in earthen pot in Andro village. In Meghalaya Bamboo shoots are either used fresh or fermented and made into pickles, soups with pork or dried fish, or curried and seasoned with seasame seeds or made into a sauce with fermented fish. It sometimes cooked along with yam leaves and dried fish. In Chittagong Hill Tracts, Bangladesh, bamboo shoots are a traditional food of the indigenous Jumma people. The preparation of their dishes consist of several steps. First, bamboo shoots are collected from the bamboo forest then defoliated and boiled in water. Afterwards, the bamboo shoot is prepared with shrimp paste, chili, garlic paste, and salt.

In Indonesia, they are sliced thinly to be boiled with coconut milk and spices to make ''gulai rebung''. Other recipes using bamboo shoots are ''sayur lodeh'' (mixed vegetables in coconut milk) and ''lun pia'' (sometimes written ''lumpia'': fried wrapped bamboo shoots with vegetables). The shoots of some species contain cyanide that must be leached or boiled out before they can be eaten safely. Slicing the bamboo shoots thinly assists in this leaching. In Filipino cuisine, the shoots are commonly called ''labóng'' (other names include ''rabong'', ''dabong'', or ''tambo''). The two most popular dishes for these are ''ginataáng labóng'' (shoots in coconut milk and chilies) and ''dinengdeng na labóng'' (shoots in fish ''bagoóng'' and stew of string beans, ''saluyot'', and ''tinapa''). They are also sautéed alone or with other ingredients as in ''paklay'', or cooked as fried or fresh ''lumpia''. Bamboo shoots are also preserved as ''atchara'', traditional sweet pickles that are often made from papaya.