Aquaculture (less commonly spelled aquiculture), also known as aquafarming, is the farming of fish, crustaceans, mollusks, aquatic plants, algae, and other organisms. Aquaculture involves cultivating freshwater and saltwater populations under controlled conditions, and can be contrasted with commercial fishing, which is the harvesting of wild fish. Mariculture commonly known as marine farming refers to aquaculture practiced in marine environments and in underwater habitats, opposed to in freshwater. According to the Food and Agriculture Organization (FAO), aquaculture "is understood to mean the farming of aquatic organisms including fish, molluscs, crustaceans and aquatic plants. Farming implies some form of intervention in the rearing process to enhance production, such as regular stocking, feeding, protection from predators, etc. Farming also implies individual or corporate ownership of the stock being cultivated." The reported output from global aquaculture operations in 2014 supplied over one half of the fish and shellfish that is directly consumed by humans; however, there are issues about the reliability of the reported figures. Further, in current aquaculture practice, products from several pounds of wild fish are used to produce one pound of a piscivorous fish like salmon. Particular kinds of aquaculture include fish farming, shrimp farming, oyster farming, mariculture, algaculture (such as seaweed farming), and the cultivation of ornamental fish. Particular methods include aquaponics and integrated multi-trophic aquaculture, both of which integrate fish farming and aquatic plant farming. The Food and Agriculture Organization describes aquaculture as one of the industries most directly affected by climate change and its impacts. Some forms of aquaculture, such as seaweed farming, have the opportunity to be part of climate change mitigation, while other forms of aquaculture have negative impacts on the environment, such as through nutrient pollution or disease transfer to wild populations. 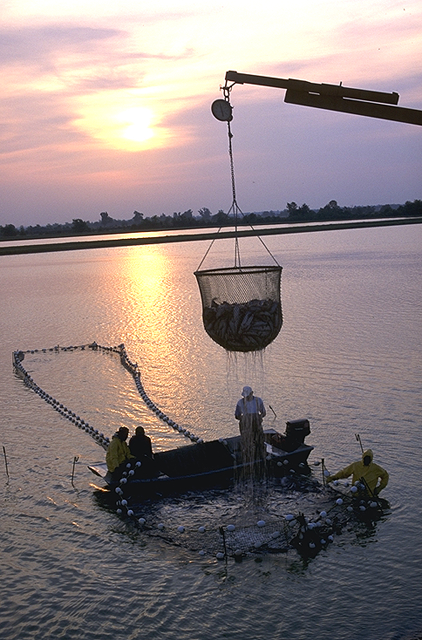 The Gunditjmara, the local Aboriginal Australian people in south-western Victoria, Australia, may have raised short-finned eels as early as about 4,580 BCE (6,530 years BP). Evidence indicates they developed about of volcanic floodplains in the vicinity of Lake Condah into a complex of channels and dams, and used woven traps to capture eels, and preserve them to eat all year round. The Budj Bim Cultural Landscape, a World Heritage Site, is thought to be one of the oldest aquaculture sites in the world. Oral tradition in China tells of the culture of the common carp, ''Cyprinus carpio'', as long ago as 2000–2100 BCE (around 4,000 years BP), but the earliest significant evidence lies in the literature, in the earliest monograph on fish culture called ''The Classic of Fish Culture'', by Fan Li, written around 475 BCE (c.2475 BP). Another ancient Chinese guide to aquaculture was by Yang Yu Jing, written around 460 BCE, showing that carp farming was becoming more sophisticated. The Jiahu site in China has circumstantial archeological evidence as possibly the oldest aquaculture locations, dating from 6200BCE (about 8,200 years BP), but this is speculative. When the waters subsided after river floods, some fish, mainly carp, were trapped in lakes. Early aquaculturists fed their brood using nymphs and silkworm faeces, and ate them. Ancient Egyptians might have farmed fish (especially Gilt-head bream) from Lake Bardawil about 1,500 BCE (3,520 years BP), and they traded them with Canaan.