"Alarm Call" is a song recorded by Icelandic singer
Björk Björk Guðmundsdóttir ( ; ; born 21 November 1965) is an Icelandic singer, songwriter, record producer, actress, and DJ. Over her four-decade career, she has developed an eclectic Eclectic may refer to: Music * Eclectic (Eric Johnson an ...

for her third studio album ''
Homogenic ''Homogenic'' is the third studio album by Icelandic recording artist Björk. It was released on 20 September 1997 by One Little Indian Records. Produced by Björk, Mark Bell (British musician), Mark Bell, Guy Sigsworth, Howie B, and Markus Drav ...
'' (1997). It was released as the fourth single from the album, peaking at number 33 in the United Kingdom. The sped-up "radio version" of the song (which was also featured in the video) was used in the 1999 film ''
The Mod Squad ''The Mod Squad'' is an American crime drama series, originally broadcast for five seasons on American Broadcasting Company, ABC from September 24, 1968, to March 1, 1973. It starred Michael Cole (actor), Michael Cole as Peter "Pete" Cochran, Pegg ...
''.

The song, originally labelled "Jacko" on the ''Homogenic'' demo tape, speaks of reawakening through music. Björk explained: "I think that music has the power to change the things, and that's what I wanted to show on Alarm Call". It is the only single from ''Homogenic'' that was not included on ''
Greatest Hits A greatest hits album or best-of album is a type of compilation album A compilation album comprises Album#Tracks, tracks, which may be previously released or unreleased, usually from several separate recordings by either one or several Perfor ...
''.

The first music video for "Alarm Call" was directed by Paul White from Me Company, the design firm that produced the artwork of ''Homogenic'', ''Debut'' and ''Post'', and their respective singles, and it featured Björk in a similar dress to the one featured on the ''Homogenic'' album cover along with a dance scene in the Los Angeles Subway. However, Björk was not pleased with the result and a second video was directed by fashion designer
Alexander McQueen Lee Alexander McQueen, Order of the British Empire, CBE (17 March 1969 – 11 February 2010) was an English fashion designer and couturier. He founded his own Alexander McQueen (brand), Alexander McQueen label in 1992, and was chief designer at ...
and filmed in October 1998, over a two-day period in London. She told
MTV News MTV News is the news production division of MTV MTV (originally an initialism of Music Television) is an American cable channel that launched on August 1, 1981. Based in New York City, it serves as the flagship property of the ViacomCBS ...
that she felt that the music video industry needed a "spank on the bum", and that McQueen was the man to do the video. "I haven't seen many fashion shows in my life, but you go to his shows and you come out feeling like anything is possible"; she went on to describe McQueen as a "guy with a powerful and fluid mind who could direct films, build castles, and write music". He wrote up a nearly one-hundred-page treatment of his ideas for the video. It features Björk floating on a raft on a river in the jungle and her scenes are intercut with footage of snakes, crocodiles, and other animals, with Björk playing with them. The version of the song used in the video is the radio mix by Andy Bradfield and Mark Bell.

These are the formats and track listings of major single releases of "Alarm Call". *UK 12" single #1 #"Alarm Call" (
Bjeck 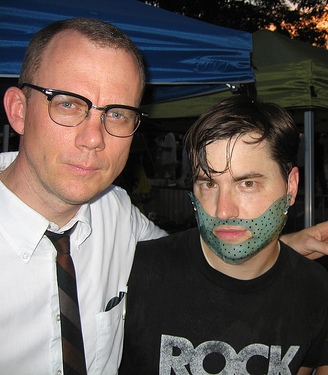