Click Here for Items Related To - administrative divisions of China


Due to China's large population and geographical area, the administrative divisions of China have consisted of several levels since ancient era. The constitution of China provides for three ''de jure'' levels of government. Currently, however, there are five practical (''de facto'') levels of local government: the provincial (province, autonomous region, municipality, and special administrative region), prefecture, county, township, and village. Since the 17th century, provincial boundaries in China have remained largely static. Major changes since then have been the reorganization of provinces in the northeast after the establishment of the People's Republic of China and the formation of autonomous regions, based on Soviet ethnic policies. The provinces serve an important cultural role in China, as people tend to identify with their native province.

The Constitution of China provides for four levels: the provincial (province, autonomous region, municipality, and special administrative region), the prefectural (prefecture-level city fficially "city with district-level divisions" () and "city without district-level divisions" () autonomous prefecture, prefecture dditional divisionand league he alternative name of “prefecture” which is used in [[Inner Mongolia]), county (district, county, county-level city [officially “city without district-level divisions”], autonomous county, banner [the alternative name of “county” which is used in Inner Mongolia], autonomous banner he alternative name of “autonomous county” which is used in Inner Mongolia special district dditional division forestry area dditional division and township. The fifth level which is commonly known as “village level” is actually not an administrative level. The Constitution of China designs the fifth level as “basic level autonomy”. , China administers 33 provincial-level regions, 334 prefecture-level divisions, 2,862 county-level divisions, 41,034 township-level administrations, and 704,382 basic level autonomies. Each of the levels (except "special administrative regions") correspond to a level in the Civil service of the People's Republic of China.

This table summarizes the divisions of the area administered by the People's Republic of China .

The People's Republic of China (PRC) administers 34 provincial-level divisions () or first-level divisions (), including 22 provinces, 5 autonomous regions, 4 municipalities, and 2 special administrative regions and 1 claimed province: Provinces are theoretically subservient to the PRC central government, but in practice provincial officials have large discretion with regard to economic policy. Unlike the United States, the power of the central government was (with the exception of the military) not exercised through a parallel set of institutions until the early 1990s. The actual practical power of the provinces has created what some economists call federalism with Chinese characteristics. Most of the provinces, with the exception of the provinces in the northeast, have boundaries which were established long ago in the Yuan, Ming, and Qing dynasties. Sometimes provincial borders form cultural or geographical boundaries. This was an attempt by the imperial government to discourage separatism and warlordism through a divide and rule policy. Nevertheless, provinces have come to serve an important cultural role in China. People tend to be identified in terms of their native provinces, and each province has a stereotype that corresponds to their inhabitants. The most recent administrative changes have included the elevation of Hainan (1988) and Chongqing (1997) to provincial level status, and the creation of Hong Kong (1997) and Macau (1999) as Special administrative regions. Provincial level governments vary in details of organization:

The basic level autonomy serves as an organizational division (census, mail system) and does not have much importance in political representative power. Basic local divisions like neighborhoods and communities are not informal like in America, but have defined boundaries and elected heads (one per area): In urban areas, every subdistrict of a district of a city administers many communities or residential committees. Each of them have a residential committee to administer the dwellers of that neighborhood or community. Rural areas are organized into village committees or villager groups. A "village" in this case can either be a natural village, one that spontaneously and naturally exists, or a virtual village, which is a bureaucratic entity.

Five cities formally on prefectural level have a special status in regard to planning and budget. They are separately listed in the five-year and annual state plans on the same level as provinces and national ministries, making them economically independent of their provincial government. These cities specifically designated in the state plan () are * Dalian (Liaoning) * Ningbo (Zhejiang) * Qingdao (Shandong) * Shenzhen (Guangdong) * Xiamen (Fujian) In terms of budget authority, their governments have the ''de facto'' status of a province, but their legislative organs (National People's Congress and Chinese People's Political Consultative Conference) and other authorities not related to the economy are on the level of a prefecture and under leadership of the province. Some other large prefecture-level cities, known as sub-provincial cities, are ''half a level'' below a province. The mayors of these cities have the same rank as a vice governor of a province, and their district governments are half a rank higher than those of normal districts. The capitals of some provinces (seat of provincial government) are sub-provincial cities. In addition to the five cities specifically designated in the state plan, sub-provincial cities are: * Harbin (Heilongjiang) * Changchun (Jilin) * Shenyang (Liaoning) * Jinan (Shandong) * Nanjing (Jiangsu) * Hangzhou (Zhejiang) * Guangzhou (Guangdong) * Wuhan (Hubei) * Chengdu (Sichuan) * Xi'an (Shaanxi) A similar case exists with some county-level cities. Some county-level cities are given more autonomy. These cities are known as sub-prefecture-level cities, meaning that they are given a level of power higher than a county, but still lower than a prefecture. Such cities are also ''half a level'' higher than what they would normally be. Sub-prefecture-level cities are often not put into any prefecture (i.e. they are directly administered by their province). Examples of sub-prefecture-level cities include Jiyuan (Henan province), Xiantao, Qianjiang and Tianmen (Hubei), Golmud (Qinghai), Manzhouli (Inner Mongolia), Shihanza, Tumushuk, Aral, and Wujiaqu (Xinjiang). Some districts are also placed at ''half a level'' higher that what it should be. Examples are Pudong, Shanghai and Binhai, Tianjin. Although its status as a district of a municipality would define it as prefecture-level, the district head of Pudong is given sub-provincial powers. In other words, it is ''half a level'' higher than what it would normally be.


Ambiguity of the word "city" in China 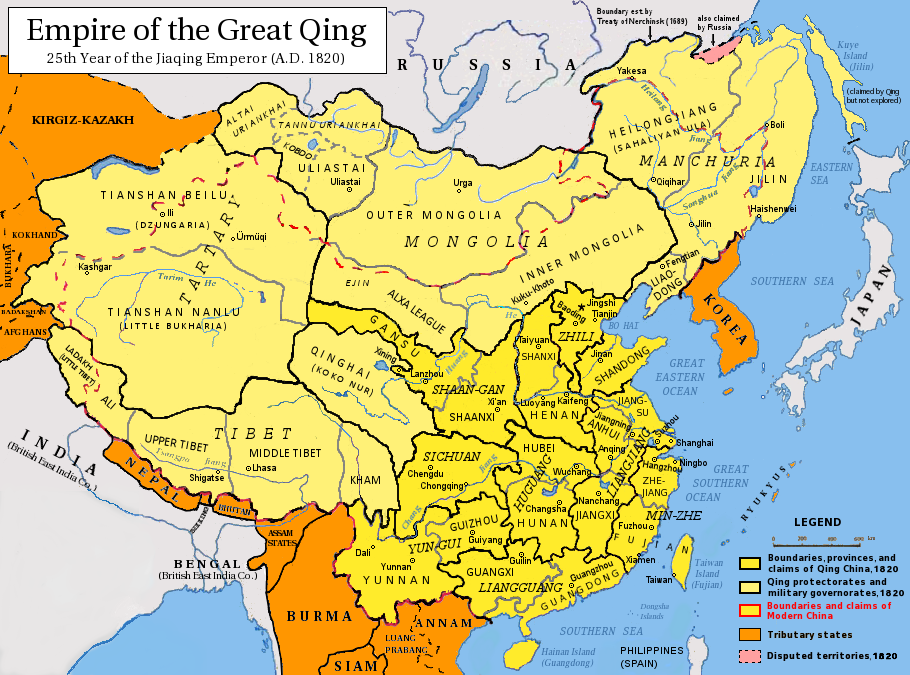 Before the establishment of the Qin Dynasty, China was ruled by a network of kings, nobles, and tribes. The rivalry of these groups culminated in the Warring States period, and the state of Qin eventually emerged dominant. The Qin Dynasty was determined not to allow China to fall back into disunity, and therefore designed the first hierarchical administrative divisions in China, based on two levels: ''jùn'' commanderies and ''xiàn'' counties. The Han Dynasty that came immediately after added ''zhōu'' (usually translated as "provinces") as a third level on top, forming a three-tier structure. The Sui Dynasty and Tang Dynasty abolished commanderies, and added circuits (''dào'', later ''lù'' under the Song and Jin) on top, maintaining a three-tier system that lasted through the 13th century. (As a second-level division, ''zhou'' are translated as "prefectures".) The Mongol-established Yuan Dynasty introduced the modern precursors to provinces, bringing the number of levels to four. This system was then kept more or less intact until the Qing Dynasty, the last imperial dynasty to rule China. The Republic of China streamlined the levels to just provinces and counties in 1928, and made the first attempt to extend political administration beyond the county level by establishing townships below counties. This was also the system officially adopted by the People's Republic of China in 1949, which defined the administrative divisions of China as three levels: provinces, counties, and townships. In practice, however, more levels were inserted. The ROC government soon learned that it was not feasible for a province to directly govern tens and sometimes hundreds of counties. Started from Jiangxi province in 1935, prefectures were later inserted between provinces and counties. They continued to be ubiquitously applied by the PRC government to nearly all areas of China until the 1980s. Since then, most of the prefectures were converted into prefecture-level cities. Greater administrative areas were inserted on top of provinces by the PRC government, but they were soon abolished, in 1954. District public offices were inserted between counties and townships; once ubiquitous as well, they are currently being abolished, and very few remain. The most recent major developments have been the establishment of Chongqing as a municipality and the creation of Hong Kong and Macau as special administrative regions.

In recent years there have been calls to reform the administrative divisions and levels of China. Rumours of an impending major reform have also spread through various online bulletin boards. The district public offices is an ongoing reform to remove an extra level of administration from between the county and township levels. There have also been calls to abolish the prefecture level, and some provinces have transferred some of the power prefectures currently hold to the counties they govern. There are also calls to reduce the size of the provinces. The ultimate goal is to reduce the different administration levels from five to three (Provincial level, County level, Village level), reducing the amount of corruption as well as the number of government workers, in order to lower the budget.