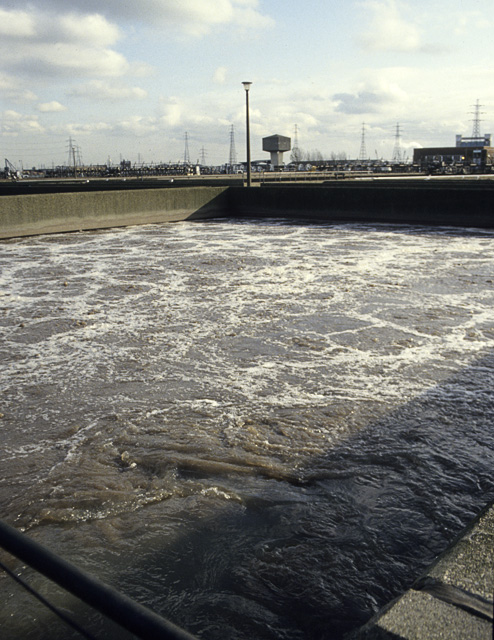 The activated sludge process is a type of wastewater treatment process for treating sewage or industrial wastewaters using aeration and a biological floc composed of bacteria and protozoa. The general arrangement of an activated sludge process for removing carbonaceous pollution includes the following items: An aeration tank where air (or oxygen) is injected in the mixed liquor. This is followed by a settling tank (usually referred to as "final clarifier" or "secondary settling tank") to allow the biological flocs (the sludge blanket) to settle, thus separating the biological sludge from the clear treated water. 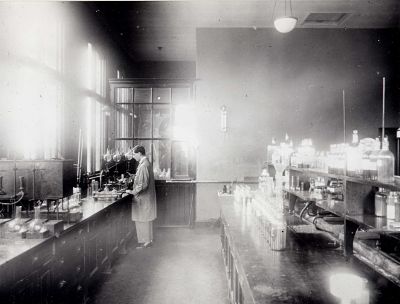 The activated sludge process was discovered in 1913 in the United Kingdom by two engineers, Edward Ardern and W.T. Lockett, who were conducting research for the Manchester Corporation Rivers Department at Davyhulme Sewage Works. This development led to arguably the single most significant improvement in public health and the environment during the course of the century. In 1912, Dr. Gilbert Fowler, a scientist at the University of Manchester, observed experiments being conducted at the Lawrence Experiment Station at Massachusetts involving the aeration of sewage in a bottle that had been coated with algae. Fowler's engineering colleagues, Ardern and Lockett, experimented on treating sewage in a draw-and-fill reactor, which produced a highly treated effluent. They aerated the waste-water continuously for about a month and were able to achieve a complete nitrification of the sample material. Believing that the sludge had been activated (in a similar manner to activated carbon) the process was named ''activated sludge''. Not until much later was it realized that what had actually occurred was a means to concentrate biological organisms, decoupling the liquid retention time (ideally, low, for a compact treatment system) from the solids retention time (ideally, fairly high, for an effluent low in BOD5 and ammonia.) Their results were published in their seminal 1914 paper, and the first full-scale continuous-flow system was installed at Worcester two years later. In the aftermath of the First World War the new treatment method spread rapidly, especially to the USA, Denmark, Germany and Canada. By the late 1930s, the activated sludge treatment became a well-known biological wastewater treatment process in those countries where sewer systems and sewage treatment plants were common.

The process takes advantage of aerobic micro-organisms that can digest organic matter in sewage, and clump together (by flocculation) as they do so. It thereby produces a liquid that is relatively free from suspended solids and organic material, and flocculated particles that will readily settle out and can be removed. The general arrangement of an activated sludge process for removing carbonaceous pollution includes the following items: * Aeration tank where air (or oxygen) is injected in the mixed liquor. * Settling tank (usually referred to as "final clarifier" or "secondary settling tank") to allow the biological flocs (the sludge blanket) to settle, thus separating the biological sludge from the clear treated water. Treatment of nitrogenous matter or phosphate involves additional steps where the processes are managed to generate an anoxic zone so that phosphates can be solubilised in the reducing environment and oxides of nitrogen can be reduced to ammonium ion.

The process involves air or oxygen being introduced into a mixture of screened, and primary treated sewage or industrial wastewater (wastewater) combined with organisms to develop a biological floc which reduces the organic content of the sewage. This material, which in healthy sludge is a brown floc, is largely composed of saprotrophic bacteria but also has an important protozoan flora component mainly composed of amoebae, Spirotrichs, Peritrichs including Vorticellids and a range of other filter-feeding species. Other important constituents include motile and sedentary Rotifers. In poorly managed activated sludge, a range of mucilaginous filamentous bacteria can develop - including ''Sphaerotilus natans'', ''Gordonia'', and other microorganisms - which produces a sludge that is difficult to settle and can result in the sludge blanket decanting over the weirs in the settlement tank to severely contaminate the final effluent quality. This material is often described as sewage fungus but true fungal communities are relatively uncommon. The combination of wastewater and biological mass is commonly known as ''mixed liquor''. In all activated sludge plants, once the wastewater has received sufficient treatment, excess mixed liquor is discharged into settling tanks and the treated supernatant is run off to undergo further treatment before discharge. Part of the settled material, the sludge, is returned to the head of the aeration system to re-seed the new wastewater entering the tank. This fraction of the floc is called ''return activated sludge'' (R.A.S.). The space required for a sewage treatment plant can be reduced by using a membrane bioreactor to remove some wastewater from the mixed liquor prior to treatment. This results in a more concentrated waste product that can then be treated using the activated sludge process. Many sewage treatment plants use axial flow pumps to transfer nitrified mixed liquor from the aeration zone to the anoxic zone for denitrification. These pumps are often referred to as internal mixed liquor recycle pumps (IMLR pumps). The raw sewage, the RAS, and the nitrified mixed liquor are mixed by submersible mixers in the anoxic zones in order to achieve denitrification.

The general process control method is to monitor sludge blanket level, SVI (Sludge Volume Index), MCRT (Mean Cell Residence Time), F/M (Food to Microorganism), as well as the biota of the activated sludge and the major nutrients DO (Dissolved oxygen), nitrogen, phosphate, BOD (Biochemical oxygen demand), and COD (Chemical oxygen demand). In the reactor/aerator and clarifier system, the sludge blanket is measured from the bottom of the clarifier to the level of settled solids in the clarifier's water column; this, in large plants, can be done up to three times a day. The SVI is the volume of settled sludge in millilitres occupied by 1g of dry sludge solids after 30 minutes of settling in a 1000 millilitre graduated cylinder. The MCRT is the total mass (lbs) of mixed liquor suspended solids in the aerator and clarifier divided by the mass flow rate (lbs/day) of mixed liquor suspended solids leaving as WAS and final effluent. The F/M is the ratio of food fed to the microorganisms each day to the mass of microorganisms held under aeration. Specifically, it is the amount of BOD fed to the aerator (lbs/day) divided by the amount (lbs) of Mixed Liquor Volatile Suspended Solids (MLVSS) under aeration. Note: Some references use MLSS (Mixed Liquor Suspended Solids) for expedience, but MLVSS is considered more accurate for the measure of microorganisms. Again, due to expedience, COD is generally used, in lieu of BOD, as BOD takes five days for results. Based on these control methods, the amount of settled solids in the mixed liquor can be varied by wasting activated sludge (WAS) or returning activated sludge (RAS). There are a variety of types of activated sludge plants.