Zhongshan (; ) is a prefecture-level city in the south of the Pearl River Delta in Guangdong province, China, with a population of over 3 million (2012). The city-core subdistricts used to be called Shiqi or Shekki (). Zhongshan is one of a very few cities in China named after a person. It is named after Dr. Sun Yat-sen (1866–1925), who is known in Mandarin as ''Sun Zhongshan''. Sun, the founding father of the Republic of China who is also regarded positively by the People's Republic, was born in Cuiheng village in Nanlang Township of what was then Xiangshan County. In 1925, the year after his death, Xiangshan was renamed Zhongshan in his honor.

Until 1925, Zhongshan was generally known as Xiangshan or Heung-san (Siangshan) (), in reference to the many flowers that grew in the mountains nearby. The city was renamed in honor of Dr. Sun Yat-sen, who had adopted the name Zhongshan. Sun is considered by both the People's Republic of China and the Republic of China to be the "Father of Modern China", and was from Cuiheng village – now part of Nanlang Town in Zhongshan.

Thousands of years ago, much of the Zhongshan area lay within the Pearl River estuary, with only scattered islands above the surface. Gradually from south to north, the area filled in with alluvial silt and became dry land. The northern parts of today's Zhongshan did not fill in until the time of the Ming Dynasty. The Zhongshan area was part of an extended Dongguan County during the Tang Dynasty (618–907 AD), and was a significant sea salt producer. In 1082, during the Northern Song Dynasty, a fortified settlement called Xiangshan was founded in the area, marking the first official use of the name by which it would be known throughout most of its modern history. The prosperous settlement was then upgraded to a county in 1152. After the collapse of the Southern Song Dynasty, many descendants of Song court officials, including members of the imperial family, settled in Xiangshan. Under the Qing Dynasty, embankments were built to prevent flooding in the new alluvial lands, and the area of cultivation was extended. Much of the First Opium War took place in and around Xiangshan. In 1839, the official Lin Zexu arrived in Xiangshan and ordered the expulsion of Sir Charles Elliot and other British traders from the area. Qing Dynasty soldiers resisted British attacks on the area in 1840, but were ultimately overwhelmed. After the Opium Wars opened the region to foreign influence, a number of Xiangshan residents, including Sun Zhongshan (Yatsen), left to study overseas and were among the creators of modern China. Xiangshan was one of the first counties in China liberated as part of the Xinhai Revolution. After Sun Zhongshan's death in 1925, the commander-in-chief of the armed forces of the Republic of China decided to memorialize Sun by renaming his county of birth from Xiangshan to Zhongshan. Nationalist and Communist units launched guerrilla attacks on Japanese forces beginning in 1942. On August 15, 1945, Japanese forces declared an unconditional surrender, and Zhongshan was liberated. Zhongshan was the scene of fighting during the Chinese Civil War and was held for much of the war by Nationalists. On October 30, 1949, however, the People's Liberation Army defeated Nationalist forces in Zhongshan, and the county came under the control of the People's Republic of China. In 1983, Zhongshan was elevated in administrative status from a county to a county-level city under the administration of Foshan. In 1988 Zhonshan became a prefecture-level city.

Zhongshan is located along the west side of the mouth of the Pearl River, directly opposite Shenzhen and Hong Kong. It lies south of Guangzhou and Foshan and north of Zhuhai and Macau. The northern part of Zhongshan, including most of the urbanized area, lies on the alluvial plains of the Pearl River Delta, while the southern part of the city's territory reaches into a range of coastal hills. The most notable of these are the Wugui Hills (). The city's current geography is typical of southern China: numerous steep mountains and hills with alluvial plains in between down to the coastline. The main summit of the Wugui Hills is the highest point in the city, at above sea level. Like nearly all of southern China, Zhongshan's climate is warm and humid most of the year, with an average temperature of and of rainfall each year. Southern China experiences fairly frequent typhoons and thunderstorms, and most rain falls between April and September. 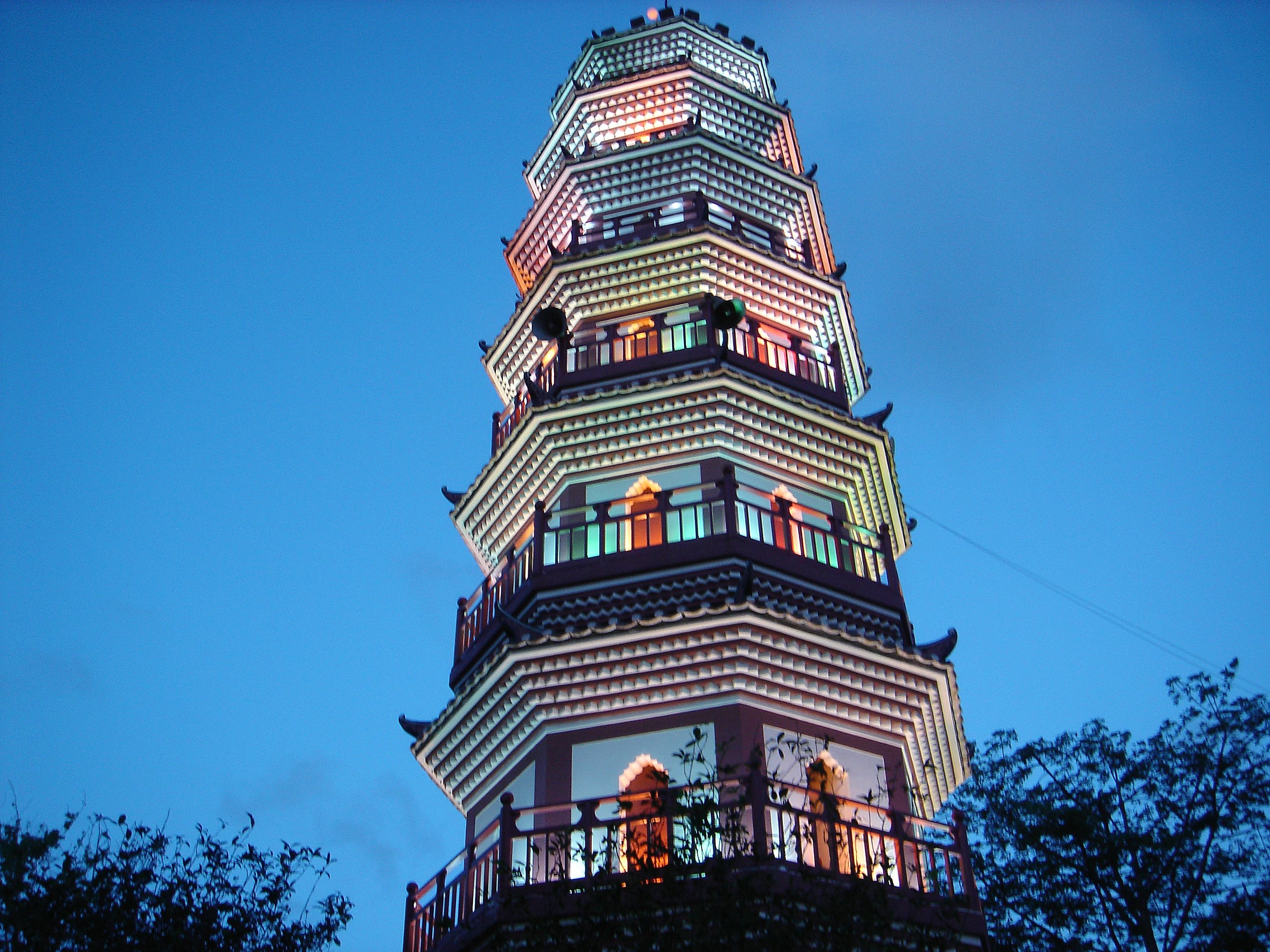 Zhongshan is a city of numerous leafy parks, wide boulevards, and monuments. Notable sights include: * Sunwen Road West (or Sunwen Xilu) in Zhongshan Old Town, a pedestrian mall lined with dozens of restored buildings from the colonial period in treaty port style. Several of these buildings were built in the 1920s. * The seven-story Fufeng Pagoda, built in 1608 and visible from all over the city, is on a hill in Zhongshan Park, which abuts the western end of Sunwen Road West immediately to its north. A Sun Yat-sen memorial pavilion stands near the pagoda. * Sunwen Memorial Park, at the southern end of Xingzhong Road, is the site of the largest bronze sculpture of Sun Yat-sen in the world. Zhongshan, like many cities in China, has a rapidly changing cityscape with many new buildings under construction. Currently, the tallest completed buildings in the city are the two Zhongshan International Finance Center Towers. Tower 1 and Tower 2 both reach a height of 220 meters (722 feet) and are 55 stories tall. These will be eclipsed by the Perfect Eagle Golden Square tower, which will reach 238 meters (781 feet), with an expected completion date in 2018. The International Trade Center in Guzhen Town, expected to be completed in 2019, will reach a height of 305 meters (1,001 feet) with 65 floors.

Zhongshan is a prefecture-level city of the Guangdong province. An uncommon administrative feature is that it has no county-level division, but the municipal government does group the 24 township-level divisions into five district areas. The city government directly administers six Subdistricts and 18 towns: * Cuiheng New Area ()

Although the main ethnic group in Zhongshan is Han Chinese, there is no one dominant language or dialect spoken making Zhongshan one of the most diverse cities in China. Dialects spoken in the city ranging from the more common Yue, Hakka, and Min dialects to the more local Shiqi, Shatian, Longdu, Nanlang, Sanxiang, Guzhen, Sanjiao, and Zhangjiabian dialects as well as Wuiguishan, the only Hakka dialect in the city. The most common language, however, is Cantonese.

Primary productions are agricultural, such as rice, lychee, banana, and sugar cane. Added to this, horticulture in Xiaolan Town is famous throughout southern China for its blooming chrysanthemum and chickens.

Zhongshan, Dongguan, Nanhai, and Shunde are dubbed the 'Four Little Tigers' in Guangdong. The proximity of Zhongshan to Hong Kong and Macau is an advantage to its economic development, especially in manufacturing. In the 1980s, Zhongshan had a relatively developed state-owned enterprise (SOE) sector that was used to stimulate Township and Village Enterprises (TVE) development in the countryside. Currently, the SOE sector is much weaker, and the economy is dominated by foreign investment and TVEs, and by specialized 'manufacturing towns'. Each of these towns specializes in making a particular product. Most of the towns are so successful that they earn a reputation as leading manufacturers in their pillar industries. Indeed, "One Industry in One Town" has become a unique economic feature in Zhongshan. Pillar industries in specialized manufacturing towns in Zhongshan include: * Dachong Town for mahogany furniture * Dongfeng Town for electric household appliances * Guzhen Town for lighting fixtures * Huangpu Town for food processing * Shaxi Town for casual wear manufacturing * Xiaolan Town for locks and hardware, as well as for electronic acoustics products The government of Zhongshan encourages "Research and Design" in the region by setting up national level research centres and specialized industrial regions. For example, the Zhongshan National Torch High-Tech Industrial Development Zone () was established in 1990 in the east of the city by the Ministry of Science and Technology and the governments of Guangdong province and Zhongshan. Zhongshan Port, which ranks among the top 10 ports nationwide in container-handling capacity, is in the zone. Since 2001, it has included the Zhongshan Electronic Base of China () for its reputation in the electronic acoustics industry. Following possible development in Nansha, the city considers its eastern part, of which of land is available, a focus of future development. Currently, the city is trying to re-organize its fragmented industrialization. Meanwhile, the light and labour-intensive industry characteristic of the local economy faces the problem of a shortage of land in Zhongshan.

* Two natural hot spring resorts are located in Sanxiang Town, such as the national own firm Zhongshan Hot Springs Resort, which is ranked top 10 hot spring resorts in China because there is a rare hot spring reservoir in the Pearl River Delta. The World Lamp King Museum, a lamp museum in the form of a giant lamp scheduled to open in 2015, will be a major tourist attraction. * Former Residence of Sun Yat-sen Memorial Museum: The former residence of Sun Zhongshan is at the center of the Memorial Museum, located in the village of Cuiheng. * Xiaolan: Many houses in the town of Xiaolan have garden pavilions dedicated to the cultivation of chrysanthemums. Roofs and balconies, streets and lanes feature countless varieties of chrysanthemum plantings. Zhongshan is home to a number of forest parks which are designed to protect the natural features of the land and offer visitors a chance to get closer to nature. Zhongshan Tianxin Forest Park () was opened in 2015 as part of the city's "green lung" initiative.

Zhongshan Public Transport Group Co., Ltd. operates many bus routes throughout the city. Stop announcements are voiced in Mandarin and Cantonese on all buses. On BRT system buses, announcements are also voiced in English. By purchasing a Zhongshan Tong card from authorized retailers, riders can receive a discount of 50% on all bus rides. Elderly citizens are allowed to ride for free.

Guangzhou–Zhuhai Intercity Railway serves the city of Zhongshan at seven stations. The often discussed Zhongshan metro rail system has a plan for the first two lines to be operational in December 2020.

* The Shenzhen-Zhongshan Bridge will connect Zhongshan with the city of Shenzhen on the Eastern side of the Pearl River Delta. It will consist of a series of bridges and tunnels, starting from Bao'an International Airport on the Shenzhen side. Construction of the proposed eight-lane link is scheduled to start in 2015, with completion scheduled for 2021.