The Veterans Health Administration (VHA) is the component of the United States Department of Veterans Affairs (VA) led by the Under Secretary of Veterans Affairs for Health that implements the healthcare program of the VA through the administration and operation of numerous VA Medical Centers (VAMC), Outpatient Clinics (OPC), Community Based Outpatient Clinics (CBOC), and VA Community Living Centers (VA Nursing Home) Programs. Many evaluations have found that by most measures VHA care is equal to, and sometimes better than, care provided in the private sector, when judged by standard evidence-based guidelines. The VHA is distinct from the U.S. Department of Defense Military Health System of which it is not a part. The VHA division has more employees than all other elements of the VA combined.

The Veterans Health Administration is a form of nationalized healthcare service in the United States that provides healthcare to Veterans. What makes this type of healthcare different from other forms in the United States is that everything is owned by and operated by the Department of Veterans Affairs as opposed to private companies which is what we see in other parts of the health care market. This means that all the medical facilities that are part of the VHA are owned by the US Government and all the doctors and workers at the facilities are paid by the government. What is a more common model in the United States is that consumers have private health insurance and the medical facilities used are all privatized. As of 2017 the Census found that 67.2% of Americans have private health coverage. Since the VHA is nationalized they receive funding from the Department of Veterans Affairs, which is allocated funds by the federal government. Because of this, Veterans that qualify for VHA healthcare do not pay premiums or deductibles for their healthcare, but may have to make copayments depending on what procedure they are having. The funding the VA receives is split into mandatory, which is an amount of spending dictated by law, and discretionary spending, which is spending that can be adjusted year to year. In 2020 the budget given to the VA was $220.2 billion, of which 56% was mandatory spending and 44% was discretionary. From the discretionary funding, 87.6% was allocated to medical programs which came to a total VHA budget of $85 billion. 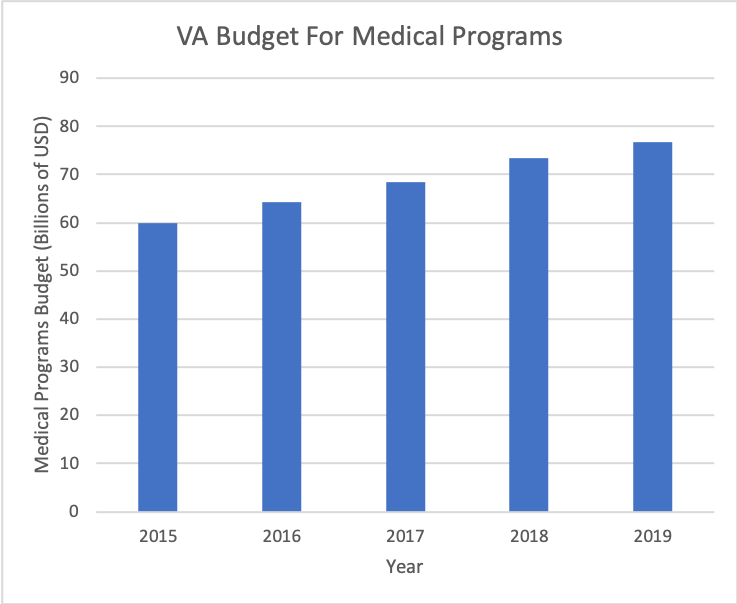 The first Federal agency to provide medical care to veterans was the Naval Home in Philadelphia, Pennsylvania. The home was created in 1812 and was followed by the creation of Soldiers Home in 1853 and St. Elizabeth's Hospital in 1855. Congress created the National Home for Disabled Volunteer Soldiers in 1865 in response to the high number of Civil War casualties. These homes were initially intended to be room and board for disabled veterans. However, by the late 1920s, the homes were providing a level of care comparable to hospital care. President Hoover created the Veterans Administration (VA) in 1930 to consolidate all veteran services. General Omar N. Bradley was appointed to VA administrator and Bradley appointed Major General Paul Hawley as director of VA medicine, both in 1945. Hawley successfully established a policy that affiliated new VA hospitals with medical schools. Hawley also promoted resident and teaching fellowships at VA hospitals. Ultimately, Hawley was responsible for starting the hospital-based research program at the VA. Bradley resigned in 1947. However, upon resignation, 97 hospitals were in operation and 29 new hospitals had been built. As a result, the VA health system was able to serve a much larger population of veterans than it had served in previous years. In 1988, President Reagan signed the Department of Veterans Affairs Act, which elevated the VA to Cabinet-level, then becoming known as the Department of Veterans Affairs. The Department of Veterans Affairs oversees the Veterans Health Administration. In the mid-1980s the VHA was criticized for their high operative mortality. To that end, Congress passed Public Law 99-166 in December 1985 which mandated the VHA to report their outcomes in comparison to national averages and the information must be risk-adjusted to account for the severity of illness of the VHA surgical patient population. In 1991 the National VA Surgical Risk Study (NVASRS) began in 44 Veterans Administration Medical Centers. By December 31, 1993 there was information for 500,000 non-cardiac surgical procedures. In 1994 NVASRS was expanded to all 128 VHA hospitals that performed surgery. The name was then changed to the National Surgical Quality Improvement Program. Beginning in the mid-1990s VHA underwent what the agency characterizes as a major transformation aimed at improving the quality and efficiency of care it provides to its patients. That transformation included eliminating underutilized inpatient beds and facilities, expanding outpatient clinics, and restructuring eligibility rules. A major focus of the transformation was the tracking of a number of performance indicators—including quality-of-care measures—and holding senior managers accountable for improvements in those measures.

In 2014, Congress passed th
Veterans Access, Choice, and Accountability Act.
VA Secretary Robert Wilkie assured veterans that the VA wouldn’t be privatized and that veterans would still be able to get the same quality of care they had been receiving. In May 2014, major problems with scheduling timely access to medical care became public. According to a retired doctor at the center interviewed by CNN, at least 40 veterans died waiting for care at the Phoenix, Arizona Veterans Health Administration facilities. An investigation of delays in treatment throughout the Veterans Health Administration system was conducted by the Veterans Affairs Inspector General, but it only found six deaths during the delay. On May 30, 2014, Secretary of Veterans Affairs Eric Shinseki resigned from office due to the fallout from the scandal. Despite the negative exposure and the subsequent vows by Washington lawmakers to take action, the major problems still exist. On June 24, 2014, Senator Tom Coburn, Republican from Oklahoma, and a medical doctor, released a report called Friendly Fire: Death, Delay, and Dismay at the VA which detailed the actions and misconduct of employees of the Department of Veteran Affairs. The report is based on yearlong investigations conducted by Senator Coburn's office on Veterans Health Administration facilities across the nation. The report details the many veterans who have died waiting for health care as a result of the VA misconduct. Secret waiting lists, poor patient care, the millions of dollars that are intended for health care that has gone unspent every year and reports of bonuses paid out to employees who have lied and covered up statistics are also detailed in the report. However, a VA Inspector General's report issued on August 26, 2014, reported that six, not forty, veterans had died experiencing “clinically significant delays” while on waiting lists to see a VA doctor, and in each of these six cases, “we are unable to conclusively assert that the absence of timely quality care caused the deaths of these veterans.”