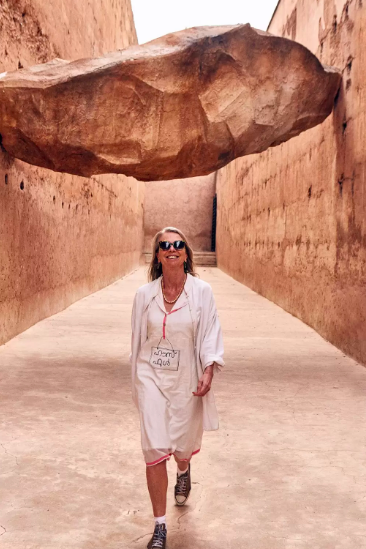 Vanessa Branson (born 1959) is an English entrepreneur, who is the sister of Richard Branson. She is the founder of the Arts in Marrakech (AiM) International Biennale, Marrakech Biennale.

Branson founded the Vanessa Devereux Gallery (1986–91) in Portobello Road, London where she showed a number of emerging artists including William Kentridge’s UK debut exhibition. Along with Prue O’Day and Anatol Orient she initiated the Portobello Arts Festivals in 1987, 1988 and 1989. Between 1999 and 2004 Prue O’Day and Vanessa Branson curated the Wonderful Fund collection which was first shown at the Museum of Marrackech. She owns and runs Eilean Shona, an island on the west coast of Scotland at the entrance to Loch Moidart where J M Barrie wrote the screenplay for Peter Pan. In 2002 she developed the Riad El Fenn hotel in the centre of Marrakech, together with her business partner Howell James. In 2005 she became the President and Founder of the Arts in Marrakech Festival, now known as the Marrakech Biennale.

In October 2014, Vanessa Branson was awarded the Royal distinction of Officer of the Order of Ouissam Alaouite, at the occasion of the ceremony inaugurating the Mohammed V
Museum of Modern and Contemporary Art in Rabat
for her contributions to Moroccan Arts and Culture. She is a trustee of the British Moroccan Society, and The Leila Alaoui Foundation, as well as a trustee for Virgin Unite. She is also on the board of trustees of Global Diversity Foundation. Branson's memoir, ''One Hundred Summers'', was published in May 2020.