which are not contained in any of its 19 organized
boroughs A borough is an administrative division Administrative division, administrative unitArticle 3(1). , country subdivision, administrative region, subnational entity, first-level subdivision, as well as many similar terms, are generic names for ...
. While referred to as the "Unorganized Borough," it is not a borough itself, as it forgoes that level of government structure. It encompasses nearly half of Alaska's land area, , an area larger than any other U.S. state, and larger than the land area of the smallest 16 states combined. As of the 2020 U.S. Census, it had a population of 77,157, which was 10.52% of the population of the state. The largest communities in the Unorganized Borough are the cities of
Bethel Bethel (Ugaritic Ugaritic () is an extinct , classified by some as a of the and so the only known Amorite dialect preserved in writing. It is known through the discovered by French in 1929 at , including several major literary texts, n ...
,
Unalaska Unalaska ( ale, Iluulux̂, russian: Уналашка) is the chief center of population in the Aleutian Islands The Aleutian Islands (; ; ale, Unangam Tanaa, literally "Land of the Aleut The Aleuts (; russian: Алеуты, Aleuty), who a ...
and Valdez.

Unique among the United States, Alaska is not entirely subdivided into organized county equivalents. To facilitate census-taking in the vast unorganized area, the
United States Census Bureau The United States Census Bureau (USCB), officially the Bureau of the Census, is a principal agency of the U.S. Federal Statistical System, responsible for producing data about the American American(s) may refer to: * American, something of, ...
, in cooperation with the state, divided the unorganized borough into 11 census areas, beginning with the 1970
Census A census is the procedure of systematically calculating, acquiring and recording information Information is processed, organised and structured data Data (; ) are individual facts, statistics, or items of information, often numeric. In ...
and undergoing border or name adjustments most recently in 2007, 2008, 2013, 2015, and 2019: This vast area has no local government other than that of
school districts A school is an educational institution An educational institution is a place where people of different ages gain an education Education is the process of facilitating learning, or the acquisition of knowledge, skills, value (eth ...
and
municipalities A municipality is usually a single administrative division Administrative division, administrative unitArticle 3(1). , country subdivision, administrative region, subnational entity, first-level subdivision, as well as many similar terms, ...
within its limits. Many of the villages do have tribal governments, however. Except within some incorporated cities, all government services in the Unorganized Borough, including law enforcement, are provided by the state or by a tribal government. School districts in the Unorganized Borough are operated either by cities, in those limited instances when the city has chosen to undertake those powers, or through the general guidance of the
state Department of Education A state education agency or state department of education is the state-level government organization within each U.S. state or U.S. territory, territory responsible for education, including providing information, resources, and technical assistan ...
under the auspices of Rural Education Attendance Areas.

had forbidden the territory from establishing counties. The delegates of the
convention Convention may refer to: * Convention (norm), a custom or tradition, a standard of presentation or conduct ** Treaty, an agreement in international law * Convention (meeting), meeting of a (usually large) group of individuals and/or companies in a ...
which wrote the
Alaska Constitution The Constitution of the State of Alaska was ratified on April 4, 1956 and took effect with Alaska Alaska (; ale, Alax̂sxax̂; ; ems, Alas'kaaq; Central Alaskan Yup'ik language, Yup'ik: ''Alaskaq''; tli, Anáaski) is a U.S. state in ...
had, in fact, debated the merits of establishing
counties A county is a geographical region of a country used for administrative or other purposesChambers Dictionary, L. Brookes (ed.), 2005, Chambers Harrap Publishers Ltd, Edinburgh in certain modern nations. The term is derived from the Old French ...
, and had rejected the idea in favor of creating a system of boroughs, both organized and unorganized. The intent of the framers of the constitution was to provide for maximum local
self-government __NOTOC__ Self-governance, self-government, or self-rule is the ability of a person or group to exercise all necessary functions of regulation without intervention from an external authority (sociology), authority. It may refer to personal con ...
with a minimum of
local government Local government is a generic term for the lowest tiers of public administration Public administration is the implementation of government policy Public policy is a course of action created and/or enacted, typically by a government ...
units and tax-levying jurisdictions. The minutes of the constitutional convention indicate that counties were not used as a form of local government for various reasons. The failure of some local economies to generate enough revenue to support separate counties was an important issue, as was the desire to use a model that would reflect the unique character of Alaska, provide for maximum local input, and avoid a body of county
case law Case law is the collection of past legal decisions written by courts and similar tribunal A tribunal, generally, is any person or institution with authority to judge, adjudicate on, or determine claims or disputes—whether or not it is calle ...
already in existence. Instead, Alaska adopted boroughs as a form of regional government. This regionalization tried to avoid having a number of independent, limited-purpose governments with confusing boundaries and inefficient governmental operations. The territorial service districts had amounted to this much, but were seen by many as an important foundation for the government to provide services without becoming all-powerful and unnecessarily intrusive, an argument which surfaced time and again during various attempts by the legislature to create organized boroughs out of portions of the unorganized borough. Alaska adopted the borough structure by statute in 1961, and envisioned boroughs to serve as an "all-purpose" form of local government, to avoid the perceived problems of county government in the
lower 48 states The contiguous United States or officially the conterminous United States, also known as the Lower 48, consists of the 48 adjoining U.S. state In the United States The United States of America (U.S.A. or USA), commonly known as ...
as well as
Hawaii Hawaii ( ; haw, Hawaii or ) is a state State may refer to: Arts, entertainment, and media Literature * ''State Magazine'', a monthly magazine published by the U.S. Department of State * The State (newspaper), ''The State'' (newspape ...
. According to Article X of the Alaska Constitution, areas of the state unable to support borough government were to be served by several unorganized boroughs, which were to be mechanisms for the state to regionalize services; however, separate unorganized boroughs were never created. The entire state was defined as one vast unorganized borough by the Borough Act of 1961, and over the ensuing years, Alaska's organized boroughs were carved out of it. Alaska's first organized borough, and the only one incorporated immediately after passage of the 1961 legislation, was the
Bristol Bay Borough Bristol Bay Borough is a borough A borough is an administrative division in various English language, English-speaking countries. In principle, the term ''borough'' designates a self-governing walled town, although in practice, official use of ...
. The pressure from residents of other areas of the state to form boroughs led to the Mandatory Borough Act of 1963, which called for all election districts in the state over a certain minimum population to incorporate as boroughs by January 1, 1964. A resolution of the State of Alaska's Local Boundary Commission introduced in January 2009 spells this out in greater detail: *''WHEREAS, the 1963 Alaska State Legislature passed, and Governor Egan signed into law, the "Mandatory Borough Act" (Chapter 52, SLA 1963), dictating that certain regions of Alaska - those encompassing
Ketchikan Ketchikan ( ; tli, Kichx̱áan) is a City (Alaska), city in and the borough seat of the Ketchikan Gateway Borough of Alaska. It is the state's southeasternmost major settlement. Downtown Ketchikan is a National Historic District. With a popul ...
,
Juneau The City and Borough of Juneau, more commonly known simply as Juneau ( ; tli, Dzánti K'ihéeni ), is the capital city A capital or capital city is the holding primary status in a , , , , or other , usually as its seat of the governmen ...

,
Kenai Peninsula The Kenai Peninsula ( Dena'ina: ''Yaghenen'') is a large peninsula A peninsula ( la, paeninsula from 'almost' and 'island') is a landform A landform is a natural or artificial feature of the solid surface of the Earth or other planetary ...
,
Anchorage Anchorage (officially called the Municipality of Anchorage; Dena'ina: ) is a unified municipal consolidated city-borough in the U.S. state of Alaska Alaska (; ale, Alax̂sxax̂; ; ems, Alas'kaaq; Central Alaskan Yup'ik language, Y ... 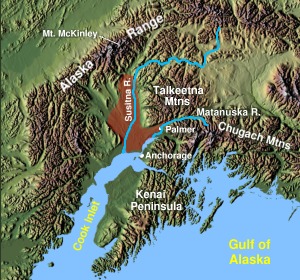 , and
Fairbanks Fairbanks is a home rule Home rule is government of a colony, dependent country, or region by its own citizens. It is thus the power of a part (administrative division Administrative division, administrative unitArticle 3(1). , count ...
- form organized boroughs by January 1, 1964. Furthermore, 21 Rural Education Attendance Areas were established by the Legislature in 1975. This created regional divisions of the unorganized borough for the purpose of establishing rural
school districts A school is an educational institution An educational institution is a place where people of different ages gain an education Education is the process of facilitating learning, or the acquisition of knowledge, skills, value (eth ...
. Many REAAs were later absorbed into organized boroughs.

There are 19 Regional Educational Attendance Areas in the unorganized borough.

A number of boroughs have been incorporated since the Mandatory Borough Act, but most (the primary examples being North Slope, Northwest Arctic, and
Denali Denali (; also known as Mount McKinley, its former official name) is the highest mountain peak in North America, with a summit elevation of above sea level. With a topographic prominence of and a topographic isolation of , Denali is the List ...
) were incorporated to exploit a significant potential source of taxation, such as natural resource extraction and tourism. Many residents of the Unorganized Borough, particularly those in the larger communities which may be most susceptible to organized borough incorporation, have been opposed to such incorporation, and say the status quo suits them just fine. On the other hand, many Alaskans residing in organized boroughs feel that they unfairly subsidize residents of the Unorganized Borough, especially for education. In 2003, the Alaska Division of Community Advocacy identified eight areas within the Unorganized Borough meeting standards for incorporation. Bills have been introduced in the
Alaska Legislature The Alaska Legislature is the state legislature A state legislature is a Legislature, legislative branch or body of a State (country subdivision), political subdivision in a Federalism, federal system. Two federations literally use the term ...
to compel these areas to incorporate, though , none have been signed into law.

*
Unorganized Yukon Unorganized Yukon, or Yukon, Unorganized, is the unorganized area covering the majority of Yukon, Canada. It represents 98% of Yukon's land mass, and is recognized as a census subdivision by Statistics Canada. Demographics In the Canada 2011 Ce ...
, a similar area in the neighboring Canadian territory of
Yukon Yukon ( ; ; formerly called Yukon Territory and sometimes referred to as The Yukon) is the smallest and westernmost of Canada's three territories. It also is the least populated province or territory in Canada, with a population of 35,874 peo ... 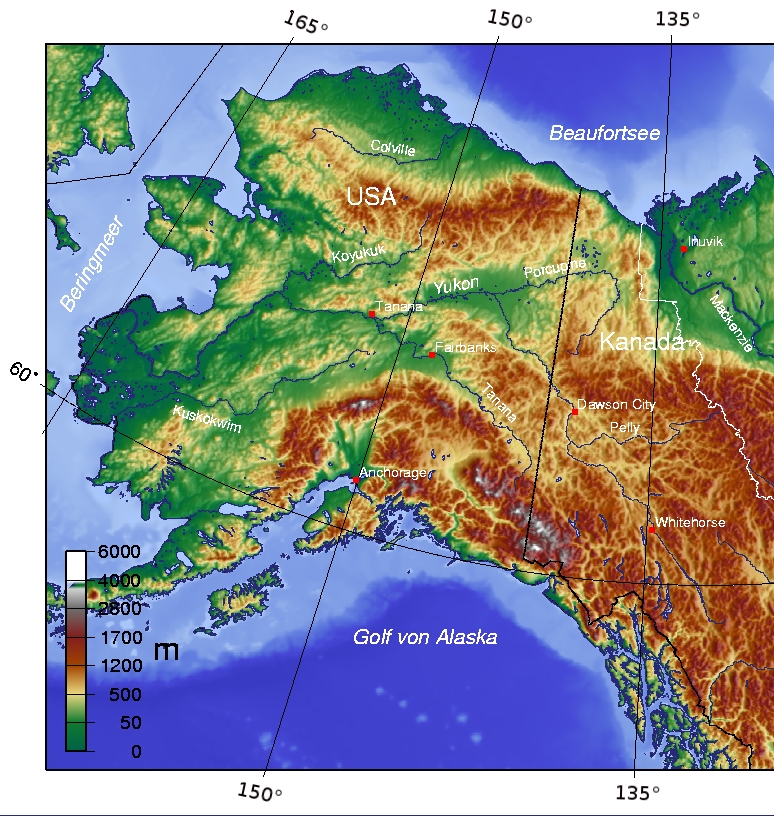