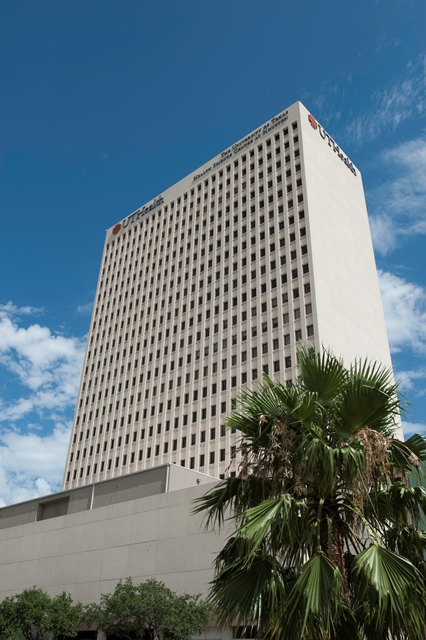 One of the largest medical schools in the United States, John P. and Kathrine G. McGovern Medical School was established by The University of Texas System Board of Regents in 1969 to help shore up the projected state and national shortages of physicians. The school is divided into 23 departments and various specialized research centers. The school's primary teaching hospitals are Memorial Hermann - Texas Medical Center, Children's Memorial Hermann Hospital and Harris Health Lyndon B. Johnson Hospital. The clinical practice of the school is UT Physicians, one of the nation's largest multi-specialty practices. On November 23, 2015, UTHealth announced that the UTHealth Medical School had been renamed the John P. and Kathrine G. McGovern Medical School in honor of a $75 million gift from the John P. McGovern Foundation, the largest gift in the university's history.

In 1962 there was a movement, led by then MD Anderson Hospital President, R. Lee Clark, to establish The University of Texas Graduate School of Biomedical Sciences at Houston. At that time there were 13 predoctoral students studying with scientists at MD Anderson who were enrolled through The University of Texas at Austin. Six MD Anderson scientists were special members, and four students were special associates, in the Graduate School Faculty at Austin. The Graduate School of Biomedical Sciences was established on June 11, 1963, and activated by the Board of Regents of the University of Texas on September 28, 1963. After a two-year national search to recruit an outstanding scientist as dean of the new school, Paul A. Weiss, was chosen. At the time of his appointment he was 66 and had just retired from the Rockefeller Institute. The Rockefeller graduate program, where the curriculum was interdisciplinary, was the prototype for Weiss' plan for the curriculum. This tradition has been integral to the graduate school's mission. Currently, the deans of the graduate school are Michael Blackburn, and Michelle Barton. In 2017, the school was renamed The University of Texas MD Anderson Cancer Center UTHealth Graduate School of Biomedical Sciences.

Established in 1972, Jane and Robert Cizik School of Nursing is ranked in the top five percent of graduate nursing programs in the country and is the highest ranked in Texas. Cizik School of Nursing offers programs resulting in a Bachelor of Science in Nursing, Master of Science in Nursing, Doctor of Philosophy in Nursing, Doctor of Nursing Practice degree or a BSN-DNP in Nurse Anesthesia Program. The school also provides a wide variety of settings in which students and faculty can study, conduct research and participate in clinical practice. The dean ad interim is Diane M. Santa Maria, Dr.P.H., M.S.N., R.N., A.P.H.N.-B.C. The school's Student Community Center opened in 2004. The 195,000-sq.-ft. facility has received several local, state and national architectural design awards to date. In November 2017, Jane and Robert Cizik donated $25 million to UTHealth School of Nursing, giving the school the resources and capacity to shape the future of nursing education and health care delivery. In recognition of the Cizik family, the school was renamed Jane and Robert Cizik School of Nursing at UTHealth.

Following authorization in 1947, the Texas State Legislature first appropriated funds for this school in 1967. The first class was admitted in the fall of 1969, occupying rented and borrowed space. The main campus of the school is located in Houston in the Texas Medical Center. In response to the need for graduate public health education in other geographic areas of the state, UTHealth School of Public Health established regional campuses in San Antonio (1979), El Paso (1992), Dallas (1998), Brownsville (2000) and Austin (2007). Each campus was established to meet the public health education and research needs of its community. The regional campuses have their own resident faculty and on-site course offerings. Interactive video courses originate from and connect all six of the school's campuses. The school has four academic divisions: Biostatistics and Data Science; Epidemiology, Human Genetics and Environmental Sciences; Health Promotion and Behavioral Sciences; and Management, Policy and Community Health; as well as 14 research centers. UTHealth School of Public Health offers graduate education leading to proficiency in the skills needed for public health careers. The main campus in Houston offers four degree programs: M.P.H., Dr.P.H., M.S. and Ph.D. The regional campuses provide masters- and doctoral-level education to individuals in areas geographically distanced from Houston. This allows faculty and students to target public health issues of particular relevance to the communities in which they are located. The school is accredited by the Council on Education for Public Health (CEPH). The dean is Eric Boerwinkle, Ph.D.

The university has three student housing properties, one at 7900 Cambridge (Phase I) and two at 1885 El Paseo (Phase II and III). The student housing on Cambridge, a two-story complex, was built in 1982 and includes the Child Development Center. The Phase II housing on El Paseo, a four-story complex, was built in 2005, and the Phase III complex at the same location was built in 2014. Minor dependent residents of both complexes are zoned to the Houston Independent School District. Residents of both complexes are zoned to Whidby Elementary School, Cullen Middle School, and Lamar High School.

UTHealth several centers and institutes whose work aligns with the university's mission of education, research and clinical care.