Click Here for Items Related To - University of Connecticut


The University of Connecticut (UConn, sometimes stylized as UCONN) is a public land-grant research university in Storrs, Connecticut. It was founded in 1881. The primary 4,400-acre (17.8 km2) campus is in Storrs, Connecticut, approximately a half hour's drive from Hartford and 90 minutes from Boston. It is a flagship university that is ranked as the best public national university in New England and is tied for 23rd in "top public schools" and tied for 63rd best national university in the 2021 ''U.S. News & World Report'' rankings. UConn has been ranked by ''Money Magazine'' and ''Princeton Review'' top 18th in value. The university is classified among "R1: Doctoral Universities – Very high research activity". The university has been recognized as a Public Ivy, defined as a select group of publicly funded universities considered to provide a quality of education comparable to those of the Ivy League. UConn is one of the founding institutions of the Hartford, Connecticut/Springfield, Massachusetts regional economic and cultural partnership alliance known as New England's Knowledge Corridor. UConn was the second U.S. university invited into Universitas 21, an elite international network of 24 research-intensive universities, who work together to foster global citizenship. UConn is accredited by the New England Association of Schools and Colleges. UConn was founded in 1881 as the Storrs Agricultural School, named after two brothers who donated the land for the school. In 1893, the school became a land grant college. In 1939, the name was changed to the University of Connecticut. Over the next decade, social work, nursing and graduate programs were established, while the schools of law and pharmacy were also absorbed into the university. During the 1960s, UConn Health was established for new medical and dental schools. John Dempsey Hospital opened in Farmington in 1975. Competing in the Big East Conference as the Huskies, UConn has been particularly successful in their men's and women's basketball programs. The Huskies have won 21 NCAA championships. The UConn Huskies are the most successful women's basketball program in the nation, having won a record 11 NCAA Division I National Championships (tied with the UCLA Bruins men's basketball team) and a women's record four in a row (2013–2016), plus over 40 conference regular season and tournament championships. UConn also owns the two longest winning streaks of any gender in college basketball history. 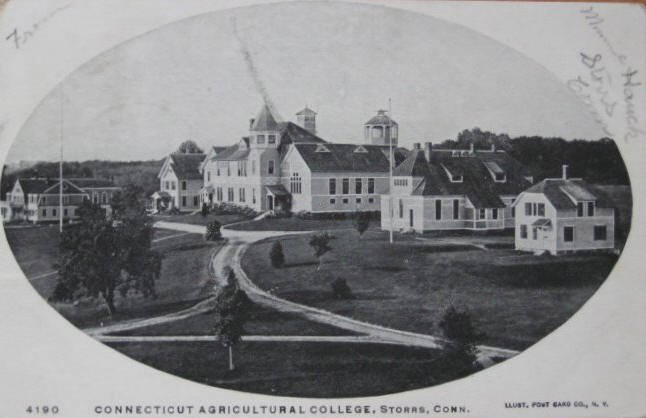 UConn was founded in 1881 as the Storrs Agricultural School. It was named after Charles and Augustus Storrs, brothers who donated the land for the school as well as initial funding. Women began attending classes in 1891 and were officially admitted in 1893, when the name was changed to Storrs Agricultural College and it became Connecticut's land grant college. In 1899, the name changed again to Connecticut Agricultural College; in 1933, to Connecticut State College; and finally, in 1939, to the University of Connecticut. In 1940, the school was first divided into individual colleges and schools, reflecting its new university status. This was also the year the School of Social Work and School of Nursing were established. The graduate program was also started at this time, and the schools of law and pharmacy were absorbed into the university. Ph.D.s have been awarded since 1949. During the 1970s, UConn Health was established in Farmington as a home for the new School of Medicine and School of Dental Medicine. John Dempsey Hospital opened in Farmington in 1975 and has been operated by UConn ever since. In 1995, a state-funded program called UConn 2000 was passed by the Connecticut General Assembly and signed into law by then-Governor John G. Rowland. This 10-year program set aside $1 billion to upgrade campus facilities, add faculty, and otherwise improve the university.