Intelligence is information that agencies collect, analyze, and distribute in response to government leaders' questions and requirements. Intelligence is a broad term that may entail for example:

"Collection, analysis, and production of sensitive information to support national security leaders, including policymakers, military commanders, and members of Congress. Safeguarding these processes and this information through counterintelligence activities. Execution of covert operations approved by the president. The IC strives to provide valuable insight on important issues by gathering raw intelligence, analyzing that data in context, and producing timely and relevant products for customers at all levels of national security—from the war-fighter on the ground to the president in Washington."

Executive Order 12333 charged the IC with six primary objectives: * Collection of information needed by the president, the National Security Council, the secretary of state, the secretary of defense, and other executive branch officials for the performance of their duties and responsibilities; * Production and dissemination of intelligence; * Collection of information concerning, and the conduct of activities to protect against, intelligence activities directed against the U.S., international terrorist and/or narcotics activities, and other hostile activities directed against the U.S. by foreign powers, organizations, persons and their agents; * Special activities (defined as activities conducted in support of U.S. foreign policy objectives abroad which are planned and executed so that the "role of the United States Government is not apparent or acknowledged publicly", and functions in support of such activities, but which are not intended to influence United States political processes, public opinion, policies, or media and do not include diplomatic activities or the collection and production of intelligence or related support functions); * Administrative and support activities within the United States and abroad necessary for the performance of authorized activities and * Such other intelligence activities as the president may direct from time to time. 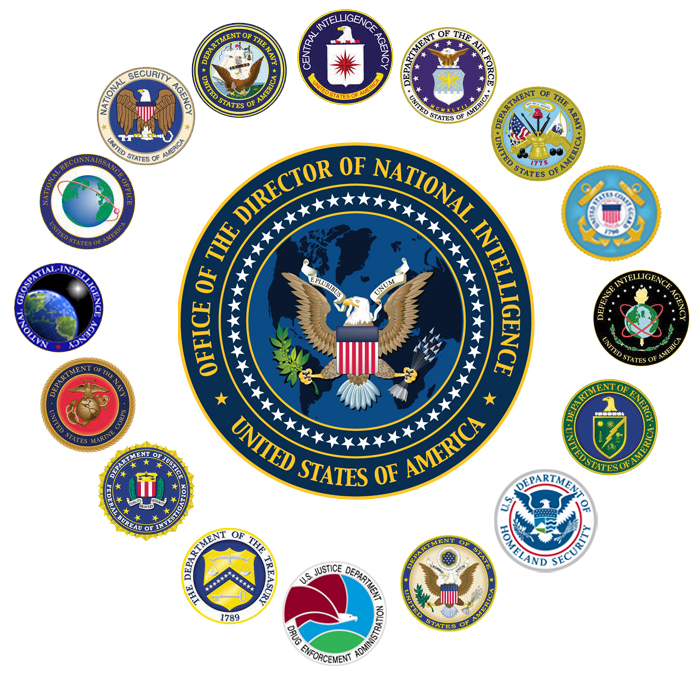 The overall organization of the IC is primarily governed by the National Security Act of 1947 (as amended) and . The statutory organizational relationships were substantially revised with the 2004 Intelligence Reform and Terrorism Prevention Act (IRTPA) amendments to the 1947 National Security Act. Though the IC characterizes itself as a federation of its member elements, its overall structure is better characterized as a confederation due to its lack of a well-defined, unified leadership and governance structure. Prior to 2004, the director of Central Intelligence (DCI) was the head of the IC, in addition to being the director of the CIA. A major criticism of this arrangement was that the DCI had little or no actual authority over the budgetary authorities of the other IC agencies and therefore had limited influence over their operations. Following the passage of IRTPA in 2004, the head of the IC is the director of national intelligence (DNI). The DNI exerts leadership of the IC primarily through statutory authorities under which he or she: * develops and executes the National Intelligence Program budget; * establishes objectives, priorities, and guidance for the IC; and * manages and directs the tasking of, collection, analysis, production, and dissemination of national intelligence by elements of the IC. Despite these responsibilities, the DNI has no authority to direct and control any element of the IC except his own staff—the Office of the DNI—nor does the DNI have the authority to hire or fire personnel in the IC except those on his or her own staff. The member elements in the executive branch are directed and controlled by their respective department heads, all cabinet-level officials reporting to the president. By law, only the director of the Central Intelligence Agency reports to the DNI. In light of major intelligence failures in recent years that called into question how well Intelligence Community ensures U.S. national security, particularly those identified by the 9/11 Commission (National Commission on Terrorist Attacks Upon the United States), and the "WMD Commission" (Commission on the Intelligence Capabilities of the United States Regarding Weapons of Mass Destruction), the authorities and powers of the DNI and the overall organizational structure of the IC have become subject of intense debate in the United States.

Previously, interagency cooperation and the flow of information among the member agencies was hindered by policies that sought to limit the pooling of information out of privacy and security concerns. Attempts to modernize and facilitate interagency cooperation within the IC include technological, structural, procedural, and cultural dimensions. Examples include the Intellipedia wiki of encyclopedic security-related information; the creation of the Office of the Director of National Intelligence, National Intelligence Centers, Program Manager Information Sharing Environment, and Information Sharing Council; legal and policy frameworks set by the Intelligence Reform and Terrorism Prevention Act of 2004, information sharing Executive Order 13354 and Executive Order 13388, and the 2005 National Intelligence Strategy.

The U.S. intelligence budget (excluding the Military Intelligence Program) in fiscal year 2013 was appropriated as $52.7 billion, and reduced by the amount sequestered to $49.0 billion. In fiscal year 2012 it peaked at $53.9 billion, according to a disclosure required under a recent law implementing recommendations of the 9/11 Commission. The 2012 figure was up from $53.1 billion in 2010, $49.8 billion in 2009, $47.5 billion in 2008, $43.5 billion in 2007, and $40.9 billion in 2006. About 70 percent of the intelligence budget went to contractors for the procurement of technology and services (including analysis), according to the May 2007 chart from the ODNI. Intelligence spending has increased by a third over ten years ago, in inflation-adjusted dollars, according to the Center for Strategic and Budgetary Assessments. In a statement on the release of new declassified figures, DNI Mike McConnell said there would be no additional disclosures of classified budget information beyond the overall spending figure because "such disclosures could harm national security". How the money is divided among the 16 intelligence agencies and what it is spent on is classified. It includes salaries for about 100,000 people, multibillion-dollar satellite programs, aircraft, weapons, electronic sensors, intelligence analysis, spies, computers, and software. On August 29, 2013 ''The Washington Post'' published the summary of the Office of the Director of National Intelligence's multivolume FY 2013 Congressional Budget Justification, the U.S. Intelligence Community's top-secret "black budget". The IC's FY 2013 budget details how the 16 spy agencies use the money and how it performs against the goals set by the president and Congress. Experts said that access to such details about U.S. spy programs is without precedent. Steven Aftergood of the Federation of American Scientists, which provides analyses of national security issues, stated that "It was a titanic struggle just to get the top-line budget number disclosed, and that has only been done consistently since 2007 ... but a real grasp of the structure and operations of the intelligence bureaucracy has been totally beyond public reach. This kind of material, even on a historical basis, has simply not been available." Access to budget details will enable an informed public debate on intelligence spending for the first time, said the co-chair of the 9/11 Commission Lee H. Hamilton. He added that Americans should not be excluded from the budget process because the intelligence community has a profound impact on the life of ordinary Americans.

Intelligence Community Oversight duties are distributed to both the executive and legislative branches. Primary executive oversight is performed by the President's Foreign Intelligence Advisory Board, the Joint Intelligence Community Council, the Office of the Inspector General, and the Office of Management and Budget. Primary congressional oversight jurisdiction over the IC is assigned to two committees: the United States House Permanent Select Committee on Intelligence and the United States Senate Select Committee on Intelligence. The House Armed Services Committee and Senate Armed Services Committee draft bills to annually authorize the budgets of DoD intelligence activities, and both the House and Senate appropriations committees annually draft bills to appropriate the budgets of the IC. The Senate Committee on Homeland Security and Governmental Affairs took a leading role in formulating the intelligence reform legislation in the 108th Congress.