The United States Department of Homeland Security (DHS) is the U.S. federal executive department responsible for public security, roughly comparable to the interior or home ministries of other countries. Its stated missions involve anti-terrorism, border security, immigration and customs, cyber security, and disaster prevention and management. It began operations in 2003, formed as a result of the Homeland Security Act, enacted the previous year in response to the 9/11 attacks. With more than 240,000 employees, DHS is the third-largest Cabinet department, after the Departments of Defense and Veterans Affairs. Homeland security policy is coordinated at the White House by the Homeland Security Council. Other agencies with significant homeland security responsibilities include the Departments of Health and Human Services, Justice, and Energy.

In response to the September 11 attacks, President George W. Bush announced the establishment of the Office of Homeland Security (OHS) to coordinate "homeland security" efforts. The office was headed by former Pennsylvania Governor Tom Ridge, who assumed the title of assistant to the president for homeland security. The official announcement states: Ridge began his duties as OHS director on October 8, 2001. On November 25, 2002, the Homeland Security Act established the Department of Homeland Security to consolidate U.S. executive branch organizations related to "homeland security" into a single Cabinet agency. The Gilmore Commission, supported by much of Congress and John Bolton, helped further solidify need for the department. The DHS incorporated the following 22 agencies.

According to border theorist Peter Andreas, the creation of DHS constituted the most significant government reorganization since the Cold War and the most substantial reorganization of federal agencies since the National Security Act of 1947 (which had placed the different military departments under a secretary of defense and created the National Security Council and Central Intelligence Agency). DHS constitutes the most diverse merger of federal functions and responsibilities, incorporating 22 government agencies into a single organization. The founding of the DHS marked a change in American thought towards threats. Introducing the term "homeland" centers attention on a population that needs to be protected not only against emergencies such as natural disasters but also against diffuse threats from individuals who are non-native to the United States. Prior to the signing of the bill, controversy about its adoption was focused on whether the Federal Bureau of Investigation and the Central Intelligence Agency should be incorporated in part or in whole (neither were included). The bill was also controversial for the presence of unrelated "riders", as well as for eliminating certain union-friendly civil service and labor protections for department employees. Without these protections, employees could be expeditiously reassigned or dismissed on grounds of security, incompetence or insubordination, and DHS would not be required to notify their union representatives. The plan stripped 180,000 government employees of their union rights. In 2002, Bush officials argued that the September 11 attacks made the proposed elimination of employee protections imperative.

Congress ultimately passed the Homeland Security Act of 2002, and President Bush signed the bill into law on November 25, 2002. It was the largest U.S. government reorganization in the 50 years since the United States Department of Defense was created. Tom Ridge was named secretary on January 24, 2003, and began naming his chief deputies. DHS officially began operations on January 24, 2003, but most of the department's component agencies were not transferred into the new department until March 1. 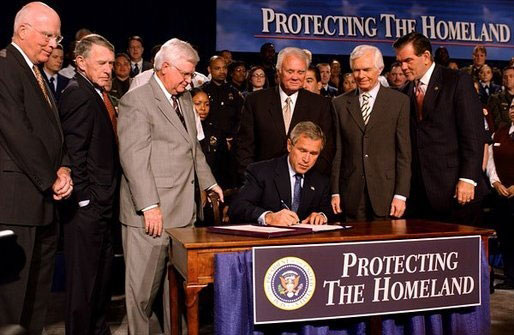 After establishing the basic structure of DHS and working to integrate its components, Ridge announced his resignation on November 30, 2004, following the re-election of President Bush. Bush initially nominated former New York City Police Department commissioner Bernard Kerik as his successor, but on December 10, Kerik withdrew his nomination, citing personal reasons and saying it "would not be in the best interests" of the country for him to pursue the post.

On January 11, 2005, President Bush nominated federal judge Michael Chertoff to succeed Ridge. Chertoff was confirmed on February 15, 2005, by a vote of 98–0 in the U.S. Senate and was sworn in the same day. In February 2005, DHS and the Office of Personnel Management issued rules relating to employee pay and discipline for a new personnel system named MaxHR. ''The Washington Post'' said that the rules would allow DHS "to override any provision in a union contract by issuing a department-wide directive" and would make it "difficult, if not impossible, for unions to negotiate over arrangements for staffing, deployments, technology and other workplace matters".