The Turkish lira ( tr, Türk lirası; sign: ₺;
code In communication Communication (from Latin ''communicare'', meaning "to share") is the act of developing Semantics, meaning among Subject (philosophy), entities or Organization, groups through the use of sufficiently mutually understood sign ...
: TRY; usually abbreviated as TL) is the
currency A currency, "in circulation", from la, currens, -entis, literally meaning "running" or "traversing" in the most specific sense is money Image:National-Debt-Gillray.jpeg, In a 1786 James Gillray caricature, the plentiful money bags handed t ...
of
Turkey Turkey ( tr, Türkiye ), officially the Republic of Turkey, is a country straddling Southeastern Europe and Western Asia. It shares borders with Greece Greece ( el, Ελλάδα, , ), officially the Hellenic Republic, is a country lo ...

and Turkish Republic of Northern Cyprus. One Turkish lira is subdivided into one hundred '' kuruş''.

The lira, along with the related currencies of Europe and the Middle East, has its roots in the
ancient Roman In historiography Historiography is the study of the methods of historians in developing history as an academic discipline, and by extension is any body of historical work on a particular subject. The historiography of a specific topic c ...
unit of weight known as the libra which referred to the Troy pound of silver. The Roman libra adoption of the currency spread it throughout Europe and the Near East, where it continued to be used into medieval times. The Turkish lira, the French livre (until 1794), the Italian lira (until 2002), and the British pound (a translated version of the Roman ''libra''; the word "pound" as a unit of weight is still abbreviated as "lb.") are the modern descendants of the ancient currency. The Ottoman lira was introduced as the main unit of currency in 1844, with the former currency, kuruş, remaining as a subdivision. The Ottoman lira remained in circulation until the end of 1927. 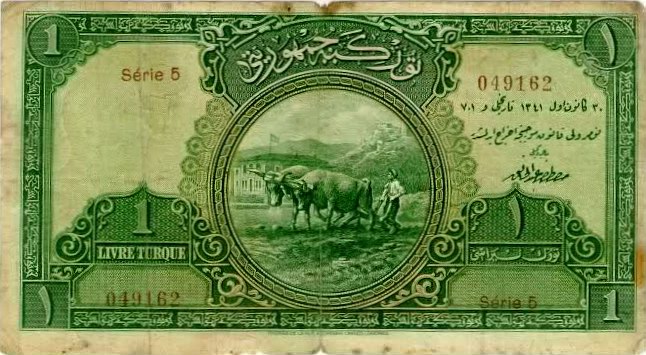 In December 2003, the Grand National Assembly of Turkey passed a law that allowed for redenomination by the removal of six zeros from the Turkish lira, and the creation of a new currency. It was introduced on 1 January 2005, replacing the previous Turkish lira (which remained valid in circulation until the end of 2005) at a rate of 1 second Turkish lira (ISO 4217 code "TRY") = million, 1,000,000 first Turkish lira (ISO 4217 code "TRL"). With the revaluation of the Turkish lira, the Romanian leu (also revalued in July 2005) briefly became the world's least valued currency unit. At the same time, the Government introduced two new banknotes with the denominations of 50 and 100. In the transition period between January 2005 and December 2008, the second Turkish lira was officially called ''Yeni Türk lirası'' ("New Turkish lira"). The letter "Y" in the currency code was taken from the Turkish word ''yeni'', meaning ''new''. It was officially abbreviated "YTL" and subdivided into 100 new ''kuruş'' (''yeni kuruş''). Starting in January 2009, the "new" marking was removed from the second Turkish lira, its official name becoming just "Turkish lira" again, abbreviated "TL". All obverse sides of Turkish lira#Banknotes, current banknotes have portraits of Mustafa Kemal Atatürk. Until 2016, the same held for the reverse sides of all Turkish lira#Coins, current coins, but in 2016 one-lira coins were issued to commemorate the "martyrs and veterans" of the 2016 Turkish coup d'état attempt, the reverse sides of some of which depict hands holding up a Turkish flag while others show in stylized form a collection of five-pointed stars topped by a Turkish flag.

A new series of banknotes, the "E-9 Emission Group" entered circulation on 1 January 2009, with the E-8 group ceasing to be valid after 31 December 2009 (although still redeemable at branches of the Central Bank until 31 December 2019). The E-9 banknotes refer to the currency as "Turkish lira" rather than "new Turkish lira" and include a new 200-Turkish-lira denomination. The new banknotes have different sizes to prevent forgery. The main specificity of this new series is that each denomination depicts a famous Turkish personality, rather than geographical sites and architectural features of Turkey. The dominant color of the 5-Turkish-lira banknote has been determined as "purple" on the second series of the current banknotes.

In 2018, the lira's exchange rate accelerated deterioration, reaching a level of US$4.5/TRY by mid-May and of 4.9 a week later. Among economists, the accelerating loss of value was generally attributed to Recep Tayyip Erdoğan preventing the Central Bank of the Republic of Turkey from making the necessary interest rate adjustments. Erdoğan, who claimed interest rates beyond his control to be "the mother and father of all evil", said that "the central bank can't take this independence and set aside the signals given by the president." Despite Erdogan's apparent opposition, Turkey's Central Bank raised interest rates sharply. In the campaign for the 2018 Turkish general election, 2018 general election in Turkey, a Conspiracy theories in Turkey, widespread conspiracy theory claimed that the Turkish lira's decline were the work of a shadowy group, made up of Americans, English, Dutch and "some Jewish families" who would want to deprive incumbent President Erdogan of support in the elections. According to a poll from April 2018, 42 percent of Turks and 59 percent of governing Justice and Development Party (Turkey), AK Party voters saw the decline in the lira as a plot by foreign powers. List of Ministers of Foreign Affairs (Turkey), Turkish foreign minister Mevlüt Çavuşoğlu claimed Trump's wish to let the current US-Turkish tensions to drag on to the 2018 United States elections, November 2018 US elections so to appeal to his Christian base and gain some points for his party. As of 2020, the Turkish lira continued to plummet in value, with the currency going through a process of devaluation, consistently reaching all time lows. The Turkish Lira deflated by over 400% compared to the US dollar and the euro since 2008, largely due to Erdogan's expansionism, expansionist foreign policy. Erdoğan has tried to fix the current finical crisis with unorthodox methods of banking. The Turkish lira recovered partially throughout early 2021 with the government's rise of interest rates, until the currency began crashing though rapid stages of inflation and Currency appreciation and depreciation, depreciation on March 21, 2021, after the sacking of Central Bank chief Naci Ağbal.

The current currency sign of Turkish lira was created by the Central Bank of the Republic of Turkey in 2012. The new sign was selected after a country-wide contest. The new symbol, created by ''Tülay Lale'', is composed of the letter 'L' shaped like a half anchor, and embedded double-striped letter 'T' angled at 20 degrees. The design created by Tülay Lale was endorsed after a country-wide competition. It was chosen as the winner from a shortlist of seven submissions to the board of the Central Bank, selected from a total of 8,362 entries. The symbol resembles the first letter of the Turkish monetary unit L in the form of a half anchor with double stroke. Prime Minister Recep Tayyip Erdoğan announced the new symbol on 1 March 2012. At its unveiling, Erdoğan explained the design as "the anchor shape hopes to convey that the currency is a 'safe harbor' while the upward-facing lines represent its rising prestige". Faik Öztrak, vice chairman of the main opposition party Republican People's Party (Turkey), CHP, alleged that the new sign resembles the initials 'TE' of then-prime minister Tayyip Erdoğan in a reference to the tughra of Ottoman Empire, Ottoman sultans. The new Turkish lira sign was also criticized for allegedly showing a similarity with an upside-down Armenian dram sign. In May 2012, the Unicode Technical Committee accepted the encoding of a new character for the currency sign, which was included in Unicode 6.2 released in September 2012. On Microsoft Windows operating systems, when using QWERTY#Turkish, Turkish-Q or Keyboard layout#Turkish (F-keyboard), Turkish-F keyboard layouts, it can be typed with the combination .