A trust or corporate trust is a large grouping of business interests with significant market power, which may be embodied as a corporation or as a group of corporations that cooperate with one another in various ways. These ways can include constituting a trade association, owning stock in one another, constituting a corporate group (sometimes specifically a conglomerate), or combinations thereof. The term ''trust'' is often used in a historical sense to refer to monopolies or near-monopolies in the United States during the Second Industrial Revolution in the 19th century and early 20th century. In the broader sense of the term, relating to trust law, a trust is a centuries-old legal arrangement whereby one party conveys legal possession and title of certain property to a second party, called a trustee. While that trustee has ownership, s/he cannot use the property for herself, but holds it 'in trust' for the well-being of a beneficiary. Trusts are commonly used to hold inheritances for the benefit of children and other family members, for example. In business, such trusts, with corporate entities as the trustees, have sometimes been used to combine several large businesses in order to exert complete control over a market, which is how the narrower sense of the term grew out of the broader sense.

The OED dates use of the word "trust" in a financial sense from 1825. Corporate trusts came into use as legal devices to consolidate power in large American corporate enterprises. In January 1882, Samuel C. T. Dodd, Standard Oil's General Solicitor, conceived of the corporate trust to help John D. Rockefeller consolidate his control over the many acquisitions of Standard Oil, which was already the largest corporation in the world. The Standard Oil Trust formed pursuant to a "trust agreement" in which the individual shareholders of many separate corporations agreed to convey their shares to the trust; it ended up entirely owning 14 corporations and also exercised majority control over 26 others. Nine individuals held trust certificates and acted as the trust's board of trustees. One of those trustees, Rockefeller himself, held 41% of the trust certificates; the next most powerful trustee held only about 12%. This kind of arrangement became popular and soon had many imitators. An 1888 article explained the difference between trusts in the traditional sense and the newfangled corporate trusts: Although such "corporate trusts" were initially set up to improve the organization of large businesses, they soon faced widespread accusations of abusing their market power to engage in anticompetitive business practices. This caused the term "trust" to become strongly associated with such practices among the American public and led to the enactment in 1890 of the Sherman Antitrust Act, the first U.S. federal competition statute. 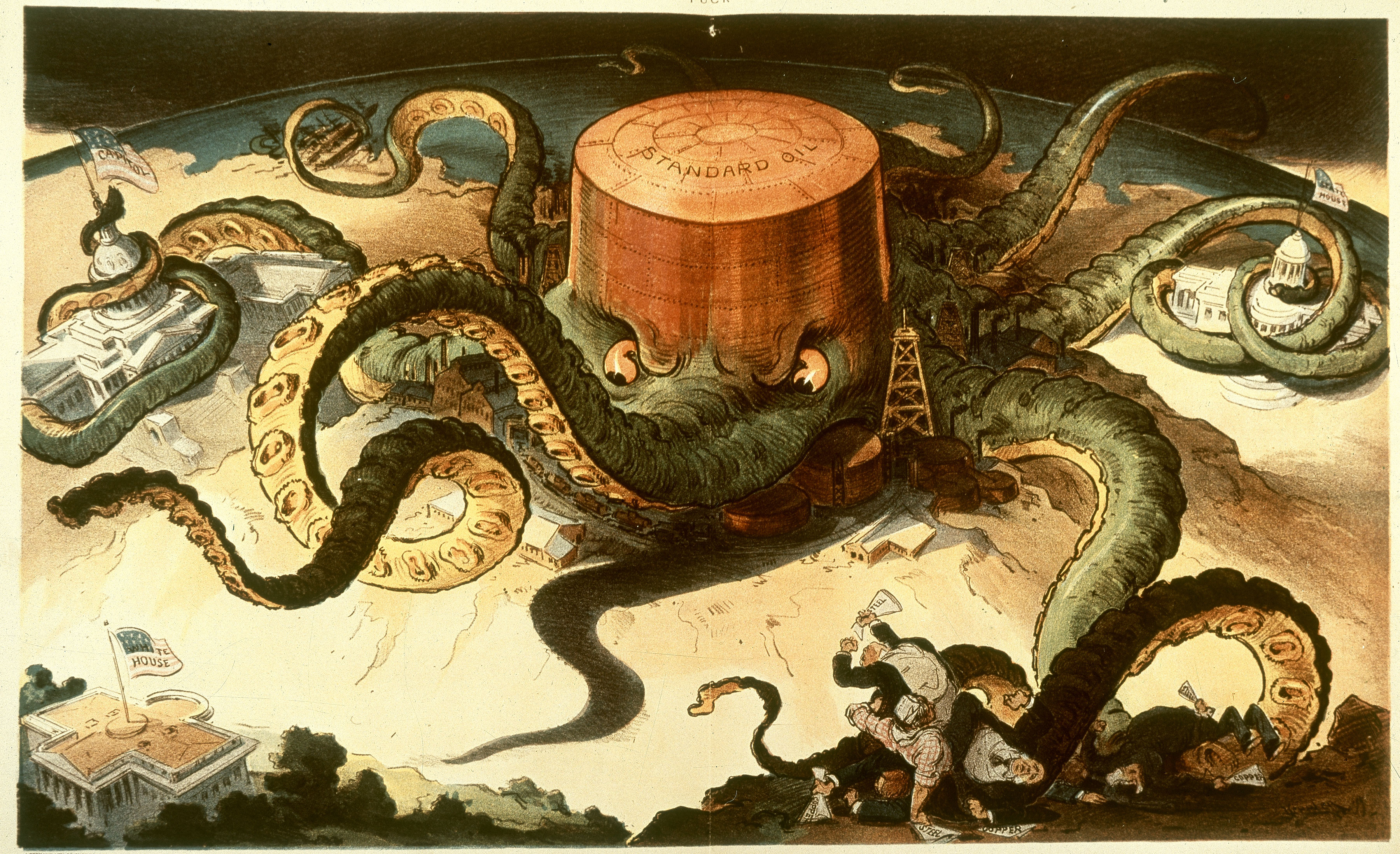 Meanwhile, "trust agreements", the legal instruments used to create the corporate trusts, received a hostile reception in state courts during the 1880s and were quickly phased out in the 1890s in favor of other clever devices like holding companies for maintaining corporate control. For example, the Standard Oil Trust terminated its own trust agreement in March 1892. Regardless, the name stuck, and American competition laws are known today as antitrust laws as a result of the historical public aversion to trusts, while other countries use the term "competition laws" instead. In 1898 President William McKinley launched the "trust-busting" era when he appointed the U.S. Industrial Commission. Theodore Roosevelt seized upon the commission's report and based much of his presidency (1901–1909) on "trust-busting". Prominent trusts included: * Standard Oil * U.S. Steel * the American Tobacco Company * the International Mercantile Marine Company * the match companies controlled by Ivar Kreuger, the ''Match King'' De Beers had a dominant role in the supply of diamonds. Other companies also formed trusts, such as the Motion Picture Patents Company or ''Edison Trust'' which controlled the movie patents. Patents were also important to the Bell Telephone Company, as indicated by the massive litigation that came to be known as The Telephone Cases.