The Tortricidae are a
family In human society A society is a Social group, group of individuals involved in persistent Social relation, social interaction, or a large social group sharing the same spatial or social territory, typically subject to the same Politic ...
of
moth Moths are a paraphyletic In taxonomy, a group is paraphyletic if it consists of the group's last common ancestor and all descendants of that ancestor excluding a few—typically only one or two—Monophyly, monophyletic subgroups. The g ...

s, commonly known as tortrix moths or leafroller moths, in the order
Lepidoptera Lepidoptera ( ; ) is an order Order or ORDER or Orders may refer to: * Orderliness Orderliness is associated with other qualities such as cleanliness Cleanliness is both the abstract state of being clean and free from germs, dirt, trash, or ...

. This large family has over 11,000 species described, and is the sole member of the
superfamily SUPERFAMILY is a database and search platform of structural and functional annotation for all proteins and genomes. It classifies Peptide sequence, amino acid sequences into known Protein domain, structural domains, especially into Structural Clas ...
Tortricoidea, although the genus '' Heliocosma'' is sometimes placed within this superfamily. Many of these are economically important pests. Olethreutidae is a
junior synonym The Botanical and Zoological Codes of nomenclature treat the concept of synonymy differently. In botanical nomenclature Botanical nomenclature is the formal, scientific naming of plants. It is related to, but distinct from taxonomy Taxonomy ...
. The typical resting posture is with the wings folded back, producing a rather rounded profile. Notable tortricids include the
codling moth The codling moth (''Cydia pomonella'') is a member of the Lepidoptera Lepidoptera ( ; ) is an order (biology), order of insects that includes butterfly, butterflies and moths (both are called lepidopterans). About 180,000 species of the Lep ...
and the
spruce budworm ''Choristoneura'' is a genus of moths in the family Tortricidae The Tortricidae are a family (biology), family of moths, commonly known as tortrix moths or leafroller moths, in the order Lepidoptera. This large family has over 11,000 species ...
, which are among the most well-studied of all insects because of their economic impact.

Tortricid moths are generally small, with a wingspan of 3 cm or less. Many species are drab and have mottled and marbled brown colors, but some diurnal species are brightly colored and mimic other moths of the families
Geometridae The geometer moths are moths belonging to the family In human society A society is a Social group, group of individuals involved in persistent Social relation, social interaction, or a large social group sharing the same spatial o ...

and
Pyralidae The Pyralidae, commonly called pyralid moths, snout moths or grass moths, are a family In , family (from la, familia) is a of people related either by (by recognized birth) or (by marriage or other relationship). The purpose of famili ...

Tortricid eggs are often flattened and scale-like. Larvae in the subfamilies Chlidanotinae and Olethreutinae usually feed by boring into stems, roots, buds, or seeds. Larvae in the subfamily Tortricinae, however, feed externally and construct leaf rolls. Larvae in the subfamily Tortricinae tend to be more
polyphagous Feeding is the process by which organisms, typically animals, obtain food. Terminology often uses either the suffixes -vore, -vory, or -vorous from Latin ''vorare'', meaning "to devour", or -phage, -phagy, or -phagous from Greek φαγε ...
than those in Chlidanotinae and Olethreutinae. Tortricinae also possess an anal fork for flicking excrement away from their shelters. 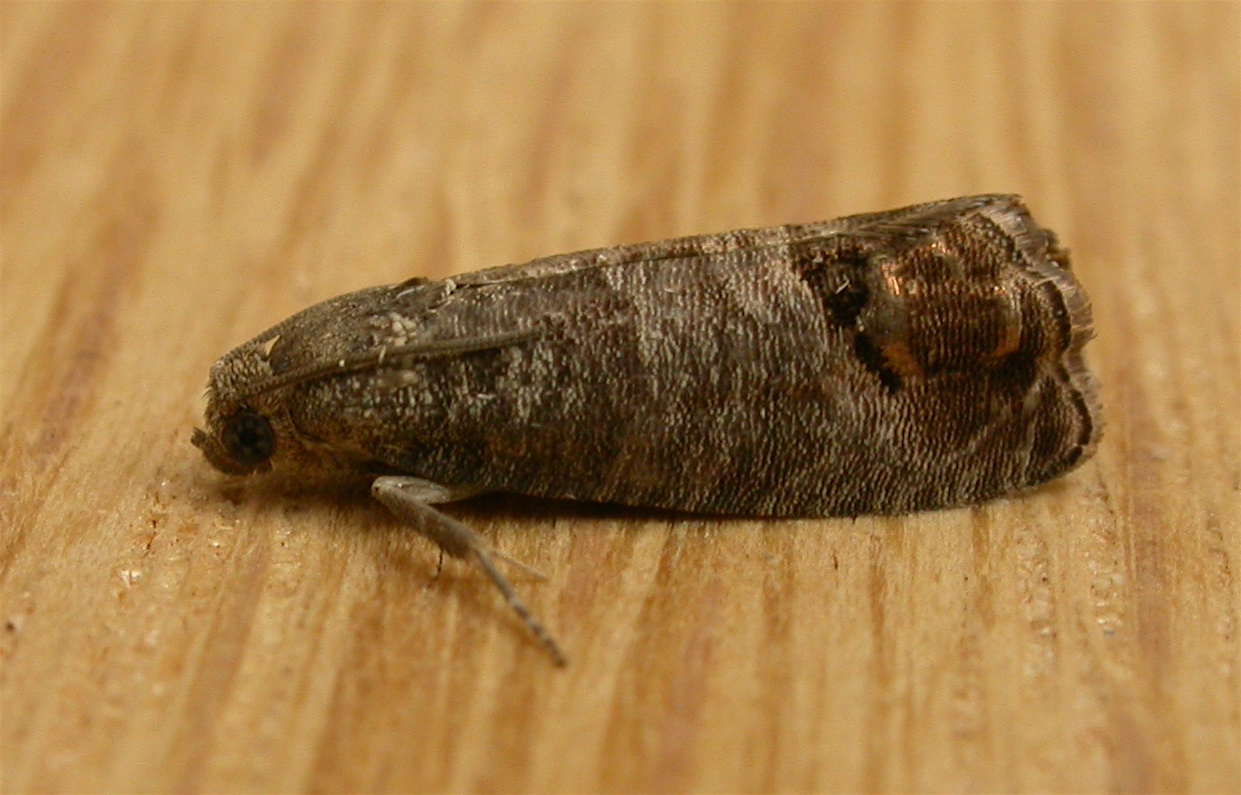 A typical tortricid – the codling moth

The Tortricidae are considered to be the single most important family of insects that feed on apples, both economically and in diversity of feeding found on fruit, buds, leaves, and shoots. In New York, no fewer than seventeen species of Tortricidae have gained pest status in regards to apple production. The
codling moth The codling moth (''Cydia pomonella'') is a member of the Lepidoptera Lepidoptera ( ; ) is an order (biology), order of insects that includes butterfly, butterflies and moths (both are called lepidopterans). About 180,000 species of the Lep ...
''Cydia pomonella'' causes worm-holes in apples. It has been accidentally spread from its original range in Europe and is now found in North and South America, South Africa, Australia, and New Zealand, wherever apples are grown. Control has required the use of the harshest available insecticides – historically lead arsenate and DDT were used for control. These chemicals brought considerable environmental dangers, and in any case the insect gradually developed resistance to them. Currently, organophosphate sprays are favored and are timed carefully to catch the hatching larvae before they can bore into the fruit.

* ''Firefly Encyclopedia of Insects and Spiders'', edited by Christopher O'Toole, , 2002