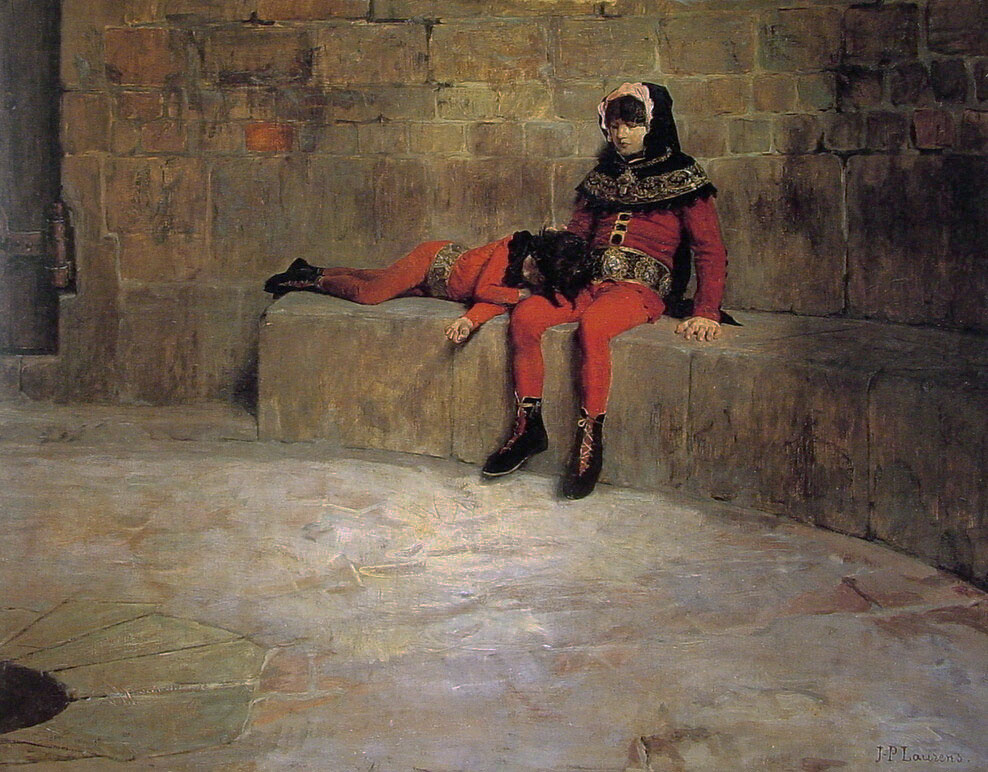 Thriller is a genre of fiction, having numerous, often overlapping subgenres. Thrillers are characterized and defined by the moods they elicit, giving viewers heightened feelings of suspense, excitement, surprise, anticipation and anxiety. Successful examples of thrillers are the films of Alfred Hitchcock. Thrillers generally keep the audience on the "edge of their seats" as the plot builds towards a climax. The cover-up of important information is a common element. Literary devices such as red herrings, plot twists, unreliable narrators, and cliffhangers are used extensively. A thriller is often a villain-driven plot, whereby they present obstacles that the protagonist must overcome.

Writer Vladimir Nabokov, in his lectures at Cornell University, said:

"In an Anglo-Saxon thriller, the villain is generally punished, and the strong silent man generally wins the weak babbling girl, but there is no governmental law in Western countries to ban a story that does not comply with a fond tradition, so that we always hope that the wicked but romantic fellow will escape scot-free and the good but dull chap will be finally snubbed by the moody heroine."

Thrillers may be defined by the primary mood that they elicit: suspenseful excitement. In short, if it "thrills", it is a thriller. As the introduction to a major anthology says:

Suspense is a crucial characteristic of the thriller genre. It gives the viewer a feeling of pleasurable fascination and excitement mixed with apprehension, anticipation, and tension. These develop from unpredictable, mysterious, and rousing events during the narrative, which makes the viewer or reader think about the outcome of certain actions. Suspense builds in order to make those final moments, no matter how short, the most memorable. The suspense in a story keeps the person hooked to reading or watching more until the climax is reached. In terms of narrative expectations, it may be contrasted with curiosity and surprise. The objective is to deliver a story with sustained tension, surprise, and a constant sense of impending doom. As described by film director Alfred Hitchcock, an audience experiences suspense when they expect something bad to happen and have (or believe they have) a superior perspective on events in the drama's hierarchy of knowledge, yet they are powerless to intervene to prevent it from happening. Suspense in thrillers is often intertwined with hope and anxiety, which are treated as two emotions aroused in anticipation of the conclusion - the hope that things will turn out all right for the appropriate characters in the story, and the fear that they may not. The second type of suspense is the "...anticipation wherein we either know or else are fairly certain about what is going to happen but are still aroused in anticipation of its actual occurrence." According to Greek philosopher Aristotle in his book ''Poetics'', suspense is an important building block of literature, and this is an important convention in the thriller genre. Thriller music has been shown to create distrust and ominous uncertainty between the viewer of a film and the character on screen at the time when the music is playing.

Common methods and themes in crime and action thrillers are mainly ransoms, captivities, heists, revenge, kidnappings. Common in mystery thrillers are investigations and the whodunit technique. Common elements in dramatic and psychological thrillers include plot twists, psychology, obsession and mind games. Common elements of science-fiction thrillers are killing robots, machines or aliens, mad scientists and experiments. Common in horror thrillers are serial killers, stalking, deathtraps and horror-of-personality. Elements such as fringe theories, false accusations and paranoia are common in paranoid thrillers. Threats to entire countries, spies, espionage, conspiracies, assassins and electronic surveillance are common in spy thrillers. Characters may include criminals, stalkers, assassins, innocent victims (often on the run), menaced women, psychotic individuals, spree killers, sociopaths, agents, terrorists, cops and escaped cons, private eyes, people involved in twisted relationships, world-weary men and women, psycho-fiends, and more. The themes frequently include terrorism, political conspiracy, pursuit, or romantic triangles leading to murder. Plots of thrillers involve characters which come into conflict with each other or with outside forces. The protagonist of these films is set against a problem. No matter what subgenre a thriller film falls into, it will emphasize the danger that the protagonist faces. The protagonists are frequently ordinary citizens unaccustomed to danger, although commonly in crime and action thrillers, they may also be "hard men" accustomed to danger such as police officers and detectives. While protagonists of thrillers have traditionally been men, women lead characters are increasingly common. In psychological thrillers, the protagonists are reliant on their mental resources, whether it be by battling wits with the antagonist or by battling for equilibrium in the character's own mind. The suspense often comes from two or more characters preying upon one another's minds, either by playing deceptive games with the other or by merely trying to demolish the other's mental state.

An atmosphere of menace and sudden violence, such as crime and murder, characterize thrillers. The tension usually arises when the character(s) is placed in a dangerous situation, or a trap from which escaping seems impossible. Life is threatened, usually because the principal character is unsuspectingly or unknowingly involved in a dangerous or potentially deadly situation. Hitchcock's films often placed an innocent victim (an average, responsible person) into a strange, life-threatening or terrorizing situation, in a case of mistaken identity or wrongful accusation. Thrillers take place mostly in ordinary suburbs and cities, although sometimes they may take place wholly or partly in exotic settings such as foreign cities, deserts, polar regions, or the high seas. These usually tough, resourceful, but essentially ordinary heroes are pitted against villains determined to destroy them, their country, or the stability of the free world. Often in a thriller movie, the protagonist is faced with what seem to be insurmountable problems in his mission, carried out against a ticking clock, the stakes are high and although resourceful, they face personal dilemmas along the way forcing them to make sacrifices for others.

Ancient epic poems such as the ''Epic of Gilgamesh'', Homer's ''Odyssey'' and the ''Mahābhārata'' may have used similar narrative techniques to modern thrillers. ''The Three Apples'', a tale in the ''One Thousand and One Nights'' (''Arabian Nights''), is a murder mystery with multiple plot twists and detective fiction elements. In this tale, a fisherman discovers a heavy locked chest along the Tigris river and he sells it to the Abbasid Caliph, Harun al-Rashid, who then has the chest broken open only to find inside it the dead body of a young woman who was cut into pieces. Harun orders his vizier, Ja'far ibn Yahya, to solve the crime and find the murderer within three days. This whodunit mystery has also been considered a detective story, though it lacks a sleuth. ''The Count of Monte Cristo'' (1844) is a swashbuckling revenge thriller about a man named Edmond Dantès who is betrayed by his friends and sent to languish in the notorious Château d'If. His only companion is an old man who teaches him everything from philosophy to mathematics to swordplay. Just before the old man dies, he reveals to Dantès the secret location of a great treasure. Shortly after, Dantès engineers a daring escape and uses the treasure to reinvent himself as the Count of Monte Cristo. Thirsting for vengeance, he sets out to punish those who destroyed his life. The first recognizable modern thriller was Erskine Childer’s ''The Riddle of the Sands'' (1903), in which two young Englishmen stumble upon a secret German armada preparing to invade their homeland. ''The Thirty-Nine Steps'' (1915) is an early thriller by John Buchan, in which an innocent man becomes the prime suspect in a murder case and finds himself on the run from both the police and enemy spies. ''The Manchurian Candidate'' (1959) by Richard Condon is a classic of Cold War tensions. A squad of American soldiers is kidnapped and brainwashed by Communists. False memories are implanted, along with a subconscious trigger that turns them into assassins at a moment's notice. They are soon reintegrated into American society as sleeper agents. One of them, Major Bennett Marco, senses that not all is right, setting him on a collision course with his former comrade Sergeant Raymond Shaw, who has been activated as an assassin. ''The Spy Who Came in from the Cold'' (1963) by John le Carré is set in the world of Cold War espionage and helped to usher in an era of more realistic thriller fiction, based around professional spies and the battle of wits between rival spymasters. ''The Bourne Identity'' (1980) is one of the first thrillers to be written in the modern style that we know today. A man with gunshot wounds is found floating unconscious in the Mediterranean Sea. Brought ashore and nursed back to health, he wakes up with amnesia. Fiercely determined to uncover the secrets of his past, he embarks on a quest that sends him spiraling into a web of violence and deceit. He is astounded to learn that knowledge of hand-to-hand combat, firearms, and trade craft seem to come naturally to him.

There have been at least two television series called simply ''Thriller'', one made in the U.S. in the 1960s and one made in the UK in the 1970s. Although in no way linked, both series consisted of one-off dramas, each utilising the familiar motifs of the genre. ''The Twilight Zone'' consists of suspenseful unrelated dramas depicting characters dealing with paranormal, futuristic, supernatural, or otherwise disturbing or unusual events. Characters who find themselves dealing with these strange, sometimes inexplicable happenings are said to have crossed over into "The Twilight Zone". Each story typically features a moral and a surprise ending. ''24'' is a fast-paced television series with a premise inspired by the War on Terror. Each season takes place over the course of twenty-four hours, with each episode happening in "real time". Featuring a split-screen technique and a ticking onscreen clock, ''24'' follows the exploits of federal agent Jack Bauer as he races to foil terrorist threats. ''Lost'', which deals with the survivors of a plane crash, sees the castaways on the island forced to deal with a monstrous being that appears as a cloud of black smoke, a conspiracy of "Others" who have kidnapped or killed their fellow castaways at various points, a shadowy past of the island itself that they are trying to understand, polar bears, and the fight against these and other elements as they struggle simply to stay alive and get off of the island. ''Prison Break'' follows Michael Scofield, an engineer who has himself incarcerated in a maximum-security prison in order to break out his brother, who is on death row for a crime he did not commit. In the first season Michael must deal with the hazards of prison life, the other inmates and prison staff, and executing his elaborate escape plan, while outside the prison Michael's allies investigate the conspiracy that led to Lincoln being framed. In the second season, Michael, his brother and several other inmates escape the prison and must evade the nationwide manhunt for their re-capture, as well as those who want them dead. ''The Fugitive'' was a television series in which Dr. Richard Kimble was on the run from authorities while trying to find the man whom he claimed murdered his wife.