The family (biology), family Threskiornithidae includes 34 species of large wading birds. The family has been traditionally classified into two subfamilies, the ibises and the spoonbills; however recent genetic studies are casting doubt on the arrangement, and revealing the spoonbills to be nested within the old world ibises, and the new world ibises as an early offshoot.

The family Threskiornithidae was formerly known as Plataleidae. The spoonbills and ibises were once thought to be related to other groups of long-legged wading birds in the order Ciconiiformes. A recent study found that they are members of the order Pelecaniformes. In response to these findings, the International Ornithological Congress (IOC) recently reclassified Threskiornithidae and their sister taxa Ardeidae under the order Pelecaniformes instead of the previous order of Ciconiiformes. Whether the two subfamilies are reciprocally Monophyly, monophyletic is an open question. The South American Checklist Committee's entry for the Threskiornithidae includes the following comment "Two subfamilies are traditionally (e.g., Matheu & del Hoyo 1992) recognized: Threskiornithinae for ibises and Plataleinae for spoonbills; because the main distinction has to do with bill shape, additional information, especially genetic, is required to recognize a major, deep split in the family." A study of mitochondrial DNA of the spoonbills plus the Sacred ibis, sacred and scarlet ibises found that the spoonbills formed a clade with old world genus ''Threskiornis'', with ''Nipponia nippon'' and ''Eudocimus'' as progressively earlier offshoots and more distant relatives, and hence casts doubt on the arrangement of the family into ibis and spoonbill subfamilies. Subsequent studies have supported these findings, the spoonbills forming a monophyletic clade within the "widespread" clade of ibises, including ''Plegadis'' and ''Threskiornis'', while the "new World Endemic" clade is formed by the genera restricted to the Americas such as ''Eudocimus'' and ''Theristicus''.

Members of the family have long, broad wings with 11 primary feathers and about 20 secondaries. They are strong fliers and, rather surprisingly, given their size and weight, very capable soarers. The body tends to be elongated, the neck more so, with rather long legs. The bill is also long, decurved in the case of the ibises, straight and distinctively flattened in the spoonbills. They are large birds, but mid-sized by the standards of their order, ranging from the dwarf olive ibis (''Bostrychia bocagei''), at and , to the giant ibis (''Thaumatibis gigantea''), at and .

They are distributed almost worldwide, being found near almost any area of standing or slow-flowing fresh or brackish water. Ibises are also found in drier areas, including landfills. The Llanos are notable in that these wetland plains support seven species of ibis in the one region. All ibises are diurnal; spending the day feeding on a wide range of invertebrates and small vertebrates: ibises by probing in soft earth or mud, spoonbills by swinging the bill from side to side in shallow water. At night, they roost in trees near water. They are gregarious, feeding, roosting, and flying together, often in formation. Nesting is colonial in ibises, more often in small groups or singly in spoonbills, nearly always in trees overhanging water, but sometimes on islands or small islands in swamps. Generally, the female builds a large structure out of Reed bed, reeds and sticks brought by the male. Typical clutch size is two to five; hatching is asynchronic. Both sexes incubate in shifts, and after hatching feed the young by partial regurgitation. Two or three weeks after hatching, the young no longer need to be brooded continuously and may leave the nest, often forming creches but returning to be fed by the parents. 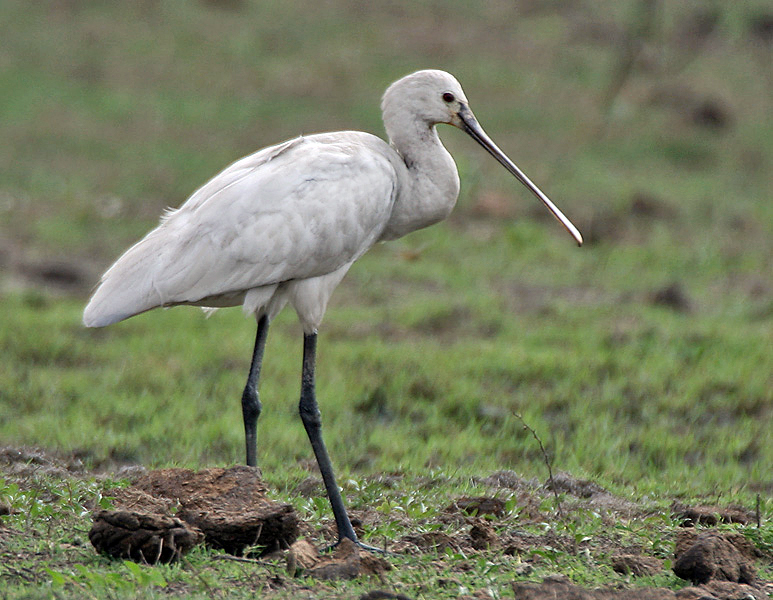