Click Here for Items Related To - The San Diego Union-Tribune


''The San Diego Union-Tribune'' is an American metropolitan daily newspaper, published in San Diego, California. Its name derives from a 1992 merger between the two major daily newspapers at the time, ''The San Diego Union'' and the ''San Diego Evening Tribune''. The name changed to ''U-T San Diego'' in 2012 but was changed again to ''The San Diego Union-Tribune'' in 2015. In 2015, it was acquired by Tribune Publishing. In February 2018 it was announced to be sold, along with the ''Los Angeles Times'', to Patrick Soon-Shiong's investment firm Nant Capital LLC for $500 million plus $90 million in pension liabilities. The sale was completed on June 18, 2018. 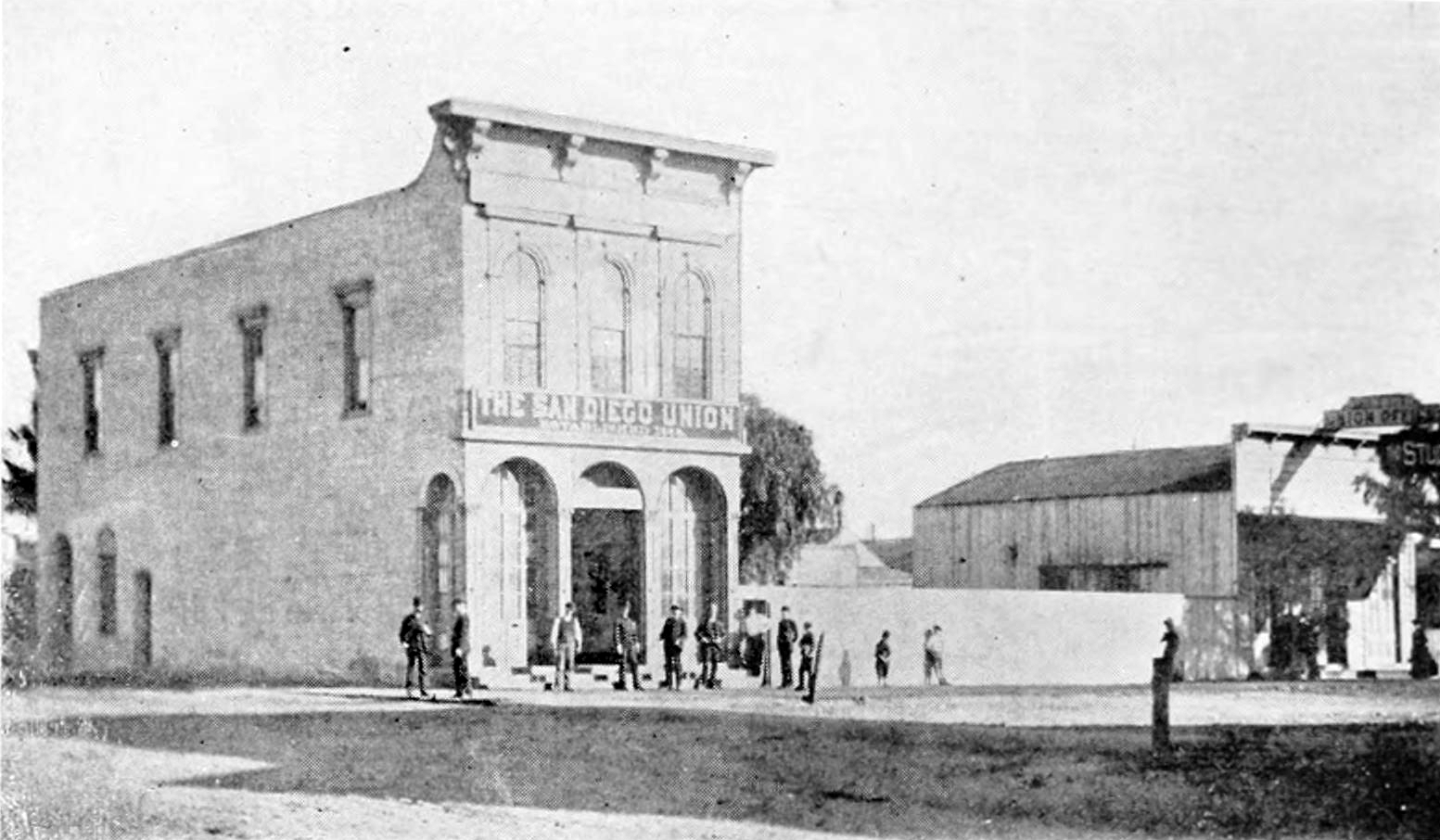 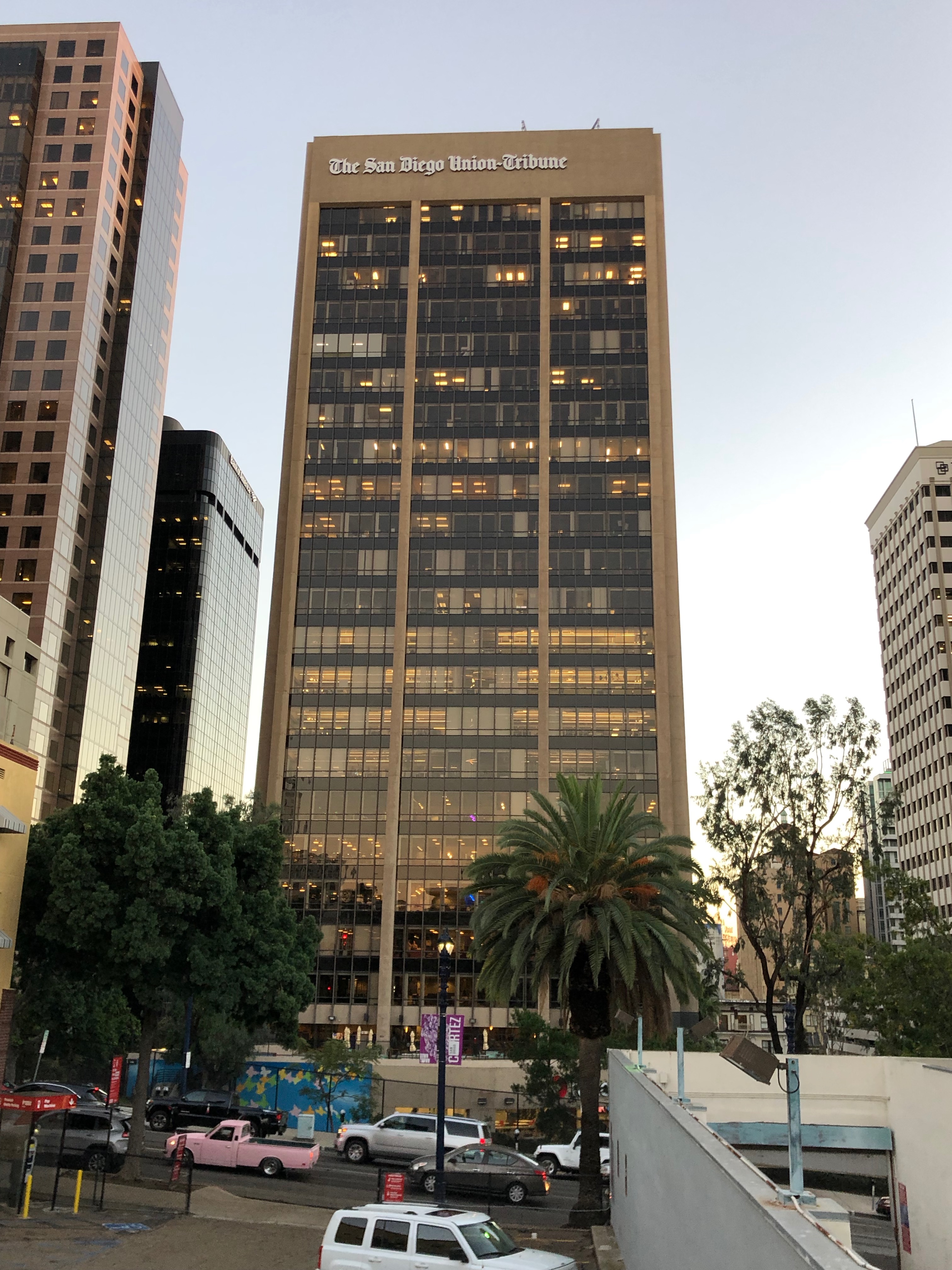 Both the ''Union'' and the ''Tribune'' were acquired by Copley Press in 1928 and were merged on February 2, 1992. The merged newspaper was sold to the private investment group Platinum Equity of Beverly Hills, California, on March 18, 2009.

On August 17, 2010, the ''Union-Tribune'' changed its design to improve "clarity, legibility, and ease of use". Changes included being printed on thinner, 100 percent recycled paper, moving the comics to the back of the business section, and abbreviating the title ''The San Diego Union-Tribune'' on the front page to ''U-T San Diego''. The ''U-T'' nameplate was created by Jim Parkinson, a type designer who also created nameplates for ''The Rolling Stone'', ''Esquire'', and ''Newsweek''.

On May 7, 2015, it was announced that the Tribune Publishing Company, publisher of the ''Los Angeles Times'', the ''Chicago Tribune'', and other newspapers, had reached a deal to acquire ''U-T San Diego'' and its associated properties for $85 million. The sale ended the newspaper's 146 years of private ownership. The transaction was completed on May 21, 2015. On the same date, the newspaper reintroduced its previous branding as ''The San Diego Union-Tribune''. The ''Union-Tribune'' and the ''Los Angeles Times'' became part of a new operating entity known as the California News Group, with both newspapers led by ''Times'' publisher and chief executive officer Austin Beutner. The two newspapers reportedly would retain distinct operations, but there would be a larger amount of synergy and content sharing between them. The acquisition did not include the newspaper's headquarters, which was retained by Manchester and would be leased by the newspaper. On May 26, 2015, the newspaper announced it would lay off 178 employees, representing about thirty percent of the total staff, as it consolidated its printing operations with the ''Times'' in Los Angeles. In 2016, ''The San Diego Union Tribune'' acquired the monthly entertainment magazine ''Pacific San Diego''. On June 13, 2015, at 10:02 p.m. PDT the final run of ''The San Diego Union Tribune'' was printed at the San Diego headquarters in Mission Valley began. It was to print the Sunday edition newspaper for June 14, 2015. The following Monday's newspaper would be printed at the ''Los Angeles Times'' location. The dismantling of the printing presses in Mission Valley began in mid-September 2015.

In February 2018, a deal was reached to sell the ''Union-Tribune'' to Patrick Soon-Shiong, a medical doctor who has made billions as a biotech entrepreneur. The deal also included the ''Los Angeles Times'' and multiple community newspapers. The sale closed on June 18, 2018.

The newspaper was originally located in Old Town San Diego, and was moved to downtown San Diego in 1871. In 1973, it moved to a custom-built, brick and stone office and printing plant complex in Mission Valley. The newspaper moved back downtown in May 2016, to offices on the 9th through 12th floors of a tower at 600 B Street. The Union-Tribune was to be the named tenant of the building, replacing Bridgepoint Education and, before that, Comerica.

* 1979, Breaking News Reporting: San Diego ''Evening Tribune'' for its coverage of the PSA Flight 182 jetliner collision with a small plane over North Park. * 1987, Editorial Writing: San Diego ''Evening Tribune'' editorial writer Jonathan Freedman for his editorials urging passage of the first major immigration reform act in 34 years. * 2006, National Reporting: The San Diego ''Union-Tribune'' and Copley News Service (with notable work by Marcus Stern and Jerry Kammer), for their disclosure of bribe-taking that sent former Rep. Randy "Duke" Cunningham to prison "in disgrace". They also received the George Polk Award for these stories. * 2009, Editorial Cartooning: Steve Breen "for his agile use of a classic style to produce wide ranging cartoons that engage readers with power, clarity and humor".

Under the Copleys' ownership, the newspaper had a reliably conservative editorial position, endorsing almost exclusively Republicans for elective office, and sometimes refusing to interview or cover Democratic candidates. Under Platinum Equity, the newspaper's editorial position "skewed closer to the middle" and showcased multiple viewpoints.

When Manchester and business partner John Lynch took ownership in 2011, they were open about their desire to use the newspaper to "promote their agenda of downtown development and politically conservative causes", with Lynch stating on KPBS radio that he and Manchester "wanted to be cheerleaders for all that is good in San Diego". Lynch expanded on this position in 2012, saying "We make no apologies. We are doing what a newspaper ought to do, which is to take positions. We are very consistent—pro-conservative, pro-business, pro-military—and we are trying to make a newspaper that gets people excited about this city and its future." This open promotion of certain viewpoints resulted in criticism from journalism professors and other newspaper editors, who worried that negative news about topics such as the military and business might not be covered. Dean Nelson, director of the journalism program at Point Loma Nazarene University, argued, "Now if you're saying we're going to be the cheerleaders of the military, why would you report on this guy that's taking bribes?... Where's the cheerleading there?" a reference to the ''Union-Tribunes Pulitzer Prize winning coverage of the Duke Cunningham bribery scandal. A ''New York Times'' writer added, "There is a growing worry that the falling value and failing business models of many American newspapers could lead to a situation where moneyed interests buy papers and use them to prosecute a political and commercial agenda. That future appears to have arrived in San Diego." Lynch said, "We totally respect the journalistic integrity of our paper and there is a clear line of demarcation between our editorials and our news. Our editor, Jeff Light, calls the shots." However, in November 2011 Lynch told the sports editor that the sports pages should advocate for a new football stadium; when a longtime sportswriter wrote skeptically about the idea, he was fired.

In January 2012, two months after Manchester bought the ''U-T'', the newspaper featured a front-page proposal for downtown redevelopment, to include a downtown football stadium and an expansion of the San Diego Convention Center. Both properties are adjacent to hotels that Manchester owns. In September 2012, ''Investigative Newsource'' reporter Brooke Williams obtained articles that claimed Lynch "threatened" Port Commissioner Scott Peters, who was running for Congress, "with a newspaper campaign to dismantle the Unified Port of San Diego". In e-mails obtained by Williams, Lynch was quoted as indicating that if the Dole Food Company obtained a long-term contract, that the Port's independence governance would be questioned in editorial coverage. Williams said the effort showed "the extent to which the newspaper's new owners will go to push their vision for a football stadium on the Tenth Avenue Marine Terminal",

During the 2012 mayoral election the owners of the ''U-T'' donated to Republican City Council Member Carl DeMaio's campaign, and the newspaper ran several prominent editorials favoring DeMaio. Those endorsements were wrapped around the front section of the newspaper on a separate page, "as though they were even more important" than the front page. In October 2012, a poll was taken by the ''U-T'' asking respondents to choose between DeMaio and Democratic Congressman Bob Filner in the mayoral election to be held in November. A rival news outlet noted that "Employees of a newspaper, television / radio station, marketing / public opinion research company or the city of San Diego—or who live with someone employed in one of those fields" were excluded from the poll results, which showed the Republican leading the Democrat, 46 percent to 36 percent. Reporter Kelly Davis of SDCityBeat.com wrote: "Common sense dictates that those votes y city employees or those living with themwould swing in Filner's favor due to DeMaio's long-running feud with city-employee unions." But ''U-T'' assignment editor Michael Smolens replied that "city employees were excluded to avoid political entanglements" in other parts of the ballot as well as in the mayor's race. Despite the newspaper's efforts, DeMaio lost to Filner. Lynch handed day-to-day operations to another executive in February 2014, and editor Jeff Light became company president in January 2015. In 2016, Light was named publisher.

* List of newspapers in California * Media in San Diego