Click Here for Items Related To - The Flying Nun


''The Flying Nun'' is an American sitcom about a community of nuns which included one who could fly when the wind caught the large headpiece of her habit. It was produced by Screen Gems for ABC based on the 1965 book ''The Fifteenth Pelican,'' written by Tere Rios. Sally Field starred as the title character, Sister Bertrille. The series originally ran on ABC from September 7, 1967, to April 3, 1970, producing 82 episodes, including a one-hour pilot episode.

Developed by Bernard Slade, the series centered on the adventures of a community of nuns in the Convent San Tanco in San Juan, Puerto Rico. The comic elements of the storyline were provided by the flying ability of a novice nun, Sister Bertrille. In the hour-long series pilot, Chicago native Elsie Ethrington arrives in San Juan from New York City after her arrest for having been involved in a protest; she then adopts the name of Sister Bertrille. It is also later learned (in the episode "My Sister, The Sister") that Sister Bertrille comes from a family of physicians, and that she is the only member of that family who did not follow in their footsteps. She instead became a nun, joining the Convento San Tanco, after being impressed by the missionary work of her aunt, and broke up with her boyfriend of eight months, a toy salesman. Sister Bertrille could be relied upon to solve any problem that came her way by her ability to catch a passing breeze and fly. This was generally attributed to her weighing under , high winds at the Convent high on the ocean bluffs, and the large, heavily starched cornette that was the headpiece for her habit. (The cornette was based on one worn until the middle 1960s by the Daughters of Charity, although Sister Bertrille was never said to belong to that order. Indeed, the order which included the Convento San Tanco was never actually specified in the series.) Her flying talents caused as many problems as they solved. She explains her ability to fly by stating, "When lift plus thrust is greater than load plus drag, anything can fly." In one episode, she tries to gain weight so she could stay grounded, but the attempt fails. Additionally, in the first-season episode "Young Man with a Cornette," she specifically tells a young boy who intended to use her cornette to fly that there were many factors other than her weight (which was distributed differently from that of the boy) that made her flying possible. She was unable to take off only when heavy rains or storms caused her starched cornette to lose its shape, when she had to wear something that would keep her grounded at all times, or, on one occasion in the episode titled "The Flying Dodo", when an inner ear infection caused her to lose her balance. 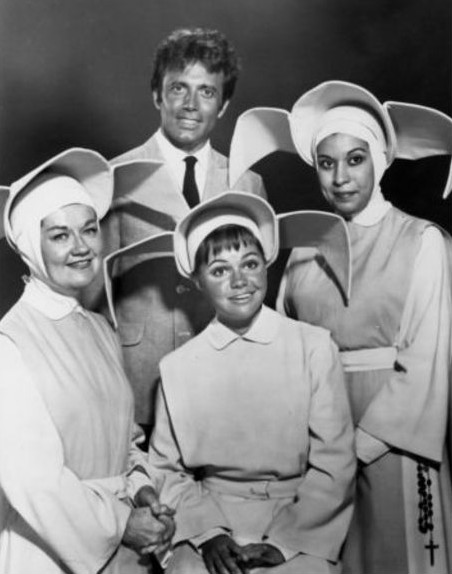 * Sally Field as Sister Bertrille, real name Elsie Ethrington, a novice nun who only weighs 90 pounds, allowing her to fly while wearing her cornette and when the wind is right. This was Field's second situation-comedy role, following ''Gidget.'' * Madeleine Sherwood as Reverend Mother Placido, the somber but gentle woman who runs the convent. * Marge Redmond as Sister Jacqueline, a wise nun with a sense of humor and Sister Bertrille's friend. Her voice is also heard as the narrator, who sets up each episode. * Shelley Morrison as Sister Sixto, a Puerto Rican nun who always misinterprets English slang. * Linda Dangcil as Sister Ana, another young novice. * Vito Scotti as Captain Gaspar Fomento, the local police officer and the only regular character in the series who never knew about Sister Bertrille's ability to fly. * Alejandro Rey as Carlos Ramirez, a local casino owner and playboy. Ramirez is an orphan raised by the nuns, and though his is a "sinful" life by comparison to their ideals, he still maintains his gratitude, helping them whenever he can. This constantly leads him to get swept, usually against his will, into Sister Bertrille's zany schemes, which she concocts with alarming frequency.

After the cancellation of ABC's ''Gidget,'' in which Sally Field starred in the title role, producers sought a way to keep Field on the air. As a result, ''The Flying Nun'' was developed. Field found the concept of the show silly and refused the role at first, only to resettle on it after her stepfather, Jock Mahoney, warned her that she might not work again in show business if she did not accept the role. Screen Gems dismissed its second choice, Ronne Troup, who had already begun filming the pilot. Field recalled hanging from a crane and being humiliated by a parade of episodic television directors, one of whom actually grabbed her shoulders and moved her into position as if she were a prop. She credits co-star Madeleine Sherwood for encouraging her to enroll in acting classes. Field has commented that she has great affection for her young ''Gidget'' persona and was proud of her work on that show, but she has also admitted that she disliked and was embarrassed with ''The Flying Nun.''