Syama Prasad Mukherjee (6 July 1901 – 23 June 1953) was an Indian politician, barrister and academician, who served as the Minister for Industry and Supply in Prime Minister Jawaharlal Nehru's cabinet. After falling out with Nehru, protesting against the Nehru-Liaquat Pact, Mukherjee resigned from Nehru's cabinet. With the help of the Rashtriya Swayamsevak Sangh, he founded the Bharatiya Jana Sangh, the predecessor to the Bharatiya Janata Party, in 1951. He was also the president of Akhil Bharatiya Hindu Mahasabha from 1943 to 1946.. He died in the custody of Jammu and Kashmir Police in 1953. He was provisionally diagnosed of a heart attack and shifted to a hospital but died a day later. In 2004, Atal Bihari Vajpayee had claimed that he was murdered in a "Nehru conspiracy". Since the Bharatiya Janata Party is the successor to the Bhartiya Jana Sangh, Mukherjee is also regarded as the founder of the Bharatiya Janata Party.

Syama Prasad Mukherjee was born in a Bengali Brahmin family on 6 July 1901 in Calcutta (Kolkata). His family originally hailed from Jirat, Hooghly District, West Bengal. His grandfather Ganga Prasad Mukherjee was born in Jirat and he was first in the family who came to Calcutta and settled here. Syama Prasad's father was Ashutosh Mukherjee, a judge of the High Court of Calcutta, Bengal, who was also Vice-Chancellor of the University of Calcutta. His mother was Jogamaya Devi Mukherjee. He was a very meritorious student and he came to Kolkata to study in Medical College with the help of the wealthy people of Jirat. Later he settled down in Bhawanipore area of Kolkata. He enrolled in Bhawanipur's Mitra Institution in 1906 and his behaviour in school was later described favourably by his teachers. In 1914, he passed his matriculation examination and was admitted into Presidency College. He stood seventeenth in the Inter Arts Examination in 1916and graduated in English, securing the first position in first class in 1921. He was married to Sudha Devi on 16 April 1922. Mukherjee also completed an MA in Bengali, being graded as first class in 1923 and also became a fellow of the Senate in 1923. He completed his BL in 1924. He enrolled as an advocate in Calcutta High Court in 1924, the same year in which his father had died. Subsequently, he left for England in 1926 to study at Lincoln's Inn and was called to the English Bar in the same year. In 1934, at the age of 33, he became the youngest Vice-Chancellor of the University of Calcutta; he held the office until 1938. During his term as Vice-Chancellor, Rabindranath Tagore delivered the University Convocation Address in Bengali for the first time, and the Indian vernacular was introduced as a subject for the highest examination. On 10 September 1938, the Senate of Calcutta university resolved to confer honorary D. Litt. on the Ex-Vice Chancellor in its opinion "by reason of eminent position and attainments, a fit and proper person to receive such a degree." Mukherjee received the D.Litt from Calcutta University on 26 November 1938.

Mukherjee started his political career in 1929, when he entered the Bengal Legislative Council as an Indian National Congress (INC) candidate representing Calcutta University. However, he resigned the next year when the INC decided to boycott the legislature. Subsequently, he contested the election as an independent candidate and was elected in the same year. In 1937, he was elected as an independent candidate in the elections which brought the Krishak Praja Party to power. He served as the Finance Minister of Bengal Province in 1941–42 under A.K. Fazlul Haq's Progressive Coalition government which was formed on 12 December 1941 after the resignations of the Congress government. During his tenure, his statements against the government were censored and his movements were restricted. He was also prevented from visiting the Midnapore district in 1942 when severe floods caused a heavy loss of life and property. He resigned on 20 November 1942 accusing the British government of trying to hold on to India under any cost and criticised its repressive policies against the Quit India Movement. After resigning, he mobilised support and organised relief with the help of Mahabodhi Society, Ramakrishna Mission and Marwari Relief Society. In 1946, he was again elected as an independent candidate from the Calcutta University. He was elected as a member of the Constituent Assembly of India in the same year.

Leader of the Hindu Mahasabha 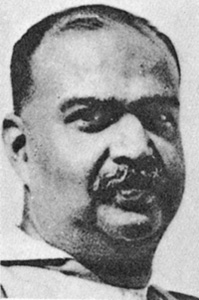 Mukherjee joined the Hindu Mahasabha in Bengal in 1939 and became its acting president that same year. He was appointed as the working president of the organisation in 1940. In February 1941, Mukherjee told a Hindu rally that if Muslims wanted to live in Pakistan they should "pack their bag and baggage and leave India ... owherever they like". Yet, the Hindu Mahasabha also formed provincial coalition governments with the All-India Muslim League in Sindh and the North-West Frontier Province while Mukherjee was its leader. He was elected as the President of Akhil Bharatiya Hindu Mahasabha in 1943. He remained in this position till 1946, with Laxman Bhopatkar becoming the new President in the same year. Mukherjee demanded the partition of Bengal in 1946 to prevent the inclusion of its Hindu-majority areas in a Muslim-dominated East Pakistan. A meeting held by the Mahasabha on 15 April 1947 in Tarakeswar authorised him to take steps for ensuring partition of Bengal. In May 1947, he wrote a letter to Lord Mountbatten telling him that Bengal must be partitioned even if India was not. He also opposed a failed bid for a united but independent Bengal made in 1947 by Sarat Bose, the brother of Subhas Chandra Bose, and Huseyn Shaheed Suhrawardy, a Bengali Muslim politician. His views were strongly affected by the Noakhali genocide in East Bengal, where mobs belonging to the Muslim League massacred Hindus.

Following the Hindu Mahasabha's official decision to boycott the Quit India movement and the Rashtriya Swayamsevak Sangh's decision of non-participation in the movement,. Mukherjee wrote a letter to Sir John Herbert, Governor of Bengal as to how they should respond to "Quit India" movement. In this letter, dated 26 July 1942 he wrote:

Let me now refer to the situation that may be created in the province as a result of any widespread movement launched by the Congress. Anybody, who during the war, plans to stir up mass feeling, resulting internal disturbances or insecurity, must be resisted by any Government that may function for the time being

Mukherjee in this letter reiterated that the Fazlul Haq-led Bengal Government, along with its alliance partner Hindu Mahasabha would make every possible effort to defeat the Quit India Movement in the province of Bengal and made a concrete proposal in regard to this:

The question is how to combat this movement (Quit India) in Bengal? The administration of the province should be carried on in such a manner that in spite of the best efforts of the Congress, this movement will fail to take root in the province. It should be possible for us, especially responsible Ministers, to be able to tell the public that the freedom for which the Congress has started the movement, already belongs to the representatives of the people. In some spheres, it might be limited during the emergency. Indians have to trust the British, not for the sake for Britain, not for any advantage that the British might gain, but for the maintenance of the defense and freedom of the province itself. You, as Governor, will function as the constitutional head of the province and will be guided entirely on the advice of your Minister.

The Indian historian R.C. Majumdar noted this fact and states:

Shyam Prasad ended the letter with a discussion of the mass movement organised by Congress. He expressed the apprehension that the movement would create internal disorder and will endanger internal security during the war by exciting popular feeling and he opined that any government in power has to suppress it, but that according to him could not be done only by persecution ... In that letter he mentioned item-wise the steps to be taken for dealing with the situation ...

During Mukherjee's resignation speech, however, he characterised the policies of the British government towards the movement as "repressive".

Opinion on special status of Jammu and Kashmir

Mukherjee was strongly opposed to Article 370, seeing it as a threat to national unity. He fought against it inside and outside the parliament with one of the goals of Bharatiya Jana Sangh being its abrogation. He raised his voice strongly against the provision in his Lok Sabha speech on 26 June 1952.