The first superior court of the Colony of New South Wales (known as the Supreme Court of Civil Judicature) was established by letters patent dated 2 April 1814, known as the ''Second Charter of Justice of New South Wales''. That charter provided that there should be a Supreme Court constituted by a Judge appointed by the King's commission and two Magistrates. The charter also created the Governor's Court and the Lieutenant-Governor's Court. The jurisdiction of the Governor's Court and the Supreme Court extended to Van Diemen's Land (the former name for Tasmania). All three courts were concerned with civil matters only.

Legislation to establish a new supreme court for both New South Wales and Van Diemen's Land was prepared in London by James Stephen, counsel to the Colonial Office, and Francis Forbes, Chief Justice of Newfoundland and Chief Justice-designate of New South Wales. The act was called an "Act to provide for the better administration of justice in New South Wales and Van Diemen's Land and for the more effectual government thereof" and is commonly numbered as "4 Geo. IV, c. 96". The statute was passed on 19 July 1823. In consequence of this legislation, letters patent establishing the New South Wales Supreme Court were sealed on 13 October 1823, and proclaimed in Sydney on 17 May 1824. They are known as the Third Charter of Justice of New South Wales. This charter provided that there should be a Chief Justice for the colony of New South Wales in the Island of New Holland (as the continent of Australia was then known), as well as other judges, a registrar, a prothonotary, a master, and a Keeper of Records and such other Officers as may be necessary for the administration of Justice in the colony. The charter also established the office of sheriff; gave precedence to the Chief Justice over all other subjects except the Governor (or acting Governor) of the colony; and allowed the Court to admit persons to be barristers, attorneys, proctors or solicitors as the case may be. Previously, a person had to be admitted as such in the United Kingdom. However, ex-convicts were not permitted to be admitted. In 1840, a Port Phillip division of the Court was created, consisting of a single Resident Judge, to exercise the court's jurisdiction in the Port Phillip District of the Colony of New South Wales. The division existed until 1852, when it was replaced by the Supreme Court of Victoria following the creation of the Colony of Victoria. Also in 1840, the Parliament of New South Wales established a separate equity division in the court. Limited jurisdiction in divorce cases was granted in 1873 and full Admiralty jurisdiction was added in 1911. The Supreme Court, in 1972, was one of the last Common Law jurisdictions in the world to fuse the administration of Equity and Common Law, although these continue as the historic names for the two divisions of the court. This process began in the United Kingdom with the passage of the Judicature Acts in 1873. Since 1930, three generations of the Street family have served New South Wales as Chief Justice. Supreme Court Judges Carolyn Simpson, Margaret Beazley and Virginia Bell made headlines in April 1999 when the three sat in the Court of Criminal Appeal in Sydney. The Judges threw out an appeal from a convicted computer hacker who had, out of "sheer maliciousness", been posting offensive messages on Ausnet's homepage. According to the Women Lawyers Association of NSW, there had never been an all-female bench in England or New Zealand at the time.

The court now operates under the , the , and the , although provisions on the appointment and removal of judicial officers were incorporated into the state's Constitution in 1992. The court consists of 52 permanent judges, three Acting Judges of Appeal, two Acting Judges, and an Associate Judge. Permanent judges include the Chief Justice of New South Wales, the President of the Court of Appeal, eleven Judges of Appeal (one of whom is currently the Chief Judge at Common Law), the Chief Judge at Common Law and the Chief Judge in Equity, and 38 Puisne Judges. The Chief Judge in each trial division also sits in the Court of Appeal from time to time. Occasionally, puisne judges also sit in the Court of Appeal, though this is uncommon. The court hears very serious cases such as murder and treason, civil cases involving more than $750 000, and civil matters such as wills, injunctions, and admiralty. The court's work at first instance is divided between the Common Law Division, which hears civil, criminal and administrative law matters, and the Equity Division, which hears equity, probate, commercial, admiralty, and protective matters. The court includes the Court of Appeal and the Court of Criminal Appeal which hear appeals from the District Court and the Local Court and from single judges sitting in the Common Law or Equity Divisions. The Court of Appeal also hears appeals from the Land and Environment Court of New South Wales and a number of administrative tribunals. The Court of Appeal and the Court of Criminal Appeal are respectively the highest civil and criminal courts in the state. To appeal to the High Court of Australia from the Court of Appeal or the Court of Criminal Appeal, special leave must be granted by the High Court. Appeals from state supreme courts to the High Court are not limited to matters in which a federal question arises and the Constitution empowers the Federal Parliament to make laws vesting state courts with federal jurisdiction. The High Court of Australia can review decisions of the Supreme Court of New South Wales in relation to the common law and equitable jurisdictions of the court as well. The High Court of Australia has exercised this power on a number of occasions.

The Supreme Court of New South Wales was proclaimed in Sydney on 17 May 1824. 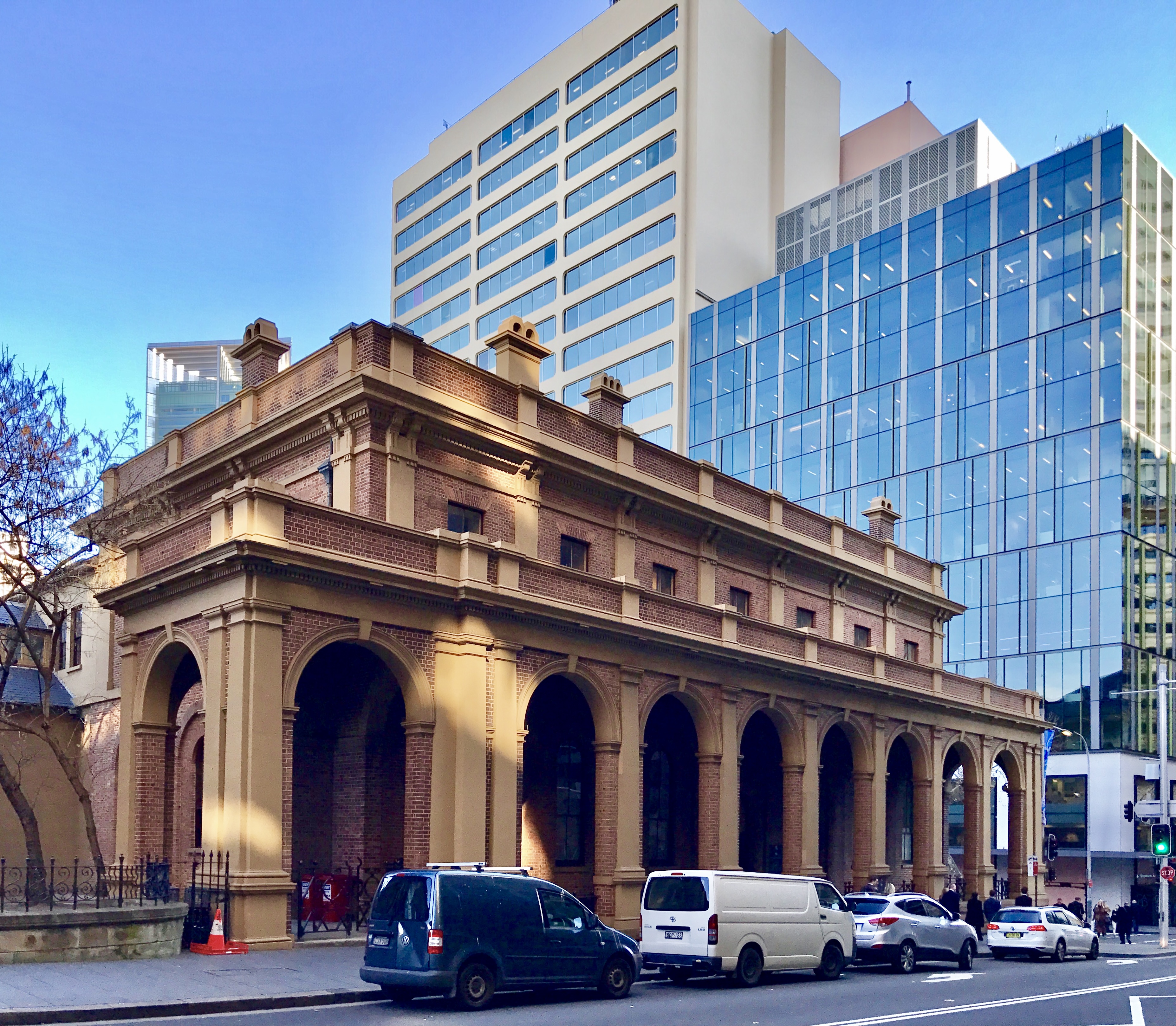 The inaugural Supreme Court building that is located on the corner of King Street and Elizabeth Street in the Sydney central business district, adjacent to what is now known as Queen's Square, was built between 1820 and 1828. The two-storey rectangular Georgian building, with an additional loggia and cornice added in 1868, was designed by Francis Greenway in 1819 under the direction of Governor Macquarie. This building is now called the Greenway Wing. Greenway was dismissed before the building was completed and its design was so modified by his successor, Standish Lawrence Harris, that the building barely resembles his original design. The building was occupied by the Supreme Court from 1827. In the 1860s James Barnet designed additions for the building including an arcaded loggia along the King Street façade and the new classical cornice and parapet for the roof, giving the structure a Victorian Italianate appearance. The building was added to the New South Wales State Heritage Register on 2 April 1999. Greenway was also responsible for designing the nearby Hyde Park Barracks, recorded on the UNESCO World Heritage List, and St James' Church, listed on the New South Wales State Heritage Register.

The second structure to house the Court is located immediately the southwest of the Greenway Wing on the corner of Elizabeth Street and St James Road. Designed by Government Architect Alexander Dawson, it is one of only two Government buildings which were designed in the Victorian Free Gothic style, the other being the nearby Land Titles Office. Built between 1859 and 1862 and listed on the New South Wales State Heritage Register on 2 April 1999, the site is now known as the Old Registry Building. Barnet extended the Old Registry building in 1875 and 1886.

Designed by Walter Liberty Vernon and built between 1895 and 1896 in the Federation Free Classical style, the two-storey rich red brick Banco Road Court building was the third location of the Supreme Court. The Banco Wing is located to the east of the Old Registry building on St James Road and south of the Greenway Wing and makes little reference to the earlier buildings in either style or detailing. The interior of the courtroom has aesthetic significance and is said to be modelled on St Stephen's Court in Dublin. Despite its naming, the Court is located in St James' Road, opposite the north-western edge of Hyde Park. There is no Banco Road.

In 1976 the New South Wales Government completed construction of the Sydney Law Courts building, facing Queen's Square and bounded by Phillip Street and Macquarie Street. The 27-storey building is owned by Law Courts Limited, a company whose shareholders comprise the Government of Australia and the Government of New South Wales. The building houses the High Court of Australia (when it sits in Sydney), the Federal Court of Australia and the NSW Supreme Court. The building was designed by architects McConnel Smith and Johnson and received an RAIA Merit Award in 1977 and stands as a strong, singular statement representative of its time and a product of the brutalist school of architecture. Refurbished in 2009 at a cost of 214 million, a range of sustainability measures were implemented to extend the life and amenity of the building.

The current judges serving on the Court , and the dates of their appointment, are listed below.