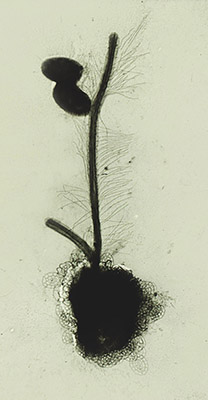 Stramenopile is a clade of organisms distinguished by the presence of stiff tripartite external hairs. In most species, the hairs are attached to flagella, in some they are attached to other areas of the cellular surface, and in some they have been secondarily lost (in which case relatedness to stramenopile ancestors is evident from other shared cytological features or from genetic similarity). Members of the clade are referred to as 'stramenopiles'. Stramenopiles are eukaryotes; since they are neither fungi, animals, nor plants, they are classified as protists. Most stramenopiles are single-celled, but some are multicellular algae including some brown algae. The group includes a variety of algal protists, heterotrophic flagellates, opalines and closely related proteromonad flagellates (all endobionts in other organisms); the actinophryid heliozoa, and oomycetes. The tripartite hairs have been lost in some stramenopiles - for example in most diatoms (although these organisms still express mastigonemic proteins - see below).


History and the Heterokont problem

The term 'Stramenopile' was introduced in 1989. It identified a group that overlapped with the ambiguously defined heterokonts. The term 'Heterokontae' had been introduced 90 years earlier by Alexander Luther for algae that are now considered the Xanthophyceae. Many stramenopiles are unicellular flagellates, and most others produce flagellated cells at some point in their lifecycles, for instance as gametes or zoospores. Historically the term heterokont referred to the fact that in these organisms the flagella of flagellated cells are dissimilar: the anterior flagellum has one or two rows of stiff hairs or mastigonemes, and the posterior flagellum is without such embellishments, being smooth, usually shorter, or in a few cases not projecting from the cell. However, the meaning of the term 'heterokont' was not stable. For example, Copeland used it to include the xanthophytes (using the name Vaucheriacea), a group that included what became known as the chrysophytes, the silicoflagellates, and the hyphochytrids. Copeland also included the unrelated collar flagellates (as the Choanoflagellata) in which he placed the bicosoecids, a type of stramenopile. He also included the haptophytes. The consequence of using multiple concepts to define the taxon 'heterokont' was that the meaning could only be made clear by making reference to its usage: Heterokontae sensu Luther 1899; Heterokontae sensu Copeland 1956, or later usage. The term 'Heterokont' lost its usefulness in critical discussions about the identity, nature, character and relatedness of the group.

At the time of writing, the concept of the taxon Heterokont, as used by some, has evolved to align with that of Stramenopiles.

The presumed apomorphy of tripartite flagellar hairs in stramenopiles is well characterized. The basal part of the hair is flexible and inserts into the cell membrane, the second part is dominated by a long stiff tube (the 'straw' or 'stramen'), and finally the tube is tipped by several delicate hairs. The proteins that code for the mastigonemes are also well characterized. As far as we know, these proteins are exclusive to the stramenopile clade, and are present even in taxa (such as diatoms) that no longer have physical hairs. A taxonomic concept based on a synapomorphy is independent of the organisms that are included. Thus it is stable and robust as new findings may lead to the addition, elimination or regrouping of contained taxa. Such a concept would be invalidated if the apomorphy in question were found to have evolved on more than one occasion. The current composition is summarized as: Stramenopiles without chloroplasts *Oomycetes (water molds) *Hyphochytridiomycetes *Developayellids also referred to as Bigyromonadea *Bicosoecea *Labyrinthulomycetes (slime nets) inclusive of thraustrochytids *Opalinesa *Proteromonadsea *''Blastocystis'' Stramenopiles with chloroplasts - Stramenochromes *Axodines (Pedinellids and aplastidic actinophryid heliozoa) *Bacillariophyceae (diatoms) *Bolidophyceae *Chrysomerophyceae *Chrysophyceae (golden algae) *Dictyochophyceae *Eustigmatophyceae *Pelagophyceae *Phaeothamniophyceae *Phaeophyceae (brown algae) *Pinguiophyceae *Raphidophyceae *Synchromophyceae *Synurophyceae *Xanthophyceae (yellow-green algae)

The name of the taxon has also been written as Straminopiles, or more formally as Straminipila. The name "stramenopile" has been discussed by David (2002). In terms of relatedness among protists, Krylov and co-workers proposed that the morphology of mitochondrial cristae remained relatively unchanged over time, and would define large sectors of protistan diversity. Subsequent molecular studies have confirmed this, with the stramenopiles being most closely related to Alveolates and Rhizaria - all with tubular mitochondrial cristae and collectively referred to as the SAR clade.

The stramenopiles with plastids (stramenochromes) have plastids with an off-green, orange, golden or brown color because of the occurrence of chlorophyll a, chlorophyll c, and fucoxanthin. This form of plastid is referred to as a chromoplast (as opposed to chloroplast which if used narrowly refers to the chlorophyll B containing plastids in green algae, some euglenids, and the land plants). The most significant autotrophic stramenopiles are the brown algae (wracks and many other seaweeds), and the diatoms. The latter are among the most significant primary producers in marine and freshwater ecosystems. The flagella are inserted subapically or laterally, and are usually supported by four microtubule roots in a distinctive pattern. Chromoplasts are surrounded by four membranes. The outermost is continuous with the chloroplast endoplasmic reticulum, or cER. The second membrane presents a barrier between the lumen of the cER and the primary endosymbiont or chloroplast. The symbiont was the source of the two innermost membranes within which the thylakoid membranes are found. Most molecular analyses suggest that the most basal stramenopiles are colorless heterotrophs. This suggests that the stramenopiles arose as heterotrophic organisms, diversified, and only at a later stage in their evolutionary history did they acquire chromoplasts. Some lineages (such as the axodine lineage that included the chrophytic pedinellids, colourless ciliophryids, and colourless actinophryid heliozoa) have secondarily reverted to heterotrophy.

Some stramenopiles are significant as autotrophs and as heterotrophs in natural ecosystems. ''Blastocystis'' is a parasite of humans; opalines and proteromonads live in the intestines of cold-blooded vertebrates; oomycetes include some significant plant pathogens (including the agent that caused the potato blight famine in Ireland that resulted in approximately one million deaths and led to extensive emigration). Diatoms are major contributors to global carbon cycles because they are the most important autotrophs in most marine habitats. The brown algae (or kelp) are major autotrophs of the intertidal and subtidal marine habitats. Some of the bacterivorous stramenopiles, such as ''Cafeteria'' are common and widespread consumers of bacteria, and thus play a major role in recycling carbon and nutrients within microbial food webs.