| mottoeng = "The wind of freedom blows" | type = Private research university | academic_affiliations = AAU
Space-grant | established = | founder = Leland and Jane Stanford | endowment = $27.7 billion (2019) | budget = $6.6 billion (2020–21) | president = Marc Tessier-Lavigne | provost = Persis Drell | academic_staff = 2,240 | administrative_staff = 12,508 excluding SHC | students = 17,249 (Fall 2019) | undergrad = 6,996 (Fall 2019) | postgrad = 10,253 (Fall 2019) | city = Stanford | state = California | country = United States | coordinates = | campus = Suburban, | free_label = Academic term | free = Quarter | colors = Cardinal and white
| athletics_nickname = Cardinal | sporting_affiliations = NCAA Division I FBS
| mascot = None | website = | logo = Stanford wordmark (2012).svg | logo_upright = .8 Stanford University, officially Leland Stanford Junior University, is a private research university in Stanford, California. Stanford was founded in 1885 by Leland and Jane Stanford in memory of their only child, Leland Stanford Jr., who had died of typhoid fever at age 15 the previous year. Stanford is generally ranked among the best universities in the world by academic publications. It is also one of the top fundraising institutions in the country, becoming the first school to raise more than a billion dollars in a year. Leland Stanford was a U.S. senator and former governor of California who made his fortune as a railroad tycoon. The school admitted its first students on October 1, 1891, as a coeducational and non-denominational institution. Stanford University struggled financially after the death of Leland Stanford in 1893 and again after much of the campus was damaged by the 1906 San Francisco earthquake. Following World War II, provost Frederick Terman supported faculty and graduates' entrepreneurialism to build self-sufficient local industry in what would later be known as Silicon Valley. The university is organized around seven schools: three schools consisting of 40 academic departments at the undergraduate level as well as four professional schools that focus on graduate programs in law, medicine, education, and business. All schools are on the same campus. Students compete in 36 varsity sports, and the university is one of two private institutions in the Division I FBS Pac-12 Conference. It has gained 127 NCAA team championships, and Stanford has won the NACDA Directors' Cup for 24 consecutive years, beginning in 1994–1995. In addition, Stanford students and alumni have won 270 Olympic medals including 139 gold medals. As of April 2021, 84 Nobel laureates, 29 Turing Award laureates, and eight Fields Medalists have been affiliated with Stanford as students, alumni, faculty, or staff. In addition, Stanford is particularly noted for its entrepreneurship and is one of the most successful universities in attracting funding for start-ups. Stanford alumni have founded numerous companies, which combined produce more than $2.7 trillion in annual revenue and have created 5.4 million jobs as of 2011, roughly equivalent to the 7th largest economy in the world (). Stanford is the alma mater of one president of the United States (Herbert Hoover), 74 living billionaires, and 17 astronauts. It is also one of the leading producers of Fulbright Scholars, Marshall Scholars, Rhodes Scholars, and members of the United States Congress. 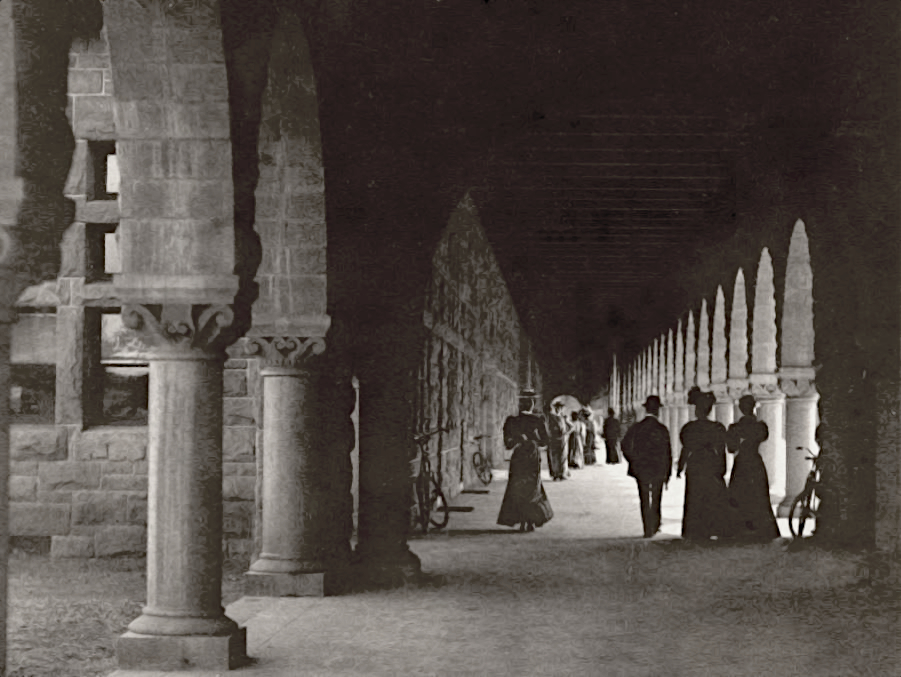 Stanford University was founded in 1885 by Leland and Jane Stanford, dedicated to Leland Stanford Jr, their only child. The institution opened in 1891 on Stanford's previous Palo Alto farm. Jane and Leland Stanford modeled their university after the great eastern universities, most specifically Cornell University. Stanford opened being called the "Cornell of the West" in 1891 due to faculty being former Cornell affiliates (professors, alumni, or both) including its first president, David Starr Jordan, and second president, John Casper Branner. Both Cornell and Stanford were among the first to have higher education be accessible, nonsectarian, and open to women as well as to men. Cornell is credited as one of the first American universities to adopt this radical departure from traditional education, and Stanford became an early adopter as well. Despite being impacted by earthquakes in 1906 and 1989, the campus was rebuilt each time. In 1919, The Hoover Institution on War, Revolution and Peace was started by Herbert Hoover to preserve artifacts related to World War I. The Stanford Medical Center, completed in 1959, is a teaching hospital with over 800 beds. The SLAC National Accelerator Laboratory (originally named the Stanford Linear Accelerator Center), established in 1962, performs research in particle physics. 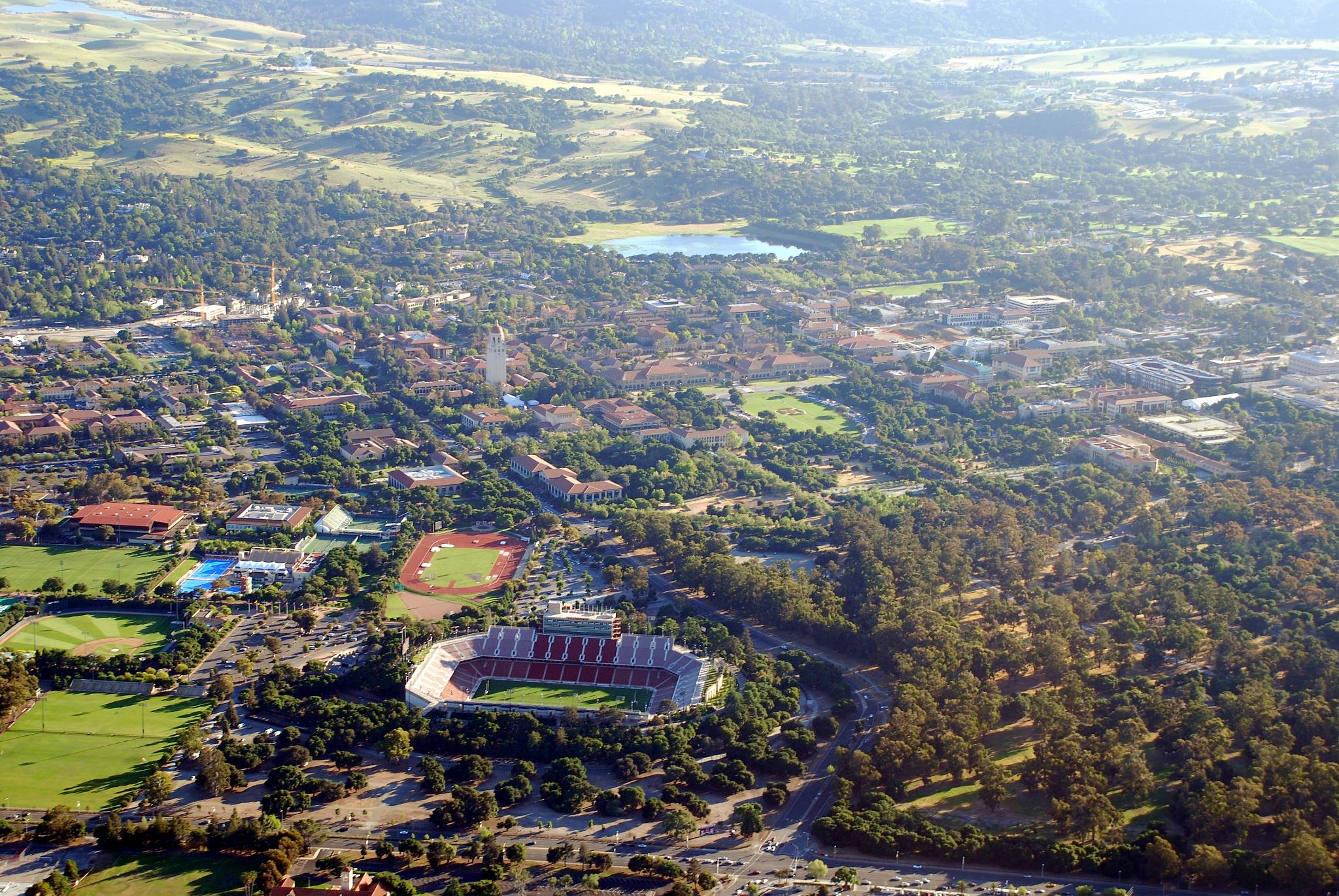 Most of Stanford is on an campus, one of the largest in the United States. It is on the San Francisco Peninsula, in the northwest part of the Santa Clara Valley (Silicon Valley) approximately southeast of San Francisco and approximately northwest of San Jose. In 2008, 60% of this land remained undeveloped. Stanford's main campus includes a census-designated place within unincorporated Santa Clara County, although some of the university land (such as the Stanford Shopping Center and the Stanford Research Park) is within the city limits of Palo Alto. The campus also includes much land in unincorporated San Mateo County (including the SLAC National Accelerator Laboratory and the Jasper Ridge Biological Preserve), as well as in the city limits of Menlo Park (Stanford Hills neighborhood), Woodside, and Portola Valley.

Stanford currently operates in various locations outside of its central campus. On the founding grant: * Jasper Ridge Biological Preserve is a natural reserve south of the central campus owned by the university and used by wildlife biologists for research. * SLAC National Accelerator Laboratory is a facility west of the central campus operated by the university for the Department of Energy. It contains the longest linear particle accelerator in the world, on of land. * Golf course and a seasonal lake: The university also has its own golf course and a seasonal lake (Lake Lagunita, actually an irrigation reservoir), both home to the vulnerable California tiger salamander. As of 2012 Lake Lagunita was often dry and the university had no plans to artificially fill it. Off the founding grant: * Hopkins Marine Station, in Pacific Grove, California, is a marine biology research center owned by the university since 1892. * Study abroad locations: unlike typical study abroad programs, Stanford itself operates in several locations around the world; thus, each location has Stanford faculty-in-residence and staff in addition to students, creating a "mini-Stanford." * Redwood City campus for many of the university's administrative offices in Redwood City, California, a few miles north of the main campus. In 2005, the university purchased a small, campus in Midpoint Technology Park intended for staff offices; development was delayed by The Great Recession. In 2015 the university announced a development plan and the Redwood City campus opened in March 2019. * The Bass Center in Washington, DC provides a base, including housing, for the Stanford in Washington program for undergraduates. It includes a small art gallery open to the public. * China: Stanford Center at Peking University, housed in the Lee Jung Sen Building, is a small center for researchers and students in collaboration with Peking University.

Many Stanford faculty members live in the "Faculty Ghetto," within walking or biking distance of campus. The Faculty Ghetto is composed of land owned by Stanford. Similar to a condominium, the houses can be bought and sold but the land under the houses is rented on a 99-year lease. Houses in the "Ghetto" appreciate and depreciate, but not as rapidly as overall Silicon Valley values.

Some of the land is managed to provide revenue for the university such as the Stanford Shopping Center and the Stanford Research Park. Stanford land is also leased for a token rent by the Palo Alto Unified School District for several schools including Palo Alto High School and Gunn High School. El Camino Park, the oldest Palo Alto city park (established 1914), is also on Stanford land.

Contemporary campus landmarks include the Main Quad and Memorial Church, the Cantor Center for Visual Arts and the Bing Concert Hall, the Stanford Mausoleum with the nearby Angel of Grief, Hoover Tower, the Rodin sculpture garden, the Papua New Guinea Sculpture Garden, the Arizona Cactus Garden, the Stanford University Arboretum, Green Library and the Dish. Frank Lloyd Wright's 1937 Hanna–Honeycomb House and the 1919 Lou Henry Hoover House are both listed on the National Register of Historic Places. White Memorial Fountain (also known as "The Claw") between the Stanford Bookstore and the Old Union is a popular place to meet and to engage in the Stanford custom of "fountain hopping"; it was installed in 1964 and designed by Aristides Demetrios after a national competition as a memorial for two brothers in the class of 1949, William N. White and John B. White II, one of whom died before graduating and one shortly after in 1952.

Stanford is a private, non-profit university administered as a corporate trust governed by a privately appointed board of trustees with a maximum membership of 38. Trustees serve five-year terms (not more than two consecutive terms) and meet five times annually. A new trustee is chosen by the current trustees by ballot. The Stanford trustees also oversee the Stanford Research Park, the Stanford Shopping Center, the Cantor Center for Visual Arts, Stanford University Medical Center, and many associated medical facilities (including the Lucile Packard Children's Hospital). The board appoints a president to serve as the chief executive officer of the university, to prescribe the duties of professors and course of study, to manage financial and business affairs, and to appoint nine vice presidents. The provost is the chief academic and budget officer, to whom the deans of each of the seven schools report. Persis Drell became the 13th provost in February 2017. As of 2018, the university was organized into seven academic schools. The schools of Humanities and Sciences (27 departments), Engineering (nine departments), and Earth, Energy & Environmental Sciences (four departments) have both graduate and undergraduate programs while the Schools of Law, Medicine, Education and Business have graduate programs only. The powers and authority of the faculty are vested in the Academic Council, which is made up of tenure and non-tenure line faculty, research faculty, senior fellows in some policy centers and institutes, the president of the university, and some other academic administrators, but most matters are handled by the Faculty Senate, made up of 55 elected representatives of the faculty. The Associated Students of Stanford University (ASSU) is the student government for Stanford and all registered students are members. Its elected leadership consists of the Undergraduate Senate elected by the undergraduate students, the Graduate Student Council elected by the graduate students, and the President and Vice President elected as a ticket by the entire student body. Stanford is the beneficiary of a special clause in the California Constitution, which explicitly exempts Stanford property from taxation so long as the property is used for educational purposes.

The university's endowment, managed by the Stanford Management Company, was valued at $27.7 billion as of August 31, 2019.