Springfield is a city in the state of Massachusetts, United States, and the seat of Hampden County. Springfield sits on the eastern bank of the Connecticut River near its confluence with three rivers: the western Westfield River, the eastern Chicopee River, and the eastern Mill River. As of the 2010 Census, the city's population was 153,060. As of 2019, the estimated population was 153,606, making it the third-largest city in Massachusetts, the fourth-most populous city in New England after Boston, Worcester, and Providence, and the 12th-most populous in the Northeastern United States. Metropolitan Springfield, as one of two metropolitan areas in Massachusetts (the other being Greater Boston), had a population of 692,942 as of 2010. Founded in 1636 as the first Springfield in the New World, during the American Revolution, George Washington designated it as the site of the Springfield Armory for its central location, subsequently the site of Shays' Rebellion. The city would also play a pivotal role in the Civil War, as a stop on the Underground Railroad and home of abolitionist John Brown, widely known for his raid on Harpers Ferry, and for the Armory's manufacture of the famed "Springfield rifles" used ubiquitously by Union troops. Closing during the Johnson administration, today the national park site features the largest collection of historic American firearms in the world. Today the city is the largest in western New England, and the urban, economic, and media capital of Massachusetts' section of the Connecticut River Valley, colloquially known as the Pioneer Valley. Springfield has several nicknames—"The City of Firsts", due to the many innovations developed there, such as the first American dictionary, the first American gas-powered automobile, and the first machining lathe for interchangeable parts; "The City of Homes", due to its Victorian residential architecture; and "Hoop City", as basketball—one of the world's most popular sports—was invented in Springfield in 1891 by James Naismith. Hartford, the capital of Connecticut, lies south of Springfield, on the western bank of the Connecticut River. The Hartford–Springfield region is known as the Knowledge Corridor because it hosts over 160,000 university students and over 32 universities and liberal arts colleges—the second-highest concentration of higher-learning institutions in the United States. The city of Springfield itself is home to Springfield College, Western New England University, American International College, and Springfield Technical Community College, among other higher educational institutions.

Springfield was founded in 1636 by English Puritan William Pynchon as "Agawam Plantation" under the administration of the Connecticut Colony. In 1641 it was renamed after Pynchon's hometown of Springfield, Essex, England, following incidents, including trade disputes as well as Captain John Mason's hostilities toward native tribes, which precipitated the settlement's joining the Massachusetts Bay Colony. During its early existence, Springfield flourished both as an agricultural settlement and as a trading post, although its prosperity waned dramatically during (and after) King Philip's War in 1675, when natives laid siege to it and burned it to the ground as part of the ongoing campaign. During that attack, three-quarters of the original settlement was burned to the ground, with many of Springfield's residents survived by taking refuge in John Pynchon's brick house, the "Old Fort", the first such house to be built in the Connecticut River Valley. Out of the siege, Miles Morgan and his sons were lauded as heroes; as one of the few homesteads to survive the attack, alerting troops in Hadley, as well as Toto, often referred to as the "Windsor Indian" who, running 20 miles from Windsor, Connecticut to the settlement, was able to give advance warning of the attack. The original settlement—today's downtown Springfield—was located atop bluffs at the confluence of four rivers, at the nexus of trade routes to Boston, Albany, New York City, and Montreal, and with some of the northeastern United States' most fertile soil. In 1777, Springfield's location at numerous crossroads led George Washington and Henry Knox to establish the United States' National Armory at Springfield, which produced the first American musket in 1794, and later the famous Springfield rifle. From 1777 until its closing during the Vietnam War, the Springfield Armory attracted skilled laborers to Springfield, making it the United States' longtime center for precision manufacturing. The near-capture of the armory during Shays' Rebellion of 1787 led directly to the formation of the U.S. Constitutional Convention.

During the 19th and 20th centuries, Springfielders produced many innovations, including the first American-English dictionary (1805, Merriam-Webster); the first use of interchangeable parts and the assembly line in manufacturing (1819, Thomas Blanchard); the first American horseless car (1825, Thomas Blanchard); the mass production of vulcanized rubber (1844, Charles Goodyear); the first American gasoline-powered car (1893, Duryea Brothers); the first successful motorcycle company (1901, "Indian"); one of America's first commercial radio stations (1921, WBZ, broadcast from the Hotel Kimball); and most famously, the world's second-most-popular sport, basketball (1891, Dr. James Naismith). Springfield would play major roles in machine production, initially driven by the arms industry of the Armory, as well as from private companies such as Smith & Wesson, established by Horace Smith and Daniel B. Wesson. Similarly, the industrial economy led Thomas and Charles Wason to establish the Wason Manufacturing Company, which produced the first manufactured sleeping car. The largest railcar works in New England, Wason produced 100 cars a day at its peak; the company was eventually was purchased by Brill in 1907 and closed during the Depression in 1937. Among numerous other industries, during the first half of the 20th century Springfield also produced brass goods, chemicals, clothing and knit goods, paper goods, watches, boilers, engines, manufacturing machinery, silverware, jewelry, skates, carriages, buttons, needles, toys, and printed books and magazines. Springfield underwent a protracted decline during the second half of the 20th century, due largely to the decommissioning of the Springfield Armory in 1969; poor city planning decisions, such as the location of the elevated I-91 along the city's Connecticut River front; and overall decline of industry throughout the northeastern United States. During the 1980s and 1990s, Springfield developed a national reputation for crime, political corruption, and cronyism. During the early 21st century, Springfield saw long-term revitalization projects and several large projects, including the $1 billion New Haven–Hartford–Springfield intercity rail; a $1 billion MGM casino. 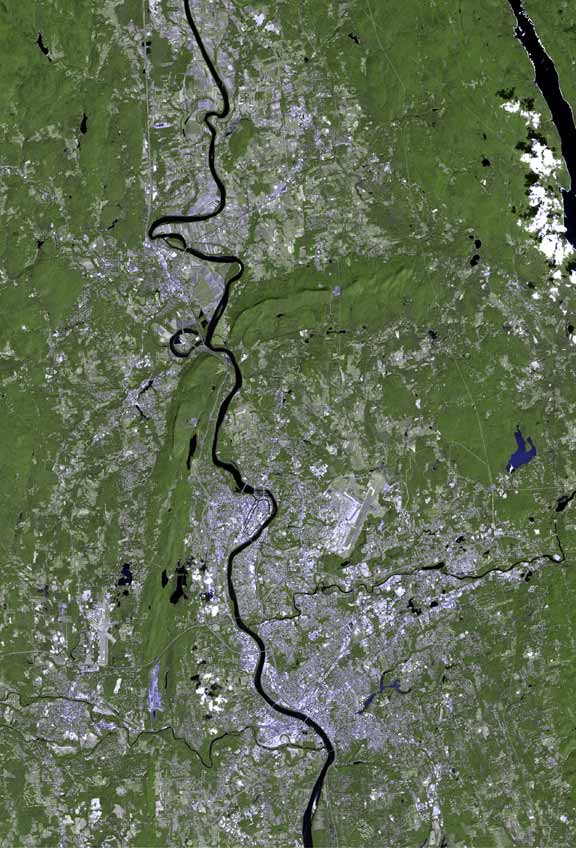 Springfield, like other cities in southern New England, has a hot-summer humid continental climate (Köppen: ''Dfa'') with four distinct seasons and precipitation evenly distributed throughout the year, but the intensity (and sometimes the duration) of warmer periods greater than northern areas. Winters are cold with a daily average in January of around . During winter, nor'easter storms can drop significant snowfalls on Springfield and the Connecticut River Valley. Temperatures below can occur each year, though the area does not experience the high snowfall amounts and blustery wind averages of nearby cities such as Worcester, Massachusetts and Albany, New York. Springfield's summers are very warm and sometimes humid. During summer, several times per month, on hot days afternoon thunderstorms will develop when unstable warm air collides with approaching cold fronts. The daily average in July is around . Usually several days during the summer exceed , constituting a "heat wave". Spring and fall temperatures are usually pleasant, with mild days and crisp, cool nights. Precipitation averages annually, and snowfall averages , most of which falls from mid-December to early March. Although not unheard of, extreme weather events like hurricanes and tornadoes occur infrequently in Springfield compared with other areas in the country. On the occasions that hurricanes have hit New England, Springfield's inland, upriver location has caused its damages to be considerably less than shoreline cities like New Haven, Connecticut and Providence, Rhode Island. On June 1, 2011, Springfield was directly struck by the second-largest tornado ever to hit Massachusetts. With wind speeds exceeding , the tornado left three dead, hundreds injured, and over 500 homeless in the city alone. The tornado caused hundreds of millions of dollars worth of damage to Springfield and destroyed nearly everything in a path from Westfield to Charlton, Massachusetts. It was the first deadly tornado to strike Massachusetts since May 29, 1995.