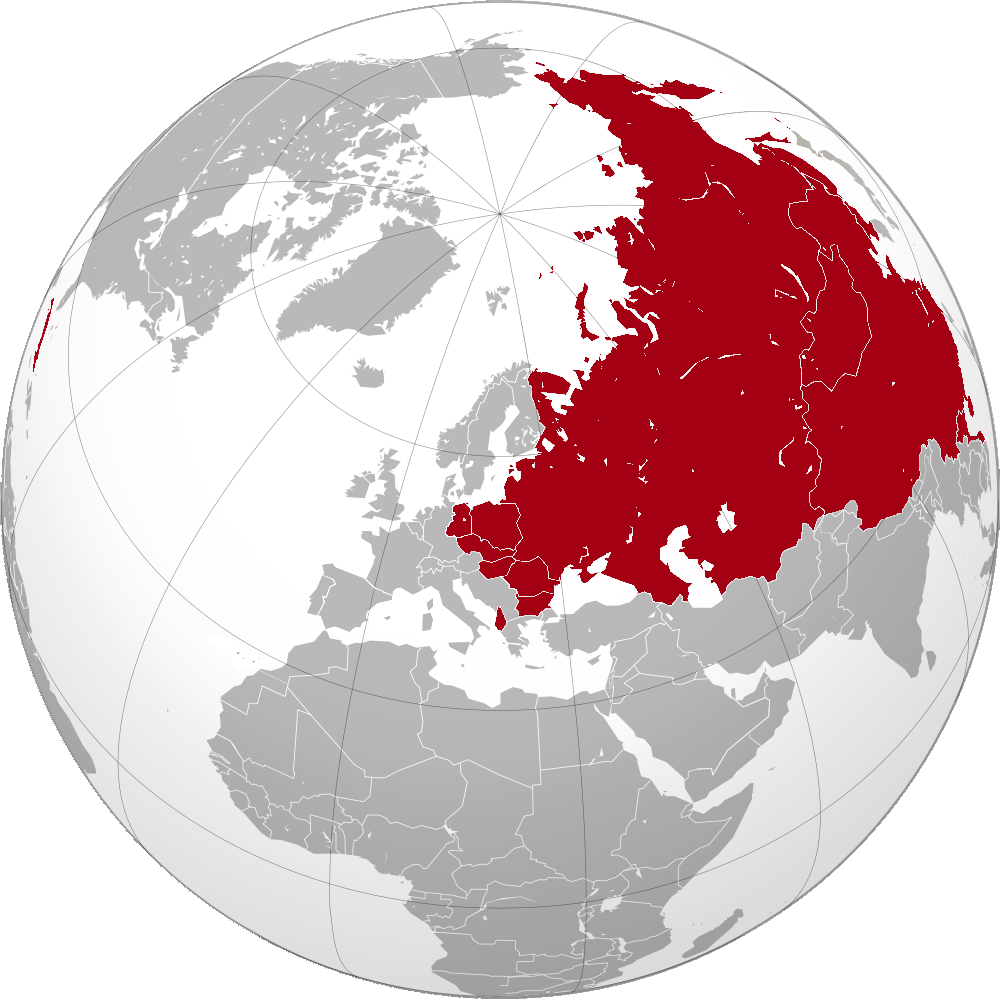 Soviet Empire expresses a political term used in Sovietology to describe the actions and nature of the Soviet Union, as a state, similar to those of a colonial empire. In the wider sense, the term refers to the country's geopolitical imperialist foreign policy during the Cold War: the nations which were part of the Soviet Empire were officially independent countries with separate governments that set their own policies, but those policies had to remain within certain limits decided by the Soviet Union and enforced by threat of intervention by the Soviet forces, and then the Warsaw Pact, which in fact happened in East Germany in 1953, Hungary in 1956, Czechoslovakia in 1968, Poland in 1980 and in the Soviet–Afghan War (1979–1989). Countries in this situation are often called satellite states. Similarly, the post-Soviet states and countries formerly allied with the Soviet Union continue to improve relations. The term "New Russian Empire" is sometimes used since Vladimir Putin took office in 2000 and to describe his aggressive foreign policy in the 2008 Russo-Georgian War, in the illegal annexation of Crimea by the Russian Federation in 2014 and in the ongoing Russo-Ukrainian War.

Although the Soviet Union was not ruled by an emperor and declared itself anti-imperialist and a people's democracy, it is argued that it exhibited tendencies common to historic empires. The onset of this studies is traditionally attributed to Richard Pipes's book ''The Formation of the Soviet Union'' (1954). Several scholars hold that the Soviet Union was a hybrid entity containing elements common to both multinational empires and nation states. It has also been argued that the Soviet Union practiced colonialism as did other imperial powers. The Soviets pursued internal colonialism in Central Asia, one example being that the state's privileging of grain production over livestock production in Kyrgyzstan favored Slavic settlers over Kyrgyz natives, perpetuating the inequalities of the tsarist colonial era. Maoists argued that the Soviet Union had itself become an imperialist power while maintaining a socialist façade, or social imperialism. Another dimension of "Soviet imperialism" is cultural imperialism. The policy of Soviet cultural imperialism implied the Sovietization of culture and education at the expense of local traditions. Leonid Brezhnev continued a policy of cultural Russification as part of Developed Socialism which sought to assert more central control. Seweryn Bialer argued that the Soviet state had an imperial nationalism. Joseph Stalin ordered population transfers in the Soviet Union, the deportation of people, often entire nationalities, from the 1930s through 1950s with destinations being underpopulated remote areas. The policy officially ended in the Khrushchev era, with many of the nationalities allowed to return in 1957. However, Nikita Khrushchev and Leonid Brezhnev refused the right of return for Crimean Tatars, Russian Germans and Meskhetian Turks. In 1991, the Supreme Soviet of Russia declared the Stalinist mass deportations to be "policy of defamation and genocide". The history of relationship between Russia (the Soviet dominant republic) and these Eastern European countries helps to understand the reactions of the Eastern European countries to the remnants of Soviet culture, namely hatred and longing for eradication. Poland and the Baltic states epitomize the Soviet attempt at the uniformization of their cultures and political systems. According to Dag Noren, Russia was seeking to constitute and reinforce a buffer zone between itself and Western Europe so as to protect itself from potential future attacks from hostile Western European countries. It is important to remember that the 15 socialistic republics in the USSR lost between 26 and 27 million lives over the course the Second World War. To this end, the Soviet Union believed they needed to expand their influences so as to establish a hierarchy of dependence between targeted states and itself. Such a purpose was thought to be achieved by the means of establishing economic cronyism. The penetration of the Soviet influence into the "socialist-leaning countries" was also of the political and ideological kind as rather than getting hold on their economic riches, the Soviet Union pumped enormous amounts of "international assistance" into them in order to secure influence, eventually to the detriment of its own economy. The political influence they sought to pursue aimed at rallying the targeted countries to their cause in the case of another attack from Western countries and later as a support in the context of the Cold War. After the dissolution of the Soviet Union, Russia declared itself successor and recognized $103 billion of Soviet foreign debt while claiming $140 billion of Soviet assets abroad. This does not mean that economic expansion did not play a significant role in the Soviet motivation to spread influence in these satellite territories. In fact, these new territories would ensure an increase in the global wealth which the Soviet Union would have a grasp on. If we follow the theoretical communist ideology, this expansion would hypothetically contribute to a higher portion for every Soviet citizen through the process of redistribution of wealth. Soviet officials from the Russian Soviet Federative Socialist Republic intertwined this economic opportunity with a potential for migration. In fact, they saw in these Eastern European countries the potential of a great workforce. They offered a welcome to them upon the only condition that they work hard and achieve social success. This ideology was shaped on the model of the meritocratic, 19th-century American foreign policy.


Allies of the Soviet Union


Other Marxist–Leninist states allies with the Soviet Union

After the Cold War ended the following countries in the Commonwealth of Independent States (CIS) and the Collective Security Treaty Organization (CSTO) that have maintained close relations with the Russian Federation: * * * * (1993–2004) * * * * * * * Within the former Soviet republics, there are partially recognized states fully or partially supported by Russia: * * * * * *

The position of Finland was complex. In World War II, Finland, after having signed the Moscow Peace Treaty in 1940, decided nevertheless to attack the Soviet Union as an ally of Nazi Germany in 1941, in what is known in Finland as the Continuation War. At the end of the war, Finland still remained in control of most of its territory, notwithstanding their status as losing powers. Finland also had a market economy, traded on the Western markets and joined the Western currency system. Nevertheless, although Finland was considered neutral, the Finno-Soviet Treaty of 1948 significantly limited the freedom of operation in Finnish foreign policy. It required Finland to defend the Soviet Union from attacks through its territory, which in practice prevented Finland from joining NATO and effectively gave the Soviet Union a veto in Finnish foreign policy. Thus, the Soviet Union could exercise "imperial" hegemonic power even towards a neutral state. The Paasikivi–Kekkonen doctrine sought to maintain friendly relations with the Soviet Union and extensive bilateral trade developed. In the West, this led to fears of the spread of "Finlandization", where Western allies would no longer reliably support the United States and NATO.

The process of decommunization and de-Sovietization started soon after dissolution of the Soviet Union in early 1990s by the President of Ukraine Leonid Kravchuk, a former high-rank party official. After an early presidential election in 1994 that made a former "red director" Leonid Kuchma the President of Ukraine, the process came to near complete halt. In April 2015, a formal decommunization process started in Ukraine after laws were approved which outlawed communist symbols, among other things. On 15 May 2015, President Petro Poroshenko signed a set of laws that started a six-month period for the removal of communist monuments (excluding World War II monuments) and renaming of public places named after communist-related themes. At the time, this meant that 22 cities and 44 villages were set to get a new name. Until 21 November 2015, municipal governments had the authority to implement this; if they failed to do so, the provincial authorities had until 21 May 2016 to change the names. If after that date the settlement had retained its old name, the Cabinet of Ministers of Ukraine would wield authority to assign a new name to the settlement. In 2016, 51,493 streets and 987 cities and villages were renamed, and 1,320 Lenin monuments and 1,069 monuments to other communist figures removed. Ukraine was also one of the most heavily influenced countries by the Soviet government and to this day by Russian active measures, which have been opposed by multiple popular movements. Enormous scale and legacies of Soviet/Russian covert state action persist in Ukraine, with significant continuity past and present. Former Ukrainian President Viktor Yanukovych, in exile in Russia, was found guilty of treason against Ukraine by a Ukrainian court, for his attempts to crush the 2014 pro-western demonstrations, and for his asking Vladimir Putin to invade Ukraine. In 2014, Russia annexed Crimea and intervened in Ukraine to support the unrecognized separatist Donetsk and Luhansk People's Republics. Andrew Roth describes this as "the most troubling years for Ukraine since the fall of the Soviet Union." During the peace process, Ukrainian President Volodymyr Zelensky has been criticised of actions occasionally characterised as concessions to Russia. He agreed with the German-suggested 'Steinmeier formula' which proposes autonomy in Donetsk and Luhansk oblasts if they undergo free and fair elections by the Ukrainian constitution. Zelensky faced criticism for the move, with predecessor Poroshenko labelling it "Putin's formula", and protesters threatening to set up barricades if the head of state made concessions to Putin. However, Zelensky said the elections would not happen "at gun point.". Zelensky clarified in an interview with TIME. "When we talk about elections, we have to understand the third point: before elections, we need a full withdrawal, a full disarming of all illegal formations, military formations, no matter the type, no matter the group, no matter the uniform, no matter what weapons," referring to Russia's unmarked troops.

Since 1989, Poland has taken down hundreds of Soviet monuments due to the negative reputation the Soviet Union has in Poland. Although many Poles see the memorials as justified in honouring those who died fighting against Nazi Germany, others seek the removal of Soviet memorials because of the decades of totalitarianism that resulted from Soviet occupation, and also because of the 1939 Nazi-Soviet pact and the Katyn massacre. Historian Lukasz Kaminski of the Institute of National Remembrance said, "Memorials in city centers and villages can send the wrong historical signal... What do you think we got, when the Soviets liberated Poland from Hitler, if not a new yoke?" In the 2010s, Poland continued in demolishing remaining Soviet monuments, some of which have been relocated to museums. The removals have sparked fervent controversy with Russian Foreign Minister Sergey Lavrov, who has lashed out at Warsaw officials for opposition to the monuments, as has Maria Zakharova, spokesperson for the Russian foreign ministry. On the other hand, Poland is seeking to eliminate all materialistic reminders of a persisting Soviet dominance as there have historically been many wars against the Russian Empire in the latter's efforts to invade Polish territory as well.

In April 2020, a statue of Soviet Marshal Ivan Konev was removed from Prague, which prompted criminal investigation by Russian authorities who considered it as an insult. Mayor of Prague's sixth municipal district Ondřej Kolář announced on Prima televize that he would be under police protection after a Russian man made attempts on his life. Prime Minister Andrej Babiš condemned that as foreign interference, while Kremlin Press Secretary Dmitry Peskov dismissed allegations of Russian involvement as "another hoax".