Sauchiehall Street () is one of the main shopping streets in the city centre of Glasgow, Scotland, along with Buchanan Street and Argyle Street. Although commonly associated with the city centre, Sauchiehall Street is over in length. At its central west end is Charing Cross, followed by the Category-A listed crescents and terraces which lead up to Park Circus, finally meeting Argyle Street in the West End in front of Kelvingrove Park and the Kelvingrove Museum, where they merge to form Dumbarton Road, continuing through Partick. The two streets run parallel east to west through the city centre, before Argyle Street terminates as a continuous route after passing under the M8 motorway and exists in sections through Anderston (traffic continues onto the Clydeside Expressway), then restarts at Finnieston as a re-named continuation of St. Vincent Street running north-west to Kelvingrove. By contrast, Sauchiehall Street is continuous and fairly straight, and passes over the motorway at Charing Cross.

Sauchiehall is a corruption of the Scots ''sauchie hauch'', ''sauchie''; abounding in willows and ''hauch''; a low-lying meadow by the side of a river (compare Sausalito, California). ''Hauch'' is pronounced 'haw' in Scots and can be mistaken for the Scots ''haw'', pronounced the same, meaning hall.

Sauchiehall Street, c. 1910 At its height, from 1880 to the 1970s, Sauchiehall Street became one of the most famous streets in Glasgow, due to its panoply of entertainment venues and quality stores. The desire of wealthy merchants from 1800 onwards to own property on the outskirts of the city meant that Blythswood Hill and Garnethill started to be developed by William Harley of Bath Street fame, who also planned and developed Blythswood Square in the 1820s. As a consequence, the meandering country road from the cathedral to Partick through the willows, and between these hills, acquired the name of the Saughie-haugh road. After it was straightened and widened in the 1840s it was named Sauchiehall Street and attracted more villas, tenement housing from 1860s, shops and eventually offices. A few of the original villas remained as of 1896, and lastly the 1960s, according to the Ordnance Survey map of Central Glasgow. Over time, the street has been home to a number of notable buildings, by distinguished architects. This includes the Glasgow Empire Theatre which was opened in 1897 at 31–35 Sauchiehall Street. The theatre played host to big names such as Bob Hope, Frank Sinatra, Judy Garland, Dorothy Lamour, Jack Benny and Danny Kaye before it closed on 31 March 1963. The Royalty Theatre was also situated on Sauchiehall Street, opening in 1879 and showing operas, comedies and plays up until its lease ran out in 1913. Afterwards, during the First World War, it was purchased by the YMCA to become a hostel for soldiers and sailors. The building lived out the rest of its days after the war as the Lyric Theatre, before it was demolished in the late 1950s. By the 1900s the street contained noted picture houses, ballrooms, clubs, hotels, restaurants, art galleries and quality departmental stores, with numerous theatres in adjacent streets, including the Kings Theatre in Bath Street, Theatre Royal in Hope Street and the Pavilion Theatre, in Renfield Street, and Glasgow Art School in Renfew Street. Glasgow's first "skyscraper", the Art Deco style Beresford Hotel, was built further along Sauchiehall Street in 1938 for the Empire Exhibition, Scotland 1938. It later became offices for ICI and then a hall of residence for Strathclyde University before being converted into private apartments. Its "moderne" architecture was disliked when it was built and the original mustard-coloured stonework with red fins was rather unkindly described as ''"custard and rhubarb architecture"''. In 2014 Sauchiehall Street was the subject of the documentary TV series 'The Street'.

In January 2018, a £7.2million investment from Glasgow City Council to transform and regenerate part of central Sauchiehall Street began, creating a multifunctional service verge, two-way cycle lane, two lane carriageway along with plantation of trees, shrubs and free wireless internet through the street. The initial design plan was completed in 2015 with the project being part of th
Glasgow Avenues Project
which is aimed to invest approximately £115 million within the city between 2015-2021 and to create green and SMART infrastructure. The regenertation work was officially completed in 2019 September. 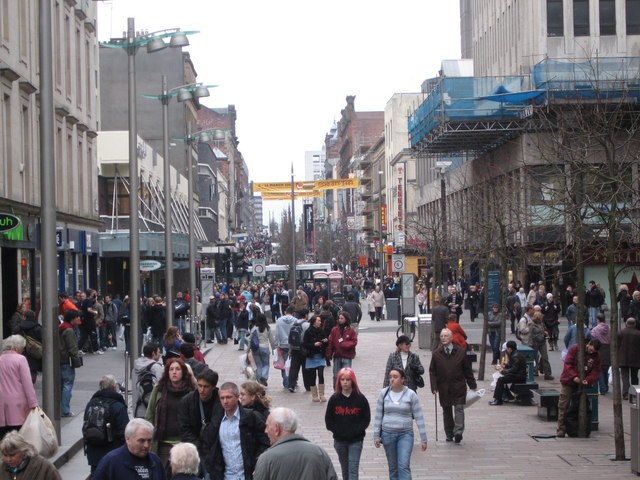 Sauchiehall Street formerly linked directly to Parliamentary Road at its eastern end, which continued through Townhead to the Glasgow Royal Infirmary. Today at the eastern end of Sauchiehall Street is the Glasgow Royal Concert Hall and Buchanan Galleries, one of the largest city centre redevelopments in the UK. The section from West Nile Street to Rose Street was originally pedestrianised in 1972, with the easternmost part, linking to Buchanan Street, pedestrianised in 1978. This part of the street consists primarily of typical High Street retailers, although it also includes the Willow Tearooms, designed in 1903 by Charles Rennie Mackintosh, which has been restored to its original artistic designs and is open to the public as a tea room, restaurant and McIntosh venue centre. Nearby in Renfrew Street is the Royal Conservatoire of Scotland.

At the western end of the city centre section of the street, towards Charing Cross, there is an abundance of restaurants, bars and student-oriented clubs, such as the ABC, a former cinema and the largest nightclub in Glasgow, The Garage. This is a very popular street in terms of Glasgow nightlife. Notable landmarks in this area of the street include the former Beresford Hotel, Glasgow School of Art, the Glasgow Film Theatre, CCA Glasgow, the McLellan Galleries, the Royal Highland Fusiliers Museum and the Glasgow Dental Hospital and School.