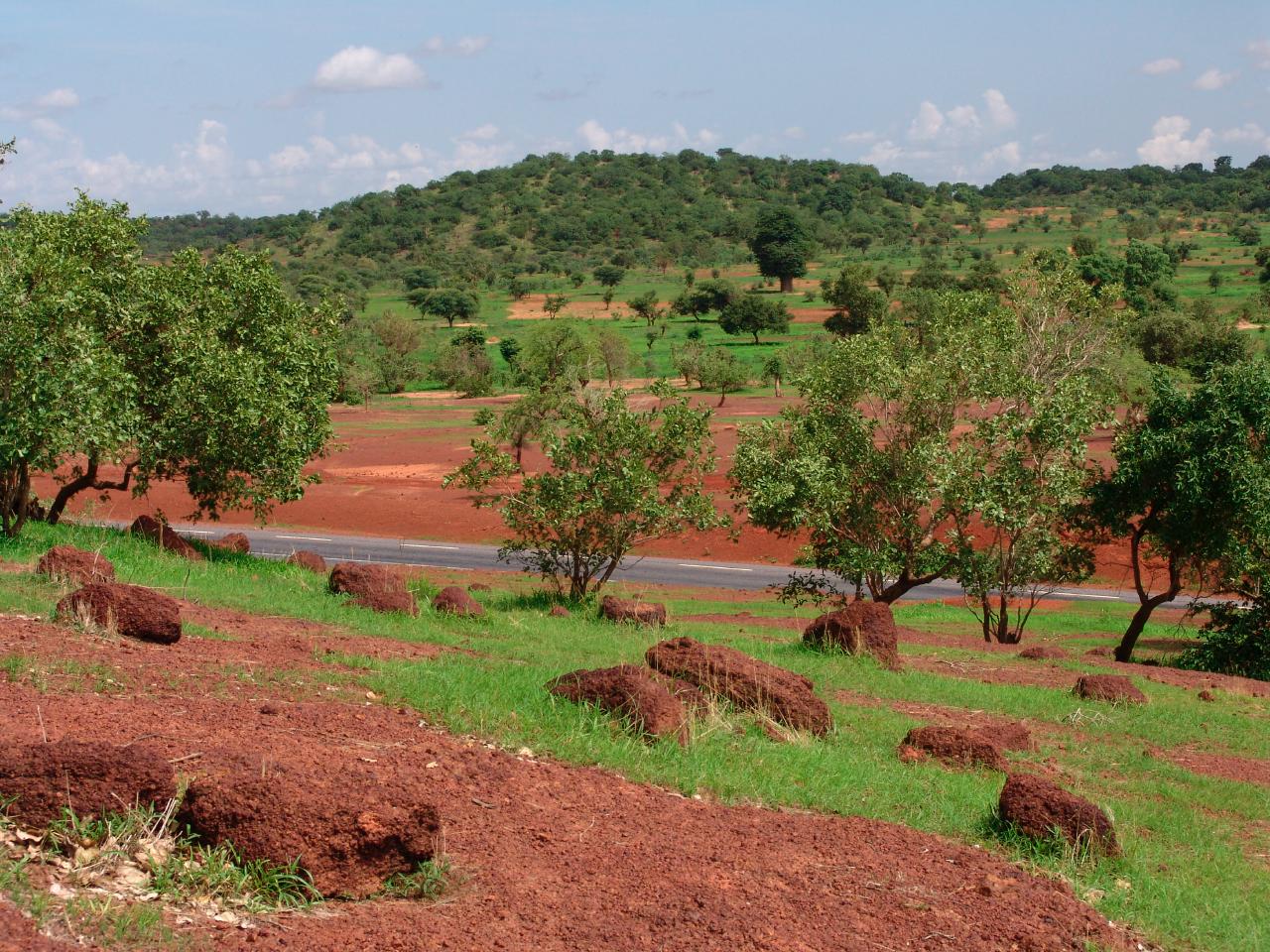 The Sahel spans from the in the west to the in the east, in a belt that varies from several hundred to a thousand kilometers (c. 600 miles) in width, covering an area of . It is a transitional of semi-arid grasslands, s, s, and thorn shrublands lying between the wooded to the south and the to the north. The topography of the Sahel is mainly flat; most of the region lies between in elevation. Several isolated plateaus and mountain ranges rise from the Sahel, but are designated as separate ecoregions because their flora and fauna are distinct from the surrounding lowlands. Annual rainfall varies from around in the north of the Sahel to around in the south.

The Sahel is mostly covered in grassland and savanna, with areas of woodland and shrubland. Grass cover is fairly continuous across the region, dominated by annual grass species such as '', gracilis'' and '' stipoides''. Species of are the dominant trees, with ' the most common, along with ' and '. Other tree species include ', ', ', and '. In the northern part of the Sahel, areas of desert shrub, including ' and ', alternate with areas of grassland and savanna. During the long dry season, many trees lose their leaves and the predominantly annual grasses die. The Sahel was formerly home to large populations of grazing mammals, including the ''(Oryx dammah)'', ''(Gazella dama)'', ''(Gazella dorcas)'', ''(Gazella rufifrons)'', the giant prehistoric buffalo ''()'' and ''(Alcelaphus busephalus buselaphus)'', along with large predators like the ''(Lycaon pictus)'', the ''(Acinonyx jubatus hecki)'', the ''(Acinonyx jubatus soemmeringii)'', the ''(Panthera leo)''. The larger species have been greatly reduced in number by over-hunting and competition with livestock, and several species are (Dorcas gazelle, cheetah, lion and red-fronted gazelle), ( and ), or (the Scimitar-horned oryx is probably , and both ' and the Bubal hartebeest are now extinct). The seasonal wetlands of the Sahel are important for s moving within Africa and on the .

The Sahel has a ( ''BSh''). The climate is typically hot, sunny, dry and somewhat windy all year long. The Sahel's climate is similar to, but less extreme than, the climate of the located just to the north. The Sahel mainly receives a low to very low amount of precipitation annually. The steppe has a very long, prevailing dry season and a short rainy season. The precipitation is also extremely irregular, and varies considerably from season to season. Most of the rain usually falls during four to six months in the middle of the year, while the other months may remain absolutely dry. The interior of the Sahel region generally receives between 200 mm and 700 mm of rain yearly. A system of subdivisions often adopted for the Sahelian climate based on annual rainfall is as follows: the Saharan-Sahelian climate, with mean annual precipitation between around 100 and 200 mm (such as , Sudan), the strict Sahelian climate, with mean annual precipitation between around 200 and 700 mm (such as , Niger) and the Sahelian-Sudanese climate, with mean annual precipitation between around 700 and 1,200 mm (such as , Mali). The in the steppe is low to very low, often between 10% and 25% during the dry season and between 25% and 75% during the rainy season. The least humid places have a relative humidity under 35%. The Sahel is characterized by constant, intense heat, with an unvarying temperature. The Sahel rarely experiences cold temperatures. During the hottest period, the average high temperatures are generally between (and even more in the hottest regions), often for more than three months, while the average low temperatures are around . During the "coldest period", the average high temperatures are between and the average low temperatures are between . Everywhere in the Sahel, the average mean temperature is over . The Sahel has a high to very high year-round, between 2,400 hours (about 55% of the daylight hours) and 3,600 hours (more than 80% of the daylight hours). The sunshine duration in the Sahel approaches desert levels, and is comparable to that in the , for example, even though the Sahel is only a steppe and not a desert. The is low to very low. For example, , Niger has 3,082 hours of bright sunshine; , Mali has near 3,385 hours of sunshine; , Mali has 3,409 sunny hours, and , Chad has 3,205 hours of sunlight.

Traditionally, most of the people in the Sahel have been semi-s, farming and raising livestock in a system of , which is probably the most sustainable way of utilizing the Sahel. The difference between the dry North with higher levels of soil nutrients and the wetter South with more vegetation, is utilized by having the herds graze on high-quality feed in the North during the wet season, and trek several hundred kilometers to the South to graze on more abundant, but less nutritious feed during the dry period. In Western Sahel, and are common. is also practiced across the Sahel.

The term "Sahel" is borrowed from the name for the region, '. ' literally means "coast, shore", which has been explained as a figurative reference to the southern edge of the vast Sahara. However, such use is unattested in , and it has been suggested that the word may originally have been derived from the Arabic word ' "plain" instead.

Around 4000 BC, the climate of the Sahara and the Sahel started to become drier at an exceedingly fast pace. This climate change caused lakes and rivers to shrink rather significantly and caused increasing . This, in turn, decreased the amount of land conducive to settlements and caused migrations of farming communities to the more humid climate of .

The Sahelian kingdoms were a series of monarchies centered in the Sahel between the 9th and 18th centuries. The wealth of the states came from controlling the routes across the desert, especially with the Islamic world. Their power came from having large pack animals like camels and horses that were fast enough to keep a large empire under central control and were also useful in battle. All of these empires were quite decentralized with member cities having a great deal of autonomy. The first large Sahelian kingdoms emerged after AD 750 and supported several large trading cities in the region, including , and . The Sahel states were hindered from expanding south into the forest zone of the north Akan state of and peoples as mounted warriors were all but useless in the forests and the horses and camels could not survive the heat and diseases of the region.

The Western Sahel fell to in the late 19th century as part of . was added in 1900 as part of . The French territories were in 1960. The Eastern Sahel (the part in what is now ) did not fall to the European powers but was annexed by in 1820. It came under as part of the in 1914. The Sudanese Sahel became part of independent in 1956, and in turn achieved its independence from Sudan proper in 2011.

For hundreds of years, the Sahel region has experienced regular droughts and s. One megadrought lasted from 1450 to 1700, 250 years. There was a major drought in the Sahel in 1914 caused by annual rains far below average, leading to large-scale famine. From 1951 to 2004, the Sahel experienced some of the most consistent and severe droughts in Africa. The 1960s saw a large increase in rainfall in the region, making the northern drier region more accessible. There was a push, supported by governments, for people to move northwards. When the long drought period from 1968 through 1974 began, grazing quickly became unsustainable and large-scale denuding of the terrain followed. Like the drought in 1914, this led to a large-scale famine, but this time somewhat tempered by international visibility and an outpouring of aid. This catastrophe led to the founding of the .

Between June and August 2010, famine struck the Sahel. Niger's crops failed to mature in the heat, 350,000 faced starvation, and 1,200,000 were at risk of famine. In Chad the temperature reached on 22 June in , breaking a record set in 1961 at the same location. Niger tied its highest temperature record set in 1998, also on 22 June, at 47.1 °C in . That record was broken the next day, when Bilma hit . The hottest temperature recorded in Sudan was reached on 25 June, at in , breaking a record set in 1987. Niger reported on 14 July that , starvation, , and had sickened or killed many children. The new appealed for international food aid and took serious steps to call on overseas help. On 26 July, the heat reached near-record levels over and , and in northern Niger about 20 people reportedly died of dehydration by 27 July.

The Sahel region faces environmental issues that are contributing to . If the change in climate in the Sahel region "is not slowed-down and desertification possibly reversed through sustainable practices and any form of , it is only a matter of time before" countries like Niger lose their entire landmass to desert due to unchecked unsustainable human practises. Over-farming, over-grazing, of marginal lands, and natural , have caused serious of the region. This has affected shelter construction, making it necessary to change the used materials. The Woodless Construction project was introduced in Sahel in 1980 by the Development Workshop, achieving since then a high social impact in the region. A major initiative to combat desertification in the Sahel region via reforestation and other interventions is the . Major s are a frequent occurrence as well. During November 2004, a number of major dust storms hit , originating in the . This is a common area for dust storms, occurring on average on 100 days every year. On 23 March 2010, a major sandstorm hit Mauritania, Senegal, , , , and inland . Another struck in southern , inland Mauritania, Mali and northern at the same time.

Terrorist organizations including and (AQIM) operating in the Sahel have contributed to the violence, extremism and instability of the region. In March 2020, the United States sent a special envoy for the Sahel region to combat the rising violence from terrorist groups. Envoy Peter Pham started his new role on 1 March 2020. He has been the U.S. Special Envoy for the Great Lakes Region of Africa since November 2018. The violent , , and other countries in the Sahel region have been exacerbated by climate change, , and . Droughts and food shortages have been also linked to the . On 9 July 2020, the raised concerns over growing number of allegations of human rights violations and abuses by state security forces in Sahel. The US response came after released documents regarding the same on 1 July.

Protected areas in the Sahel include in Senegal, in Burkina Faso, in Mali, in Niger, and in Cameroon.

* . *
The Growing Crisis in Africa’s Sahel Region: Joint Hearing before the Subcommittee on Africa, Global Health, Global Human Rights, and International Organizations and the Subcommittee on the Middle East and North Africa and the Subcommittee on Terrorism, Nonproliferation and Trade of the Committee in Foreign Affairs, House of Representatives, One Hundred Thirteenth Congress, First Session, May 21, 2013
* 2008. “Strengthening Livelihoods in Sahelian West Africa: The Geography of Development and Underdevelopment in a Peripheral Region.” Geographische Rundschau International Edition, 4(4): 44–50