The Corps of Royal Marines (RM) is an amphibious light infantry and also one of the five fighting arms of the Royal Navy. The marines can trace their origins back to the formation of the English Army's "Duke of York and Albany's maritime regiment of Foot" at the grounds of the Honourable Artillery Company on 28 October 1664. As a highly specialised and adaptable elite light infantry force, the Royal Marines are trained for rapid deployment worldwide and capable of dealing with a wide range of threats. The Royal Marines are organised into a light infantry brigade (3 Commando Brigade) and a number of separate units, including 47 Commando (Raiding Group) Royal Marines, and a company strength commitment to the Special Forces Support Group. The Corps operates in all environments and climates, though particular expertise and training is spent on amphibious warfare, arctic warfare, mountain warfare, expeditionary warfare, and its commitment to the UK's Rapid Reaction Forces. Throughout its history, the Royal Marines have seen action in a number of major wars often fighting beside the British Army – including the Seven Years' War, the Napoleonic Wars, the Crimean War, World War I and World War II. In recent times the Corps has been largely deployed in expeditionary warfare roles such as the Falklands War, the Gulf War, the Bosnian War, the Kosovo War, the Sierra Leone Civil War, the Iraq War and the War in Afghanistan. The Royal Marines have close international ties with allied marine forces, particularly the United States Marine Corps and the Netherlands Marine Corps ( nl|Korps Mariniers|links=no). Today, the Royal Marines are an elite fighting force within the British Armed Forces, having undergone many substantial changes over time.

The Royal Marines traces its origins back to 28 October 1664 when at the grounds of the Honourable Artillery Company "the Duke of York and Albany's maritime regiment of foot" was formed.

On 5 April 1755, ''His Majesty's Marine Forces'', fifty Companies in three Divisions, headquartered at Chatham, Portsmouth, and Plymouth, were formed by Order of Council under Admiralty control. Initially all field officers were Royal Navy officers as the Royal Navy felt that the ranks of Marine field officers were largely honorary. This meant that the furthest a Marine officer could advance was to lieutenant colonel. It was not until 1771 that the first Marine was promoted to colonel. This attitude persisted well into the 1800s. During the rest of the 18th century, they served in numerous landings all over the world, the most famous being the landing at Belle Île on the Brittany coast in 1761. They also served in the American War of Independence, notably in the Battle of Bunker Hill led by Major John Pitcairn. In 1788 a detachment of four companies of marines, under Major Robert Ross, accompanied the First Fleet to protect a new colony at Botany Bay (New South Wales). Due to an error the Fleet left Portsmouth without its main supply of ammunition, and were not resupplied until the Fleet docked in Rio de Janeiro midway through the voyage. Scholars such as Christopher Warren and Seth Carus argue that the Marines deliberately spread smallpox among Australia's indigenous population in order to protect the settlement and respond to an overwhelming strategic threat. This incident does not appear in contemporaneous Marine or government records. Major Ross lost his papers during the shipwreck of . Some researchers associate the indigenous smallpox outbreak with other causes. 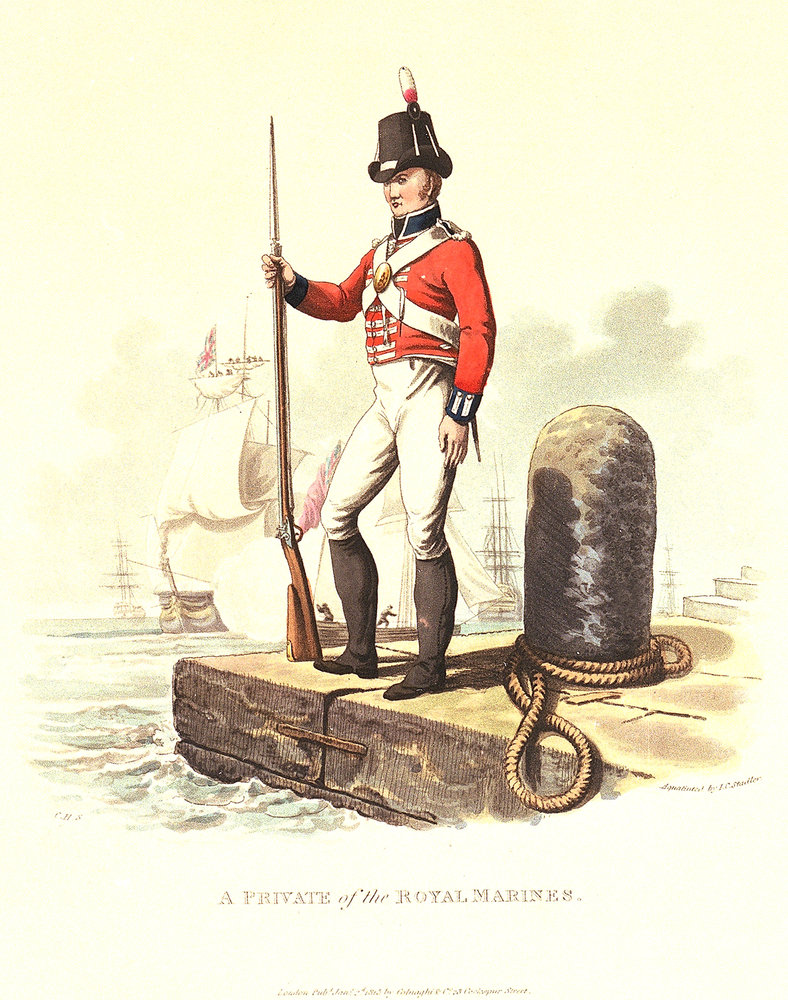 In 1802, largely at the instigation of Admiral the Earl St Vincent, they were titled the ''Royal Marines'' by King George III. The ''Royal Marines Artillery'' (RMA) was formed as a separate unit in 1804 to man the artillery in bomb ketches. These had been manned by the Army's Royal Regiment of Artillery, but a lawsuit by a Royal Artillery officer resulted in a court decision that Army officers were not subject to Naval orders. As RMA uniforms were the blue of the Royal Regiment of Artillery they were nicknamed the "Blue Marines" and the infantry element, who wore the scarlet uniforms of the British infantry, became known as the "Red Marines", often given the semi-derogatory nickname "Lobsters" by sailors. A fourth division of the Royal Marines, headquartered at Woolwich, was formed in 1805. During the Napoleonic Wars the Royal Marines participated in every notable naval battle on board the Royal Navy's ships and also took part in multiple amphibious actions. Marines had a dual function aboard ships of the Royal Navy in this period; routinely, they ensured the security of the ship's officers and supported their maintenance of discipline in the ship's crew, and in battle, they engaged the enemy's crews, whether firing from positions on their own ship, or fighting in boarding actions. In the Caribbean theatre volunteers from freed French slaves on Marie-Galante were used to form Sir Alexander Cochrane's first Corps of Colonial Marines. These men bolstered the ranks, helping the British to hold the island until reinforcements arrived. This practice was repeated during the War of 1812, where escaped American slaves were formed into Cochrane's second Corps of Colonial Marines. These men were commanded by Royal Marines officers and fought alongside their regular Royal Marines counterparts at the Battle of Bladensburg. Throughout the war Royal Marines units raided up and down the east coast of America including up the Penobscot River and in the Chesapeake Bay. They fought in the Battle of New Orleans and later helped capture Fort Bowyer in Mobile Bay in what was the last action of the war. 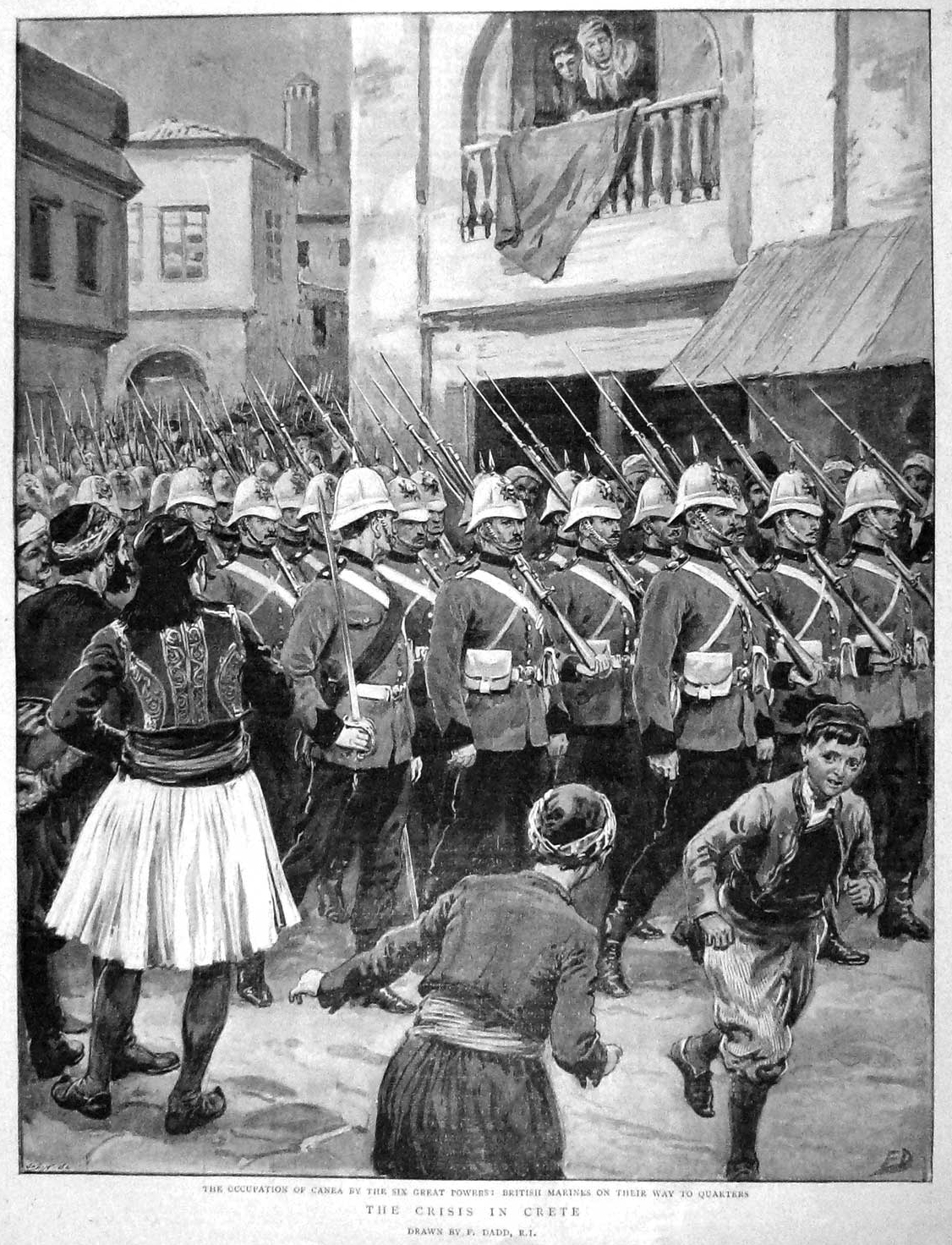 In 1855 the infantry forces were renamed the ''Royal Marines Light Infantry'' (RMLI). During the Crimean War in 1854 and 1855, three Royal Marines earned the Victoria Cross, two in the Crimea and one in the Baltic. In 1862 the name was slightly altered to ''Royal Marine Light Infantry''. The Royal Navy did not fight any other ships after 1850 and became interested in landings by Naval Brigades. In these Naval Brigades, the function of the Royal Marines was to land first and act as skirmishers ahead of the sailor infantry and artillery. This skirmishing was the traditional function of light infantry. For most of their history, British Marines had been organised as fusiliers. In the rest of the 19th Century the Royal Marines served in many landings especially in the First and Second Opium Wars (1839–1842 and 1856–1860) against the Chinese. These were all successful except for the landing at the Mouth of the Peiho in 1859, where Admiral Sir James Hope ordered a landing across extensive mud flats. The Royal Marines also played a prominent role in the Boxer Rebellion in China (1900), where a Royal Marine earned a Victoria Cross.