The Canadian Air Force (CAF) was established in 1920 as the successor to a short-lived two-squadron Canadian Air Force that was formed during the First World War in Europe. Wing Commander John Scott Williams was tasked in 1921 with organizing the CAF, handing command over later the same year to Air Marshal Lindsay Gordon. The new Canadian Air Force was a branch of the Air Board and was chiefly a training militia that provided refresher training to veteran pilots. Many CAF members also worked with the Air Board's Civil Operations Branch on operations that included forestry, surveying and anti-smuggling patrols. In 1923, the CAF became responsible for all flying operations in Canada, including civil aviation. In 1924, the Canadian Air Force, was granted the royal title, becoming the Royal Canadian Air Force (RCAF). Most of its work was civil in nature; however, in the late 1920s the RCAF evolved into more of a military organization. After budget cuts in the early 1930s, the air force began to rebuild. 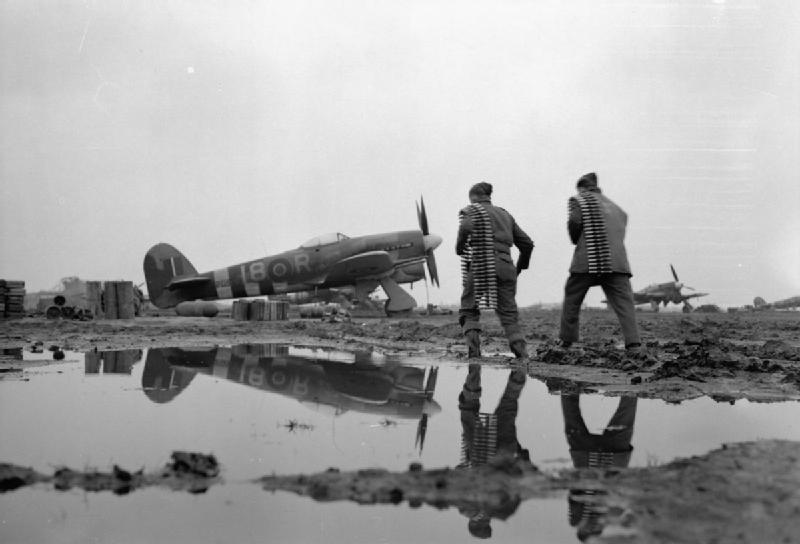 During the Second World War, the RCAF was a major contributor to the British Commonwealth Air Training Plan and was involved in operations in Great Britain, Europe, the north Atlantic, North Africa, southern Asia, and with home defence. By the end of the war, the RCAF had become the fourth largest allied air force. During WWII the Royal Canadian Air Force was headquartered in 20-23 Lincolns Inn Fields, London. A commemorative plaque can be found on the outside of the building.

After the war, the RCAF reduced its strength. Because of the rising Soviet threat to the security of Europe, Canada joined NATO in 1949, and the RCAF established No. 1 Air Division RCAF consisting of four wings with three fighter squadrons each, based in France and West Germany. In 1950, the RCAF became involved with the transport of troops and supplies to the Korean War; however, it did not provide RCAF combat units. Members of the RCAF served in USAF units as exchange officers and several flew in combat. Both auxiliary and regular air defence squadrons were run by Air Defence Command. At the same time, the Pinetree Line, the Mid-Canada Line and the DEW Line radar stations, largely operated by the RCAF, were built across Canada because of the growing Soviet nuclear threat. In 1957, Canada and the United States created the joint North American Air Defense Command (NORAD). Coastal defence and peacekeeping also became priorities during the 1950s and 1960s. 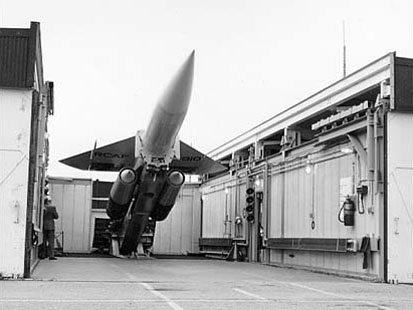 On 9 November 1984, Canada Post issued "Air Force" as part of the Canadian Forces series. The stamps were designed by Ralph Tibbles, based on an illustration by William Southern. The 32¢ stamps are perforated 12 x 12.5 and were printed by Ashton-Potter Limited. In the early 1990s, Canada provided a detachment of CF-18 Hornets for the air defence mission in Operation Desert Shield. The force performed combat air patrols over operations in Kuwait and Iraq, undertook a number of air-to-ground bombing missions, and, on one occasion, attacked an Iraqi patrol boat in the Persian Gulf. In the late 1990s, Air Command's CF-18 Hornets took part in the Operation Allied Force in Yugoslavia, and in the 2000s, AIRCOM was heavily involved in the Afghanistan War, transporting troops and assets to Kandahar. Later in the decade-long war, AIRCOM set up a purpose-specific air wing, Joint Task Force Afghanistan Air Wing, equipped with several CH-146 Griffon and CH-147 Chinook helicopters, CC-130 Hercules, CU-161 Sperwer and leased CU-170 Heron UAVs in support of the Canadian Forces and ISAF mission. The wing stood down on 18 August 2011. From 18 March to 1 November 2011, the RCAF was engaged in Operation Mobile, Canada's contribution to Operation Unified Protector in Libya. Seven CF-18 Hornet fighter aircraft and several other aircraft served under Task Force Libeccio as part of the military intervention.

On 16 August 2011, the Government of Canada announced that the name "Air Command" was being changed to the air force's original historic name: Royal Canadian Air Force (along with the change of name of Maritime Command to Royal Canadian Navy and Land Force Command to Canadian Army). The change was made to better reflect Canada's military heritage and align Canada with other key Commonwealth countries whose military units use the royal designation. The RCAF adopted a new badge in 2013, which is similar to the pre-unification RCAF badge (although placed in the modern frame used for command badges). The Latin motto of Air Command – ''Sic itur ad astra'' – which was the motto of the Canadian Air Force when first formed after the First World War (before it became the Royal Canadian Air Force in 1924) was retained. Though traditional insignia for the RCAF was restored in 2015, there has been no restoration of the traditional uniforms or rank structure of the historical service (apart from a rank of "Aviator", which replaced that of "Private" in 2015). On 17 April 2014, Prime Minister Stephen Harper announced that Canada was dispatching six CF-18s and military personnel to assist NATO in operations in Eastern Europe.

;Boeing CC-177 Globemaster III :Five strategic airlifters operated by 429 (T) Squadron based at 8 Wing Trenton, Ontario. Four were delivered from 2007 to 2008, a fifth was delivered in 2015. ;Bombardier CC-144 Challenger :Utility and VIP transport aircraft first delivered in 1982. Early Challenger 600 and 601 models were supplemented by 604 models in 2002. Four aircraft are operated by 412(T) Sqn and based in Ottawa, but belong to 8 Wing Trenton. ;Canadair CT-114 Tutor :Entered service in 1962 as a basic and advanced jet trainer with 190 originally ordered, replaced by the CT-156 Harvard II and CT-155 Hawk in 2000. A total of 26 aircraft remain in service, 24 of which are used by 431 Air Demonstration Squadron, "The Snowbirds". ;DHC CC-115 Buffalo :A Twin-engined utility/cargo transport now used for search and rescue. Six are operated by 442 Transport and Rescue Sqn. at 19 Wing Comox, British Columbia. ;DHC CC-138 Twin Otter :A twin-engined utility transport operated since the 1970s, four remain based at Yellowknife, Northwest Territories, operated by 440 Transport Squadron. ;DHC CT-142 Dash 8 :Twin-engined converted regional airliner entered service in 1987 as an aerial navigation and tactics trainer, Four are operated by 402 "City of Winnipeg" Sqn and stationed at 17 Wing, Winnipeg, Manitoba. ;Grob G 120A :Single engine primary trainer used to train pilot candidates before they move onto the Harvard II. Leased to RCAF by KF Defence Programs, 14 aircraft are based at 3 Canadian Forces Flying Training School in Portage la Prairie, Manitoba.

;McDonnell Douglas CF-18 Hornet :Fighter entered service in 1982 when 98 single-seat CF-18As and 40 two-seat CF-18Bs were ordered. Seventeen have been lost since 1984. Stationed at 3 Wing Bagotville, Quebec and 4 Wing Cold Lake, Alberta; 60 CF-18As and 25 CF-18Bs remain in active service. ;McDonnell Douglas F/A-18 Hornet (Ex-RAAF) : 15 of the 18 have been delivered. Three are now flying with the Air Force while the remainder are still going through upgrades and changes to make them compatible with Canada’s needs.

;Bell CH-146 Griffon :A utility transport tactical helicopter (UTTH) that entered service between 1995 and 1997. Original purchase of 100 aircraft to replace the CH-136 Kiowa (Bell 206), CH-135 Twin Huey (Bell 212), CH-118 Iroquois (Bell 205), and Boeing C-Model Chinooks CH-47C. Based at Bagotville, Quebec (439 Squadron), St. Hubert, Quebec (438 Squadron), Cold Lake, Alberta (417 Squadron), Gagetown, New Brunswick (403 Squadron), Valcartier, Quebec (430 Squadron), Goose Bay, Newfoundland (444 Squadron), Edmonton, Alberta (408 Squadron), and Borden, Ontario (400 Squadron); also perform search and rescue duties at 8 Wing Trenton (424 Squadron). Deployed to Afghanistan to provide escorts for the Chinooks, armed with a combination of 7.62mm C-6 machine gun, 7.62mm Dillon Aero M134D Gatling gun, and GAU-21 .50 caliber machine gun on one or both doors. 9 ex-RCAF Griffons, designated CT-146, are leased from Allied Wings for pilot training at Portage la Prairie, Manitoba. ;Boeing CH-147F Chinook :The CH-147F Chinook is an advanced, multi-mission, medium to heavy-lift helicopter. Its primary mission is the tactical transport of equipment and personnel during domestic or deployed operations. 450 Tactical Helicopter Squadron, under the command of 1 Wing Kingston, Ontario, and based in CFB Petawawa, Ontario, was re-established as the home of Canadaʼs fleet of 15 CH-147F Chinooks. The first two airframes underwent intensive operational test and evaluation in the United States for several months before Canada received the first airframe 147303 at an official acceptance ceremony at the Ottawa International Airport on 27 June 2013. 15 aircraft are in service as of 2017. ;Sikorsky CH-148 Cyclone :Ship-based transport/anti-submarine helicopter based on the Sikorsky H-92 Superhawk. Twenty-eight ordered to replace the Sea King from 2009. Delays pushed first delivery to 2015. One aircraft was lost in an accident in April 2020.

The Canadian Forces have leased aircraft from vendors to help transport troops and equipment from Canada and other locations in the past decade. Transport aircraft have been leased as required. ;Beechcraft B300 Super King Air * Two aircraft leased from Transwest Air Limited. Used by the Multi-Engine Utility Flight (MEUF) in CFB Trenton. Flown by RCAF pilots, they are used for light transport of personnel and equipment within North America. ;Dornier Alpha Jet Type A * Twelve civil aircraft are operated by Discovery Air Defence Services for CATS (Contracted Airborne Training Services) and are based at CFB Cold Lake and CFB Bagotville ;Hawker Hunter F.58 * Twelve civil aircraft are operated by Lortie Aviation, formerly Northern Lights International Airlines Ltd.. Based in CFB Cold Lake; ex-Swiss Air Force jets

Weapons and other equipment

The commander of the Royal Canadian Air Force, located at National Defence Headquarters in Ottawa, commands and provides strategic direction to the Air Force. The commander of 1 Canadian Air Division and Canadian NORAD Region, based in Winnipeg, is responsible for the operational command and control of Royal Canadian Air Force activities throughout Canada and worldwide. The RCAF's other Air Division, 2 Canadian Air Division, was established in June 2009, and consists of training establishments. There are 13 wings across Canada, 11 operational and 2 used for training. Wings represent the grouping of various squadrons, both operational and support, under a single tactical commander reporting to the operational commander. Ten wings also include a Canadian Forces base along with other operational and support units. The rank of general is held when an air officer is serving as chief of the Defence Staff. The commander of the Royal Canadian Air Force holds the rank of lieutenant-general. Divisions are commanded by major-generals. Brigadier-generals are typically second-in-command of a division. Wings are commanded by colonels. Squadrons are commanded by lieutenant-colonels. Majors are typically second-in-command of squadrons, or flight commanders. Captains, lieutenants and second lieutenants are the junior level leaders in RCAF squadrons and headquarters.

On 1 April 2015, the rank structure and insignia changed. The rank of private was replaced with that of aviator. The previously used term "leading aircraftman" was considered not to be gender neutral. Insignia were also changed from golden yellow to a pearl-grey colour similar to that worn before unification of Canada's armed forces in 1968. A revival of the former rank titles of the RCAF did not occur, however, as such an extensive change was considered "too complicated and confusing". Instead, the current rank titles were retained (with the exception of aviator). The Royal Flying Corps, considered to be a predecessor of the RCAF, used rank titles similar to the existing rank titles of the RCAF.

The badge of the Royal Canadian Air Force consists of: * St. Edward's Crown * An eagle superimposed on a circlet * A compartment of maple leaves * Motto: ''Sic Itur Ad Astra'' (Latin for "Such is the pathway to the stars")

Roundels used from 1920 until 1945 were usually the same as Royal Air Force roundels although not all variations were used and colours were matched to locally available paints.