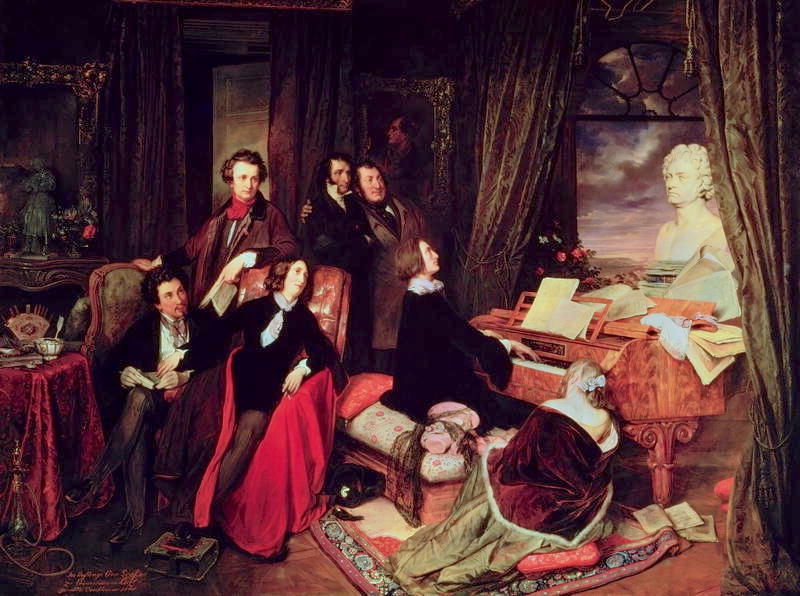 The Romantic movement was an artistic, literary, and intellectual movement that originated in the second half of the 18th century in Europe and strengthened in reaction to the Industrial Revolution . In part, it was a revolt against social and political norms of the Age of Enlightenment and a reaction against the scientific rationalization of nature . It was embodied most strongly in the visual arts, music, and literature, but had a major impact on historiography and education , and was in turn influenced by developments in natural history . One of the first significant applications of the term to music was in 1789, in the ''Mémoires'' by the Frenchman André Grétry, but it was E. T. A. Hoffmann who really established the principles of musical romanticism, in a lengthy review of Ludwig van Beethoven's Fifth Symphony published in 1810, and in an 1813 article on Beethoven's instrumental music. In the first of these essays Hoffmann traced the beginnings of musical Romanticism to the later works of Haydn and Mozart. It was Hoffmann's fusion of ideas already associated with the term "Romantic", used in opposition to the restraint and formality of Classical models, that elevated music, and especially instrumental music, to a position of pre-eminence in Romanticism as the art most suited to the expression of emotions. It was also through the writings of Hoffmann and other German authors that German music was brought to the centre of musical Romanticism .

Characteristics often attributed to Romanticism: * a new preoccupation with and surrender to Nature; * a fascination with the past, particularly the Middle Ages and legends of medieval chivalry; * a turn towards the mystic and supernatural, both religious and merely spooky; * a longing for the infinite; * mysterious connotations of remoteness, the unusual and fabulous, the strange and surprising; * a focus on the nocturnal, the ghostly, the frightful, and terrifying; * fantastic seeing and spiritual experiences; * a new attention given to national identity; * emphasis on extreme subjectivism; * interest in the autobiographical; * discontent with musical formulas and conventions. Such lists, however, proliferated over time, resulting in a "chaos of antithetical phenomena", criticized for their superficiality and for signifying so many different things that there came to be no central meaning. The attributes have also been criticized for being too vague. For example, features of the "ghostly and supernatural" could apply equally to Mozart's ''Don Giovanni'' from 1787 and Stravinsky's ''The Rake's Progress'' from 1951 . In music there is a relatively clear dividing line in musical structure and form following the death of Beethoven. Whether one counts Beethoven as a "romantic" composer or not, the breadth and power of his work gave rise to a feeling that the classical sonata form and, indeed, the structure of the symphony, sonata and string quartet had been exhausted. Schumann, Schubert, Berlioz and other early-Romantic composers tended to look in alternative directions. Some characteristics of Romantic music include: * The use of new or previously not so common musical structures like the song cycle, nocturne, concert etude, arabesque and rhapsody, alongside the traditional classical genres. Program music became somewhat more common; * A harmonic structure based on movement from tonic to subdominant or alternative keys rather than the traditional dominant, and use of more elaborate harmonic progressions (Wagner and Liszt are known for their experimental progressions); * A greater emphasis on melody to sustain musical interest. The classical period often used short, even fragmentary, thematic material while the Romantic period tended to make greater use of longer, more fully defined and more satisfying themes; * The use of a wider range of dynamics, for example from to , supported by large orchestration; * A greater tonal range (exp. using the lowest and highest notes of the piano).

Trends of the 19th century

Events and changes in society such as ideas, attitudes, discoveries, inventions, and historical events often affect music. For example, the Industrial Revolution was in full effect by the late 18th century and early 19th century. This event had a profound effect on music: there were major improvements in the mechanical valves and keys that most woodwinds and brass instruments depend on. The new and innovative instruments could be played with greater ease and they were more reliable . Another development that had an effect on music was the rise of the middle class. Composers before this period lived on the patronage of the aristocracy. Many times their audience was small, composed mostly of the upper class and individuals who were knowledgeable about music . The Romantic composers, on the other hand, often wrote for public concerts and festivals, with large audiences of paying customers, who had not necessarily had any music lessons . Composers of the Romantic Era, like Elgar, showed the world that there should be "no segregation of musical tastes" and that the "purpose was to write music that was to be heard" .

During the Romantic period, music often took on a much more nationalistic purpose. For example, Jean Sibelius' ''Finlandia'' has been interpreted to represent the rising nation of Finland, which would someday gain independence from Russian control . Frédéric Chopin was one of the first composers to incorporate nationalistic elements into his compositions. Joseph Machlis states, "Poland's struggle for freedom from tsarist rule aroused the national poet in Poland. … Examples of musical nationalism abound in the output of the romantic era. The folk idiom is prominent in the Mazurkas of Chopin" . His mazurkas and polonaises are particularly notable for their use of nationalistic rhythms. Moreover, "During World War II the Nazis forbade the playing of … Chopin's Polonaises in Warsaw because of the powerful symbolism residing in these works" . Other composers, such as Bedřich Smetana, wrote pieces that musically described their homelands; in particular, Smetana's ''Vltava'' is a symphonic poem about the Moldau River in the modern-day Czech Republic and the second in a cycle of six nationalistic symphonic poems collectively titled ''Má vlast'' (My Homeland) . Smetana also composed eight nationalist operas, all of which remain in the repertory. They established him as the first Czech nationalist composer as well as the most important Czech opera composer of the generation who came to prominence in the 1860s .


Music of the Romantic Era