Regensburg is a city in eastern Bavaria, at the confluence of the Danube, Naab and Regen rivers. It is capital of the Upper Palatinate subregion of the state in the south of Germany. With more than 150,000 inhabitants, Regensburg is the fourth-largest city in the State of Bavaria after Munich, Nuremberg and Augsburg. From its foundation as an imperial Roman river fort, the city has been the political, economic and cultural centre of the surrounding region. Later, during portions of the Holy Roman Empire rule it housed the Perpetual Diet of Regensburg. The medieval centre of the city is a UNESCO World Heritage Site. In 2014, Regensburg was among the top sights and travel attractions in Germany.

The first settlements in Regensburg date from the Stone Age. The Celtic name Radasbona was the oldest given to a settlement near Regensburg. Around AD 90, the Romans built a fort there. In 179, a major new Roman fort, called Castra Regina ("fortress by the river Regen"), was built for Legio III ''Italica'' during the reign of Emperor Marcus Aurelius. It was an important camp at the most northerly point of the Danube; it corresponds to what is today the core of Regensburg's Old City or ''Altstadt'' east of the Obere and Untere Bachgasse and west of the Schwanenplatz. It is believed that as early as in late Roman times the city was the seat of a bishop, and St Boniface re-established the Bishopric of Regensburg in 739. From the early 6th century, Regensburg was the seat of a ruling family known as the Agilolfings. From about 530 to the first half of the 13th century, it was the capital of Bavaria. Regensburg remained an important city during the reign of Charlemagne. In 792, Regensburg hosted the ecclesiastical section of Charlemagne's General Assembly, the bishops in council who condemned the heresy of adoptionism taught by their Spanish counterparts, Elipandus of Toledo and Felix of Urgell. After the partition of the Carolingian Empire in 843, the city became the seat of the Eastern Frankish ruler, Louis II the German. Two years later, fourteen Bohemian princes came to Regensburg to receive baptism there. This was the starting point of Christianization of the Czechs, and the diocese of Regensburg became the mother diocese of that of Prague. These events had a wide impact on the cultural history of the Czech lands, as they were consequently part of the Roman Catholic and not the Slavic-Orthodox world. A memorial plate at St John's Church (the alleged place of the baptism) was unveiled a few years ago, commemorating the incident in the Czech and German languages. In 800 the city had 23,000 inhabitants, and by 1000 this had increased to 40,000. On 8 December 899 Arnulf of Carinthia, descendant of Charlemagne, died at Regensburg. In 1096, on the way to the First Crusade, Peter the Hermit led a mob of crusaders that attempted to force the mass conversion of the Jews of Regensburg and killed all those who resisted.

Between 1135 and 1146, the Stone Bridge across the Danube was built at Regensburg. This bridge opened major international trade routes between northern Europe and Venice, and this began Regensburg's golden age as a residence of wealthy trading families. Regensburg became the cultural centre of southern Germany and was celebrated for its gold work and fabrics.

In 1245 Regensburg became a Free Imperial City and was a trade centre before the shifting of trade routes in the late Middle Ages. In 1486, Regensburg became part of the Duchy of Bavaria, but its independence was restored by the Holy Roman Emperor ten years later. The first Diet of Regensburg took place in 1541. The city adopted the Protestant Reformation in 1542 and its Town Council remained entirely Lutheran. From 1663 to 1806, the city was the permanent seat of the Imperial Diet of the Holy Roman Empire, which became known as the Perpetual Diet of Regensburg. Thus, Regensburg was one of the central towns of the Empire, attracting visitors in large numbers. 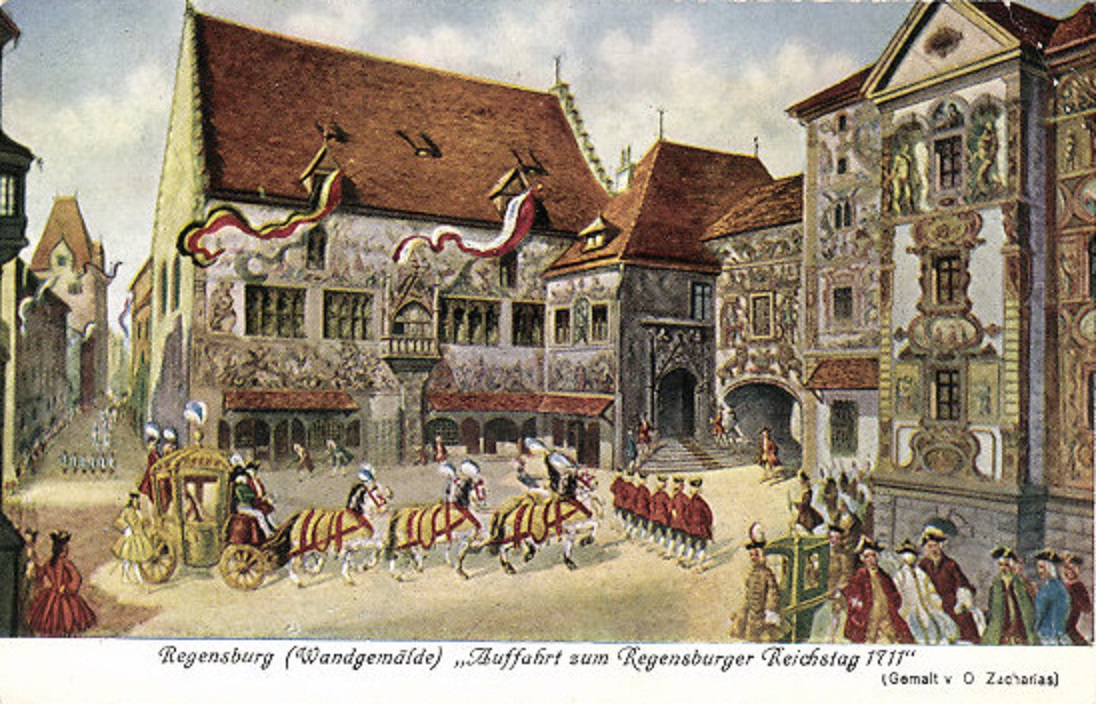 A minority of the population remained Roman Catholic, and Roman Catholics were denied civic rights ('). Although the Imperial city had adopted the Reformation, the town remained the seat of a Roman Catholic bishop and several abbeys. Three of these, St. Emmeram, Niedermünster and Obermünster, were free imperial estates within the Holy Roman Empire, meaning that they were granted a seat and a vote at the Imperial Diet ('). So there was the unique situation that the town of Regensburg comprised five independent "states" (in terms of the Holy Roman Empire): the Protestant city itself, the Roman Catholic bishopric, and the three monasteries. In addition, it was seen as the traditional capital of the region Bavaria (not the state), acted as functional co-capital of the Empire (second to the Emperor's court at Vienna) due to the presence of the Perpetual Diet, and it was the residence of the Emperor's Commissary-Principal to the same diet, who with one very brief exception was a prince himself (for many years the Prince of Thurn and Taxis, still resident in the town).

In 1803 the city lost its status as an imperial city following its incorporation into the Principality of Regensburg. It was handed over to the Archbishop-Elector of Mainz and Archchancellor of the Holy Roman Empire Carl von Dalberg in compensation for the territory of the Electorate of Mainz located on the left bank of the Rhine which had been annexed by France under the terms of the Treaty of Lunéville in 1801. The Archbishopric of Mainz was formally transferred to Regensburg. Dalberg united the bishopric, the monasteries, and the town itself, making up the Principality of Regensburg (''Fürstentum Regensburg''). Dalberg strictly modernized public life. Most importantly, he awarded equal rights to Protestants and Roman Catholics alike. In 1810 Dalberg ceded Regensburg to the Kingdom of Bavaria, he himself being compensated by the award of Fulda and Hanau to him under the title of "Grand Duke of Frankfurt". Between April 19 and April 23, 1809, Regensburg was the scene of the Battle of Ratisbon between forces commanded by Henri Gatien Bertrand and Napoleon himself and the retreating Austrian forces. The city was eventually overrun, after supplies and ammunition ran out. The city suffered severe damage during the fight, with about 150 houses being burnt and others being looted. Robert Browning's poem ''Incident at the French Camp'' describes the battle from the French perspective, but is filled with historical errors. 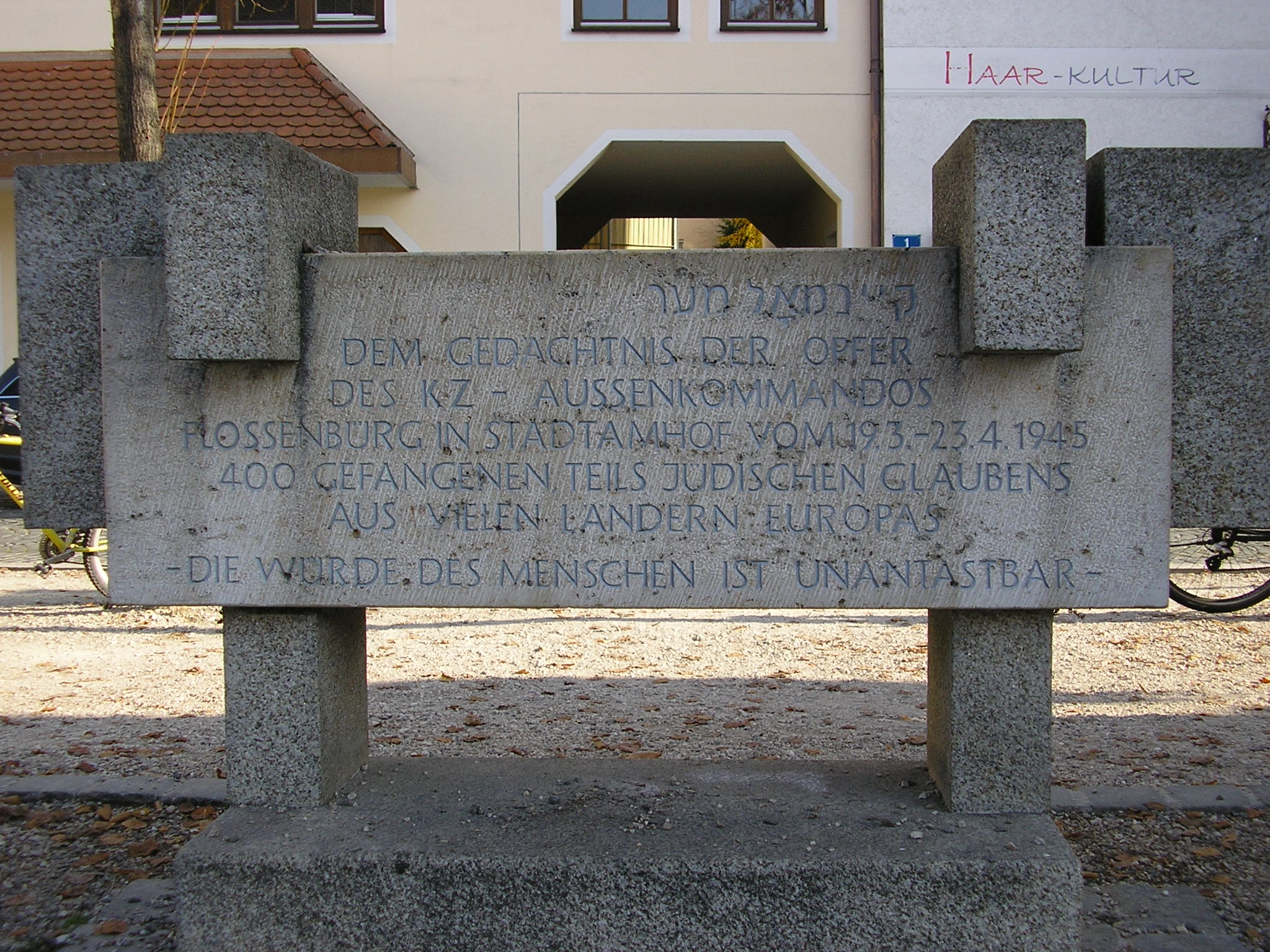 The Jewish community was persecuted after the Nazi Party came to power in Germany in 1933, many Jews fled in the following years, and some were also expelled to Poland, however, thanks to a Polish-German agreement they were allowed to return to the city. On November 9, 1938, during the Kristallnacht, the Regensburg Synagogue and several Jewish homes and stores were destroyed, and around 220 Jews were arrested, some were also deported to the Dachau concentration camp.