Saif ad-Din Qutuz ( ar|سيف الدين قطز; died 24 October 1260), also romanized as Kutuz, Kotuz, and fully al-Malik al-Muẓaffar Sayf ad-Dīn Quṭuz (), was a military leader and the third or fourth of the Mamluk Sultans of Egypt in the Turkic line. He reigned as Sultan for less than a year, from 1259 until his assassination in 1260. Sold into slavery in Egypt, he rose to vice-Sultan over 20 years, becoming the power behind the throne. He was prominent in defeating the Seventh Crusade, which invaded Egypt in 1249–50. When Egypt was threatened by the Mongols in 1259 he took the lead militarily and then deposed the reigning Sultan, 15-year-old Sultan Al-Mansur Ali. The centers of Islamic power in Syria and Baghdad were conquered by the Mongols, and the center of the Islamic Empire transferred to Egypt, which became their next target. Qutuz led an Egyptian Mamluk army north to confront the Mongols, having made a pact with Egypt's long-time enemy the Crusaders. The Battle of Ain Jalut was fought on 3 September 1260 in southeastern Galilee, between the Egyptian Mamluk army and the Mongols. The Mongols were crushingly defeated by Qutuz's forces, in what has been considered a historical turning point. Qutuz was assassinated by a fellow Mamluk leader, Baibars, on the triumphant return journey to Cairo. Although Qutuz's reign was short, he is one of the most popular Mamluk sultans in the Islamic world and holds a high position in Islamic history.

Qutuz was a Turkic prince from Iran. Captured by the Mongols during the fall of Khwarazmian dynasty , he was taken to Damascus, Syria where he was sold to an Egyptian slave merchant who then sold him to Aybak, the Mamluk sultan in Cairo. According to some sources, Qutuz claimed that his original name was Mahmud ibn Mamdud and he was descended from Ala ad-Din Muhammad II, a ruler of the Khwarezmian Empire. 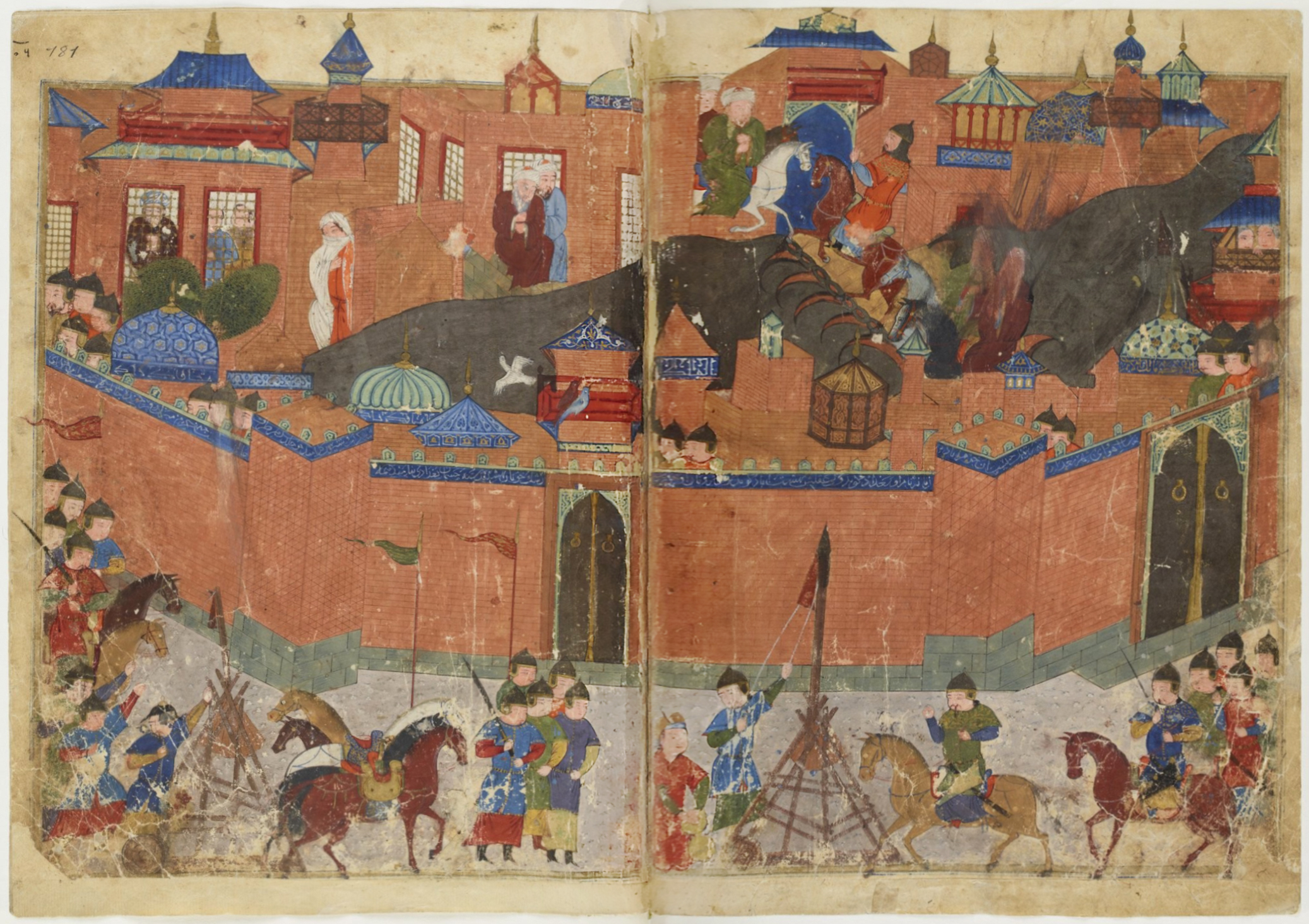 He became the most prominent Mu'izi Mamluk of Sultan Aybak and he became his vice-Sultan in 1253. Aybak was assassinated in 1257 and Qutuz remained vice-Sultan for Aybak's son al-Mansur Ali. Qutuz led the Mu'izi Mamluks who arrested Aybak's widow Shajar al-Durr and installed al-Mansur Ali as the new Sultan of Egypt. In November 1257 and April 1258 he defeated raids of the forces of al-Malik al-Mughith of Al Karak which were supported by the Bahriyya Mamluks and included Shahrzuri Kurds. The raids caused a dispute among the Bahriyya Mamluks in Al Karak as some of them wanted to support their followers in Egypt. In February 1258, the Mongol army sacked Baghdad, massacred its inhabitants and killed the Abbasid Caliph Al-Musta'sim. It then advanced towards Syria which was ruled by the Ayyubid king an-Nasir Yusuf, who received a threatening letter from Hulagu. Vice-Sultan Qutuz and the Egyptian Emirs were alarmed by a message from an-Nasir Yusuf in which he appealed for immediate help from Egypt. The emirs assembled at the court of the 15-year-old Sultan Al-Mansur Ali and Qutuz told them that because of the seriousness of the situation, Egypt should have a strong and a capable Sultan who could fight the Mongols. On 12 November 1259, Al-Mansur Ali was deposed by Qutuz. When Qutuz became the new sultan, he promised the emirs that they could install any other sultan after he defeated the Mongols. Qutuz kept Emir Faris ad-Din Aktai al-Mostareb as the Atabeg of the Egyptian army and began to prepare for battle.

Hulagu and his forces were proceeding towards Damascus, where some of the Syrian emirs suggested to an-Nasir Yusuf to surrender and submit to Hulagu as the best solution to save themselves and Syria. The Mamluk Baibars, who was present at the meeting, was upset by the suggestion, and the Mamluks decided to kill an-Nasir Yusuf that night. However, he managed to escape with his brother to the citadel of Damascus. Baibars and the Mamluks then left Syria, travelling to Egypt where they were warmly welcomed by Sultan Qutuz, who granted Baibars the town of Qalyub. When an-Nasir Yusuf heard that the Mongol army was approaching Aleppo, he sent his wife, his son and his money to Egypt. The population of Damascus and other Syrian towns began to flee. After besieging Aleppo for seven days, the Mongols sacked it and massacred its population. When an-Nasir Yusuf heard about the fall of Aleppo he fled towards Egypt, leaving Damascus with its remaining population defenseless, but Qutuz denied him entry. Yusuf thus stayed on the border of Egypt, while his Emirs deserted him to proceed into the country. Sultan Qutuz ordered the seizing of the an-Nasir Yusuf's jewelry and money, which were sent to Egypt with his wife and servants. Sixteen days after the fall of Aleppo to the Mongols, Damascus surrendered without a fight. Yusuf was taken prisoner by the Mamluks and sent to Hulagu. With the centers of Islamic power in Syria and Baghdad conquered, the center of the Islamic Empire transferred to Egypt, and became Hulagu's next target. Hulagu sent messengers to Cairo with a threatening letter, urging Qutuz to surrender and submit to the Mongols. Qutuz's response was to execute the messengers. They were sliced in half, and their heads were mounted on the gate at Bab Zuweila in Cairo. Then, rather than waiting for the Mongols to attack, Qutuz decided to raise an army to engage them away from Egypt. Others fled the area. Moroccans who resided in Egypt fled westward, while Yemenis escaped to Yemen and Hejaz. Qutuz went to Al-Salihiyya and assembled his commanders to decide when to march to the Mongols. But the Emirs showed timidity. Qutuz shamed them into joining him, with the statement, "Emirs of the Muslims, for some time now you have been fed by the country treasury and you hate to be invaded. I will go alone and who likes to join me should do that and who does not like to join me should go back home, but who will not join will carry the sin of not defending our women." Qutuz ordered Baibars to lead a force to Gaza to observe the small Mongol garrison there, which Baibars easily defeated. After spending a day in Gaza, Qutuz led his army along the coast towards Acre, a remnant of the Kingdom of Jerusalem Crusader state. The Crusaders were traditional enemies of the Mamluks, and had been approached by the Mongols about forming a Franco-Mongol alliance. However, that year the Crusaders recognized the Mongols as the greater threat. Qutuz suggested a military alliance with the Crusaders against the Mongols, but the Crusaders opted to stay neutral between the two forces. They did, however, allow Qutuz and his forces to travel unmolested through Crusader territory, and to camp for re-supply near the Crusader stronghold of Acre. Qutuz and his army stayed there for three days, until they heard that the Mongols had crossed the Jordan River, at which point Qutuz and Baibars led their forces to meet the Mongols at Ain Jalut.

The battle of Ain Jalut which was fought on 3 September 1260 was one of the most important battles and a turning point in history. In 1250, only ten years before the battle of Ain Jalut, the same Bahariyya Mamluks (Qutuz, Baibars and Qalawun) led Egypt against the Seventh Crusade of King Louis IX of France. The Mongol army at Ain Jalut that was led by Kitbuqa, a Nestorian Christian Naiman Turk, was accompanied by the Christian king of Cilician Armenia and by the Christian prince of Antioch. After the fall of Khawarezm, Baghdad and Syria, Egypt was the last citadel of Islam in the Middle East, and the existence of crusade beach-heads along the coast of the Levant were forming a serious menace to the Islamic World. Therefore, the future of Islam and of the Christian west as well depended on the outcome of that battle which was fought between two of the most powerful fighters of the Middle Ages, the Mamluks and the Mongols accompanied by some Christian crusaders. Baibars, who was known to be a swift commander, led the vanguard and succeeded in his maneuver and lured the Mongol army to the Ain Jalut where the Egyptian army led by Qutuz waited. The Egyptians at first failed to counter the Mongol attack and were scattered after the left flank of their army suffered a severe damage but Qutuz stood firm, he threw his helmet to the air and shouted "O Islam" and advanced towards the damaged side followed by his own unit. The Mongols were pushed back and fled to a vicinity of Bisan followed by Qutuz's forces but they managed to gather and returned to the battlefield making a successful counterattack. Qutuz cried loudly three times "O Islam! O God grant your servant Qutuz a victory against the Mongols". The Mongols with their Christian and Muslim allies were totally defeated by Qutuz' army and fled to Syria where they became a prey for the local population. Qutuz kissed the ground and prayed while the soldiers collected the booty. Kitbuqa the Commander of the Mongol army was killed and his head was sent to Cairo. This was the first defeat suffered by the Mongols since they attacked the Islamic world. They fled from Damascus then from the whole of the northern Levant. Qutuz entered Damascus with his army and sent Baibars to Homs to liquidate the remaining Mongols. While Alam ad-Din Sonjar was nominated by Qutuz as the sultan's deputy in Damascus, Qutuz granted Aleppo to al-Malik al-Said Ala'a ad-Din the Emir of Mosul and a new Abbasid Caliph was about to be installed by Qutuz. All of the Levant from the border of Egypt to the river Euphrates was freed from the Mongols. After this victory the Mamluks stretched their sovereignty to the Levant and were recognized by the Ayyubids and the others as legitimate rulers. When Hulagu heard about the defeat of the Mongol Army he executed an-Nasir Yusuf near Tabriz. Hulagu kept threatening the Mamluk Sultanate, but soon he was struck hard by conflicts with the Mongols of the Golden Horde, in the western half of the Eurasian Steppe, who converted to Islam (see Berke–Hulagu war). Hulagu died in 1265. He never would avenge the defeat of the Mongols at Ain Jalut. The Battle of Ain Jalut is also notable for being the earliest known battle where explosive hand cannons (''midfa'' in Arabic) were used. These explosives were employed by the Mamluk Egyptians in order to frighten the Mongol horses and cavalry and cause disorder in their ranks. The explosive gunpowder compositions of these cannons were later described in Arabic chemical and military manuals in the early 14th century.

On his way back to Cairo, Qutuz was assassinated in Salihiyah. According to both modern and medieval Muslim historians Baibars was involved in the assassination, according to Al-Maqrizi, who also believed that Baibars was involved, the Emirs who actually struck down Qutuz were Emir Badr ad-Din Baktut, Emir Ons, and Emir Bahadir al-Mu'izzi. Western historians include Baibars in the conspiracy and, indeed, assign him direct responsibility. Muslim chroniclers from the Mamluk era stated that Baibars' motivation was either to avenge the killing of his friend and leader of the Bahariyya Faris ad-Din Aktai during Sultan Aybak's reign or due to Qutuz granting Aleppo to al-Malik al-Said Ala'a ad-Din the Emir of Mosul, instead of to him as he had promised him before the battle of Ain Jalut. Qutuz was first buried in the town of Al-Qusair and then reburied in a cemetery in Cairo. Baibars returned to Cairo which was decorated and celebrating the victory over the Mongols, where he became the new Sultan. Baibars was at once admired by the people as he revoked the war taxes which had been imposed by Qutuz.

* List of rulers of Egypt * Mosque of Amr ibn al-As