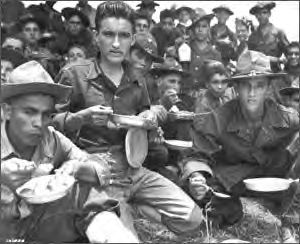 Before the United States entered World War II Puerto Ricans were already fighting on European soil in the Spanish Civil War. The Spanish Civil War was a major conflict in Spain that started following an attempted ''coup d'état'' committed by parts of the army, led by the Nationalist General Francisco Franco, against the government of the Second Spanish Republic. Puerto Ricans fought on behalf of both of the factions involved, the "Nationalists" as members of the Spanish Army and the "Loyalists" (Republicans) as members of the Abraham Lincoln International Brigade. Among the Puerto Ricans who fought alongside General Franco on behalf of the Nationalists was General Manuel Goded Llopis (1882–1936), a high-ranking officer in the Spanish Army. Llopis, who was born in San Juan, was named Chief of Staff of the Spanish Army of Africa, after his victories in the Rif War, took the Balearic Islands and by order of Franco, suppressed the rebellion of Asturias. Llopis was sent to lead the fight against the Anarchists in Catalonia, but his troops were outnumbered. He was captured and was sentenced to die by firing squad.

Among the many Puerto Ricans who fought on behalf of the Second Spanish Republic as members of the Abraham Lincoln Brigade, was Lieutenant Carmelo Delgado Delgado (1913–1937), a leader of the Puerto Rican Nationalist Party from Guayama who upon the outbreak of the Spanish Civil War was in Spain in pursuit of his law degree. Delgado was an anti-fascist who believed that the Spanish Nationalists were traitors. He fought in the Battle of Madrid, but was captured and was sentenced to die by firing squad on April 29, 1937; he was amongst the first US citizens to die in that conflict. In 1937, Japan invaded China and in September 1939, Germany invaded Poland. In October 1940, the 295th and 296th Infantry Regiments of the Puerto Rican National Guard, founded by Major General Luis R. Esteves, were called into Federal Active Service and assigned to the Puerto Rican Department in accordance with the existing War Plan Orange. During that period of time, Puerto Rico's economy was suffering from the consequences of the Great Depression, and unemployment was widespread. Unemployment was one of the reasons that some Puerto Ricans chose to join the Armed Forces. Most of these men were trained in Camp Las Casas in Santurce, Puerto Rico, and were assigned to the 65th Infantry Regiment, a segregated unit made up mostly of White Puerto Ricans. The rumors of war spread, and the involvement of the United States was believed to be a question of time. The 65th Infantry was ordered to intensify its maneuvers, many of which were carried out at Punta Salinas near the town of Salinas in Puerto Rico. Those who were assigned to the 295th and 296th regiments of the Puerto Rican National Guard received their training at Camp Tortuguero near the town of Vega Baja. 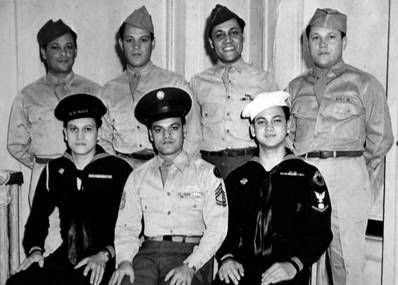 There weren't any Puerto Rican military related fatalities when the Imperial Japanese Navy Air Service attacked Pearl Harbor. However, there was one civilian Puerto Rican fatality. Daniel LaVerne was a Puerto Rican amateur boxer who was working at Pearl Harbor's Red Hill underground fuel tank construction project when the Japanese attacked Pearl Harbor. He died as a result of the injuries which he received during the attack. His name is listed among the 2,338 Americans killed or mortally wounded on December 7, 1941, in the Remembrance Exhibit in the back lawn of the USS Arizona Memorial Visitor Center at Pearl Harbor. After the Japanese attack on Pearl Harbor and the entry of the U.S. into the war, the Puerto Ricans living on the island and on the U.S. mainland began to fill the ranks of the four major branches of the Armed Forces. Some volunteered for patriotic reasons, some joined in need of employment, and others were drafted. Some families had multiple members join the Armed Forces. Seven brothers of the Medina family known as "The fighting Medinas", fought in the war. They came from Rio Grande, Puerto Rico and Brooklyn, New York. In some cases Puerto Ricans were subject to the racial discrimination which at that time was widespread in the United States. In 1943, there were approximately 17,000 Puerto Ricans under arms, including the 65th Infantry Regiment and the Puerto Rico National Guard. The Puerto Rican units were stationed either in Puerto Rico or in the Virgin Islands. On December 8, 1941, when Japanese planes attacked the U.S. military installations in the Philippines, Col. Virgilio N. Cordero was the Battalion Commander of the 31st Infantry Regiment. The 31st Infantry covered the withdrawal of American and Philippine forces to the Bataan Peninsula and fought for four months, despite the fact that no help could come in from the outside after much of the United States Pacific Fleet was destroyed at Pearl Harbor and mid-ocean bases at Guam and Wake Island were lost. Cordero was named Regimental Commander of the 52nd Infantry Regiment of the new Filipino Army, thus becoming the first Puerto Rican to command a Filipino Army regiment. The Bataan Defense Force surrendered on April 9, 1942, and Cordero and his men underwent torture and humiliation during the Bataan Death March and nearly four years of captivity. Cordero was one of nearly 1,600 members of the 31st Infantry who were taken as prisoners. Half of these men perished while prisoners of the Japanese forces. Cordero gained his freedom when the Allied troops defeated the Japanese in 1945. France's possessions in the Caribbean began to protest against the Vichy government in France, a government backed by the Germans who invaded France. The island of Martinique was on the verge of civil war. The United States organized a joint Army–Marine Corps task force, which included the 295th Infantry (minus one battalion) and the 78th Engineer Battalion, both from Puerto Rico for the occupation of Martinique. The use of these infantry units was put on hold because Martinique's local government decided to turn over control of the colonies to the French Committee of National Liberation.

A small detachment of insular troops from Puerto Rico was sent to Cuba in late March as a guard for Batista Field. In 1943, the 65th Infantry was sent to Panama to protect the Pacific and the Atlantic sides of the isthmus. An increase in the Puerto Rican induction program was immediately authorized and continental troops such as the 762nd, 766th, and the 891st Antiaircraft Artillery Gun Battalions, were replaced by Puerto Ricans in Panama. They also replaced troops in bases on British West Indies as well, to the extent permitted by the availability of trained Puerto Rican units. The 295th Infantry Regiment followed the 65th Infantry in 1944, departing from San Juan, Puerto Rico, to the Panama Canal Zone. Among those who served with the 295th Regiment in the Panama Canal Zone was a young Second Lieutenant by the name of Carlos Betances Ramírez, who would later become the only Puerto Rican to command a Battalion in the Korean War. On November 25, 1943, Colonel Antulio Segarra, proceeded Col. John R. Menclenhall as Commander of the 65th Infantry, thus becoming the first Puerto Rican Regular Army officer to command a Regular Army regiment.